Good Friday. I am in no way religious, but the prospect of a four-day weekend in prime migrant-hunting conditions was exhilarating. The weather had been good for migrants all week and four days off in a row meant I could put some serious effort into both east AND west Cork. With that kind of time, the odds were favourable for finding something good.

I started out early on Friday morning at Ballycotton. It was quite a dull and foggy morning, with a cool breeze coming off the sea. Lots of Whimbrel were moving through noisily, and a surprise Little Tern was feeding in the lake at high tide — always a good bird for Cork and a sign of fresh birds having arrived in. I then moved on to Ballyvergan reedbed at Youghal for my weekly scan over the area, ever hopeful for that self-found Purple Heron. Lots of Swallows were moving through the mist over the reeds, and my thoughts turned to searching, and hoping, for a Red-rumped Swallow.

At about 11:15am, tracking a group of Swallows in my bins, I was suddenly faced with a ghostly pale bird gliding towards me — so pale, in fact, that for a split second I thought I had a Short-eared Owl. It quickly banked, revealing a dainty-looking ringtail harrier...with dark secondaries! The bird flew quickly west, with a light, bouncy, tern-like flight, until it was again obscured by mist and then flew behind a line of trees. I texted my brother, who was birding in Wexford, and informed him I had just had a very strange harrier.

At this point I was sure I had, at the very least, an odd Montagu's Harrier, but was strongly leaning towards Pallid. The collar present on the bird, even visible through the bins, was very impressive. The question I continued to run around my head was "If you had seen that in Cyprus or Turkey, would you have thought twice about it being Pallid?" — something I re-iterated to local birders on the phone later in the day. But I was not in Cyprus or Turkey, I was in Ireland.

The next few hours were exceptionally frustrating. The bird was hunting the entire area of Ballyvergan Reedbed, a very large catchment of reeds, scrub, marsh and fields, interspersed with mature bushes and trees. This meant that the bird was often obscured, appearing at intervals of every 45–50 minutes, usually at the opposite end of the reedbed to where I was viewing from. Attempts to intercept the bird at various vantage points around Ballyvergan all failed. I would view from the beach, the bird would be at the hide end of the marsh. If I viewed from the hide, it would be at the beach end. If I waited for long periods at either end, it would remain, on view at the other end. It was toying with me, until a point at about 1:30pm, when, as I stood on top of the old hide, the bird made a very close pass by me in the mist. The collar and the facial pattern struck me like a bolt from on high, as did the darkness of the secondaries on the underwing and the lack of markings on the axillaries and coverts typical of Montagu's. Surely this was a Pallid Harrier! It would have to be a very unusual Hen or Monty's to look this distinct. The bird was clearly a first-summer/second-calendar-year type, a plumage I had never seen before. But the bird's sheer speed and the misty conditions made seeing other critical features difficult.

The bird rapidly made its way to the far end of the reedbed, where it was mobbed by two Hooded Crows. It then began to soar high, showing a very pointed, four-fingered wing structure, and made its way, worryingly, over the hill.

Was the bird gone?

Having called Denis O'Sullivan in the hopes he had a Forsman guide at home (sadly he did not), I raced back to Ballycotton where I called into a friend, Phil Davis, to use his computer for some research. First-summer harriers were quickly Googled and again my perceptions on the bird were reinforced. Without access to Forsman I was still confident, and called photographer Rónán McLaughlin to see whether he was available for a photography mission. When I informed him of my suspicions he naturally came running. The words Pallid Harrier cause even the best of men to abandon their wives and families. Paul Moore, who had telepathically gleamed the rumour of an interesting harrier at Ballyvergan, then called me and said he would join us with some literature at the hide.

I met Rónán back at the hide at around 3:15pm and we waited the bird out. At about 3:45pm the fog magically lifted...and the bird appeared, distantly, but as ghostly looking as before, at the far end of the reedbed. Paul Moore arrived at that moment, and the three of us waited for the bird to approach closer. 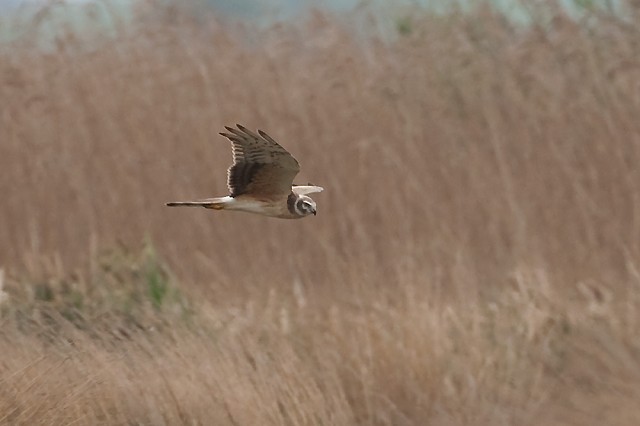 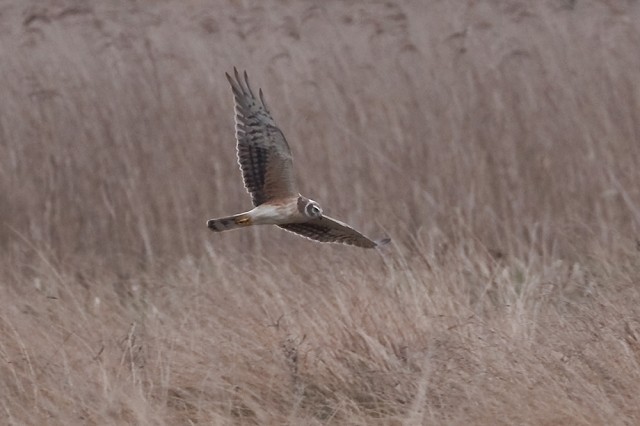 It didn't take long. The bird began to make its way directly at us, and with the fog no longer an issue we were soon very excited about this bird, the excitement increasing rapidly with every metre the 'ghost' approached closer. Even at distance, some obvious features were now more apparent in the good light. Structurally and jizz-wise it was very much a Pallid Harrier. It made the distance towards us in no time, and banked west by the hide as Rónán rattled off some crucial shots, whilst myself and Paul exclaimed at the prominence of the bird's collar, facial pattern and secondaries. The bird did its disappearing act again, and we scrutinized the shots on Rónán's camera. 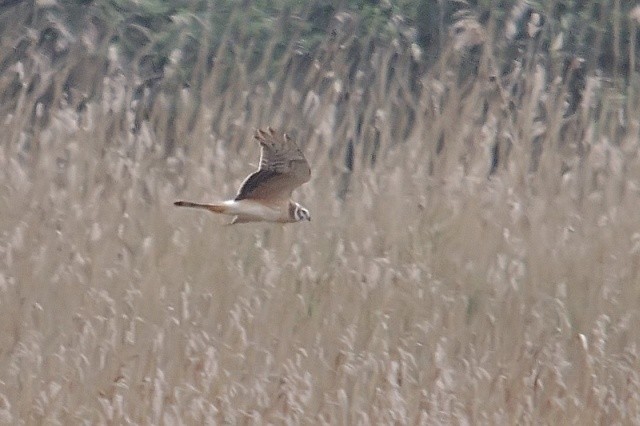 First-summer male Pallid Harrier, Ballyvergan, Co Cork. The first shot of a Pallid Harrier taken in Ireland, and what a shot! This photograph firmly cemented the identification; note the pale-tipped inner primaries, pale 'boomerang' at the base of the primaries and the dark secondaries. (Photo: Rónán McLaughlin.) 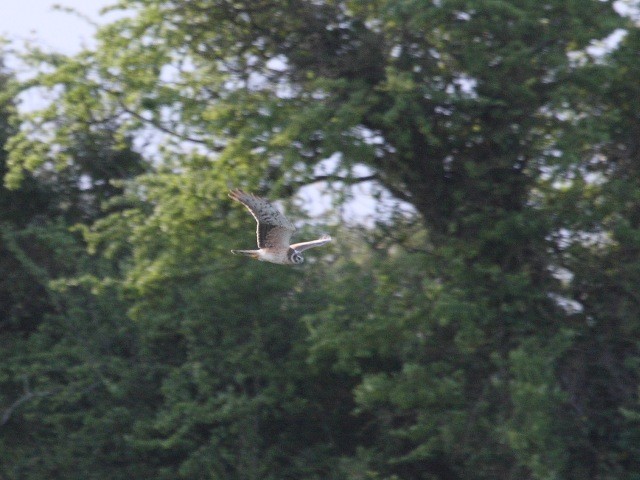 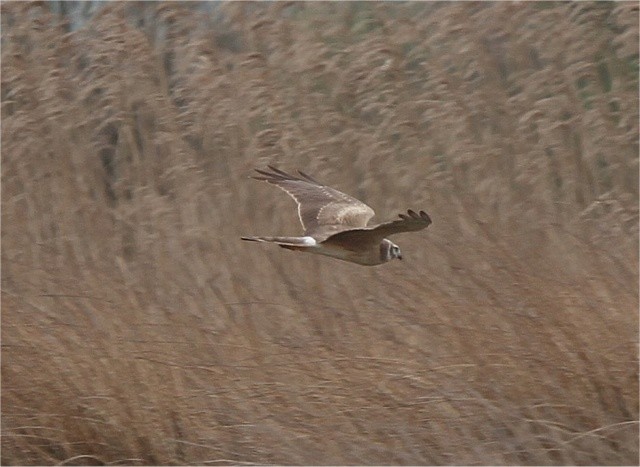 There was little room for doubt — all the features were there! The pale-tipped primaries were clearly visible on the shots, the axillaries were un-barred, the four-fingered wing tip, even the pale 'boomerang' at the base of the primaries, was clearly evident. It was definitely a Pallid Harrier. We had a first for Ireland on our hands and the proof in the bag. Words like "possible" and "probable" quickly evaporated into definitive phone calls in the space of two minutes. We all celebrated on top of this old hide in the middle of the marsh, unable to believe just how stunning a bird it really was. Other birders began to show up at speed.

The bird showed for two more brief periods that evening, with long periods of inactivity between viewings before it went to roost at around 8:20pm. Other good shots were obtained of this incredible ghostly harrier, putting even more icing on the cake and illustrating the sheer beauty of this particular individual (though I am admittedly biased on this one).

The following morning, the bird was picked up early at around 6:30am and gave some good views up until about 8:00am, after which it was seen to drift high over the hills and was lost to view, never to be seen again. Some 25 or so birders connected the first evening, with a further 10 or so the next morning. Sadly, birders arriving after 8:00am dipped, potentially creating a serious blocker for some, though hopefully in years to come more of these 'ghosts' will be found. I for one would certainly go to see more birds like this!

Photographs emerging on the Sunday, taken by John Murphy on the Friday evening, were crucial to the ageing of this bird. They showed a pale iris, indicating a first-summer male. 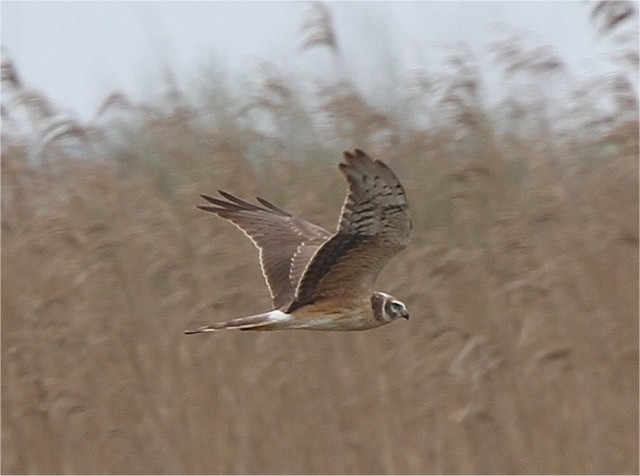 First-summer male Pallid Harrier, Ballyvergan, Co Cork. Note the pale iris. This shot was crucial to the sexing of this bird, being the only one to show the pale iris with certainty. (Photo: John Murphy.)

My deepest thanks to Rónán and Paul for answering the call to duty as quickly as they did, and to Michael John O'Mahony, John Murphy and Ciaran Cronin for their photographs. 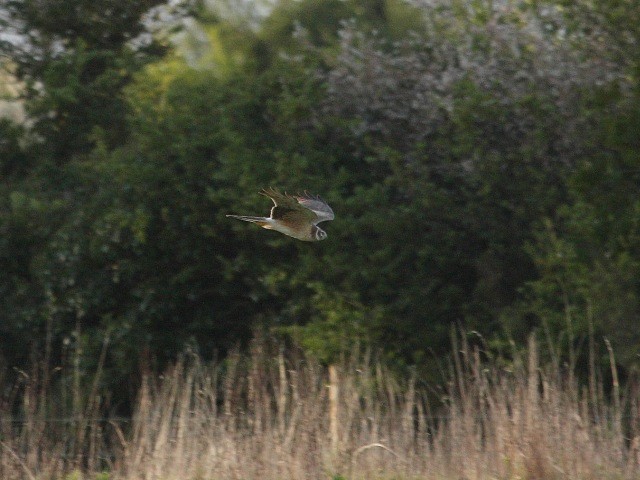