Just after I had lunch on Saturday 20 June, I looked out of my garden window to see if the day had improved as I was planning to go out and set in some flowers I had grown from seed in my greenhouse which were ready to be planted.

I saw a bird hopping around which looked very different from anything I had seen before. I said to my husband "come and look at this bird", but it immediately took flight. I got my camera, though, and put it nearby in case the bird returned. Not having much knowledge of birds, I do like to have a photo.

Fortunately, it came back a few minutes later and I was able to take three photos of it through the window to compare to the illustrations in my copy of the Reader's Digest Birds Of Britain.

After poring through the book, I could not find anything that looked like it, so I went out and started to plant out my flowers. I did see it a couple of times more but got on with what I was doing. 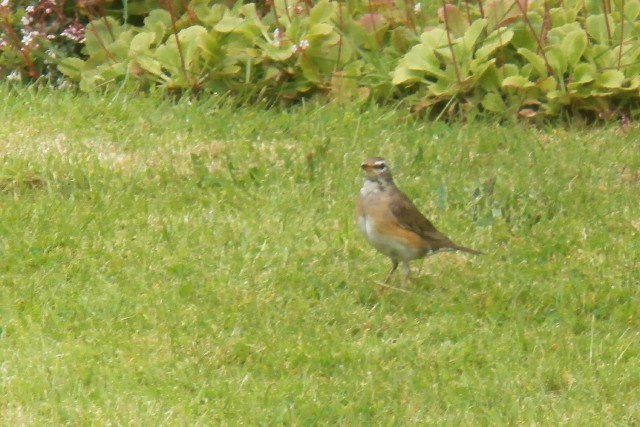 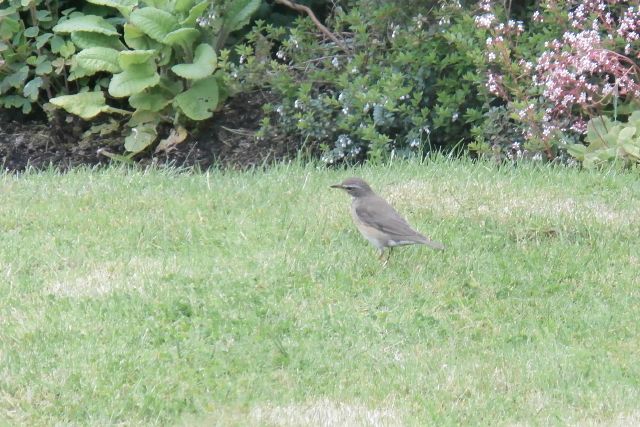 The next day I went into my neighbour's house to see if the bird in the images was in their bird book, but again it wasn't. They suggested we phone Jon Dunn, a friend of theirs who lives on Whalsay and is an avid birdwatcher. He came right away and when I showed him the pictures he got very excited indeed and phoned John Lowrie Irvine, another birdwatcher, and they confirmed it was a very rare bird: an Eyebrowed Thrush.

They phoned to let other birdwatchers know and several arrived by ferry soon after. I showed them the pictures and they all set off to try and find the bird again, but to no avail.

Shetland has its fair share of gales and poor summers, but birds seem to be very happy to visit the shrubs, hedges and trees in my garden, and I have seen quite a few over the years. I think in future I will be taking more interest in trying to identify them sooner rather than later!