As I headed back to Newcastle on the train from Sheffield, I started to plan my four-day trip there visiting my family (from 3–6 November).

I'm a keen photographer who has only recently become interested in wildlife, mainly shooting birds. I recently joined the RSPB, and attended my first trip with my local group in Sheffield to Frampton Marsh RSPB, Lincs. I had a great day out and even managed to get some good photos of the Glossy Ibis.

I am lucky enough that my parents are based in a lovely part of the country just west of Newcastle, in Northumberland in a town called Prudhoe. It was decided that on Friday afternoon we would head up to Bolam Lake CP to walk the dog. I had spent the earlier part of the day photographing a Redwing in the garden and then some Mute Swans and Tufted Ducks at my local pond.

We arrived at Bolam Lake at 2.15 pm with my parents' dog in tow, and spent the next hour walking a loop around the park photographing many Robins with the intention of having my own Christmas Cards printed for family and friends.

At around 3.25 pm, we approached 'Pheasant Meadow' on the north side of the park lake. On top of a hawthorn in the centre of the meadow I spotted a bird. It was positioned almost like an angel would be on top of a Christmas tree. I pointed the bird out to my dad and he viewed it through the binoculars he was carrying, saying that it was some kind of thrush. 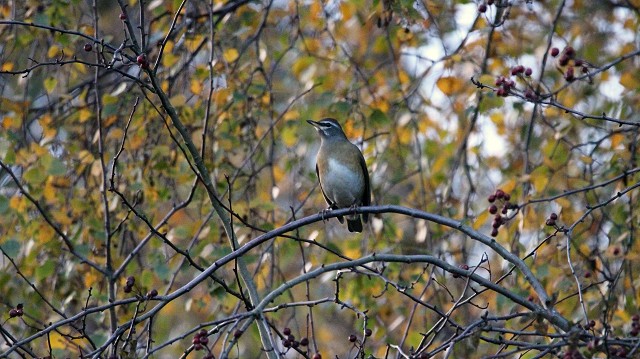 The bird was by itself and wasn't feeding, and the way it was perched looked like it might make a nice image, so I brought my camera up to my eye to fire off a few shots. As I did this the bird flew off to my left slightly and I had to recompose my shot. I managed to get 10 images before it took off south over the lake. My dad noted that the bird also flew like a thrush as it passed over our heads towards the lake.

I then went to review the images on the back of the camera, and it was only then that my dad noticed that he'd never seen a bird like it before. As it had flown off, we decided to finish our loop of the park and then return to the site 10–15 minutes later to see if it had returned. To our good fortune it had, but it was spooked and took off again before we got as close as we had the first time.

With the light fading badly, we decided to call it a day and return home, where I straightaway looked at the bird books I have to try and identify it, but with no luck. I was recently made aware of a group on Facebook that helps with the identification of birds so I posted the photo on that group. It was only then that the enormity of what I had seen became apparent. I had photographed an Eyebrowed Thrush in Britain. 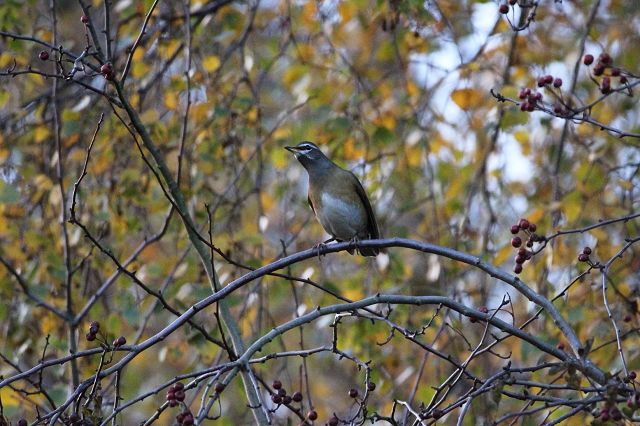 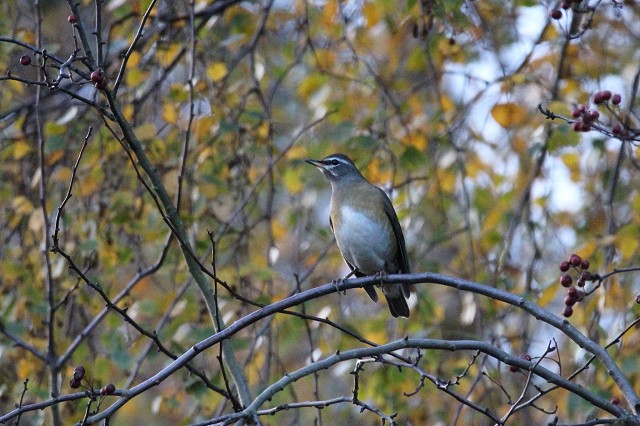 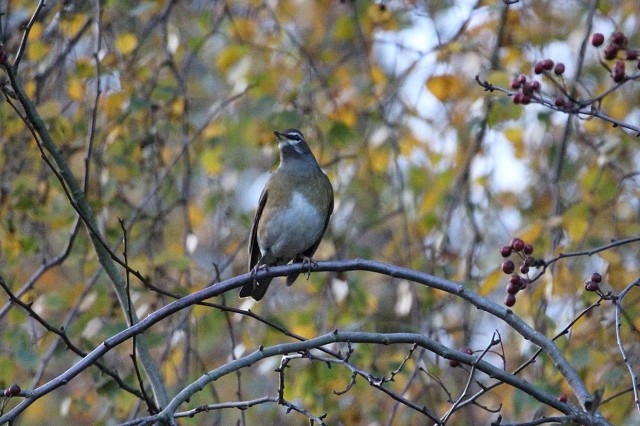 I was immediately inundated with messages asking for the location of my sighting. As I wasn't aware of what I should do in this situation, I contacted Danny Fardell who has recently been helping me after I joined the local RSPB group in Sheffield. He informed me that he'd never reported a rarity before, but that he would make a phone call to someone that would know. He then got back in touch and told me which relevant parties I needed to contact and I did this straight away. He also told me I needed to put the location of the sighting out, as I couldn't suppress a sighting of this magnitude.

As the evening progressed more and more interest was shown and the scale of my find hit me hard. After a few celebratory beers, I retired home and set my alarm for 6.30 am. My dad and I set off at 7 am on Saturday morning so we could arrive at Bolam Lake not long after first light. When we arrived, we were met by well over 50 birders.

As the morning progressed, the weather worsened but it was made better by the joy shown by people about the find. People came and went all morning, and at its peak I think around 100 were there. However, after no sightings I called it a day around 1 pm, with only about a dozen wet and cold birders still on site.

I returned to Sheffield after a crazy few days but I hope that someone is lucky enough to see the bird again, as I understand there are still hundreds of thrushes in the area.