I'm lucky enough to live close to Winterton Dunes SSSI in east Norfolk and, whenever I have the chance, I cycle the few miles from my house to spend some time birding and taking photographs of what I see in the dunes and surrounding countryside. On Thursday 20 August 2020 I had the day off, so I arrived at my favoured northern end of the dunes at approximately 8 am.

There were quite few Sylvia warblers around – I had five Lesser Whitethroats in one bush. At 9 am, my friend and fellow birder Tim Hemmings arrived on his bike and we spent some time birding the area together. It was a warm, sunny morning and not too windy. At approximately 10.25 am, I noticed a small group of mixed hirundines coming over the north wood area: House and Sand Martins and Swallows. Suddenly we noticed a falcon coming east from inland, quite high up, heading for the hirundines. 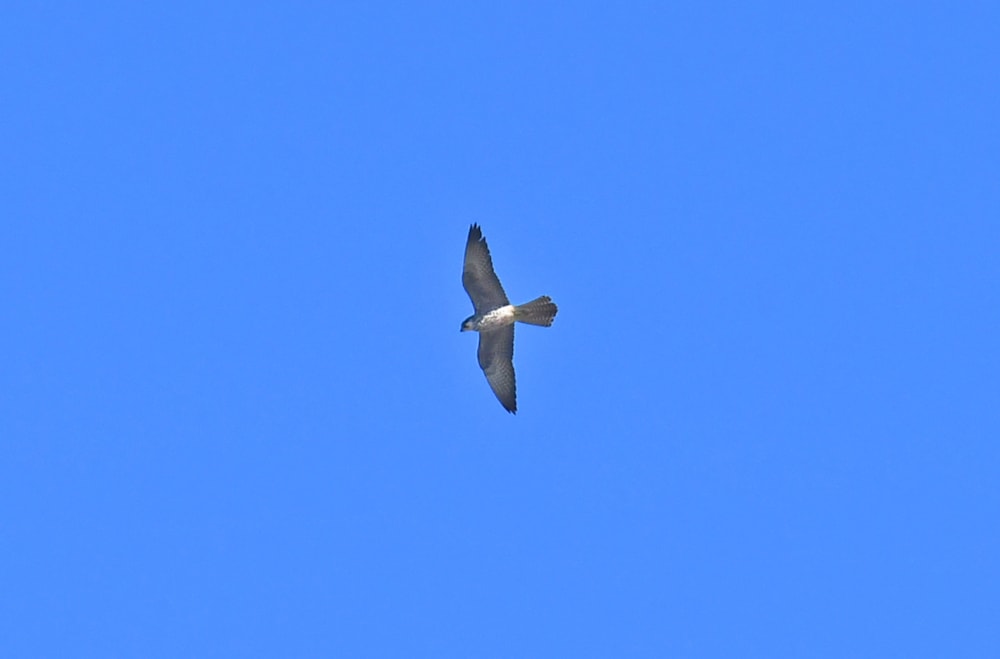 Initial impression of the mystery falcon was that it looked like a small Peregrine Falcon (Mick Davis).

My first thought was that it looked like a small Peregrine Falcon. It went for a hirundine and hunched its wings in, like peregrines do when they are about to stoop, and I could see peregrine-like facial markings. But Peregrine Falcons don't usually go for Swallows, so this was a bit odd! It then turned and looked up and I could see that a Eurasian Hobby was coming in from above – the hobby actually put its claws out to attack the other bird.

I whipped my camera out and started firing away. The mystery falcon 'balled up' in mid-air, and instantly and seemingly effortlessly changed direction to avoid the hobby. By now, both birds were above the dune ridge bordering the beach and they turned back inland. "It can't be a peregrine, it's too small", said one of us – I can't remember who! Then, both birds flew in front of and above us and I managed to get a few more photographs. 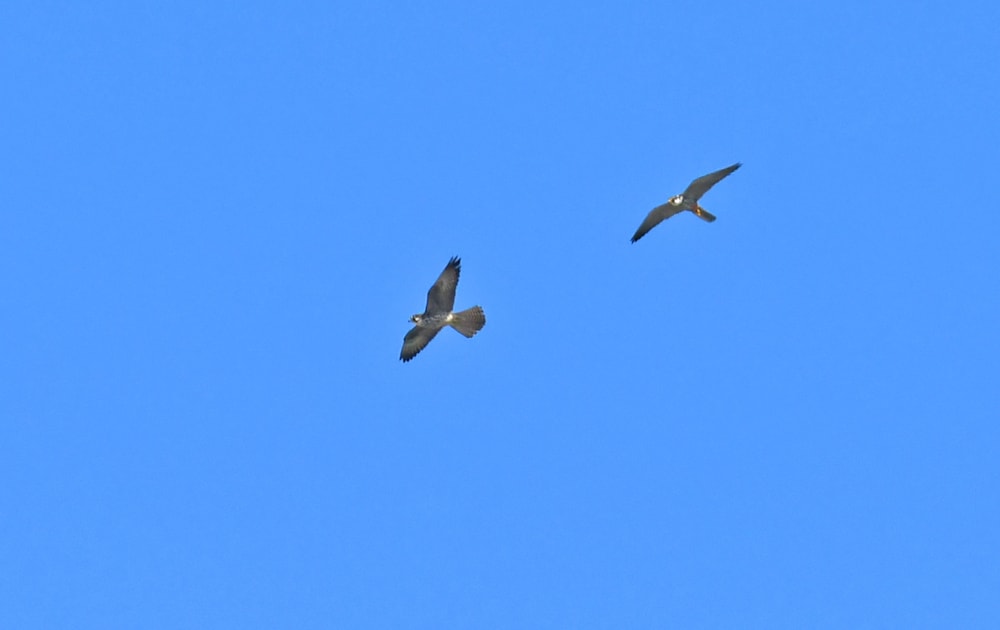 When alongside a Eurasian Hobby, the mystery bird appeared bigger and bulkier, and readily fanned its tail (Mick Davis).

The mystery falcon didn't have the red 'thighs' of Eurasian Hobby. It was larger than the hobby which was with it, and had wider wings and a generally stronger-built appearance. Both Tim and I noticed that the underwings appeared very dark; the dark streaks on the body were narrower and thinner than on a Eurasian Hobby and stopped halfway down the body, rather than covering the entire underside as in a hobby, too. The bird seemed to be using its tail a lot, which was frequently fanned as it manoeuvred, whereas the hobby's tail remained narrow.

Both birds flew inland, side by side, and disappeared over the woods. I was still clicking away with my camera so I can’t say that I noticed any general differences in flight action as they flew away from us, but it was a clearly bigger and stronger looking bird. After they had gone, Tim and I looked at each other. "What do you think?", asked Tim. We were both puzzled. The whole encounter had lasted no more than two minutes and I was still processing it. I really had no idea. Neither Tim or I have ever seen Eleonora's Falcon and it didn't cross our mind at all that the bird we'd seen could be such an amazing rarity. I shook my head. "I dunno, Tim", I replied.

I can't remember exactly how the conversation went after this, but since the birds flew away side by side in a quite companionable way we ended up concluding that we must have seen an adult Eurasian Hobby with a juvenile (a rather large one!) having a squabble. In hindsight, I can't really defend our conclusion, but we were basically stumped. In most years we get adult and juvenile hobbies in this area and they do sometimes squabble. 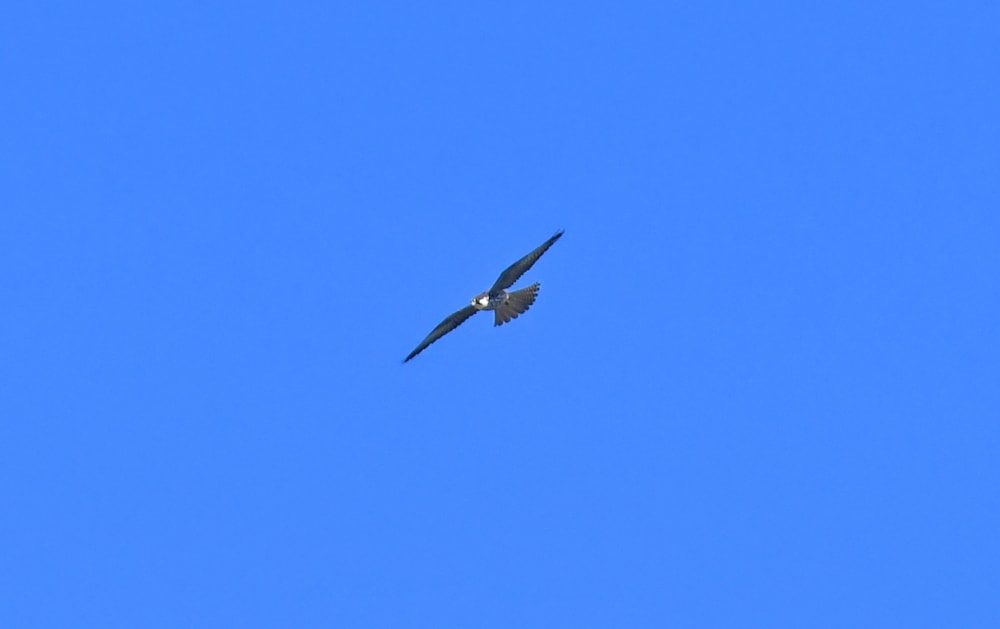 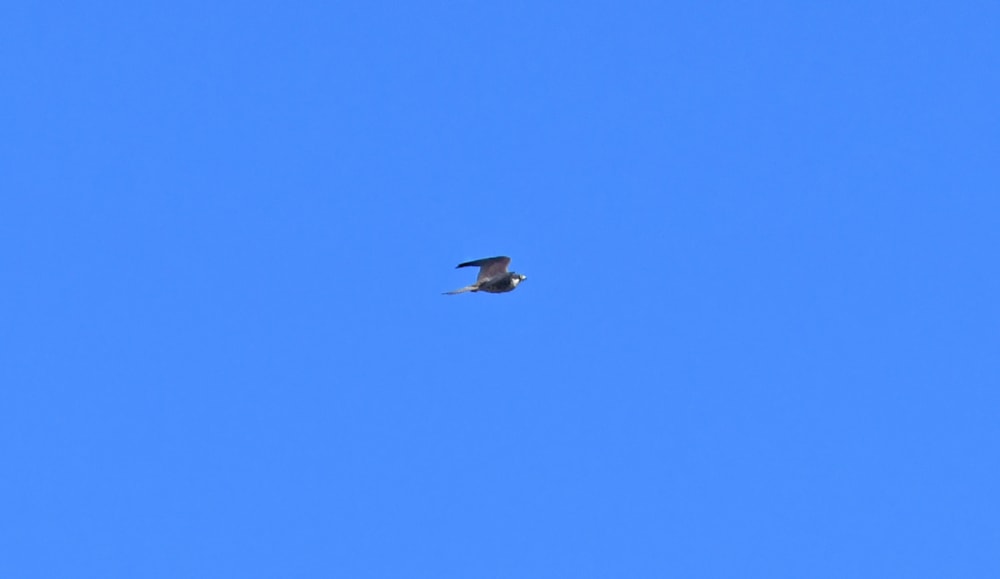 After the excitement, we continued birding at the northern end of the patch, picking up a nice Pied Flycatcher in The Plantation, and then both cycled home. To our embarrassment, neither of us even checked the books – Tim got on with watering his tomatoes and I put out a few pictures on Twitter, naming the birds as hobbies, and then mowed the lawn. It wasn't until 9.30 pm, after a glass of cider and a nap in front of the telly, that my phone started going beserk as various well-known birders started messaging me. I then began to realise quite what had happened – it was an Eleanora's Falcon!

Looking back on the experience I feel a strange mixture of pleasure and embarrassment, and I've definitely learnt a couple of lessons – the most important one being, when in doubt, look at the books. It's not all bad though; I've got quite a few more followers on Twitter now!