Sunday 25 October was the last day of our two-week birding trip to Shetland, split between a week on Fetlar followed by a week on Unst. This was the first birding holiday of any reasonable duration that I had spent in the UK for over 20 years, as I usually spend my holidays overseas. I had always wanted to bird Shetland in the autumn so we had taken advantage of this forced situation to finally spend some time birding the islands.

We had spent the first few hours of the day birding around Skaw and Norwick, before slowly making our way south in order to catch the 12:05 ferry off Unst from Belmont. I was keen to call into Westing, as I had visited the area on previous days, but both times it had been very wet and windy and was keen to see the area on a fine sunny day – in fact probably the nicest weather we had experienced over the entire two weeks.

We parked by the beach at around 10:30 and I decided to have a sausage sandwich before exploring the area. Just as I was opening the boot of the car, I heard an alba-type wagtail call and we both saw a very pale-looking wagtail fly in from the south-west across the bay and land halfway along the pebble beach about 100 m away. Due to the paleness of the mantle and rump, contrasting with the black central tail feathers, I suspected it might be a late White Wagtail rather than a Pied – neither of which I had seen on the trip previously. I decided the bird warranted further attention, but only after I had eaten my sausage sandwiches, a questionable priority in hindsight! Once my second breakfast was complete, I headed down the beach to hopefully confirm my suspicions that it was a White Wagtail. 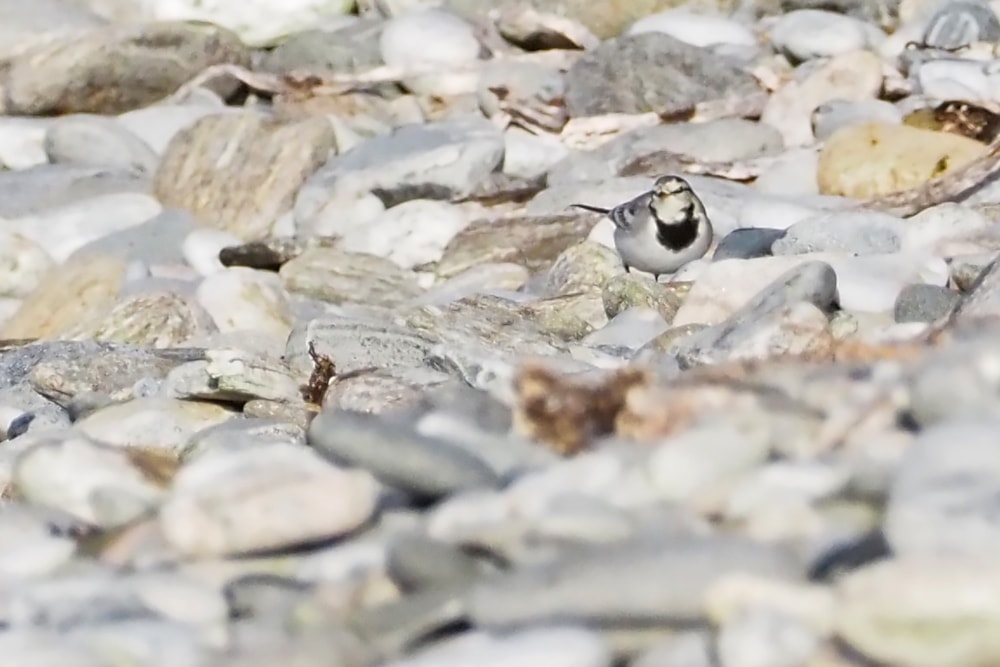 I couldn't see the bird in the area it looked to have landed so carried on checking further down the beach. After a few minutes I picked it up flying around in the distance, at the far end of the beach. The bird gave the impression that it wasn't particularly settled so I decided that despite the distance of around 150 m that I should try and get some record shots, as they may show the rump and uppertail pattern to prove it was a White Wag. Fortunately, it then flew a little closer, and although still distant (100 m), I could now just make out more details on the bird. To my surprise, it showed a thin but distinct black stripe through the eye along with rather un-White Wagtail like wingbars.

The penny now dropped that I was potentially looking at one of the eastern alba wagtails, as I knew that some of these subspecies show such a face pattern. A slight feeling of panic ensued as I realised this could be a good record and that I need to get as many photos as possible. For the next minute or so, it just sat facing me before making another short sally. To my dismay, it took flight and headed back in the direction it had come from. I watched it fly back south-west across the bay towards the low cliffs a few hundred metres away.

I headed back towards the car and asked Linda if she had seen if flying back in her direction, which she had not. Hearing it call distantly, we saw it fly out from behind a rock at the base of the cliffs and then back down and out of sight. We both then watched it fly out again a couple of times pursued by a Rock Pipit, before flying around the headland and out of sight. We spent the next half an hour or so checking the section of coast between the beach, the headland and back along the beach itself before we had to leave to catch our ferry. 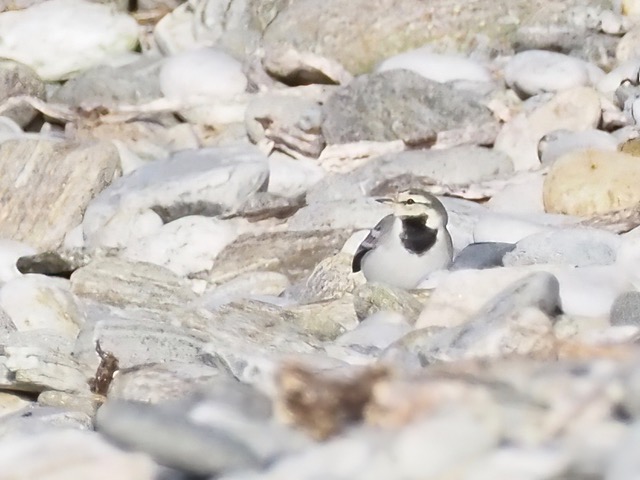 East Siberian Wagtail is one of just two White Wagtail subspecies to show a thin, black stripe through the eye (Mark Sutton).

I took a couple of back of camera images and once we reached the ferry terminal, I sent them to a friend of mine John Martin and called him to say I had just seen an interesting bird and that I would appreciate a second opinion. I also did a quick search on the internet and found a paper by David Sibley and Steve Howell on the identification of East Siberian and Black-backed Wagtails in basic plumage. A very quick read through the paper suggested the plumage of our bird was a close match to East Siberian Wagtail (Motacillia alba ocularis). John called me back and confirmed that the bird was indeed very interesting and from memory looked good for ocularis and that his good friend Steve Howell had written a paper on them as they had occurred in California – the very paper I had been reading.

Posting the photos on a WhatsApp group for further comment, several people came back suggesting ocularis and Sam Viles sent me a link to an article on the Greater Western Palearctic's first record in Abu Dhabi in 2017 (see here). The bird in question looked virtually identical to ours.

By now it was time to keep heading south to Lerwick and our ferry home, but I was confident that we had indeed found Britain's first record of East Siberian Wagtail. What a truly memorable end to our trip and one that we will never forget! 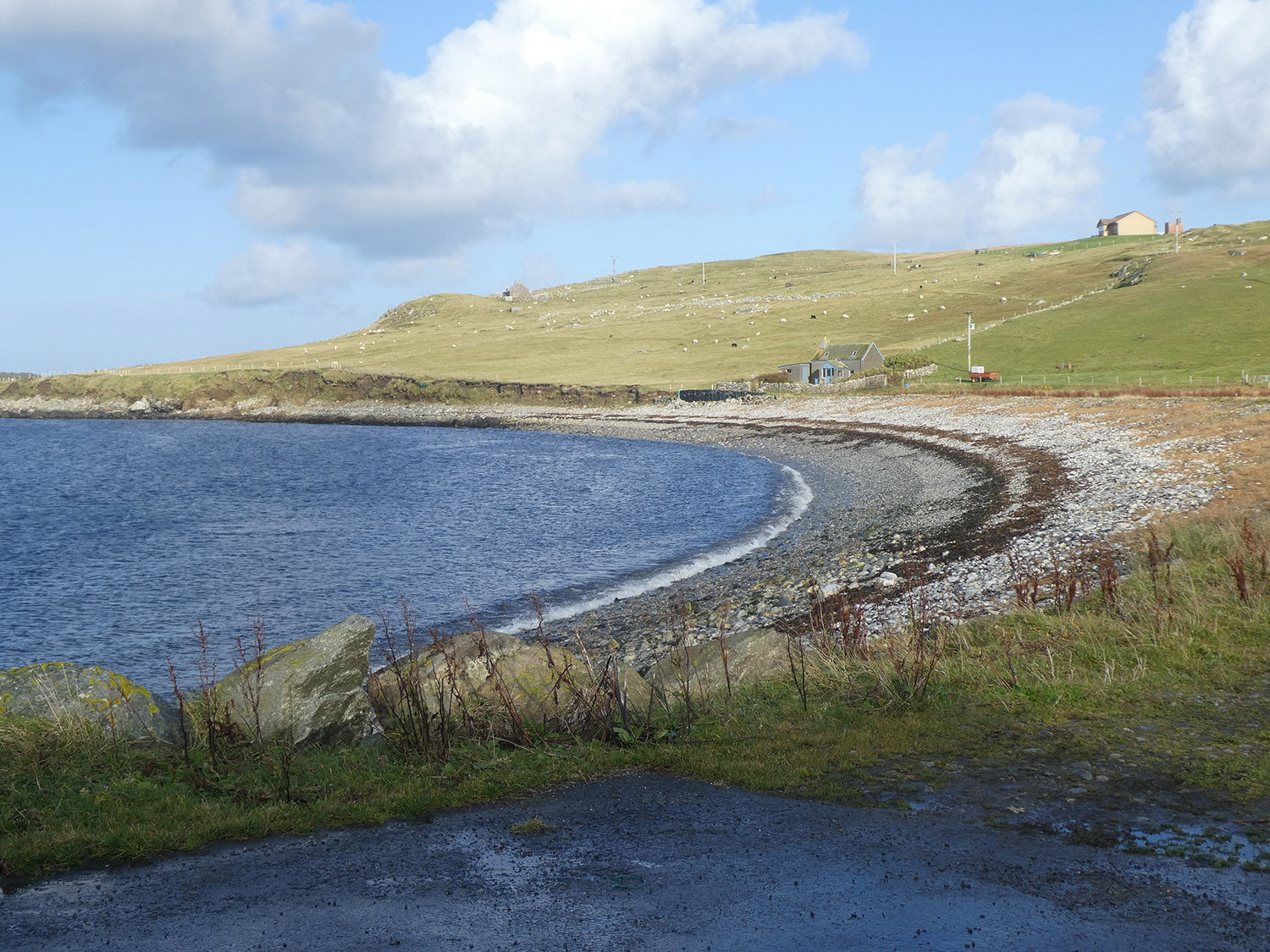 Mark and Linda chose Westing beach as a spot to eat their sausage sandwiches (Linda Sutton).

Identification of East Siberian Wagtail and the Westing bird

Of the nine generally accepted subspecies of White Wagtail (IOC v10.2), only two show a black stripe through the eye, namely East Siberian Wagtail (M a ocularis) and Black-backed Wagtail (M a lugens). Key features in separating the two subspecies in first-winter plumage are summarised below.

By October and November immature ocularis should show a dusky to mottled dusky forehead, whereas a high proportion of lugens will show a clear white or more lightly mottled forehead. The Westing bird showed a dusky forehead becoming paler and more mottled above the bill, which is more indicative of ocularis.

The patterning of the closed wing

One of the most important features is that ocularis has solid brackish centres/bases to the median coverts, which can give the impression of a dark 'chain' between the grey scapulars and the white median covert tips/wingbar, while lugens should not show this feature. This 'chain' was present on the Westing bird.

Dependent on the sex of the bird, lugens will often show from a small amount to extensive black feathering on the crown, whereas ocularis shows either a minimal amount or nothing at all. On lugens the rump is black to dark grey and can contrast with the mantle, while on ocularis the rump is pale grey with little to no contrast with the mantle. The presence of a very minimal amount of any black feathering on the crown of the Westing bird along with a pale grey rump extending onto the uppertail coverts is a good indicator of ocularis.

Many of these features are variable, so a combination of the above key features is important to clinching the identification of tricker individuals, and also confirms the identity of the Westing bird as an East Siberian Wagtail. 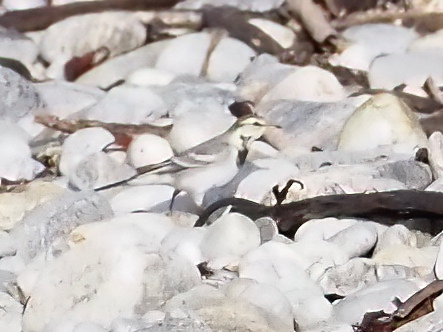 Two broad, white wingbars bordered by a dark 'chain' and grey centres to the greater coverts help to seal the identity as an East Siberian Wagtail (Mark Sutton).