I've been living in north-west Ireland for a few years, working as a wildlife illustrator and bird surveyor. The survey work is almost entirely in the mountains, which can be very bleak. Combined with working to tight deadlines at my desk I often have depressingly little free time in the field for birding. But I do love what I do, and an increasing part of this is working together with my partner (diademadisara.com) to create wildlife maps, posters and fliers with local community groups. It is very rewarding to work with on these projects to highlight the special wildlife found in each unique location and hopefully encourage others to develop an interest.

With increasing hours of daylight, I do have a bit more time to stop off and check sites on the way to and from survey areas and that was my plan for 14 February. The day started really well with a male Surf Scoter bobbing around in the waves off Rossnowlagh Beach. The strong winds made it very difficult and views were terrible, but I was delighted with a long overdue Donegal tick. After seeing the Snow and Cackling Geese at Lissadell I cut inland towards my survey site allowing plenty of time to check some lakes along the way. A hybrid Ring-necked × Tufted Duck showed distantly on Colgagh Lough; local birders think that this bird has toured the county for over a decade.

A final stop at Doon Lough showed a nice selection of waterbirds as I pulled into the car park. A quick scan with bins of a small flock of Tufted Duck diving opposite was interrupted by a fiery orange flash from a preening cormorant behind them. I was immediately excited – the colour was like nothing I had seen on a Great Cormorant before and seemed to wash all along the bill. Unfortunately it was facing away from me and I was only getting blip views of the face. 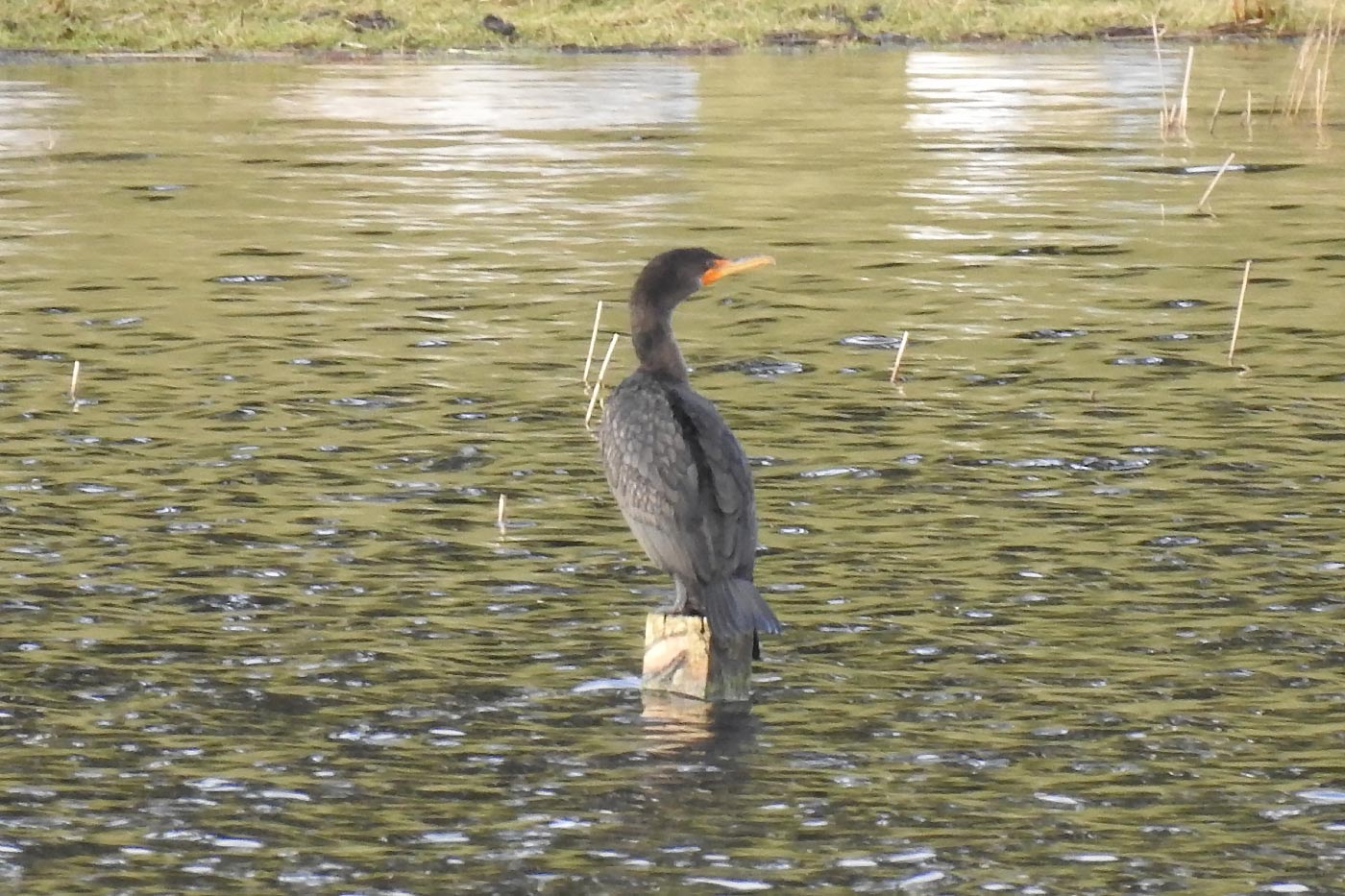 Robert's initial views of the Double-crested Cormorant were at distance and 'back-on', but the fiery orange gular really stood out (Robert Vaughan).

Panicking, I couldn't decide between setting up the scope and taking photos. I grabbed the camera and fired off one burst of shots before it unexpectedly flew. My heart was in my mouth for a few seconds and I have never been so relieved when it descended and landed on the water at the far end of the small lake. It immediately began diving only spending moments on the surface, but I was happy that I could see that the orange wrapped across the gular, which the few images I had taken seemed to prove. It must be a Double-crested Cormorant.

I made a few sketches, focusing my attention on the face pattern and noting that the feathering did not extend up and divide the throat. But with such a mega rarity, I really wanted to confirm what I was sure I was seeing with photographs before putting news out. I tried to send some shots to friends but the reception was poor and the back and forth was quite distracting. I called a local birder to join me as the cormorant continued diving but working its way slowly back towards me. A few minutes later, just as Seamus Feeney arrived, the bird flew again this time landing on a post directly in front of us. It began preening, showing the face details perfectly in glowing sunlight and it was a huge relief to get some conclusive views and to be able spread the news. 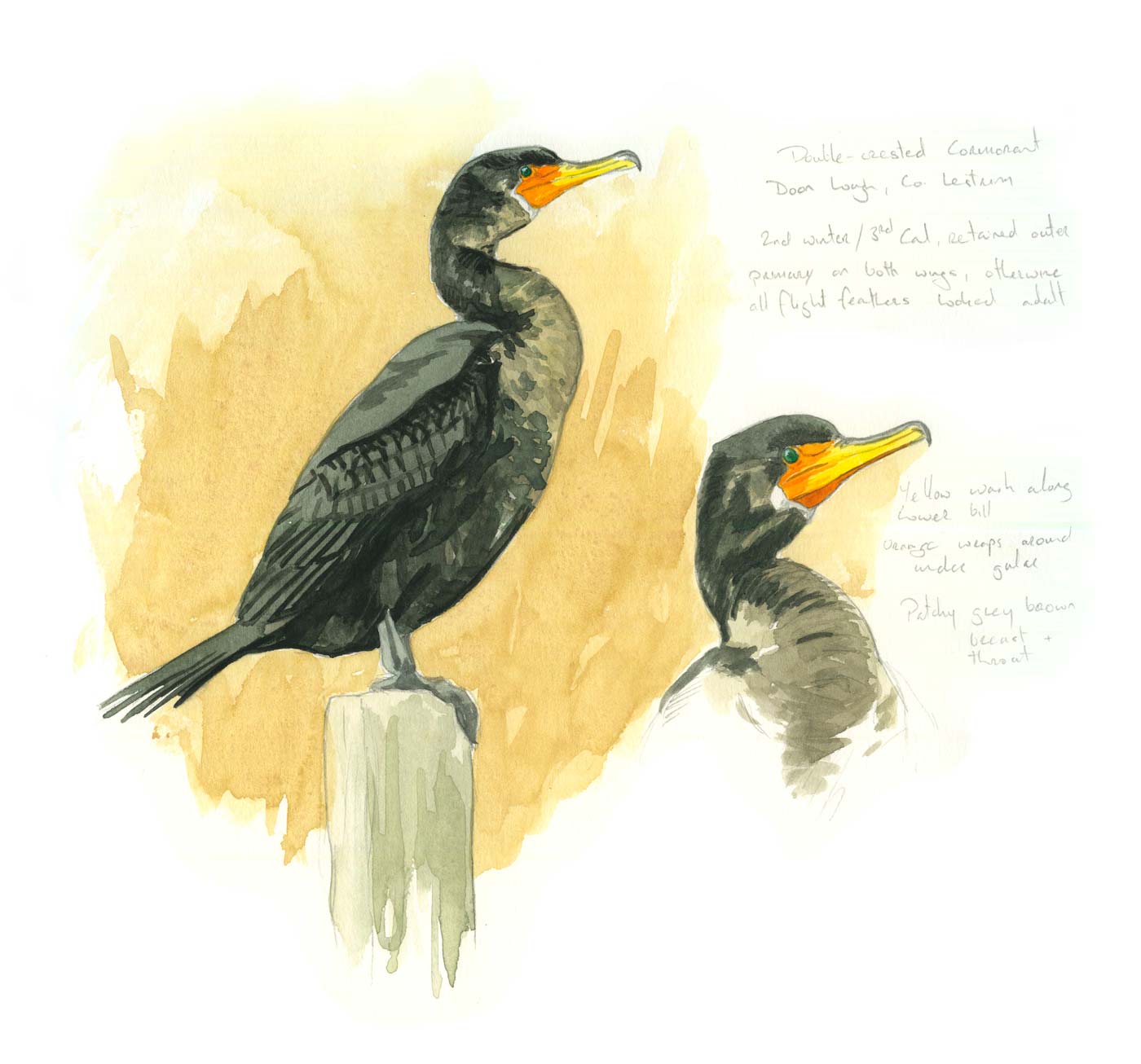 The deep orange lores and gular of the Double-crested were striking and the upperparts showed a light sheen in the sun. The muted grey-brown washed breast and throat aged it as an immature, but it was only the following day that I could see a retained juvenile outer primary to confirm my suspicions that it was a second-winter.

The 'DCC' remained on the lake until 5.25 pm when it flew south with two Great Cormorants towards Lough Gill, where it likely roosted. It was back at Doon early the following morning and has remained reliable since.

Doon Lough is a small inland lake nestled in the mountains. Such an unlikely location gives hope and motivation for more hidden gems in future! 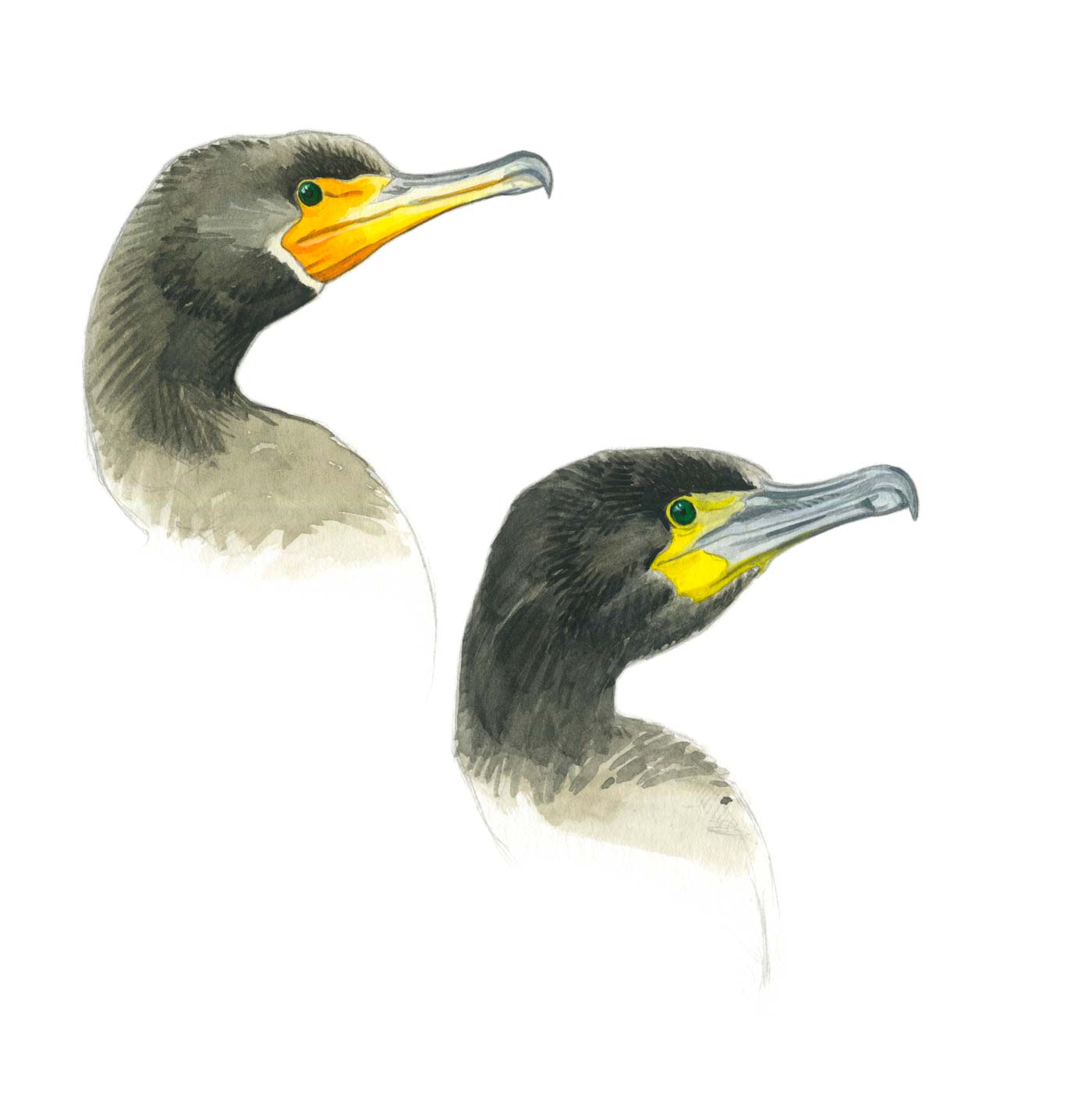 The lough was also used by several Great Cormorants. Here, differences in the shape and colour of the gular patch are shown.

Robert Vaughan is an Irish freelance artist and illustrator who currently lives in Co Donegal, having been been watching and enjoying birds and wildlife since a young age. Follow him on Twitter: @robertvaughani1