Rarity finders: Crag Martin on Hernar – a first for Norway

I moved to Øygarden, one of the best areas for birding in the county of Hordaland, in 2003 but it took me until 2008 before I actually visited the island of Hernar — despite long suspecting it of having rarity potential. Since then I have tried to cover Hernar reasonably regularly during the migration seasons, making the boat trip out there once a week where possible. These trips have produced a decent selection of birds that include Greenish Warbler, Barred Warbler and Yellow-browed Warbler.

Traditionally spring has not produced much in the way of rarities in this neck of the woods, but this may in part be because many people concentrate on the seawatching at this time of year. There is a strong passage of White-billed Divers in late April and early May, and I for one have focused very heavily on this. Spring birds on Hernar during the last couple of years have included species such as Common Rosefinch, Rose-coloured Starling and Icterine Warbler.

After a day of working on the house during which I probably broke my right index finger, I should have used the following morning to visit the doctor but instead "took off" and went to Hernar. Having read about all the recent good birds on the Shetlands and Fair Isle, I had hoped that something good might be present — hopes were high for a Subalpine Warbler but realistically I was expecting a Whinchat or a flycatcher.

One of the very first birds to catch my eye was a martin which, on the second pass, I realised was a Crag Martin. The next few hours were manic as I charged around the tiny island attempting to relocate and photograph the bird. This was an incredible find — the first documented record for Norway. The species has been reported from Finnmark on a previous occasion, but it seems that that record may not have been documented.

Once I'd put the news out on the Norwegian messaging system via others (I don't twitch and don't subscribe to such services), my phone never stopped — it was obvious that the hard-core twitchers were contemplating making the trip. 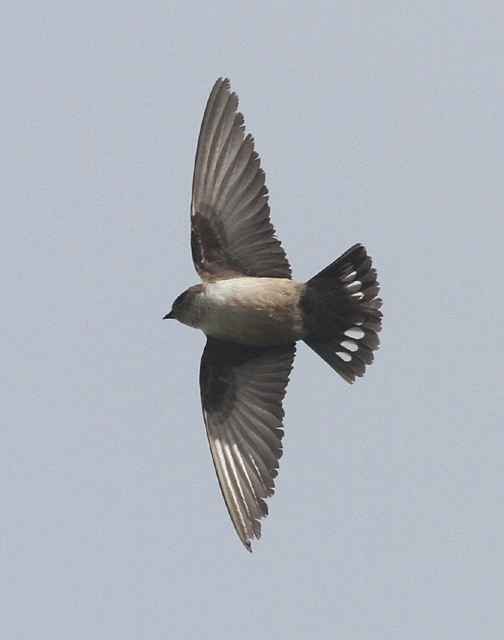 This picture illustrates all the important features (Julian Bell).

Frustratingly it disappeared twice for over an hour before turning up again. It was rather overcast at first, making photography difficult, but I secured the all-important record shots before light rain set in and the bird vanished. Each time it disappeared doubts set in; despite having photographic evidence I kept doubting the identification, scarcely able to believe what I had seen. What if I had got this all horribly wrong? I had to keep reminding myself that Crag Martin is not a particularly difficult species to identify and that it is also a species I am reasonably familiar with — there really was no need for this paranoia. 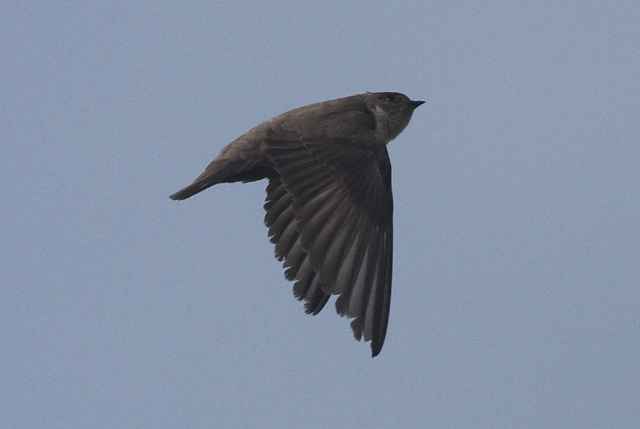 The flight feathers seemed rather worn — probably useful in determining the age of the bird (Julian Bell).

Shortly before the boat home arrived the sun came out and the Crag Martin turned up again, giving fantastic views — and some more photographic opportunities. With barely enough strength in my finger to depress the shutter I found adrenalin was an effective painkiller — but between each bout of photography the finger protested badly. The pictures in this article were taken only a few minutes before I had to leave the island, something that added to the already high tension. As anyone who has attempted flight shots of hirundines will know, obtaining good photographs was no easy task. 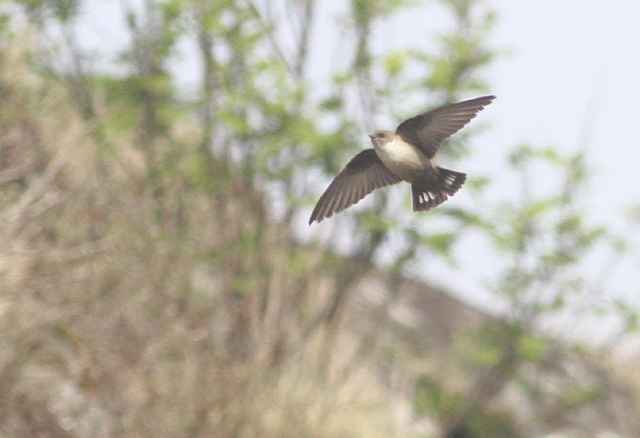 I felt it important to get some recognizable background into some of the pictures... (Julian Bell).

Despite this being the only day of the week where one can do a half day due to the boat timetable, there were no other birders on board when it came back to pick me up. On Hernar one really does have the birds to oneself....