The subject of inland seabirds is one that can divide opinions among birders. Other than species such as Kittiwake and Northern Gannet, and the skua family, all of which have a regular overland migration, the very fact that they are inland suggests that something has gone wrong, and that will inevitably upset some people. I tend to take the view that unless they can be actively helped by being taken into care, rehabilitated and released on the coast, we might as well enjoy the sight of them, while acknowledging that this is nature, and not everything has a happy ending.

Seabirds are undeniably exciting, especially for those of us who don’t see them very often. A proper autumn gale will see many inland birders heading to their local reservoirs hoping to find one. Most of the time you see nothing, but over the years I’ve notched up a reasonable seabird list in Leicestershire and Rutland.

This autumn’s gales have come and gone without a sniff of a seabird at Rutland Water, though, and by the beginning of November, I was starting to think that what has been a quiet autumn locally was all over. In calm, overcast weather, winter visitors were arriving and, as I reached the north arm late morning on 2nd, seabirds were the last thing on my mind.

I set up my scope and started scanning the water. There was a drake Greater Scaup among the Tufted Duck, and one of the now resident Great Egrets in the bay, but where was the returning Long-tailed Duck or the first Great Northern Diver of the winter? ‘Just something other than the same old stuff, please,’ I thought.

After half an hour I was thinking about lunch, but continued scanning. And then there it was in my scope view, sitting quietly on the water, closer to the shore than I’d been looking up till then: a Cory’s Shearwater. ‘What?!!’ I thought. ‘OK, all this inland birding has finally got to me, and I’m starting to see things that aren’t there. Or maybe I’ll wake up in bed in a moment and find it was all a dream.’ 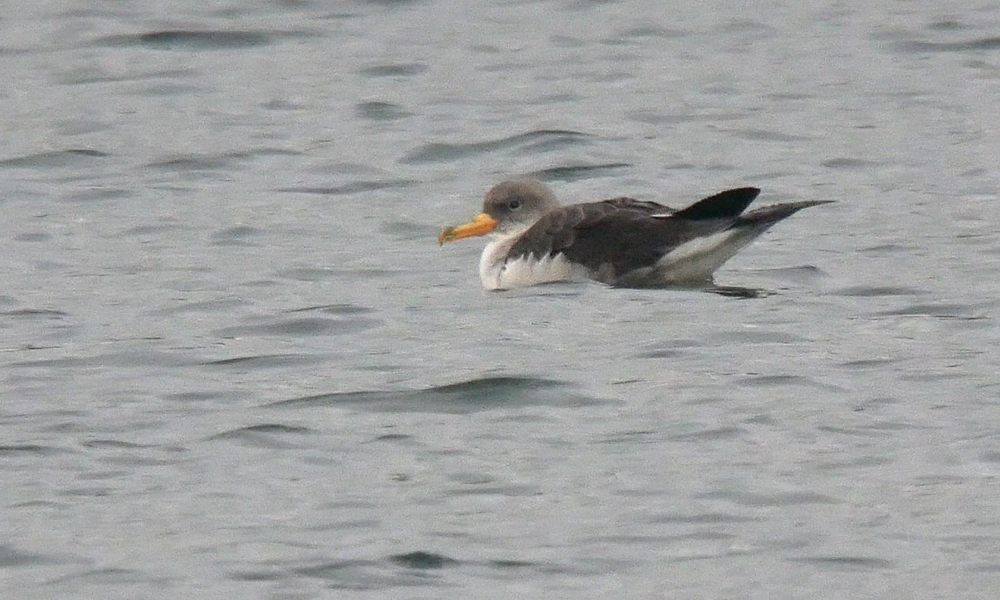 Andy’s initial views of the Cory’s Shearwater were of it unsuspectingly sat on the water (Andy Mackay).

I closed my eyes, stepped away from the scope, shook my head and looked back again. It was still there, and still very obviously a Cory’s Shearwater – at Rutland Water, in November, on a flat, calm day. Was there anything else it could be? Other than the even more unlikely Scopoli’s Shearwater, there wasn’t. This was really happening, but this being the north arm on a weekday, there was no one else around to confirm that I wasn’t hallucinating.

I’ve found a few nationally rare birds in my time, but the likes of Yellow-billed Cuckoo on Scilly, or Pechora Pipit and Yellow-breasted Bunting on Shetland, while exciting finds, were at least ‘on the radar’ at those times and places. This was something else entirely, and I’d never before felt that sensation of utter disbelief at what I was seeing.

Somehow I managed to operate my phone to get some record shots of the bird through the scope, and started getting the news out. Before the first people have arrived, though, the shearwater got up and flew low over the water for several minutes before landing again. This added some urgency to the situation. I had assumed it was just going to sit there on the water and maybe eventually keel over, but it was clearly well enough to fly, so could leave at any moment.

People started to arrive. Roger Brett and Brian Moore, who I’d seen earlier at Eyebrook Reservoir, were first, and Brian managed some excellent DSLR shots as I ran back to the car for my digiscoping camera. More birders arrived, and all agreed that it was bordering on unbelievable. Tim Appleton turned up somewhat breathless in smart jacket and trousers, having been at a Birdfair sponsors’ meeting, and managed to get it on his house list. Colin Towe summed it all up perfectly by saying that when I phoned him, he could tell from the panic in my voice that I’d got something good, but even if I’d given him 100 guesses he still wouldn’t have said Cory’s Shearwater. 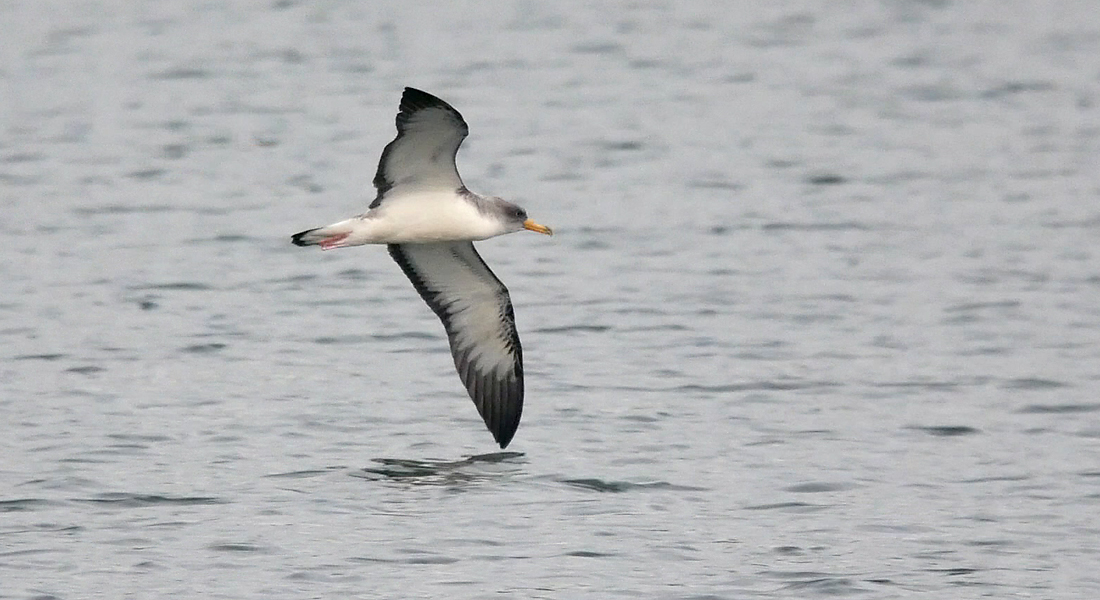 The bird gave excellent views in flight and allowed for superb images to be taken, including this one – which quickly rules out the possibility of Scopoli’s Shearwater (Andy Mackay).

During the next hour or so the bird flew around several more times, continuously mobbed by gulls, but never gained any height. At around 1.30 pm it flew the length of the north arm towards the dam and, 30 minutes later, disappeared from sight behind Armley Wood on the Hambleton Peninsula.

It then went on a tour of the whole reservoir, visiting the dam, before ending up on the south arm, where it was last seen at dusk, having at one point flown up high over Lax Hill before coming back down. The following day there was no sign of it. Two days later, it was refound at Pitsford Reservoir, Northants, some 25 miles south-south-west, which unfortunately did suggest that it might not make it back to the sea unaided. But unless it becomes weak enough to be captured, there’s nothing practical that we humans can do for it, other than watch and be ready to act if necessary.

As far as I know, this is only the third-ever inland record of Cory’s Shearwater in Britain, the previous two having been at Chasewater, Staffordshire, in October 1971 (picked up exhausted and later died) and flying over Regent’s Park, London, last September. A once-in-a-lifetime bird for us at Rutland Water: it was utterly amazing to see it flying around at such close range, and yet more proof that you really can find anything, anywhere, anytime in this game. 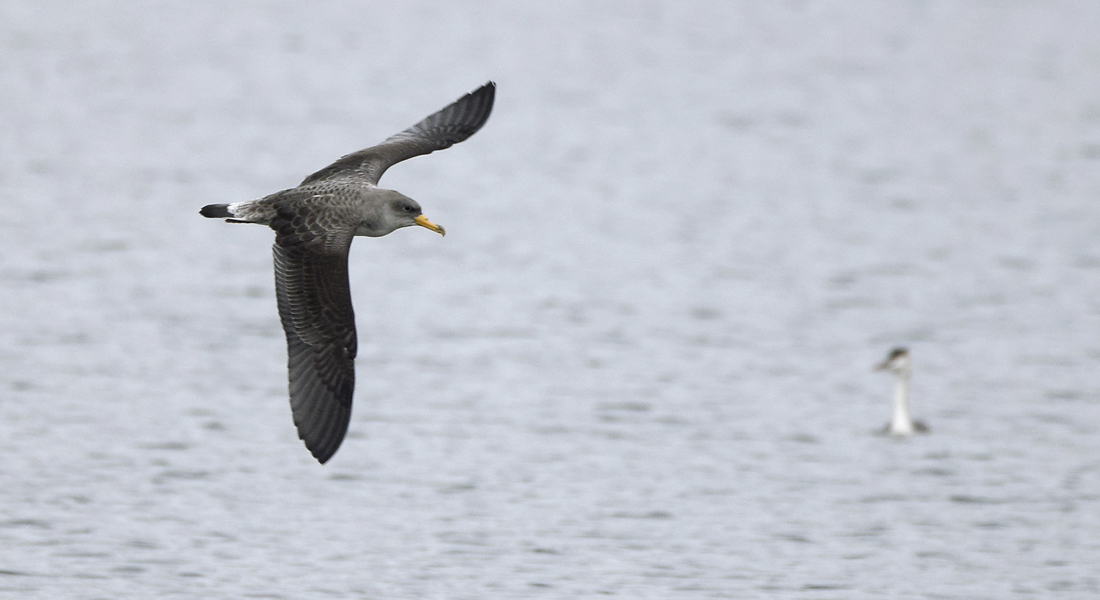 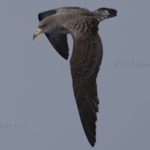 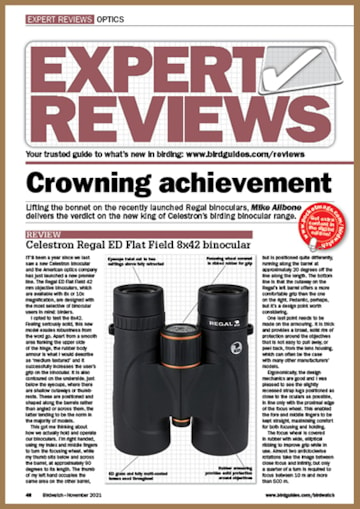