It was November 2014 and we had finally made it to Barbados for a long-overdue family holiday. My wife, Nina, and I had been looking forward to the trip since we booked it with our good friends Amy and James, and our respective families, earlier in the year. Our apartment was ideally located, near Speightstown, in the northwest of the island and we had a beautiful view from our veranda looking out over the Caribbean Sea. On our first morning, jet lag was proving useful as an untimely wake-up allowed for an early morning seawatch producing a solitary pale phase Red-footed Booby and on the following day at a similar time I managed to bag a single Brown Booby. Though this was definitely a family holiday, I always try and include some birding and things had started well.

Amy and her family have been holidaying on the island for over 20 years and she had made some good contacts. She knew I was an avid birdwatcher and via one of her many Barbadian friends I was introduced to local bird enthusiast Richard Roach — a keen bird photographer and someone well connected with the local birders. During our first telephone chat we discussed an itinerary for our opening birding expedition. I was obviously keen to see some of the island specialities although I had already seen the only endemic, Barbados Bullfinch, which was regular visitor to our breakfast table. Richard made a few suggestions and as a final comment I said I would be keen to try and find some island rarities and as it was November, "you never know, we may find a first…"

Our first trip took us all over the island. Richard was kind enough to show me a lot of the key bird areas. We visited wooded areas for Caribbean Elaenia, coastal areas for shorebirds and many wetlands for waterfowl, egrets, herons and more shorebirds. We managed to connect with island scarcities such as Lesser Scaup, Ring-necked Duck, Ruff and Northern Waterthrush.

Given our success, a second trip was planned for the following day. Bearing in mind respective family commitments we decided to head out early morning. Highlights included Black-crowned Night Heron and Killdeer — the latter an island scarcity found the previous day by local birder and blogger Julian Moore, who was on a mission to see over 100 species on the island in a calendar year. Our final stop of the morning was a wetland in the parish of St Lucy. Though quiet, we managed to add Yellow-billed Cuckoo to my trip list. 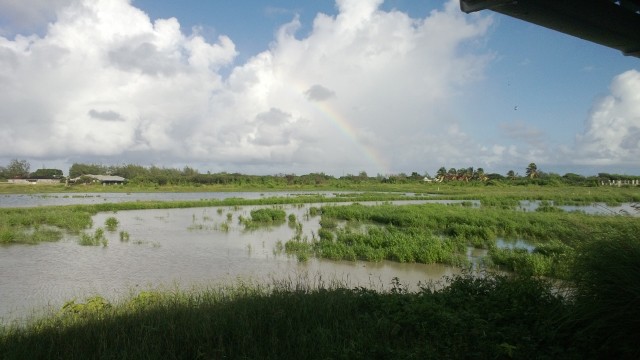 On leaving the reserve Richard told me about a bird which had initially been seen by Dr John Webster, one of the local bird experts, around the reserve entrance. Its identity was a mystery: there were musings that the bird could be a nighthawk, although no one had seen the bird well enough to confirm. Both Antillean and Common Nighthawk are recorded in Barbados and, with a report of white in the wing, this option seemed plausible.

"That's not like any cuckoo I've ever seen!" came Richard's reply.

It was easy to see why Richard said that, given the marked difference between this bird and the Yellow-billed and Black-billed Cuckoos which frequent the Caribbean. The bird was in view for no more than 20 seconds and by the time we exited the car the bird had flown into the undergrowth. We tried to relocate it but to no avail. I was convinced this was a Cuculus species but the question mark over identification was still present. I had seen nighthawk species previously and the jizz just didn't seem right. We needed a better look. I made one failed daytime attempt at relocating the bird but given the possibility of a crepuscular species, I drove back in the evening to see if the bird would come out to hunt. There was no sign, and I thought the opportunity had passed. 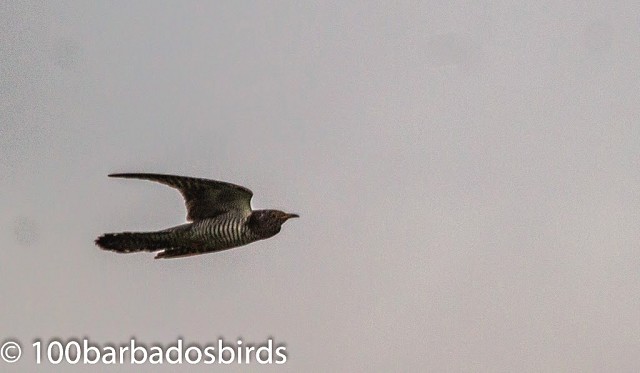 Determined to relocate it, I decided to return the following morning. On the morning of 20 November, I arrived at the location at 5.45am as it was just getting light. As I pulled up in the car a looked over to where we had last seen the bird. Something flew up and perched in the open, in the field adjacent to the reserve entrance track. It was the bird in question and it was clearly a Cuculus species! My adrenaline started to race as I thought this may be an island first. As I was alone I knew I needed photos for the local birders to take me seriously. I had my scope and camera phone and I managed to get a few shots with suboptimal kit and poor light but they showed the bird was very unusual for this part of the world.

I was going through descriptive features in my mind. In flight the bird was dark grey-brown above. When perched, the head appeared relatively small. The bill was slightly decurved with a distinct yellow patch at the base, especially on the lower mandible. The feet were yellow and a yellow orbital ring was clearly present. It was clearly a juvenile/first-winter: the head and upper breast gave the impression of a hood but on closer inspection barring was present in the upper chest. There were pale (whitish) patches on the crown. The underparts were white with dense black horizontal barring. I was concentrating on the undertail coverts, as I had read a great Birdwatch article on separating Common and Oriental Cuckoo and these appeared white with black bars. The tail was long, extending well beyond the primaries. I was unable to get a good view of the rump. I watched it catch a couple of grubs, which it devoured on its perch, before losing it to view at around 6.05am — it had been on show for no greater than five minutes in total.

Richard arrived in his car five minutes after I had last seen the cuckoo and I showed him the pictures. He was understandably excited and we filtered the news to the other birders on the island. The bird was nervous and flighty and as a result was difficult to photograph, but in the following days the other island birders managed to good views. The rump was eventually seen, excluding African Cuckoo and confirming identification as Common Cuckoo (Cuculus canorus). After some research we discovered that the first Common Cuckoo recorded in Barbados (and the Western Hemisphere) was shot on 5 November 1958 at the Graeme Hall Swamp, some 56 years previous. 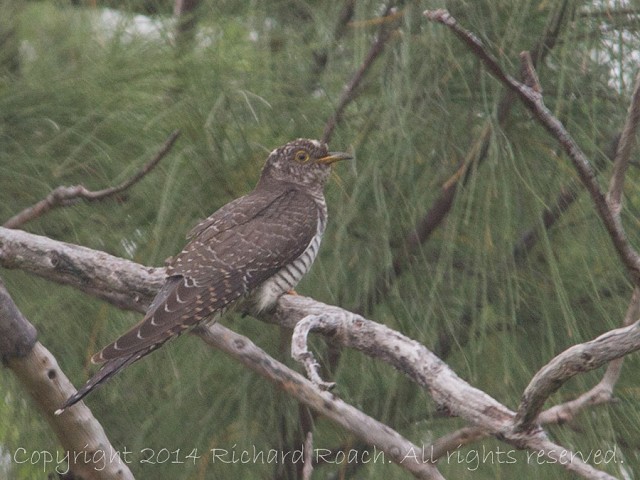 Perhaps not a first for Barbados but this island second was almost as good! Barbados is a fantastic destination for a family holiday, and offers some great birding opportunities. If you are interested in travelling there, keep up to date with local sightings via 100barbadosbirds.blogspot.com.