Ty'n-y-Caeau Farm is situated along the Glamorgan Heritage Coast in the Vale of Glamorgan. For a number of years, in co-operation with local farmer John Evans, supplementary feed has been provided throughout winter months for farmland birds. A long strip of set-aside crop is also sown annually by John – this is a project funded by Glamorgan Bird Club to help declining farmland birds. For several years, throughout autumn and winter, Kenfig Ringing Group has been monitoring and ringing the birds on site. It was initially set up to safeguard a Tree Sparrow colony but, despite the best efforts of many, the colony is now extinct.

The weather over Christmas and the New Year had been awful, preventing us from going to the site to ring for almost a month. When the wind and rain finally made way for calm and sunny weather, Colin Baker, Heather Coates, Andrew Hughes and I planned to make the most of it with a couple of morning ringing sessions. When we arrived on the morning of 12 January, the weather was perfect – not a breath of wind and a lovely sunrise. We had high hopes for a good session. 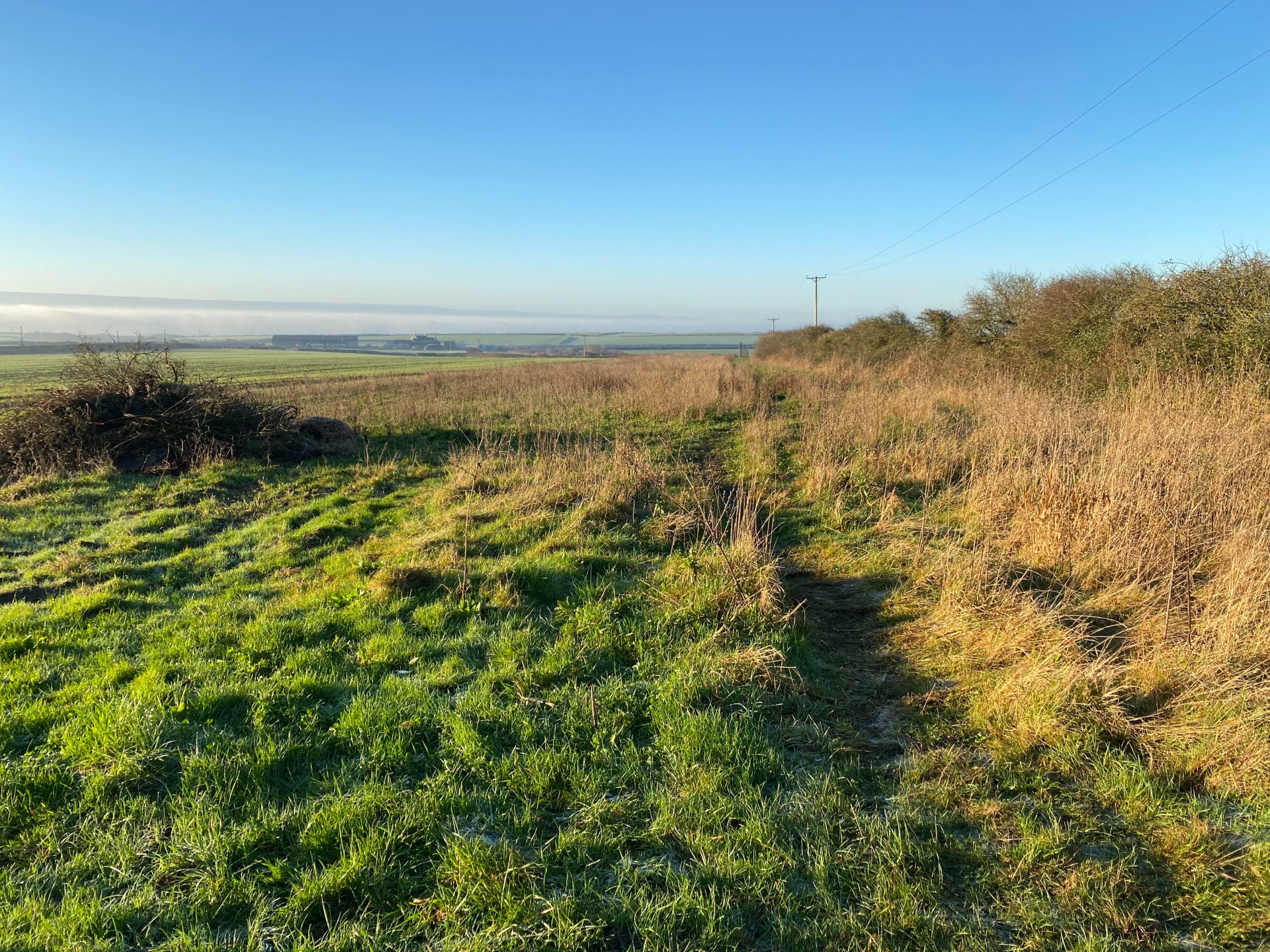 The site of the Cirl Bunting, with Ty'n-y-Caeau Farm in the background plus Somerset and Devon in the distance across the Bristol Channel (Tom Wright).

Once the nets were up and the feeders filled, we headed back to our makeshift ringing station to wait before heading out to do the first net round. The first couple of rounds were underwhelming with only a few Blue Tits and a European Robin – not the buntings and finches we were after! By about 11 am there still hadn't been an upturn in activity. We thought that with all the mild weather we'd had recently the birds were not attracted to the supplementary seed provided.

However, we persevered and at about 11:40 am we were due to do another net round. I went ahead expecting yet another quiet catch. As I was walking alongside the mistnets I noticed a small bird perched right at the top of the adjacent hedgerow. Due to the angle of the sun, dark shadows made picking out plumage features difficult. I could definitely see a yellow belly and what appeared to be a bold black-and-yellow striped head pattern! I thought to myself, 'surely it can't be a Cirl Bunting' ...

As I made my way around to get a better angle without shadows I was expecting the bird to materialise into a Yellowhammer, but as I got closer and the light improved I realised I wasn’t imagining it. I stood there, no more than 5 metres away, but had no optics or camera equipment – rookie mistake! After about 20 seconds of staring, it flew over the back of the hedge and out of sight.

I ran back to the top of the field to get my binoculars and camera. On my way up I eagerly told Heather, Colin and Andrew what I'd just seen and all were equally excited. I made my way back to the bottom of the field, now standing with the sun behind me and a good view of the hedgerow where I'd initially seen it.

After some 15 minutes it flew back in, landing on exactly the same section of hedgerow as earlier. I had fantastic views of it lit up brilliantly, with the sun illuminating the bird perfectly. However, before I could even think about getting my camera out it took off and flew a good distance over two or three hedgerows, calling as it went, before appearing to drop onto a distant hedge and out of sight. 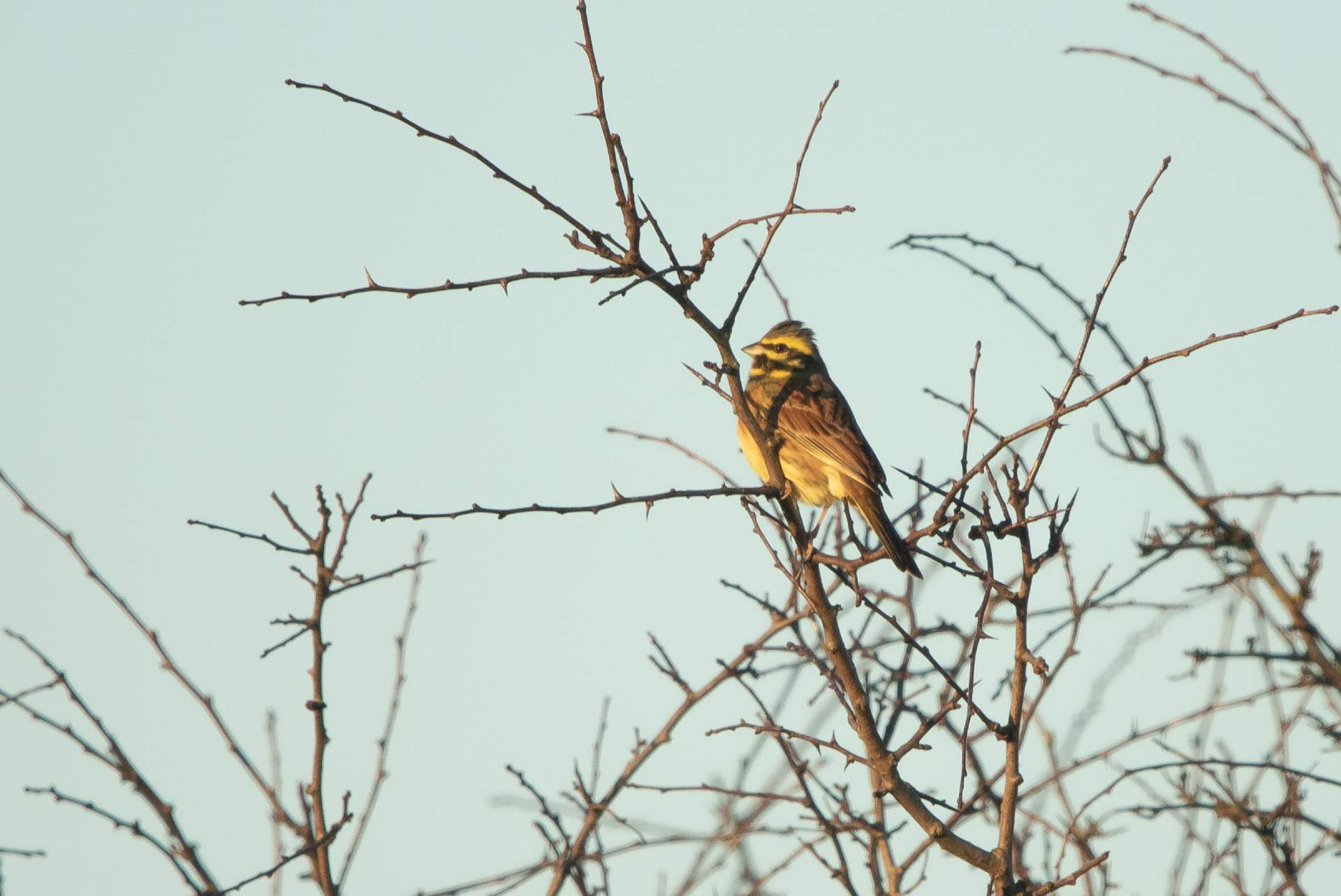 The last Welsh Cirl Bunting was on Bardsey Island in 2004, while the previous Glamorgan record was as long ago as 1982 (Tom Wright).

As previously planned, we returned the next day to undertake another ringing session. I was hoping that the Cirl Bunting would reappear, allowing me to get some photos. I was dreading the thought of submitting a single observer description where my longest view was without optics.

By 8 am the nets were up and a couple of local birders had arrived to help search for the bunting. On our way down to do the second net round of the morning a couple of people noticed a small bird fly in and land in the hedgerow just ahead of us. At first it landed out of sight but soon after it started making a familiar call, I became very excited!

The Cirl Bunting then popped up and perched perfectly right at the top of the hedgerow, as it had done the day before. I scrambled to get my camera, managing to rattle off a few images before it flew off, just 30 seconds after landing. I was thrilled to finally get a photo as I was starting to doubt my sightings from the day prior.

All of those who made the effort to arrive early were treated to fantastic views in the early morning light. Once positive news was shared more people started to arrive. It wasn't until 3.15 pm the same day that it was seen again and, at the time of writing, remains tricky to catch up with. It seems to favour mornings at the moment, having appeared on consecutive days at around 9 am. Hopefully it gets into a routine, allowing more people to catch up with it.

This record exemplifies the importance of set-aside and supplementary feeding that is often vital for farmland birds nowadays, especially with increased intensification of farming practices. We are thankful that John Evans is so on board and very grateful to Glamorgan Bird Club for funding such a successful project.