Phil Snaith: I'm a Derbyshire birder on holiday in St Ives and have been birding whenever I've had the opportunity. I went early on the morning of Monday 26 August and was looking out from St Ives Island when I saw a bird that I didn't immediately recognise. It wasn't far out, but was facing away from me. My first thought was of a young Northern Gannet. However, the colour was unusual – it was too brown – and the tail also seemed unusually splayed. It was low to the water, often on the water itself, and on its own.

I was sure it was no Northern Gannet, an opinion I became even more confident of when I consulted my Collins Bird Guide app. I was sure what it wasn't, but I still didn't know what it was! However, in the time I'd been looking at my phone, the bird had disappeared from view and I decided to leave it and have another look later in the day. 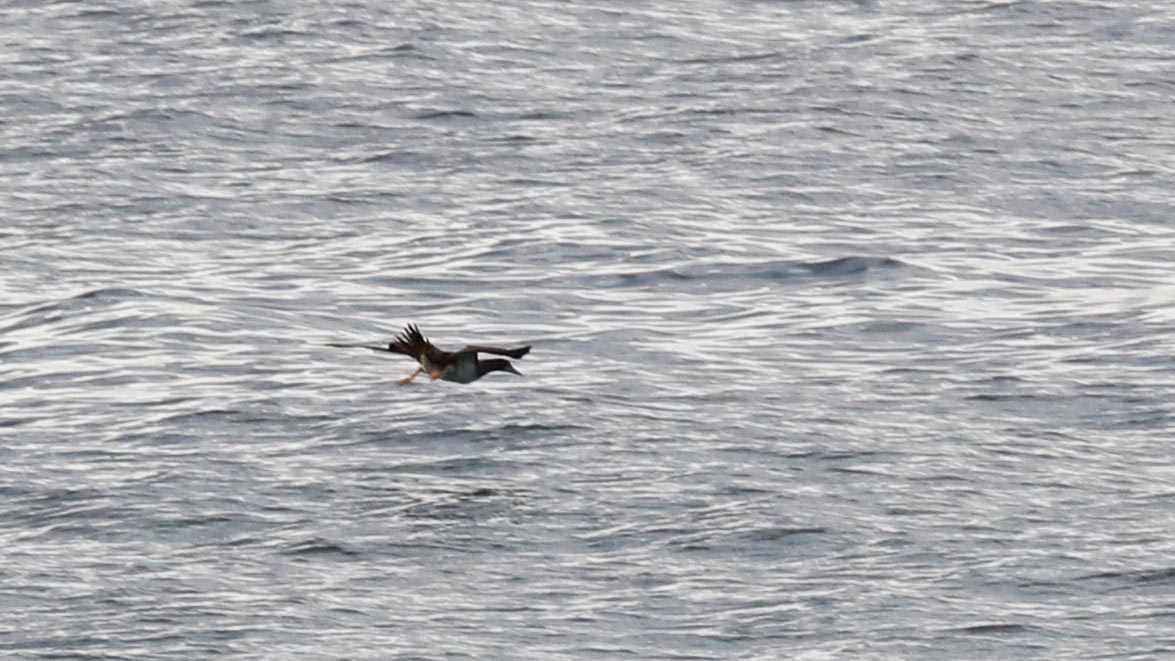 Phil's first views of the Brown Booby came early in the morning of Monday 26th, but were brief and from a poor angle. Although he didn't know what it was at the time, the warm brown plumage was notable, as was the splayed tail, and he was sure it wasn't a Northern Gannet (Keith Jennings).

Kester Wilson: For the previous few days I had been getting up at 4.30 am to go ringing at Nanjizal and, after a busy morning extracting Sedge Warblers, I decided to pack up early so I could go to St Ives with family and friends. As getting into St Ives by car is a grim prospect in August, we decided to get the train from St Erth. Having small kids, we didn't venture far from the train station and ended up on the nearby beach doing the usual bucket and spade activities. While sitting close to the shoreline watching the kids paddling in the sea and keeping the gulls away from the food, I noticed a few birds feeding offshore. As I was on a packed beach with children and bikini-clad women I thought that taking binoculars with me maybe wasn't a great idea and, let's face it, you never find rare birds on a packed beach …

One individual stuck out as being different and not the usual Northern Gannet. It wasn't feeding with any other gannets, so I couldn't make a size comparison. It did look lighter framed, but it was the plumage that jumped out at me as it was unlike any immature gannet. I could see a clear dark breast and head, sharply contrasting with the white belly, as well as an underwing pattern unlike an immature gannet. Having seen Brown Booby abroad I immediately started to wonder if this could be one. The bird was staying low and diving at a very shallow angle, which again didn't seem right for a gannet. Most unusual was the frequency of dives, which seemed quite manic as it quickly repeated a succession of dives.

After a while it drifted off towards the St Ives Island. I started to doubt myself once it had disappeared, as anyone would, especially without my 'bins'. Surely it couldn't be – a hot August bank holiday … a packed beach and no optics!

Hoping that there might be someone with optics in the area, I sent a message to one of the local WhatsApp groups. Knowing that there would be lots of raised eyebrows, my message said: "Sat on beach at St Ives with no bins. Interesting-looking gannet-type bird feeding offshore. Looks a bit like a Brown Booby. Sure it's not, but if anyone's out this way." 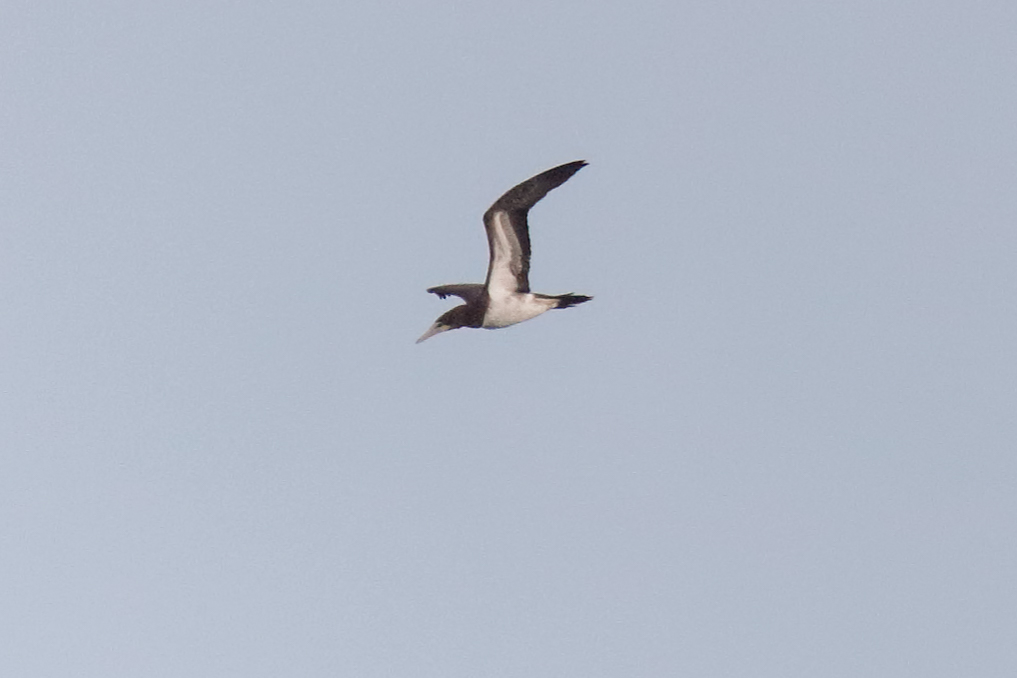 Even without binoculars, Kester's initial views suggested a clear dark breast and head, sharply contrasting with the white belly, as well as an underwing pattern unlike an immature gannet (Michael McKee).

Phil Snaith: My friend Mark Beevers had promised to let me know if anything significant turned up in Cornwall while I was there. Around 2 pm he messaged me to say that a Western Bonelli's Warbler was near Sennen and … a possible Brown Booby had been seen off St Ives! Though I've never seen Brown Booby before I knew straightaway that must be what I'd seen and I replied to Mark: "I'm 100 per cent sure I saw that bird earlier!"

With this news I decided to get back out to St Ives Island and search from where I'd seen the bird earlier. Another birder, Keith Jennings, arrived and we spent some time looking for it without success. Keith and I agreed to meet up early on the Tuesday morning to try again.

Tuesday came and the search started at first light, but again there was no sign. We weren't far off giving up at around 7.20 am or so, when I noticed the bird around some exposed rocks off Porthgwidden Beach, where it was performing shallow dives on a regular basis. As with the previous morning, it kept low to (or on) the sea, and never dived from a great height, like gannets do. I got Keith onto the bird, who realised it was too distant for photos and immediately ran off down the hill to get closer while I kept my eye on it. 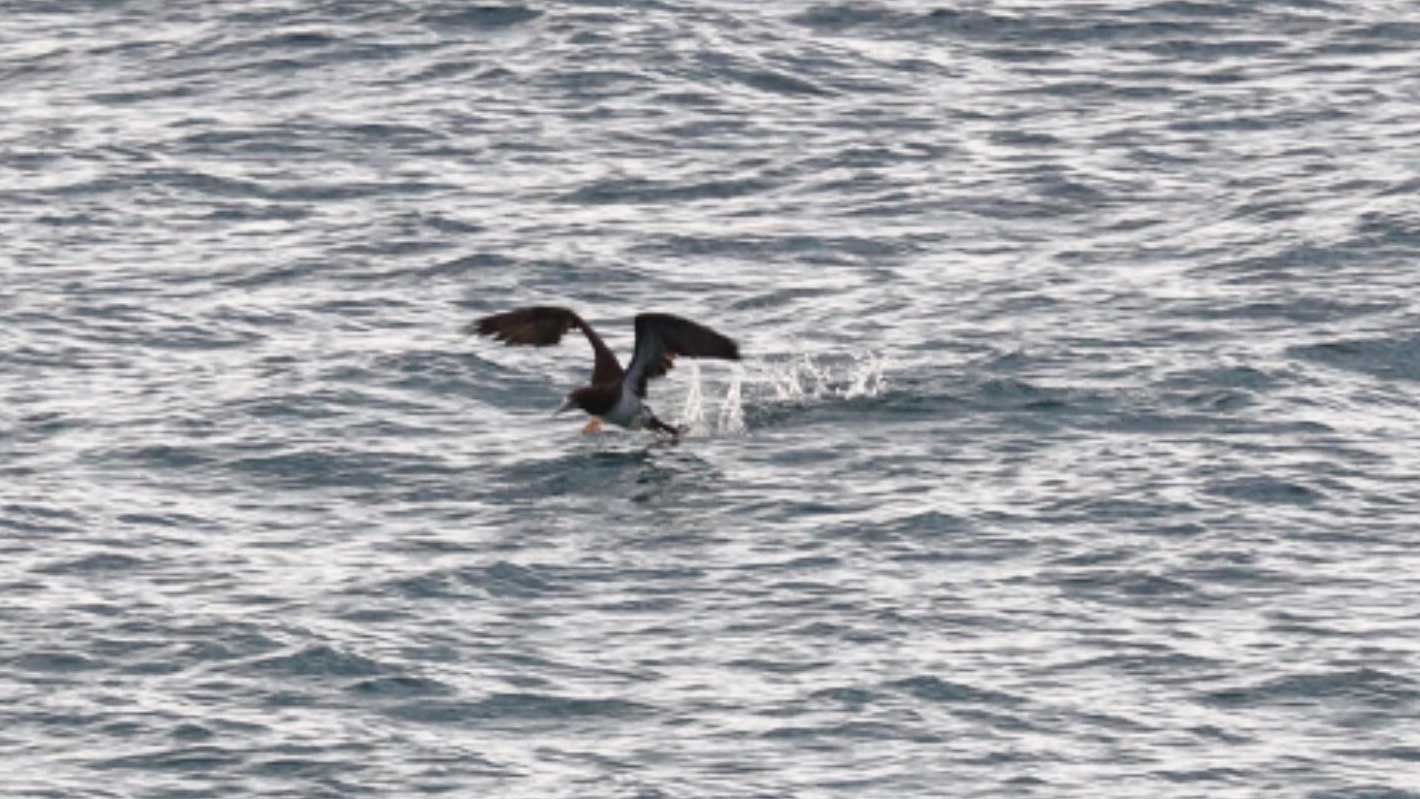 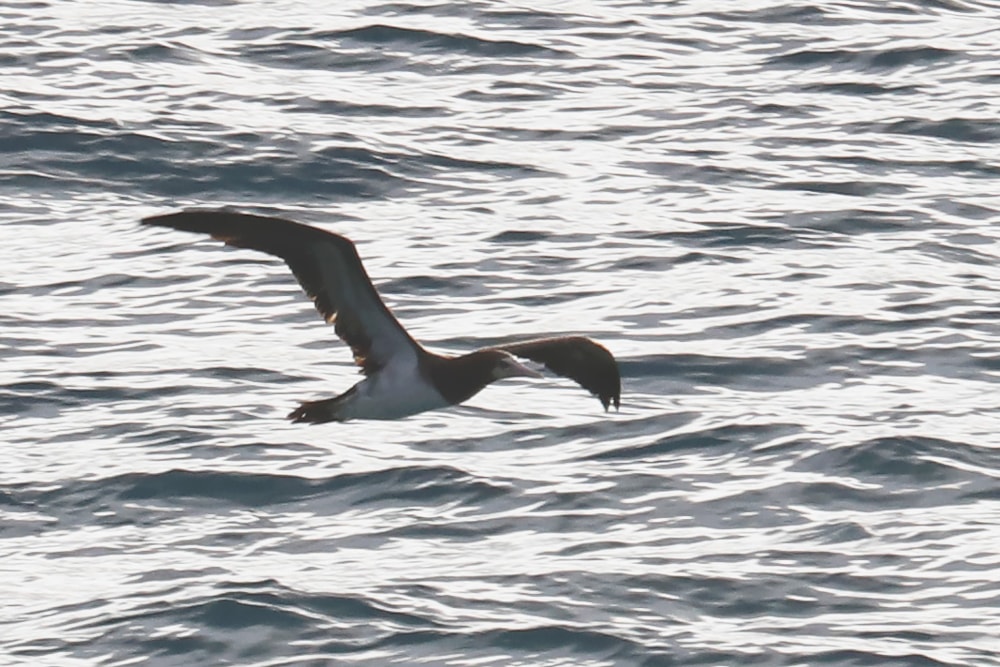 Two photos from Keith's original series of images, which helped clinch the identification as an unequivocal Brown Booby (Keith Jennings).

The bird was slowly going away from us, towards St Ives Harbour, and out of view. I ran back up to the top of the hill to look in the direction of the harbour, but neither of us saw it again. Fortunately Keith managed a series of record shots, which clinched the identification as a Brown Booby. The news was then relayed on BirdGuides at 7.55 am as a definite Brown Booby, having been identified from the back-of-camera photos posted on social media by Keith.

Kester Wilson: On Tuesday morning I was out netting again at Nanjizal. While opening up, a European Nightjar was flying around and the previous day's Spotted Crake flew up on the first net round. The day got even better with more than 200 birds ringed, including a Blyth's Reed Warbler and two Wrynecks. It was then topped off with the news that the booby had been photographed! I was shocked, but thrilled that someone had come up with some evidence to verify my suspicions. Such fortune that I'm sure most birders can relate to, as we've all been there when we think we've seen something unusual but the moment passes too quickly. Quite a surreal and incredible 24 hours. 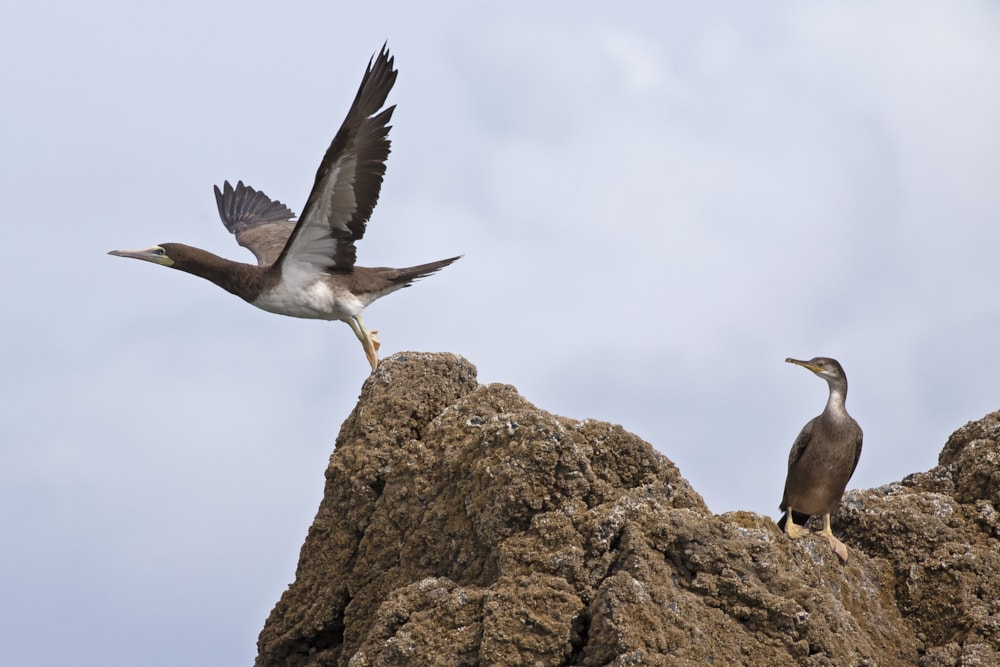