The local birders in Winterton were pretty excited about going birding on the morning of Thursday 20 October as, for the first time all month, the wind had been easterly for the previous 24 hours and the day was leaden with cloud and intermittent rainfall. I, too, was hopeful for some good birds, despite the fact that I'd been out on the patch for a solid 10 hours the day before and my best bird had been a Lesser Redpoll.

But patchbirding at Winterton is often like that and you just have to keep the faith – even if that faith sometimes seems to border on religious self-flagellation. I've lived here for 19 years. I'm not massively keen on crowds, and twitching doesn't do it for me, so pretty much all my birding is done from my door in the hope and expectation that occasionally – very occasionally in my case – it pays off, and the countless hours of birdless trudging about will be all forgotten in a moment (the last time it paid off 'big time' for me was 14 years ago, on 20 April 2008, when I found Norfolk's first, and to date only, Black Lark in the North Dunes). The Blue Rock Thrush was mobile, often showing best when perched atop a roof (Sue Bryan).

Since I retired a couple of years ago, I have been able to conduct my patch walks on a daily basis and I was out again at 7.30 am to undertake my customary autumn morning route through the 'valley', as local birders call the Winterton South Dunes SSSI. As I headed off, I could see Barry, another of the village birders, heading off with his 'scope towards the fishing huts for a seawatch, and momentarily I was torn about whether I should be doing the same thing. But I decided to stick to my plan and look for a Pallas's Warbler – surely there must be one here somewhere!

The valley was full of thrushes - mainly Redwings, Blackbirds and Song Thrushes, and there were many more Goldcrests than the day before too, so it felt pretty rare. But despite looking everywhere, I could find little else and at 9 am I headed up towards Hermanus Holidays, the holiday accommodation complex of distinctive thatched roundhouses which sit above the dunes just south of the village.

This area is pretty much out of bounds to birders but the owners kindly allow a few locals to scan the complex from the top of the slope leading up to it from the South Dunes. The rooftops are a favoured haunt of Black Redstarts. The area also contains a few more sheltered spots which I figured might hold birds avoiding the still fairly strong wind.

At about 9.15 am, I got to the top of the slope and scanned around. Immediately I saw a Grey Wagtail fly in and land on one of the thatched rooftops. Grey Wagtail is a slightly tricky year tick here these days and I knew that Barry would be interested so I rang him, but as is almost always the case with his ancient, steam-driven mobile phone, I couldn't get through.

I tried again and was waiting for the phone to connect and keeping an eye on the wagtail when I noticed another bird come out from around the far side of the thatch lower down and shimmy up onto the TV aerial. It was about the size of a Blackbird, but the effortless, agile way it had bounced up the slope of the roof was very different from a Blackbird and actually reminded me more of a huge Black Redstart! 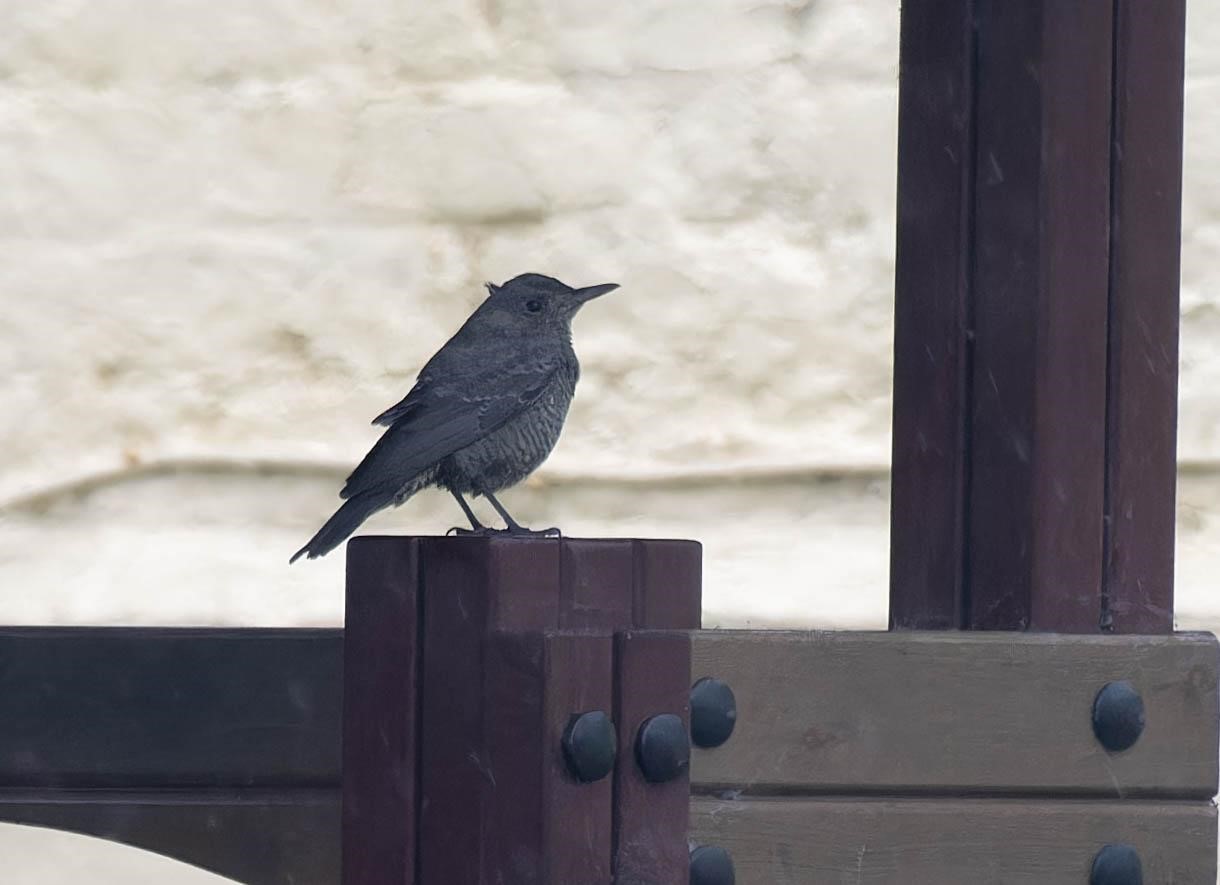 I'm not a great birder by any means. After 50 years of birding, I still can't really get to grips with large first-year gulls, or with Phylloscopus and Acrocephalus wing formulae, and confining my birding to one often birdless patch doesn't exactly provide me with the opportunity to hone my field ID skills on a wide range of species. But, somehow, I think I knew what the bird I was looking at was even before I raised my binoculars to get my first proper look at it – and when I did, the shock of confirmation was overwhelming.

Sitting on the TV aerial, looking around with a lovely large eye and alert expression, sporting crazy zig-zag underparts all the way to the undertail, and casually holding a grub in its outlandishly long bill, was an immature Blue Rock Thrush!

I'm not really sure how I knew what species it would be, but I had read the finder's account of this spring's Essex bird in Birdwatch magazine only recently. I'd looked longingly at photos of that bird and of the species in general, imagining finding one here. And here I was, looking at one!

I had my camera on me and was shaking when I raised it, but I fired off about 20 shots. Then the bird flew down and away on the other side of the roof and I was thrown into a dilemma about what to do: get permission to go into the complex and try to relocate the bird, double check the ID on my photos or try to get a message to the other locals I knew to be out birding that morning.

I decided on the latter and hastily got my phone out. In the drizzle I sent a message to our village birders' WhatsApp group, then copied the message and texted it to Barry (whose phone is so ancient it can't use WhatsApp). I called Barry again, miraculously got through to him and he was on his way immediately. I needed someone else there urgently to verify that I wasn't just making it all up in my head! 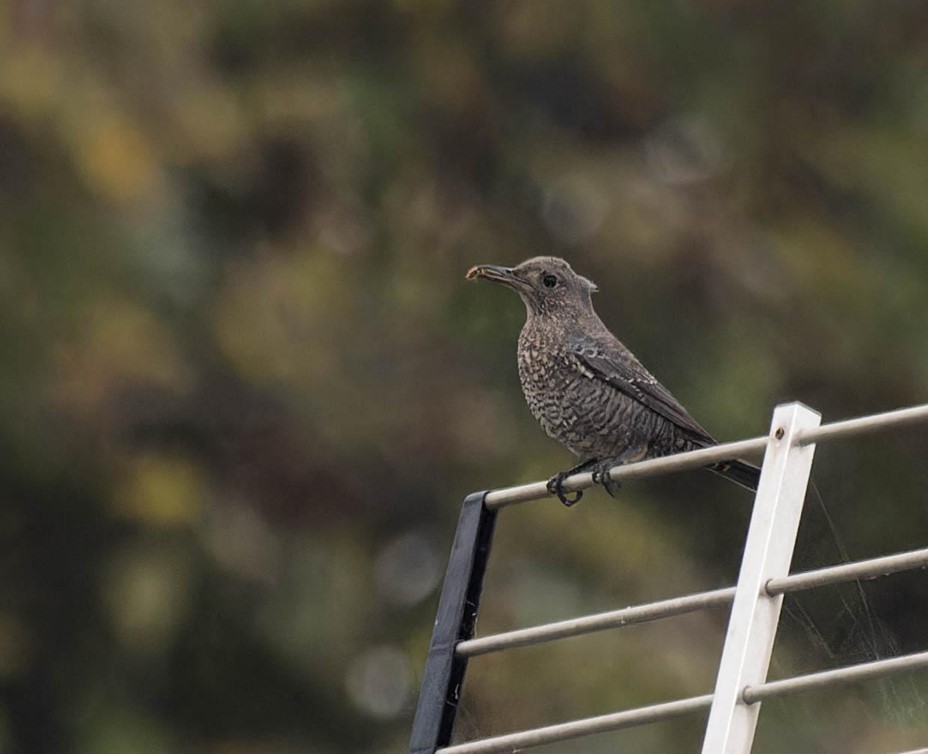 The Blue Rock Thrush marks the second county first that Sean has found at Winterton Dunes after the Black Lark in 2008 (Sean Offord).

By about 9.50 am several locals had arrived and we had all started searching but couldn't relocate it. By now it was drizzling steadily. Barry went to look on the rooftops along the road to the south of the complex while I and the others waited on the edge of Hermanus, hoping it was sheltering from the rain and might reappear. I was elated but also sad for the others as it seemed increasingly likely that the bird had moved on and I was destined to be the only observer.

However, just after 10 am, we relocated it. I fired off another shot before it dropped out of sight. Amazingly, it was still here! I wasn't sure of the status of Blue Rock Thrush in Norfolk and asked if there had been any previous records – apparently not. The bird was by now showing very occasionally, popping up on a different rooftop each time, and disappearing for long periods.

It gradually dawned on us that despite the access problems, we needed to try to release the news. We spoke to the Hermanus manager and negotiated access for a car parking fee, and at 10.50 am news was out. The first birders managed to get here within the hour and most who arrived through the morning were lucky enough to connect, but by early afternoon it had seemingly disappeared. Amazingly though, it was relocated later in the afternoon on the other side of the village where it was seen by a lucky few as it continued to play rooftop hide and seek. Sadly it was not seen the following day.

So 14 years after my somewhat obsessive patch dedication had paid off with a first for Norfolk, I had found another one! One Black, one Blue; I'm going for Asian Brown Flycatcher next, but on my current form it will probably be in 2036 …