It was 4.30 am on 12 May and I was about to start another dawn raid around my patch, The Naze in north-east Essex.

The Naze is a unique coastal landscape of outstanding geological, biological, cultural and heritage value. The word 'Naze' is from the old English word 'Naes', meaning nose or headland.

I was exhausted. This was my 72nd consecutive dawn start this spring, having covered more than 1,200 km. It didn't take long before the espresso started to kick in – that and the familiar sound of a singing Common Nightingale was all the bump I needed. Time to get on with it.

The wind direction had been a variable south-west for the last two days, dropping in multiple Spotted Flycatchers and a beautiful singing Wood Warbler, the latter normally a species reserved for early autumn.

I made my way north following the main path leading to the Naze Cliffs, pausing next to the bushes where the nightingale was blasting it out – he'd been at it for over a month. Scanning the brambles along the lower path I located a male Whinchat – a fine start, and the first grounded migrant of the day. Just a little further on past Sunny Point and I was overlooking the main cliffs, around 700 m of exposed Red Crag. This area certainly looks the part, but I have found it to be quite unproductive. I always expect to see grounded migrants, but more often than not it's deathly quiet, evidently just like this morning. 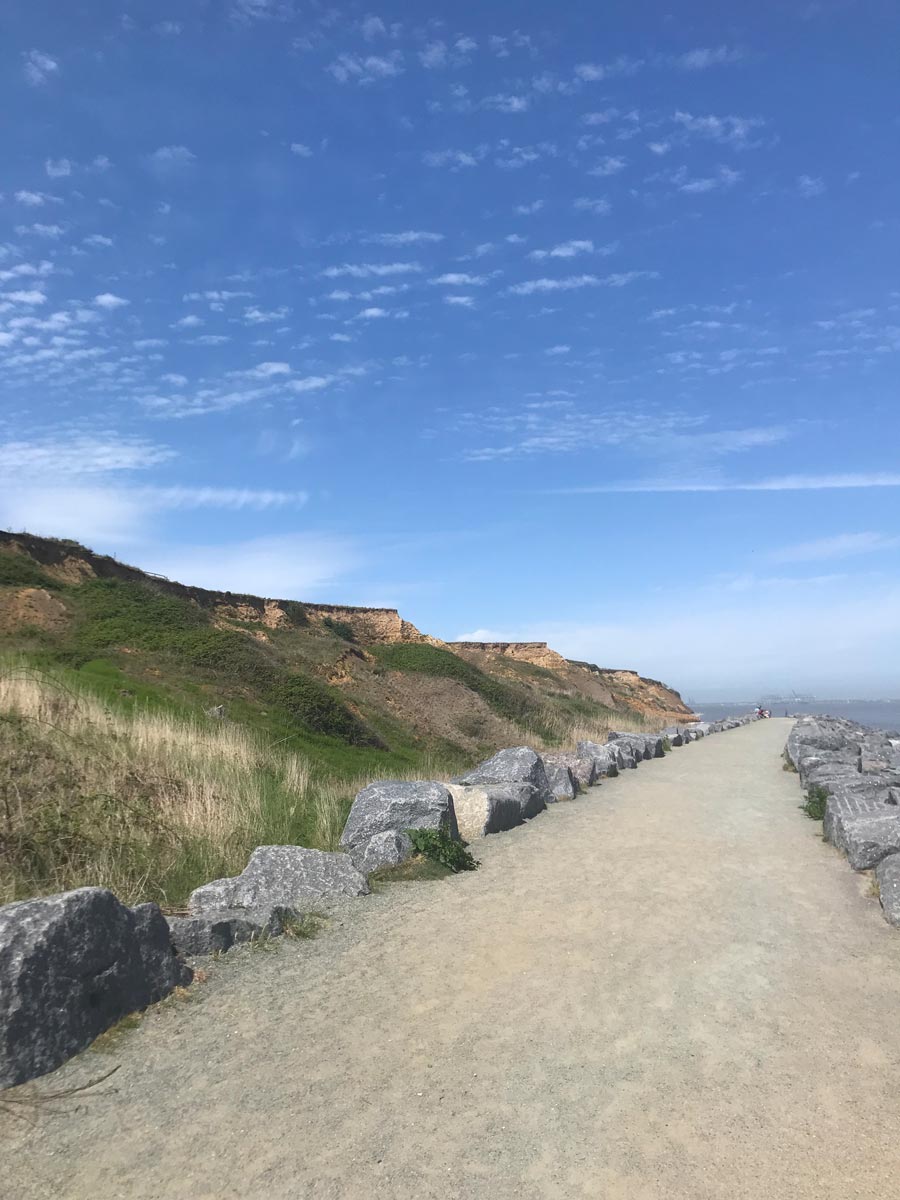 Cliffs at The Naze always look like they should hold migrants, but are often unproductive (Darrell Stile).

I gave it 10 minutes and then took the steep steps to the open common atop the cliff. Before I'd had a chance to catch my breath I spotted two Northern Wheatears, one on a bench and the other on a bin – typical – and, given the conditions, I surmised it could be a good day for counting this species. Up until now the spring had provided just the odd one here and there. I worked my way north, hugging the cliff edge, carefully checking its entire length, before turning my attention to the extensive dense habitat of the bushes at The Naze. But by 9.30 am, having searched every nook and cranny, all appeared to be calm.

I exited John Weston Reserve and made my way to the three-way junction where I had the choice of walking Stone Point or heading around the permissive path which borders Walton Hall Marsh. On this occasion I opted to walk the marsh first. Wheatears were out in force and by the time I'd finished my lap the tally for the day was up to 12, as well as a second male Whinchat.

Back at the junction, I ventured up the mile-long section of beach that is Stone Point, which is another good area for wheatears, or perhaps a Kentish Plover with luck. Approaching noon, the day was warming up and the cloud cover had given way to clear blue skies. In these conditions walking Stone Point can feel like a chore and it was plain to see that on this visit, it was devoid of birds. I left Stone and started doubling back through The Naze, deciding to re-walk the cliff edge back south. Peering over the escarpment, I was pleasantly surprised to pick up a group of four wheatears. A little further on I walked onto a precarious-looking section which juts out beyond the rest of the cliff.

Then I froze. Fifty metres to my right I caught sight of a bird flying north along the cliff face. In my head I'd already called it: perfect views, just slightly elevated above the bird, in what seemed like slow motion. 'It's a thrush, it's blue, dark wings ... what the hell, adult male Blue Rock Thrush!!!! I tracked it as it flew north before being lost to view. 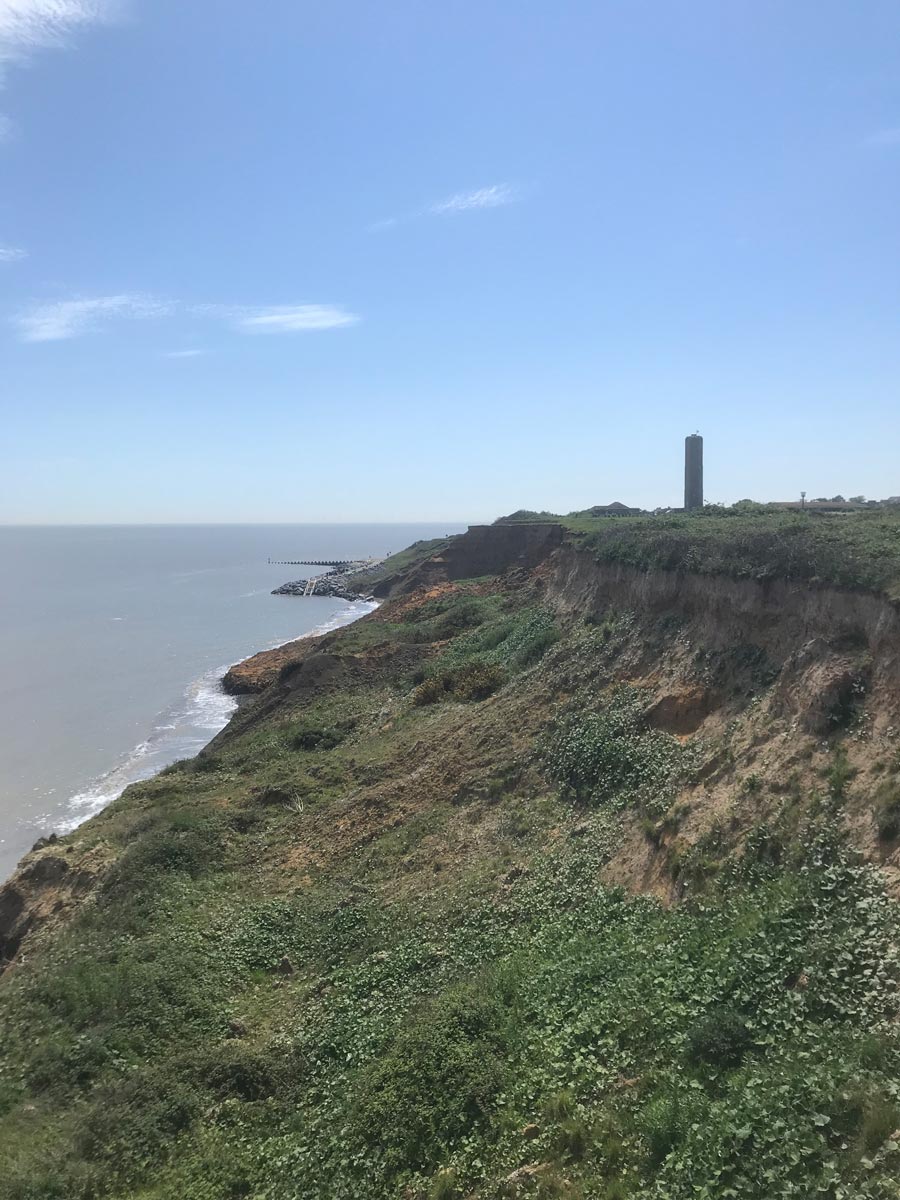 The area favoured by the Blue Rock Thrush (Darrell Stile).

I dropped to my knees, took a minute to consider what I had just witnessed and then got news out to Pete Davis and the rest of the boys from Holland Haven. Still in disbelief I set about relocating the bird, all the while second-guessing myself. I walked all the way to the northern end of the cliff, peering over the edge – no sign – then back south towards Naze Tower – again, no sign.

Scanning the length of Crag Walk, the granite tidal sea defence, I saw Dick Groves, a local photographer. I sent him a quick message and then carried on looking. By this point it was 45 minutes since I first saw the bird and I was getting a little anxious. Richard Jeffree was first on the scene, I filled him in and he headed off to try from the beach.

I wandered back north and out onto the precarious point, peered over and boom! The Blue Rock Thrush flew back north, right under my feet. Now it felt real! Wow, my eyes, blue, blue, blue ... 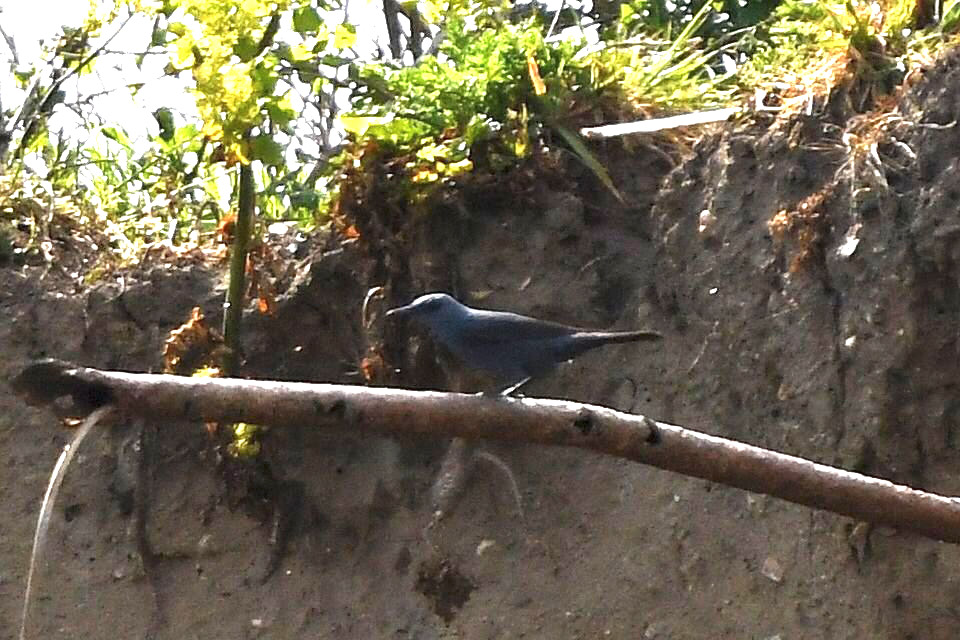 The light was harsh, but the blue plumage of the bird is nonetheless apparent (Dick Groves).

It paused on a mound of fallen crag, giving superb views and posing in perfect light. Unbelievable! I was completely and utterly gobsmacked. It was a truly stunning specimen, with entirely blue plumage, just a touch darker in the lores, blackish wings and tail, dark legs and a long, dark bill. You couldn't ask for more.

I put a message out to the group, looked up and in that time it'd gone again. Richard and Pete turned up and we started walking north, only for the thrush to reappear, flying south past us. We were thrilled to bits as we followed it in flight to rocks at the base of the cliff. I could see Dick Groves had connected and stood watching, begging him to get some shots off – which he duly did. 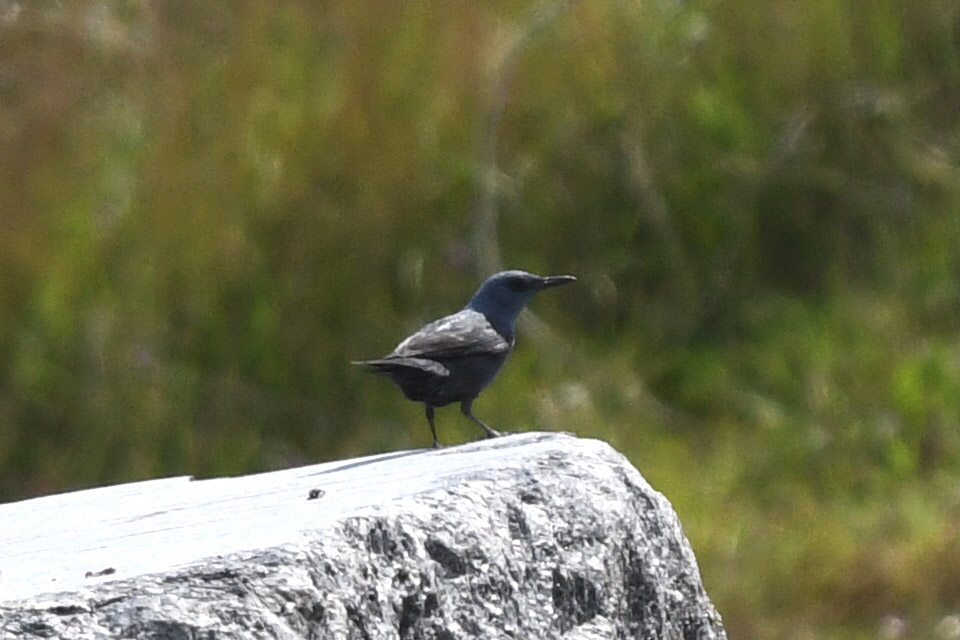 The bird clearly knew where it wanted to be and Pete had already suggested it would head for the crag rocks. Unfortunately, even at the best of times this area is very busy and once again we watched the bird take flight and land on a large tidal breaker. Legging it off the common and down the steps, a select group was treated to a nice fly-around, before the thrush again headed back north along the cliff. It was then seen one last time but not thereafter.

Never in my wildest dreams would I have ever considered finding a Blue Rock Thrush a possibility. What are the odds for a bird of this magnitude turning up on the Essex coast and managing to find this suitable habitat to stop off at? It just goes to show – be lucky!