Shetland’s west mainland was, until April this year, my local patch, and over the last six years I’ve grown to love birding it, working out the key sites and the best routes around them, and finding a few good birds along the way. Perhaps the best known of the ‘westside’ sites, and certainly the most productive in terms of rarities, is the Dale of Walls: a long valley which looks westward to Foula, and provides a variety of habitats for migrants.

On Monday 18 September I wasn’t really birding. I was doing my westside WeBS counts, the first of the autumn – a circuit that takes me as far west as Sandness, and loops around to the lochs by the village of Walls. At around the halfway point I pass the Dale of Walls and, if time permits, I always take the opportunity to stop and look around the best areas.

I’d already checked the first of the two main sites within the valley, and I hadn’t seen a single migrant, so I wasn’t feeling hugely enthusiastic as I pulled up at the houses at the bottom of the road. It was raining, and I was tempted to give it a miss, but after a few moments of deliberation I persuaded myself to check the croft and leave the burn, which runs westwards to the sea, for another time. I left my waterproofs in the car – I didn’t plan to stay outside for long – and walked through several large patches of nettles, pishing at the handful of rose bushes, before crossing into the small field to the east of the houses. Kicking optimistically at loose clumps of dead dockens, I made my way towards a small patch of Japanese knotweed, only a couple of metres square, on its own in the corner of the field. As I approached to within a few feet of it, I heard something crash through the middle, and saw a glimpse of what I assumed to be a thrush of some sort. But the bird doubled back on itself as it left through the back of the vegetation, and then perched, facing me, on a barbed wire fence, literally five metres away.

I’d imagined this moment many times before; over the last few years, I’d convinced myself that the westside was going to deliver something exceptional from across the Atlantic, and an American cuckoo was high on my wish list. But in my head it had never happened like this. It usually began with a fleeting glimpse of one or the other in the back of a tree, followed by a desperate struggle to sort it out before it disappeared. But here it was, just a few feet from me, giving absolutely everything away. It stayed put for what felt like 20 or 30 seconds – certainly long enough for me come to terms with what I was seeing, fire off a dozen photographs, and admire it again through my bins. Then it flew, but only to the other side of the same field, where it perched up on a fence post. I went around the back of the croft, approaching from the other side, and moved the bird one more time into a sycamore. 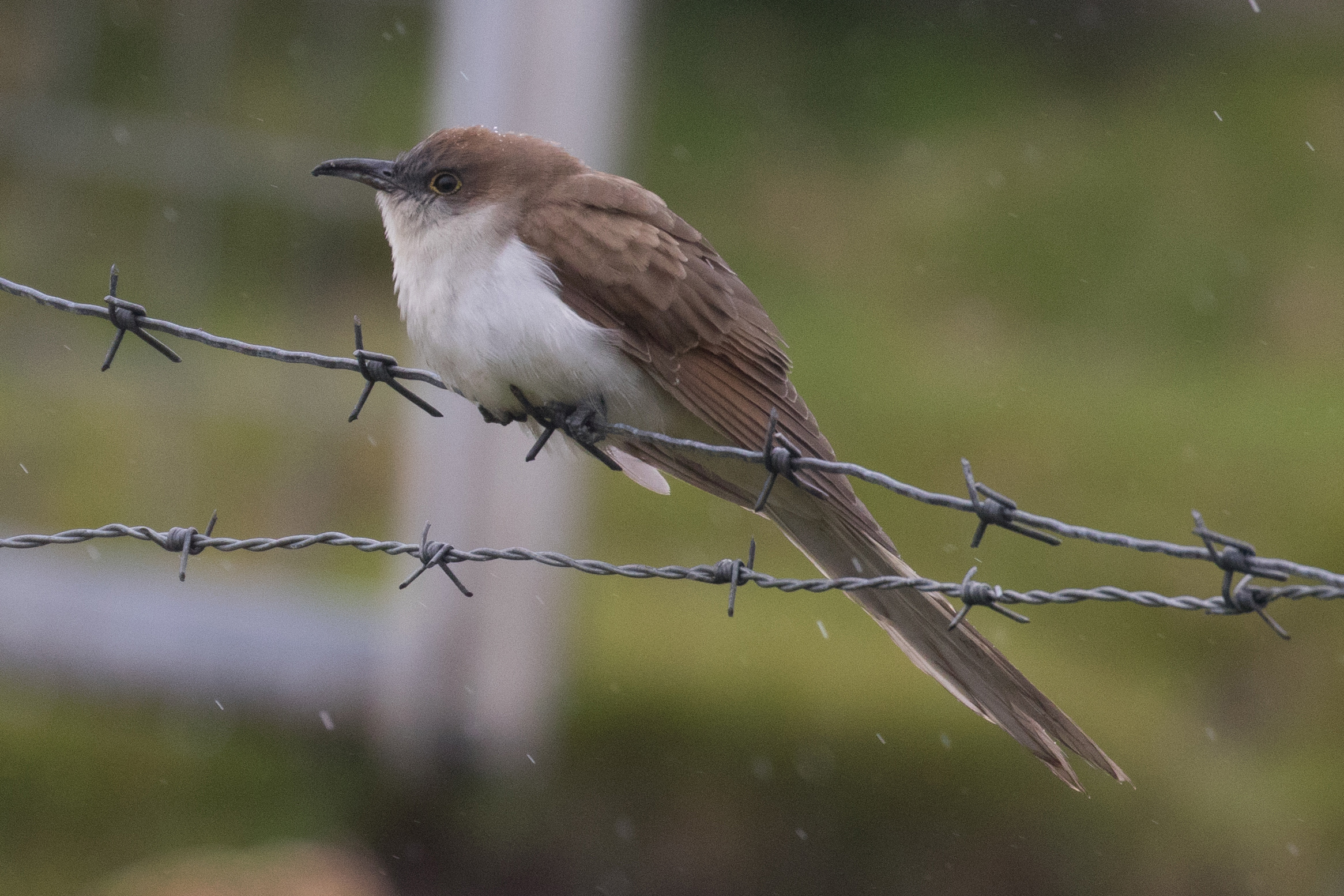 At this point I remember feeling remarkably relaxed, considering what I’d just seen – the bird seemed settled, it was unlikely to move far in the rain, and a quick scroll through my photographs confirmed that I had more than enough to nail it. I drove a few miles up the road to the quarry at Watsness, the closest place I knew I could get phone reception. It was only at this moment, as I picked up my phone, that I remember the magnitude of the situation finally hitting me. Yes, it was rare, but it was also an incredible bird, and one that every Shetland birder needed. My hand was shaking as I scrolled through my contacts for Roger Riddington’s number. “Get to the Dale of Walls now! I’ve got a Black-billed Cuckoo!”. I can’t remember if anything else was said, but a minute later I was on the phone to Paul Harvey with the same news. Those two have been the most regular companions on my westside forays, and both were soon on their way. Before I put the news out to the world, it occurred to me that I needed to inform the Dale of Walls residents that they were about to be invaded. Fifteen minutes later, and I was back at the quarry fumbling with my phone once again. “BLACK-BILLED CUCKOO around lower croft at Dale of Walls …” I stared at the text for what seemed like ages, my thumb hovering over the send button, before I finally persuaded myself to press it. I returned to the croft and waited …

Paul was first on the scene and, as the next arrivals were likely to be another 15 minutes away, we decided to try to pin it down in order to minimize disturbance. It was pretty much exactly where I’d left it, and provided one frustratingly brief flight view, before disappearing completely. Given its behaviour up until this point, and knowing the fate of most previous records of the species, my main worry was that it had gone to ground, deep in the vegetation, and died. It was a stressful 45 mins but, as the birders continued to arrive, I finally relocated the cuckoo in a lone willow, 50 metres down the burn. With the crowd of 30 or so birders assembled, I moved the bird back up the burn to the croft, where it would have more cover, a better chance to feed, and the observers would be more likely to get good views. 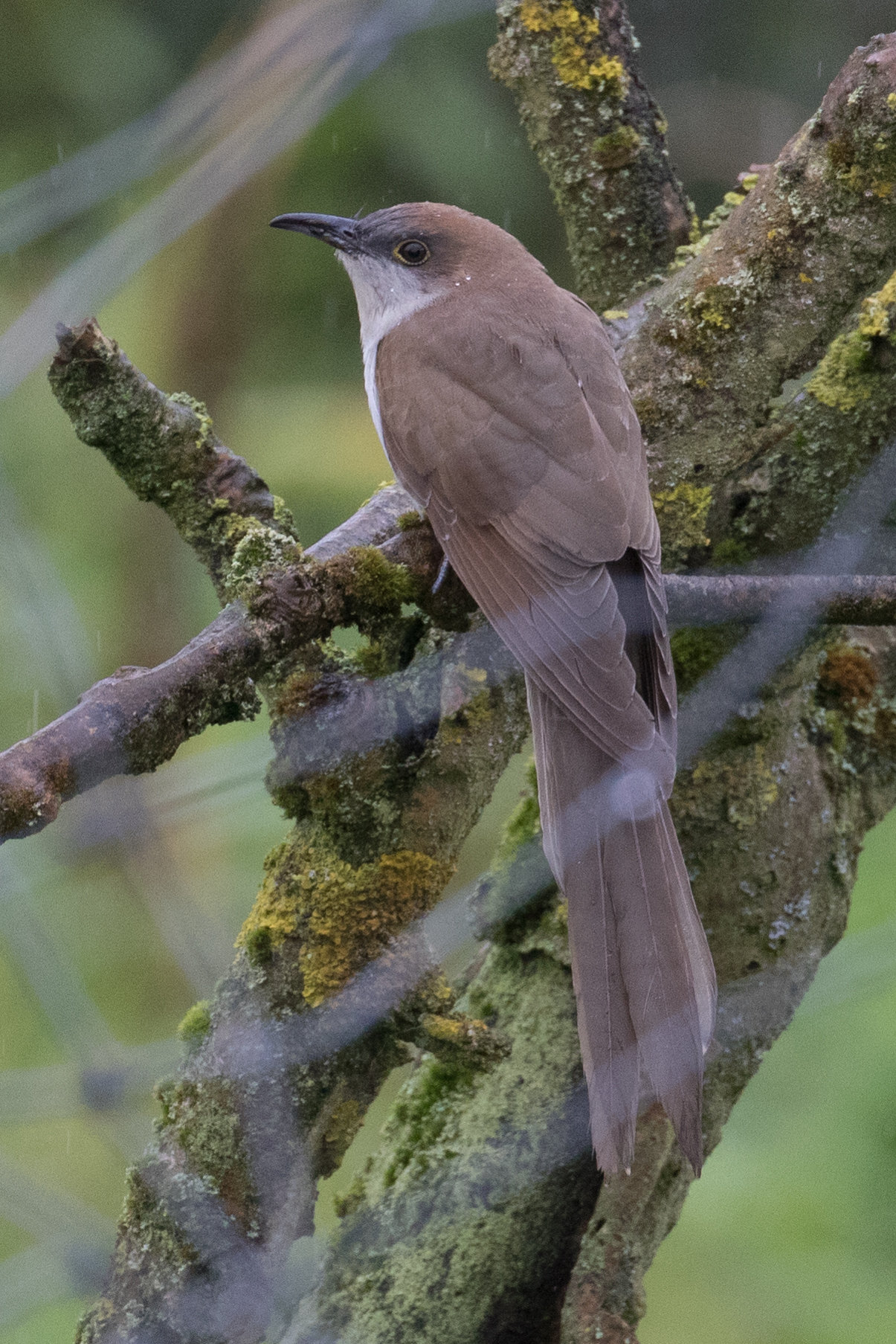 I stayed for another hour, trying to ignore the rain, which had now become annoyingly heavy at times. As the cuckoo stayed deep in Japanese knotweed, only occasionally giving itself up, it seemed clear to me that my initial views of this bird were going to be the best. Reluctantly, I gave in and left the crowd, to continue the rest of my WeBS counts. Typically, the bird became more visible after I’d left, often seen clambering around in the upper canopy of the knotweed, and managing to feed, mainly on craneflies and their larvae. It was not seen the following day. I’d like to think, having made the journey across the Atlantic, that it’s still out there somewhere, but sadly the statistics are stacked against that theory. 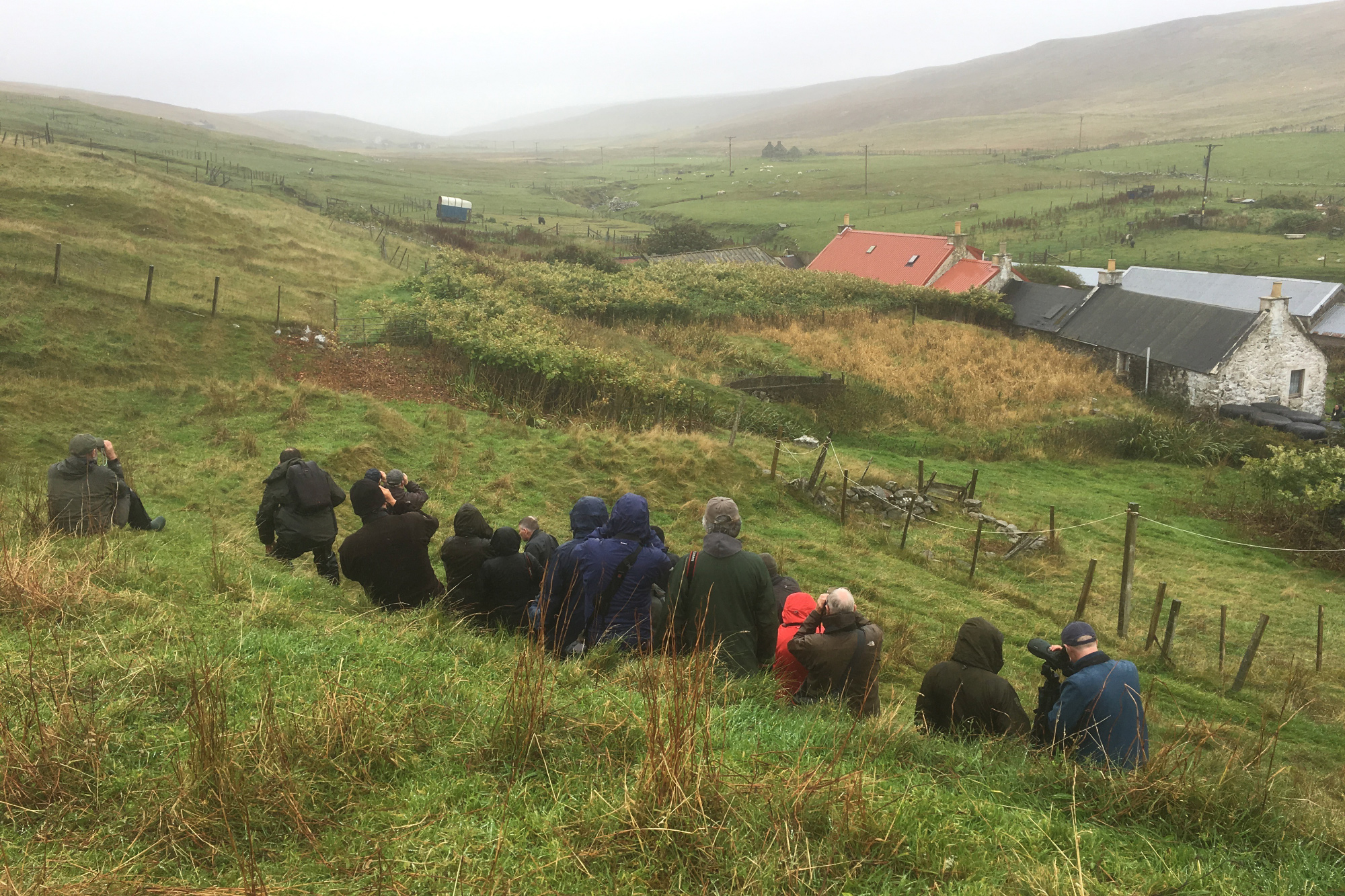