I always keep a keen eye out for anything strange or new in west Beara. On 9 November I was out at Dunboy and the cackle of Jays started in the Holm Oaks along the path. They always seem to evade my approach and with their beautiful colours are a unique subspecies in Ireland. In Irish, Jay is known as scréachog choille, which roughly translates to "young forest screamer" – and is probably not about to win any avian song contest, as the name suggests.

Then I heard an unusual rattle from the trees over the water. I saw a flash of dark and white and I assumed a Magpie was having an argument with the jays. The behaviour and call were odd so I automatically took a few photographs (a digital phenomenon, no longer constrained by the cost of film). I then lifted my binoculars to see a bird perched on a branch above the sea with a noticeable crest and a large, long and stout beak. 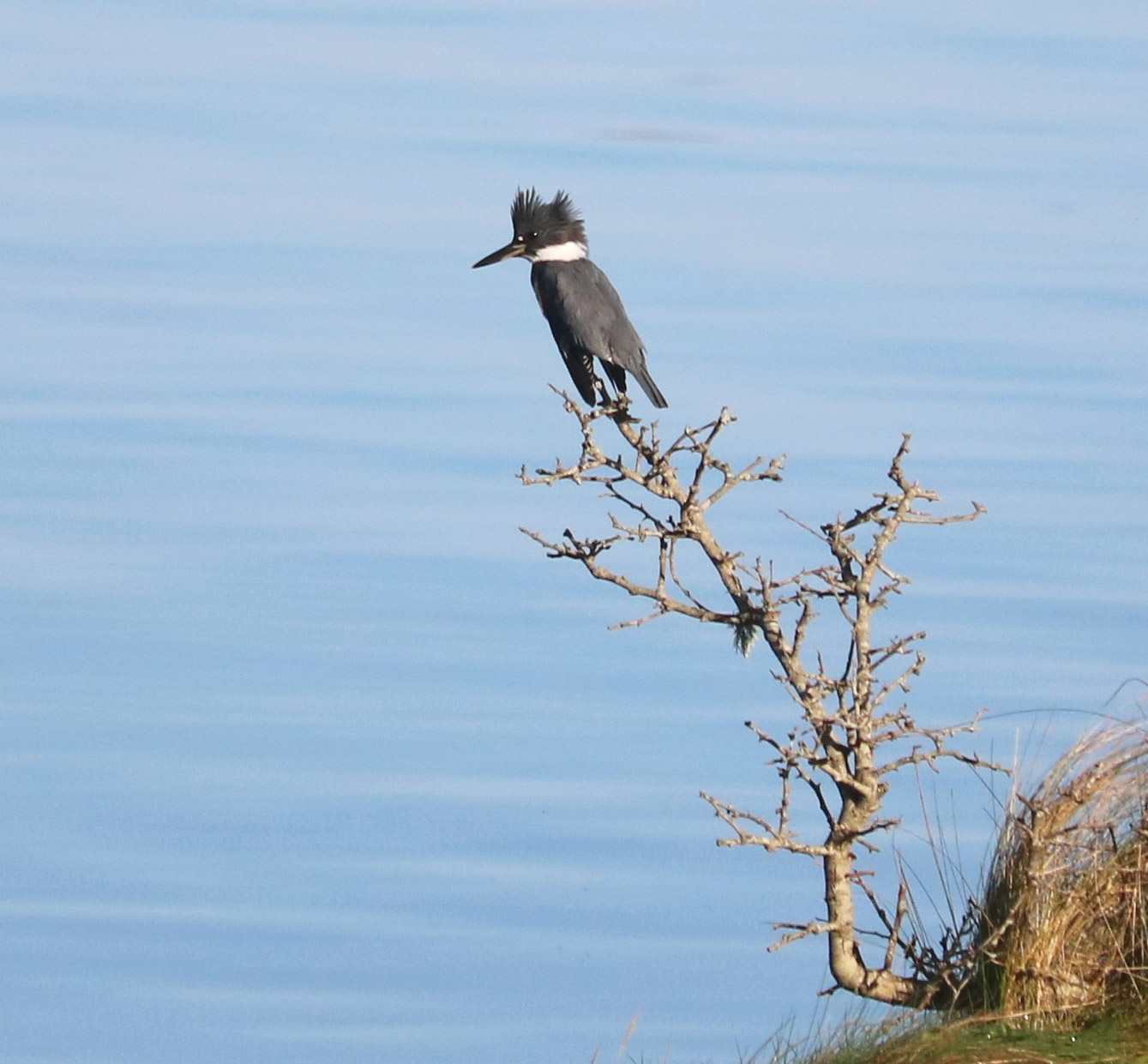 Patrick's first view of the Belted Kingfisher saw it perched up on a branch overhanging the bay (Patrick Lyne).

I tried to get closer, taking photos every 2 m, but the bird flew away back up the path. I stayed put and waited for it to come back as the direction he had chosen to fly didn't offer suitable fishing grounds for a kingfisher (which I was sure it was). It dutifully came back for some photos and once I had these I rushed back to the house to check my bird books. I reached for the old favourite, the Hamlyn Guide to the Birds of Britain and Europe. A gift in 1972, with the price mark still on it. Going straight to kingfisher section there was nothing remotely similar, so I turned to Google, looked up 'American kingfisher' and Belted Kingfisher came up.

It was beyond doubt. A bird common in North America and the Caribbean but that has only been recorded in Ireland on four previous occasions, the last in 2012. The two earliest sightings, in 1979 and 1980, were sadly shot. This bird has at least for now taken up residence in an area frequented by local Common Kingfishers, which I confess I think are far more pleasing on the eye, if less exotic. The 'belt', a band across the breast, is blue-grey with a distinct rust-orange colouring through it. The secondary band of the female is and therefore after much discussion it seems to be a male, and due to the changing band colour, a juvenile, similar to the last individual seen in Co Galway in October 2012. 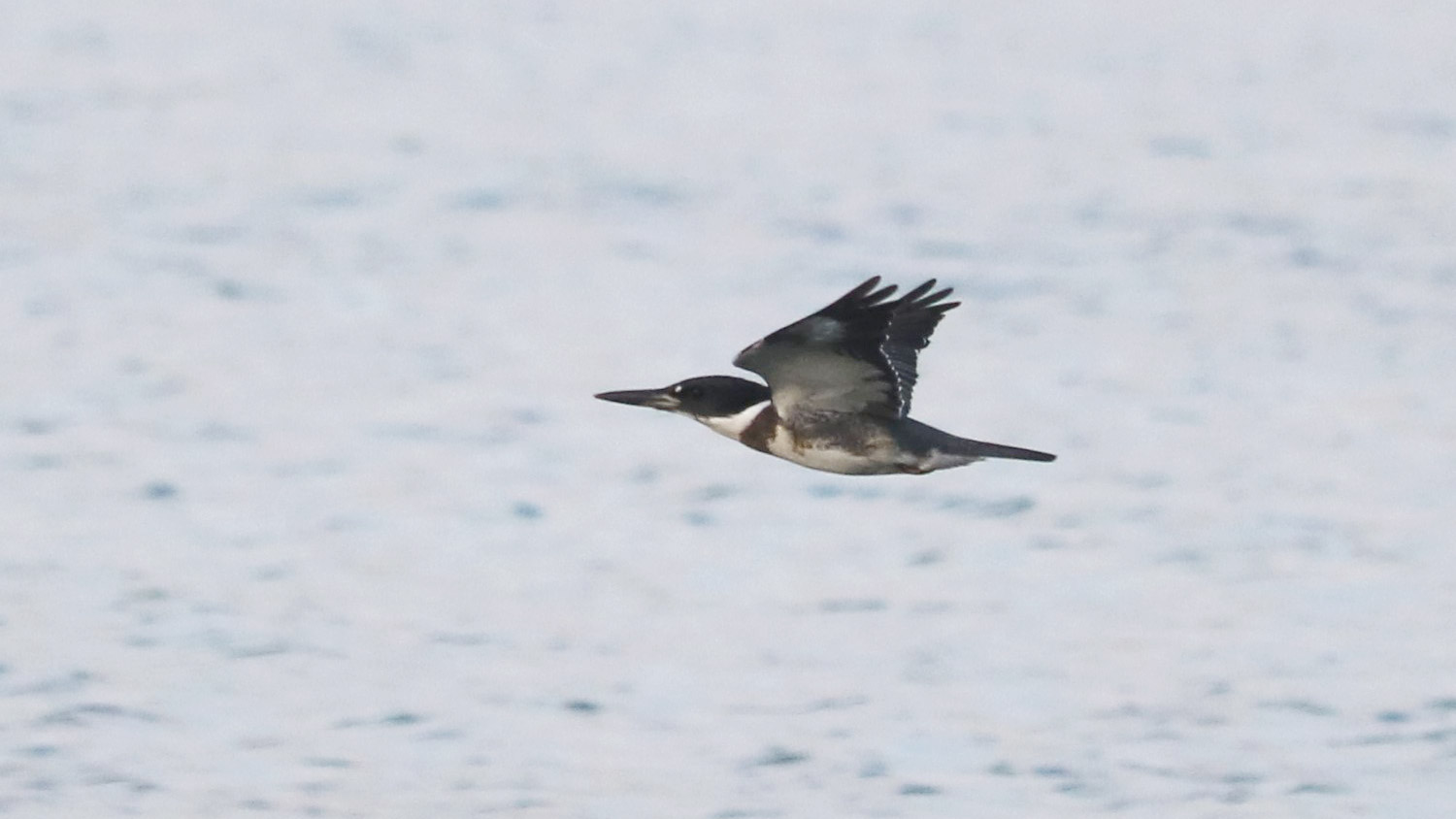 The kingfisher can be sexed as a male, for it lacks the second chestnut breastband seen in females (Patrick Lyne).

The Belted, buoyed by strong winds on a 3,000-km journey arrived healthy and well and presumably will remain here for some time. It has been present for almost three weeks now and has been seen at various locations along a 3-km stretch of coast and estuary with overhanging trees. It seems to have little difficulty in catching fish here, sitting on branches overlooking the calm water and fishing in the same sheltered bays as our native kingfishers – although it can be easy to overlook it due to the profusion of rhododendrons along the shore.

Belted Kingfisher is widespread across North America, with northern populations migratory, wintering south to the Caribbean and northern South America. It remains a very rare vagrant in Europe, although there has been a recent upturn in records with increased coverage in the likes of the Atlantic islands (especially the Azores) and the south-west European mainland.

There are four previous records from the Republic of Ireland, the most recent of which was in Co Galway on 5-6 October 2012. Further occurrences include a single from Northern Ireland, shot in Co Down on 12 October 1980, and four previous British records, including a famous male tracked from Staffordshire to Aberdeenshire in early April 2005 and another on St Mary's, Scilly, in April 2018.