My boss first introduced me to birds, mainly raptors, some 10 years ago. Once you stop to look and listen, a whole new world opens up to you. I enjoy taking photos, but I have no idea what I'm doing and it's usually down to luck and the camera and lens! Fortunately, my partner shares my interests, so we set about putting some owl boxes up and from that point I was hooked. 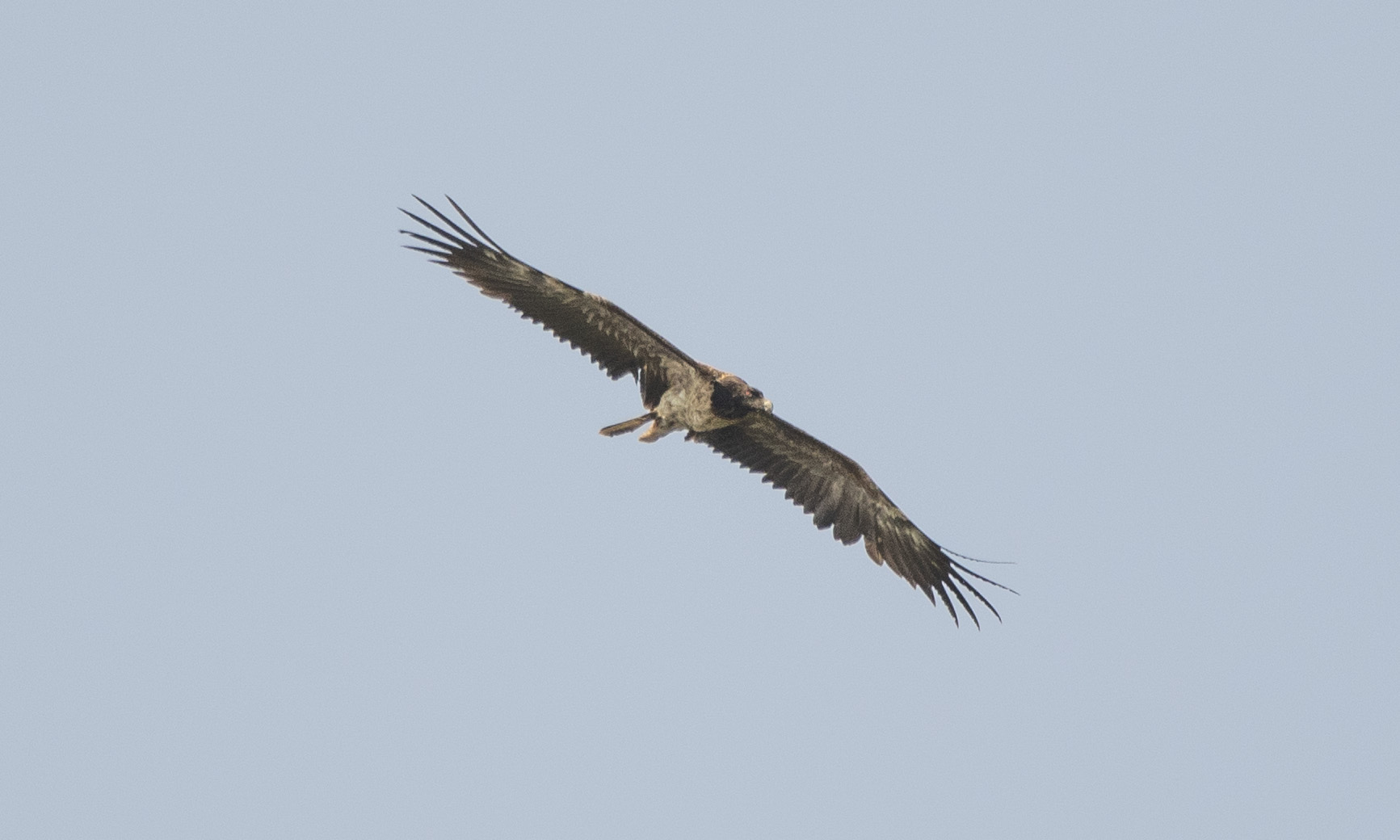 The immature Bearded Vulture was reported in Derbyshire an hour and 15 minutes after Lucy saw it fly over her West Midlands garden at 3.40 pm on 27 June (Lucy Burrell).

Roll on some time and we recently moved to Balsall Common, West Midlands. It seems like the wildlife follows us. With lockdown and three months of being furloughed during spring and summer it was like the world was reborn – roads were silent and the sky had no air traffic apart, from the odd Lockheed U-2 spy plane, RAF Atlas and Globemaster. My senses became attuned to sounds of the birds. I'm no expert, but I'm beginning to learn different songs and I recognise when something new is in the garden.

During this time, we had Eurasian Sparrowhawks, Eurasian Hobby, Common Kestrel and Red Kite daily, as well as owls, plus breeding finches, tits and other common garden species. I had all the time in the world to just sit and photograph them. I'm back now at work, but fortunately I'm doing so from home and am usually on the laptop with the French doors open.

I know that across the fields from us there are Common Buzzards, which we also see daily, with juveniles. At approximately 3.40 pm on Friday 26 June, I suddenly heard alarm calls from them, along with the local Swallows making a racket. This usually means there's a stranger in town. I grabbed my camera, which is always next to the window, and ran outside expecting to see our regular sparrowhawk. 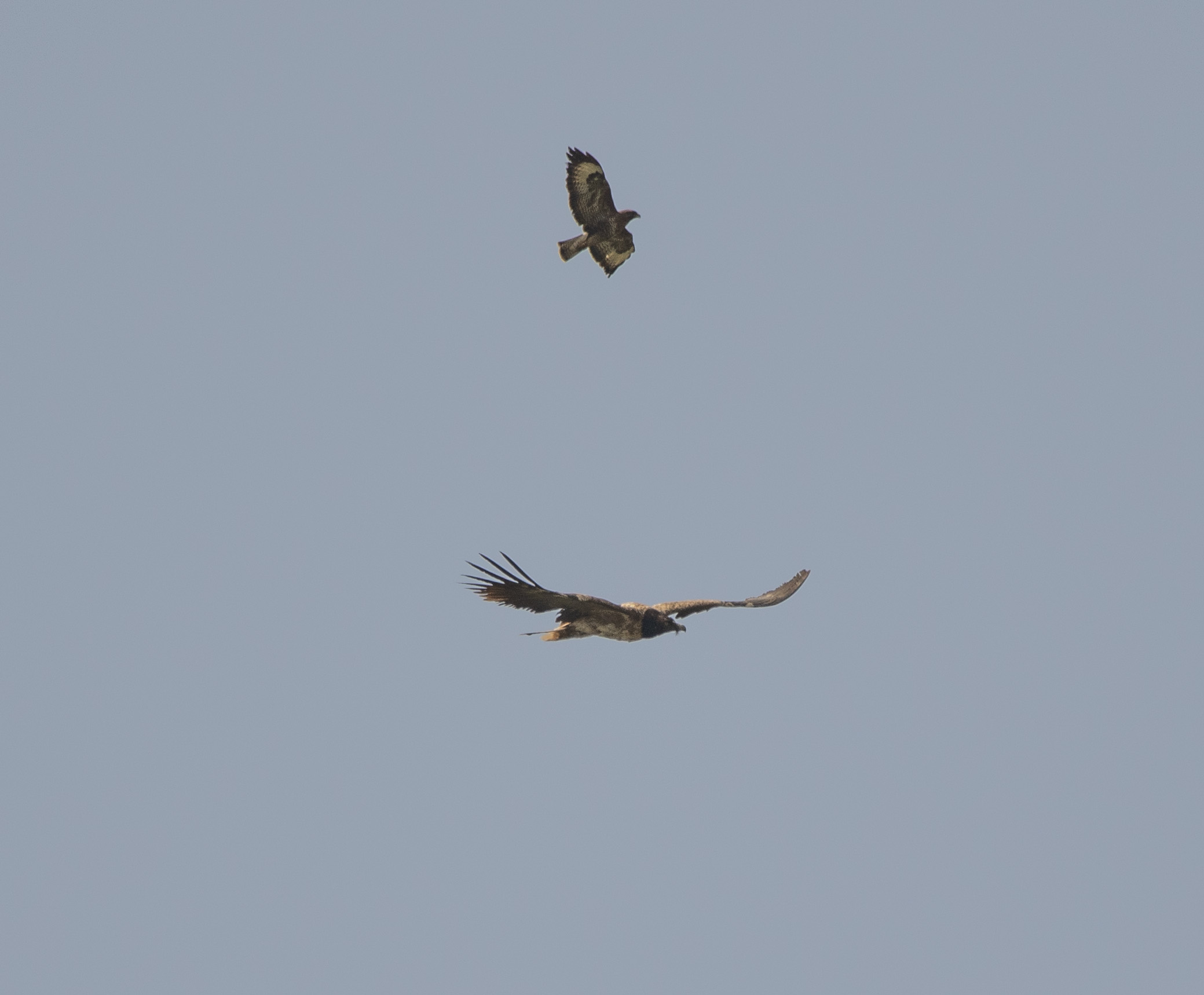 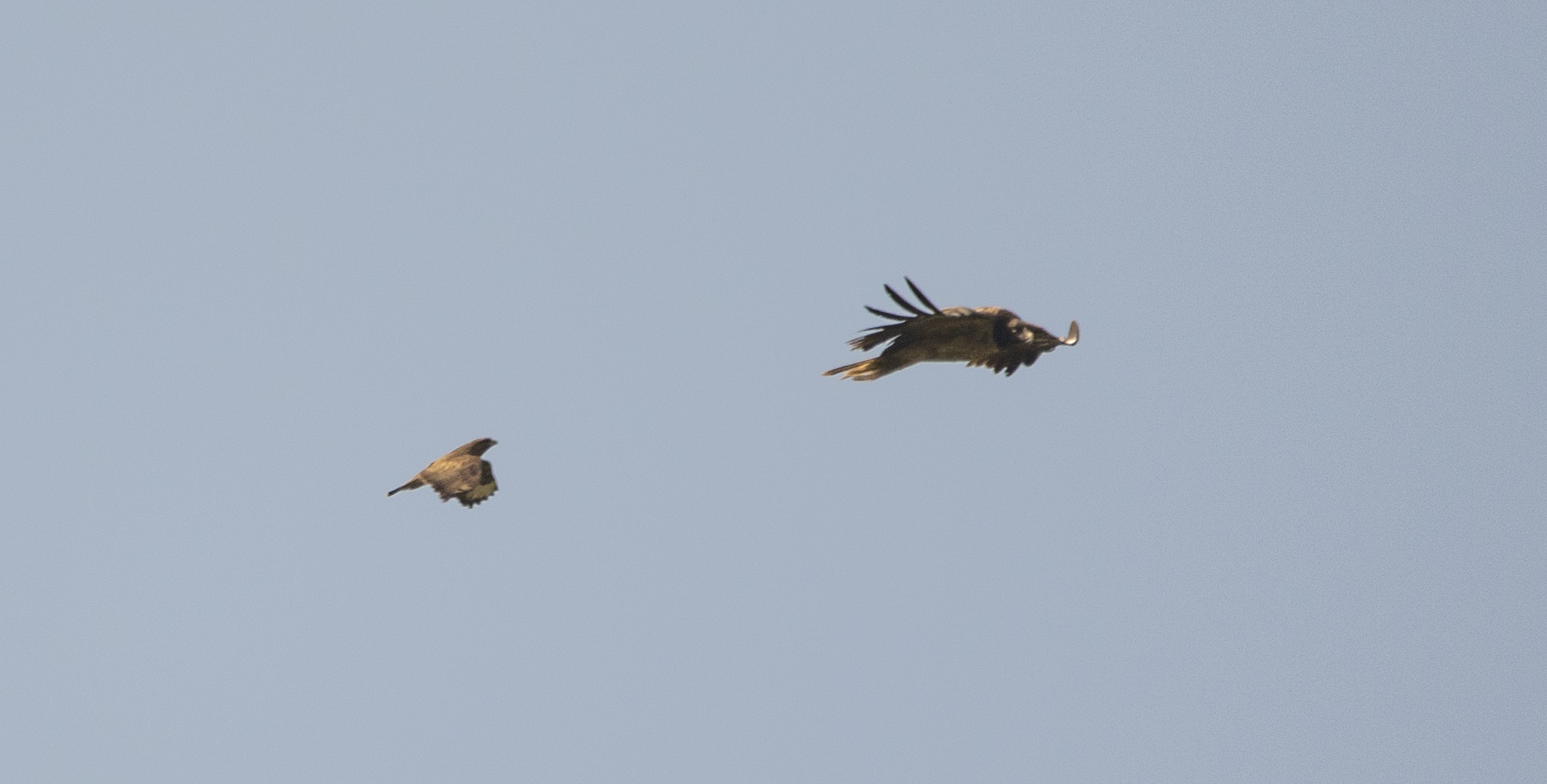 The colossal size of the vulture is depicted in these photos, in which a local Common Buzzard is mobbing it (Lucy Burrell).

However, I looked up to see something unfamiliar that I could not comprehend. I had no idea what settings were on the camera, but I just started shooting. At first, because it was so high, I had no clue as to the identification of the bird, but with the buzzards and Swallows mobbing it I could see that – whatever it was – it was the biggest thing I'd seen in British skies!

At first I thought it had something hanging out of its mouth (I later realised it was its 'beard'). I watched it soar through the sky heading north over the village – it was amazing to see. I immediately ran in to examine the photos, just as my partner walked through the door. I won't repeat my exact words, but told him what I had just seen. 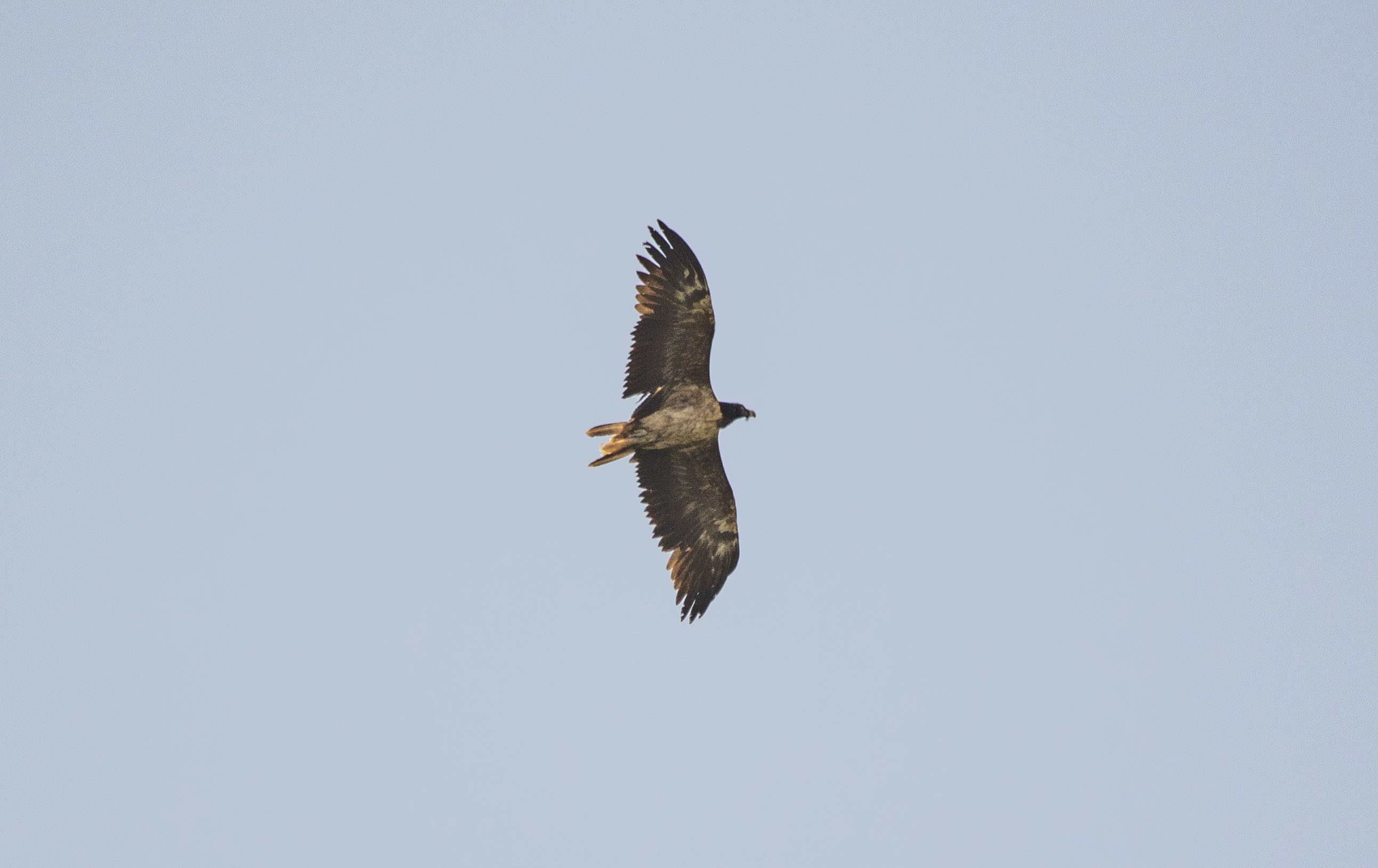 The vulture's distinctive tail damage confirmed it as the same immature last seen in Belgium on 20 June (Lucy Burrell).

Initially, I thought it could have been an escapee from Warwick Castle, but it soon turned out that this was not the case – it was an apparently wild Bearded Vulture. There was an outpouring of excitement on social media once I uploaded photos of my vulture and I feel very honoured and grateful to have seen and photographed this amazing bird.

The Bearded Vulture photographed by Lucy in West Midlands airspace is very distinctive in that it has lost several of its tail feathers, thus lacking the charismatic diamond-shaped tail normally shown by this species. This abnormality makes it immediately recognisable as the same bird as that seen in The Netherlands at Borger, near the German border, on 30 May, west of Nijmegen on 11 June and then over Utrecht on 13 June. It then moved to Belgium, being observed near Bruges on 18 June and then over the Ghent area on 19th and 20th (see e.g. here).

What's more, close analysis of photos of the bird also show it to be the same individual as that seen earlier this spring at several sites in northern France, which also visited Alderney, Channel Islands, on 20-21 May. Although the tail has evidently suffered considerable damage in the four weeks since its Alderney appearance, there are several tell-tale plumage features that readily identify it as the same bird. These include the pattern of pale feathers on the underwing primary coverts on both wings, the pale axillaries, breast pattern and, in terms of wear and moult, the notch missing from the inner secondaries on the bird's right wing, plus the distinct damage to p6 on its left wing and p7 on its right wing. 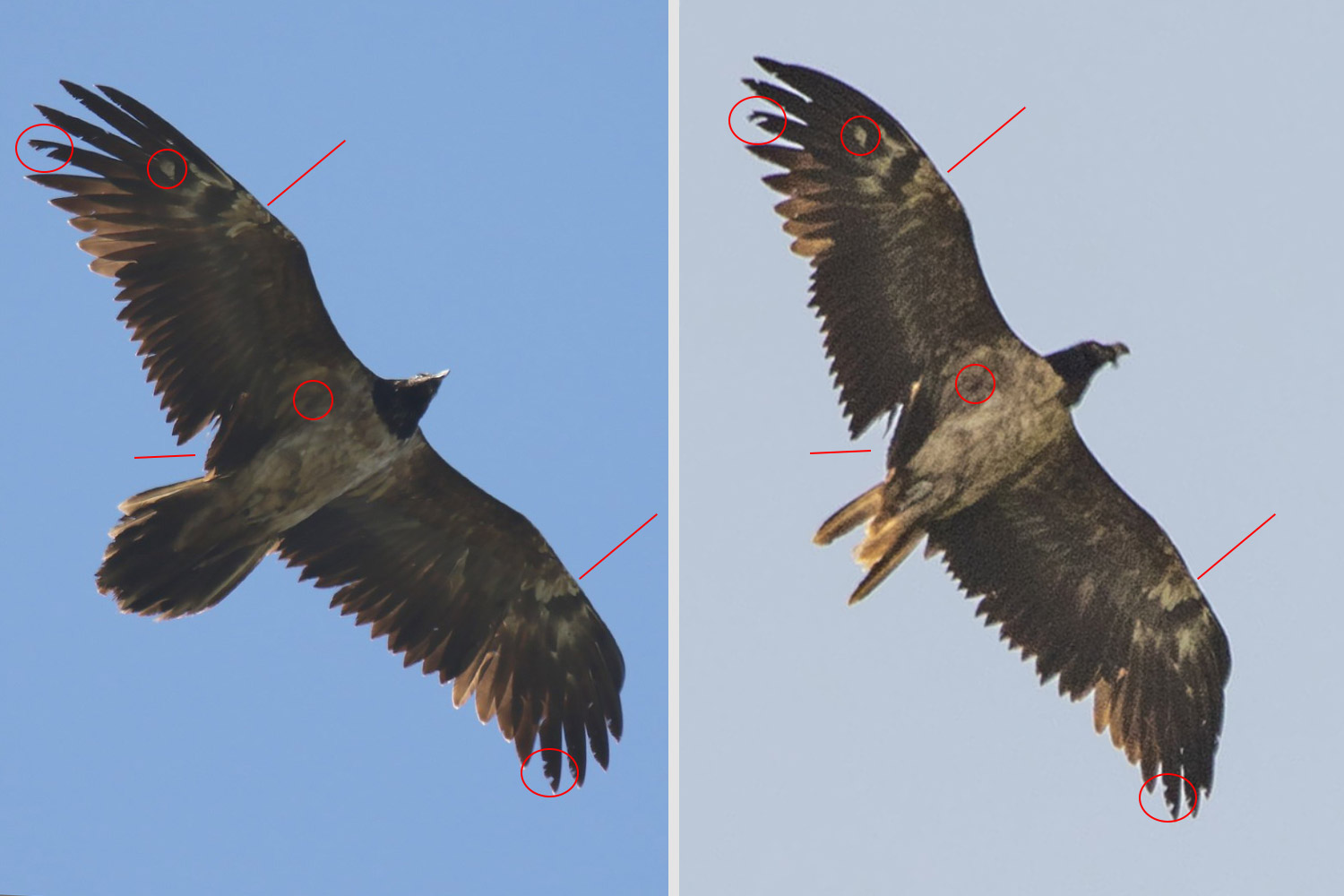 Photo comparison of the immature Bearded Vulture on Alderney on 21 May (left; photo by John Horton) and over Balsall Common on 26 June (right; Lucy Burrell). Several distinctive plumage features have been highlighted, while similarities in the breast markings are also apparent.

Curiously, this remarkable discovery mirrors the first Bearded Vulture to reach British shores in May 2016, which was also a second-calendar-year bird. First reported near the M4 bridge at Sudbrook, Gwent, on 12 May, it was later seen in Devon at Brent Moor on 16th and Cookworthy Moor Plantation on 20th before being photographed over Breney Common, Cornwall, on 23rd. There were several other reports of the bird from southern England during this period, and it later transpired that the Gwent sighting was pre-dated by an observation, with photos, from Kent. As with the 2020 individual, this bird had previously been seen in Belgium a few days before crossing the Channel and entering English airspace.

Considerable uncertainty surrounds the origins of wandering immature Bearded Vultures in Europe. Ongoing reintroduction schemes in the Alps and Pyrenees mean that there is some doubt that such birds have truly wild heritage. Indeed, the 2016 bird was duly consigned to Category E of the British list by the BOURC (more here). However, all released vultures possess radio transmitters and show several bleached flight feathers in order to identify them, the latter of which should still be apparent in a second-calendar-year bird such as those recorded in Britain in 2016 and 2020. Significantly, neither showed such a feature, nor did they possess a tag, which suggests that both were wild born. The issue for the BOURC, however, is the unknown as to whether such immatures are direct offspring of reintroduced or truly wild birds, hence the stumbling block with admission to Category A.

Whatever this bird's origins, there is no doubt that it makes for a spectacular sight to see in British airspace. Given that Britain has now been graced by two birds in a five-year spell, and that records on the Near Continent are on the up as European populations of this iconic bird consolidate and increase, it may well be that further vagrants follow in the coming years. 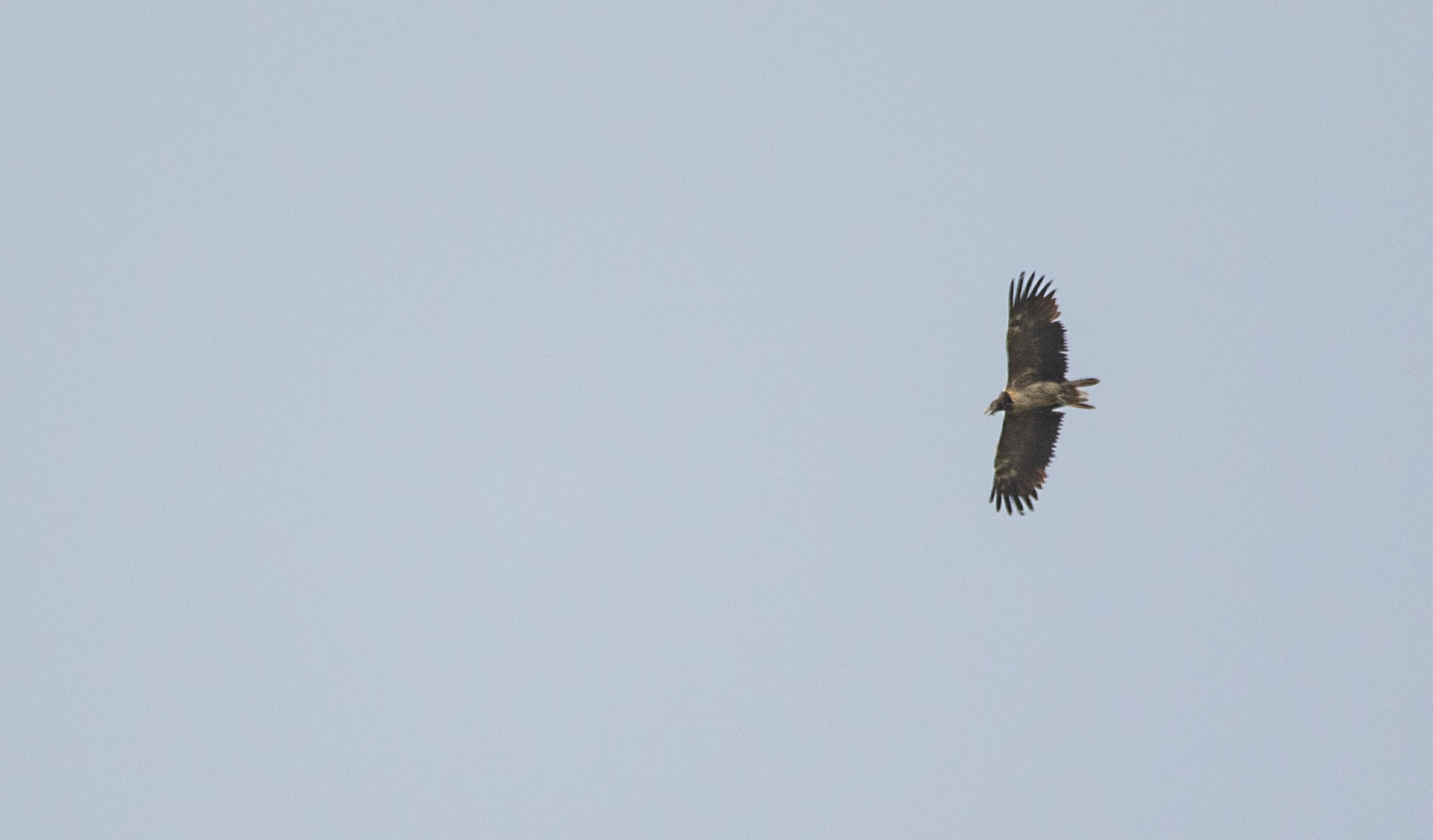 As of late afternoon on 29 June, there had been no further sightings since that near Scropton at 4.50 pm on 26th (Lucy Burrell). 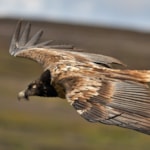