Since mid-June, up to 2,000 Lesser Black-backed and second-year Common Gulls have been commuting between the River Humber at Barton/Read's Island to feeding areas on the Wolds where organic waste is being spread on fields. These birds are never easy to watch, as they only pause to bathe on the pits, though recently some birds became more accommodating. From the 18th, occasional second-year Mediterranean Gulls started to appear, with a sudden rise to six birds (including one third-year) on the 26th. On the evening of the 28th, I set out to have a good search through the increasing number of gulls, having been swotting up on Caspian Gull. 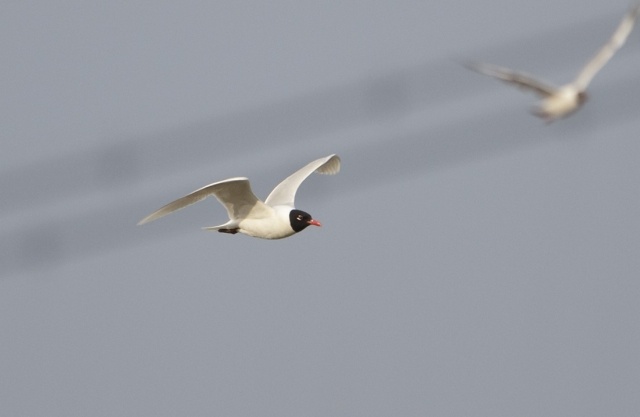 The gulls were resting at Chowder Ness, west of Far Ings, finally providing good views. A couple of Yellow-legged Gulls and an adult Herring Gull with a crossbow bolt through its head started off the discoveries.

As I settled down to search further, most of the large gulls flew off; a good start. The remaining flock of Common and a few Black-headed Gulls was searched and two adult and five second-year Mediterranean Gulls were present. As most of the birds were resting almost head-on to me, they were not easy to identify when asleep. It was thus rather fortuitous that one gull suddenly raised its head and presented what appeared to be a fine black bill, but as soon as it did this the head went back into its mantle. Even then, the nape was clearly grey, and a fact learnt on Teeside in 1977 (and reinforced across the pond) suggested that this was a bird worthy of further scrutiny — but it failed to move for the next 40 minutes! 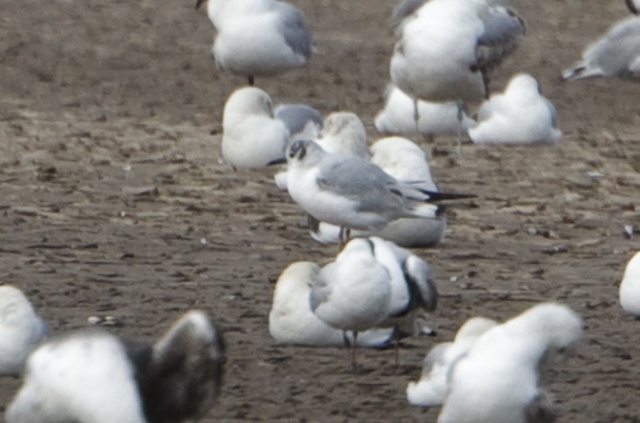 I phoned a couple of local birders putting them on standby, not wishing to set off a mad dash for just an odd gull. After an hour, the bill reappeared and the black spot and crescent on the side of the head, combined with the bill and grey nape, convinced me that this was indeed a second-year Bonaparte's Gull. This fact was put beyond all doubt when it finally stood up to reveal the short pale pink legs and, for the first time, its obvious diminutive size compared to the adjacent Black-headed Gulls. 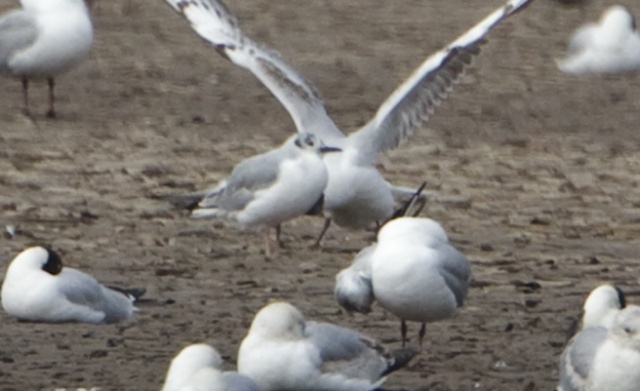 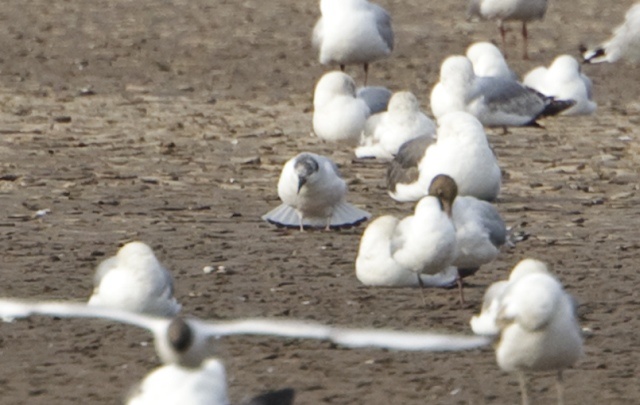 The Bonaparte's hardly moved in the next three hours, in spite of my assumption that the gulls would leave for their roost much earlier in the evening, spending most of its time asleep. At about 20:00, while I was looking at the Bonaparte's through the scope, a 'common gull' standing right next to it struck me as looking strangely pale on the mantle. As it turned its head, a large pink-based, black-tipped bill shouted Ring-billed Gull — logic dictated that this was a silly assumption, but I mentioned it to others present. The more we looked, the more the realisation dawned that we did have two Nearctic gulls standing together on my local patch: the second Bonaparte's and fourth Ring-billed for Lincolnshire! At 21:55, the Ring-billed flew off towards Read's Island mudflats to roost and was quickly followed by the Bonaparte's, eventually revealing the white underside to the primaries and the black-tipped primary coverts. 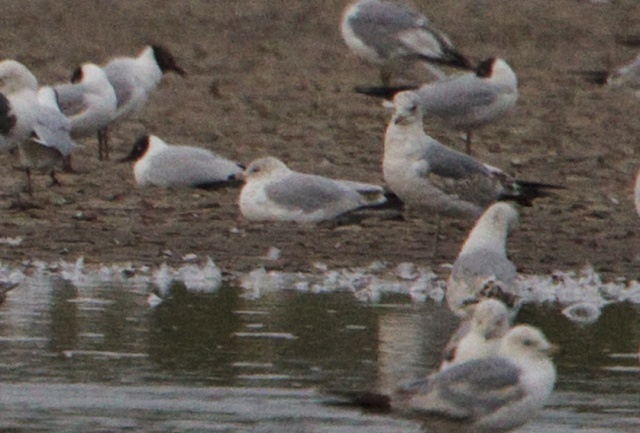 The following morning revealed a grand total of one birder looking for these two gulls at Chowder Ness. This amazing lack of interest from Lincs birders seems typical of the recent state of birding. Now, had one of us located the bird that morning and put the word out, I wonder how many birders would have suddenly materialised? It seems symptomatic that people just want to wait for news then arrive without the effort of searching for a bird — these gulls are part of a huge population that comes and goes from the Humber and to stand a chance of finding them you would need to put in many hours. Has birding changed so dramatically that with the easy supply of information and huge numbers of people travelling to see rare birds, it sadly remains a fact that the number of people actually looking for birds has most probably decreased! In fact, the number of rare birds seen in the county annually seems at odds with the search effort.

Some are, of course, due to the 'Patagonia picnic table effect' — Patagonia being a famous rest-stop in southern Arizona where rare birds often occur and it was quickly noticed that birders travelling to see a bird soon found other rarities, snowballing the search effort and subsequent finding results. But generally, other finds are becoming more concentrated on honeypot reserves like Frampton (called the 'Gunung Gede effect').

Several authorities have stated that this Bonaparte's Gull was a Lincolnshire first but it is in fact the second record, with the first co-found by me at Grimsby Docks in March 1979. However, following some deep soul-searching well after the event, I decided that I was not wholly happy with the record. Although the bird most probably was a Bonaparte's, it was a fly-by only, and I was in deep assessment mode! I communicated my concerns to BBRC and they issued a statement in the 1992 report to the effect that the record was no longer supported by me. My co-observer, Mick Mellor, was still happy with the record and his notes fully supported the identification and thus it remained accepted. It is therefore somewhat bizarre that having removed the bird from my Lincolnshire list myself I have now replaced it with another one!

There have only been three previous county records of Ring-billed Gull, the first of which I also found at Bagmoor in 1988! The others were both at Whisby Pits — an adult in April 1990 and a second-year in April 1992.

Subsequent to the sightings on the 28th, the Ring-billed Gull has been seen on the evenings of the 29th and 30th but only after 21:00, while the Bonaparte's seems to have moved on. The running total for Mediterranean Gulls now stands at 16+ with a rapid turnover of birds being typical of the mid-summer period. On the 30th, there were 13 Mediterranean Gulls, at least five Yellow-legged Gulls and the first two second-year Caspian Gulls of the year.

Along with a fine adult Little Gull and a single Great Black-backed Gull, this took the week's gull species tally to an incredible 11 — but what next?