Asian Desert Warbler is one of those species that has an 'old-school' rare element of mysticism about it. Indeed, for any millennial or below birders, it has simply been unobtainable – the last record was a single-observer individual in Kent in 2012, with the previous twitchable example back in 2000.

So, when Mike Carr discovered one on Holy Island, Northumberland, and the bird chose to play ball and hang around a while, it inevitably sparked the biggest twitch of 2020. Mike takes up the story: "Monday 15 June will live long in my memory. I'd taken the day off work to pin down some Merlin nests in The Cheviots, but heavy fog had put the mockers on that. 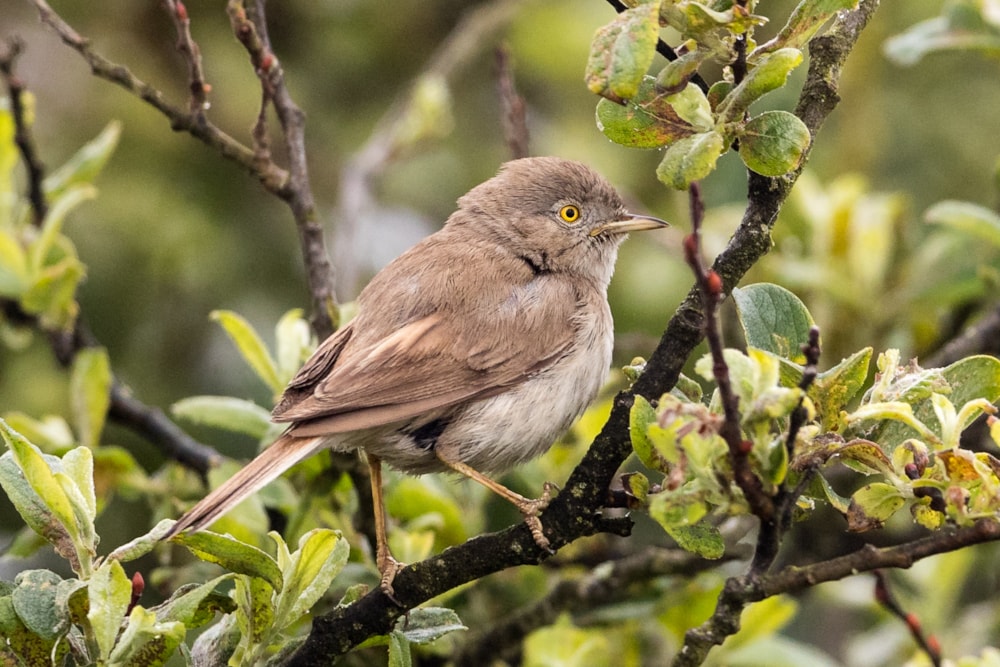 "Rather fortuitously, just as I was leaving the fells, my friend Richard Drew rang me to say he had had a subalpine warbler species on The Snook, Holy Island. A great bird and, with the chance it could be Moltoni's Warbler, I headed there. Thankfully, a forgiving 3.9-m tide allowed me just enough of a buffer to get onto the island ahead of the incoming sea.

"A couple of phone calls later and I had soon joined Richard and our friend Neil Osborne. Unfortunately, the bird had evaporated so, together, we hatched a cunning plan to systematically cover The Snook, radiating out from the bush that Richard had briefly seen the bird sing from. Richard's impression of the warbler was that it had rufous tertials and this had set my mind wondering about the possibility of Spectacled Warbler – a playback later of some song of this species sparked a flame of recollection with Richard.

"Surely, however, a bird of such enormity was really just daft and overly wishful thinking.  After more than four hours and not a sniff of the bird, we split up to cover other parts of the island. Later that evening, still troubled by the mystery bird and certain that the misty conditions would not have encouraged anything to leave, I decided to return to The Snook. My thinking was that, if the bird had sung early doors then maybe, just maybe, it could sing again in the evening …

"After an hour or so, at just before 8 pm in poor light and rolling fog, I picked up the twitching of a branch of one of the willows in the centre of The Snook. I quickly got my bins on the movement to be greeted by a small drab Sylvia warbler with a pale iris. My heart missed a beat as my brain shouted DESERT WARBLER! Crikey, a monster rarity.

"I quickly rattled off a burst of photos and checked that I wasn’t hallucinating, and it really was an Asian Desert Warbler. Sure enough, the camera backed me up and it was the expected Asian nana species. Wow. Time for a deep breath. The bird then gave several rattling calls which I tried to capture on my phone and, while I was checking to see if I'd actually recorded the vocalisations, the bird began to sing. I quickly fumbled around with my phone and managed to record it. The full suite of evidence (if Carlsberg did rarities!). I could now put the news out with absolute confidence. 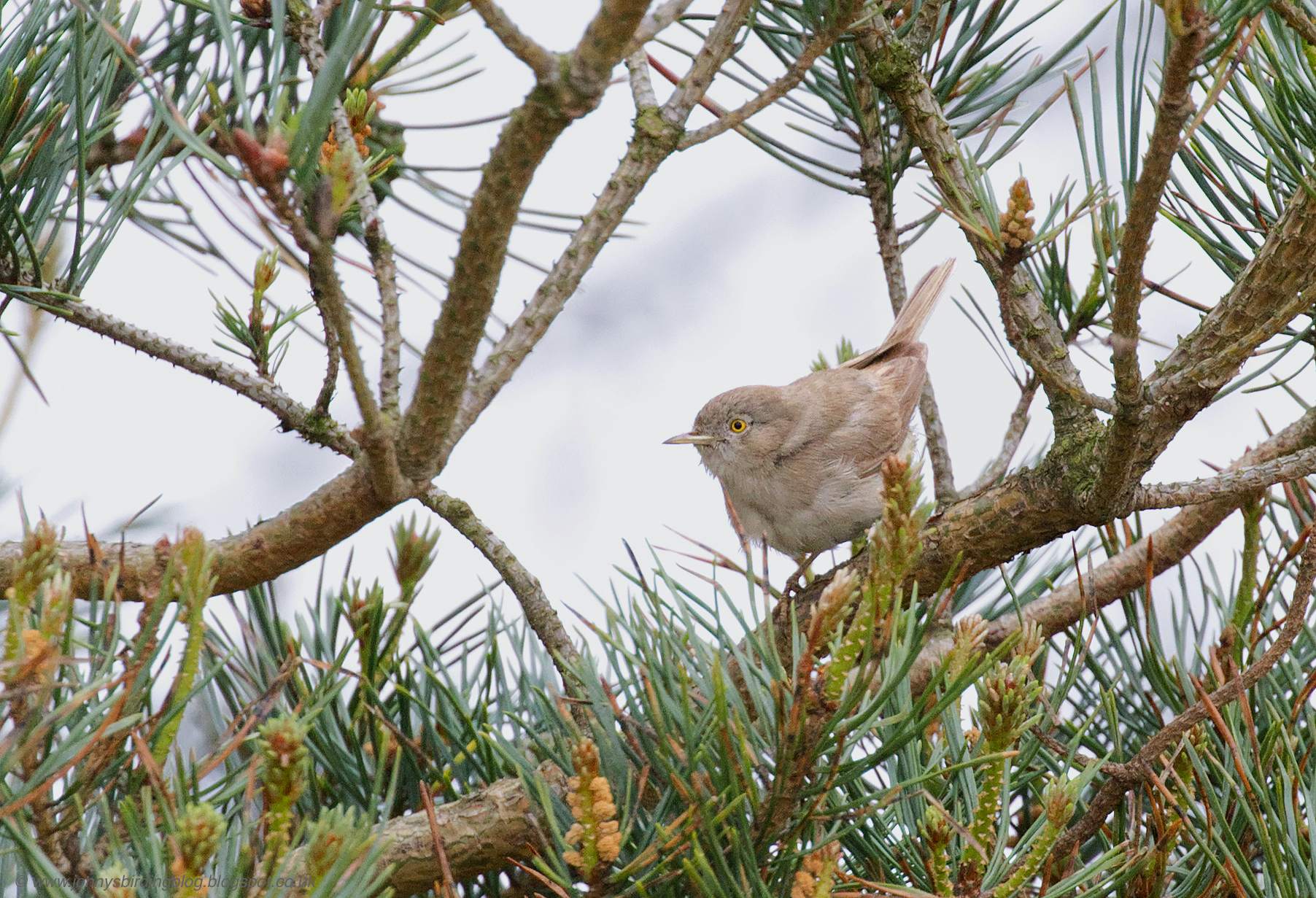 "I rang Richard to break the news to him first then called Neil, who didn't answer because he was in the bath. I then put the news out via the usual channels and the 'mega alert' soon got Neil out of the tub.  As the enormity of it started to sink in, I tried to calm down and enjoy the bird, but it had decided to go mobile. A frantic 10 minutes ensued before it thankfully settled in a small hawthorn – phew. I then babysat the bird until all who could make it before dusk were able to connect.

"A stunning bird on my local patch and a first for Northumberland – absolute magic and a team effort that paid big dividends. The initial image of those cadmium irises will forever be burnt on my retinas.

"If you enjoyed seeing this bird, you may wish to make a donation to MIND in memory of the late and great Tim Cleeves who would have just loved seeing that bird on Holy Island." 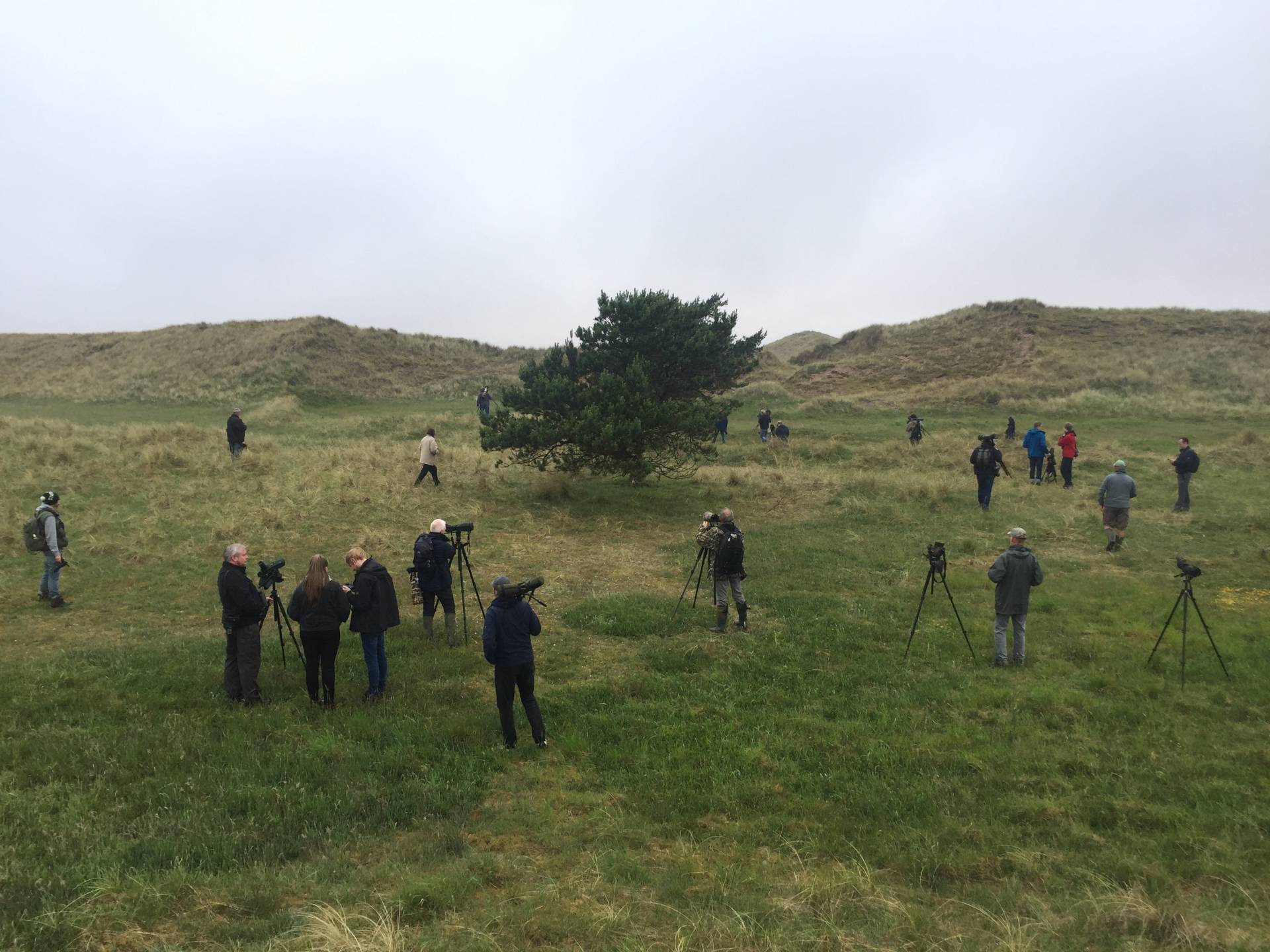 The bird remained until 19 June, staying faithful to an area of The Snook and often giving fantastic views to the modest crowds that it attracted. It appeared to have a territory, and afforded many visitors a fine opportunity to hear the distinctive descending song of this species. However, there was no sign of it on 20th.

Asian Desert Warbler breeds in short-growing and scantly vegetated deserts of central and western Asia and the extreme eastern extremities of Europe, from the Volga Delta east to western Inner Mongolia, China. It winters in similar habitats in the far north-east of Africa and south-western Asia (Israel is comfortably the easiest place to connect with the species in the Western Palearctic).

The Holy Island bird represented the first twitchable example of its kind in Britain for two decades. It is still an extremely rare bird here with just a dozen records, half of which came in an extraordinary five-year spell in the late '80s and early '90s.

Aside from a single-observer record in Kent in November 2012, the last bird was as long ago as May 2000, when one spent five days at Spurn, East Yorkshire. This bird, along with the Holy Island individual, is one of just three spring records in Britain, the first being a famous singing and nest-building male at Blakeney Point, Norfolk, from 27 May until 1 June 1993. 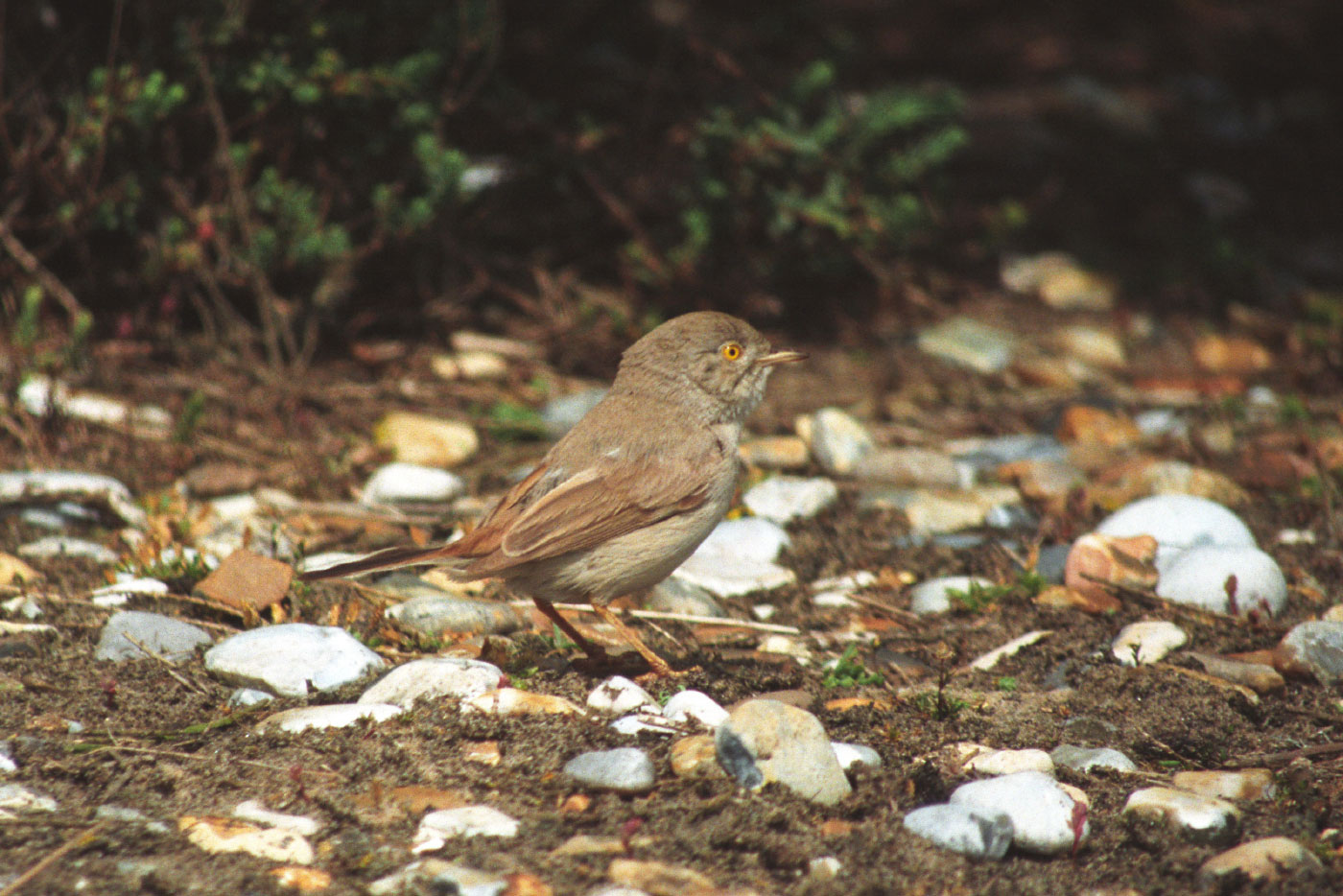 Since the last British bird on 18 November 2012 there have been six records in western Europe – including firsts for France, Italy and Spain – and seven from Scandinavia, the most recent of which was on Gotland, Sweden, on 7 November 2019.

Vagrants of this species – and in particular autumn birds – are well-known for often being very confiding, showing little or no fear of man. This, combined with their characterful nature and striking looks, makes them a perennial favourite among birders and thus a species that will always be popular when it turns up in western Europe. 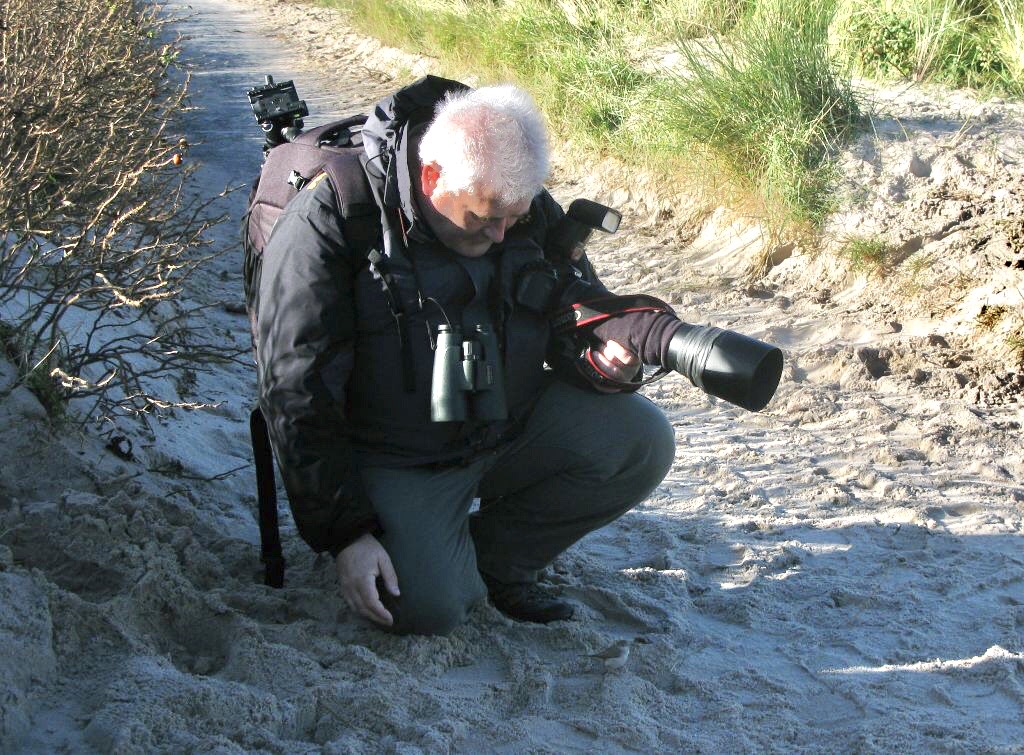