I have spent a lifetime of what one might call low-profile birding: mostly inland local patch birding, a few foreign trips to Europe as a young man, some grabbed opportunities on the occasional overseas business trip, and so on. In recent years, though, while I never actually stop being a birder (when cycling to work, gardening, driving, and so on), actually ‘going birding’ has become something of a now-and-again activity.

One of the regular ‘now-and-agains’ has been a trip from Leicestershire, where I live, to West Cork. My wife is Irish, and her parents moved out to Goleen on the Mizen more than 20 years ago. Short visits at various times of the year have delivered some memorable birds, including exciting self-finds such as Black Kite and Wilson’s Phalarope. But none perhaps so memorable or exciting as the one it delivered on Monday 21 August 2017.

I was with my son Eugene, who is also a birder, having come to it in adulthood after catching the bug while being dragged about by his binocular-toting father as a child. He’s as keen as I am now, and a great help to me with his sharper ear and eye.

There we were on an utterly dismal morning shortly after 8 am checking the gardens on the main road to Mizen Head, as we have done many times before. The mist was rolling around, it was cool, damp and almost birdless. However, there is usually something about, even if it’s just local breeding birds, and with it being August and dreary weather we were expecting nothing more than that.

As we got out of the car to go up to the patch by the road known as Chas’s Willows, Eugene wondered whether to bother taking his camera. He almost left it behind, but I said, rather prophetically as it turned out, that this was the sort of morning where you returned having seen nothing more than a few garden birds or something really surprising. So he took the camera.

One bedraggled Linnet on a telegraph wire later, we spotted a Common Chiffchaff and joked that things were hotting up. Indeed they were. I next glanced through a gap in the hedgerow towards a low willow bush about 10 m away, and a yellow-looking bird flitted into view.

With binoculars on the bird, my thought process was: ‘Bright juvenile Willow Warbler. Not a ‘Pyllosc’. Icterine? Melodious? Where’s the eyestripe? Wrong shape, wrong everything. Something very unusual here … must be an American warbler. But which one?’ By this time I had alerted Eugene and he was snapping away furiously with his camera. 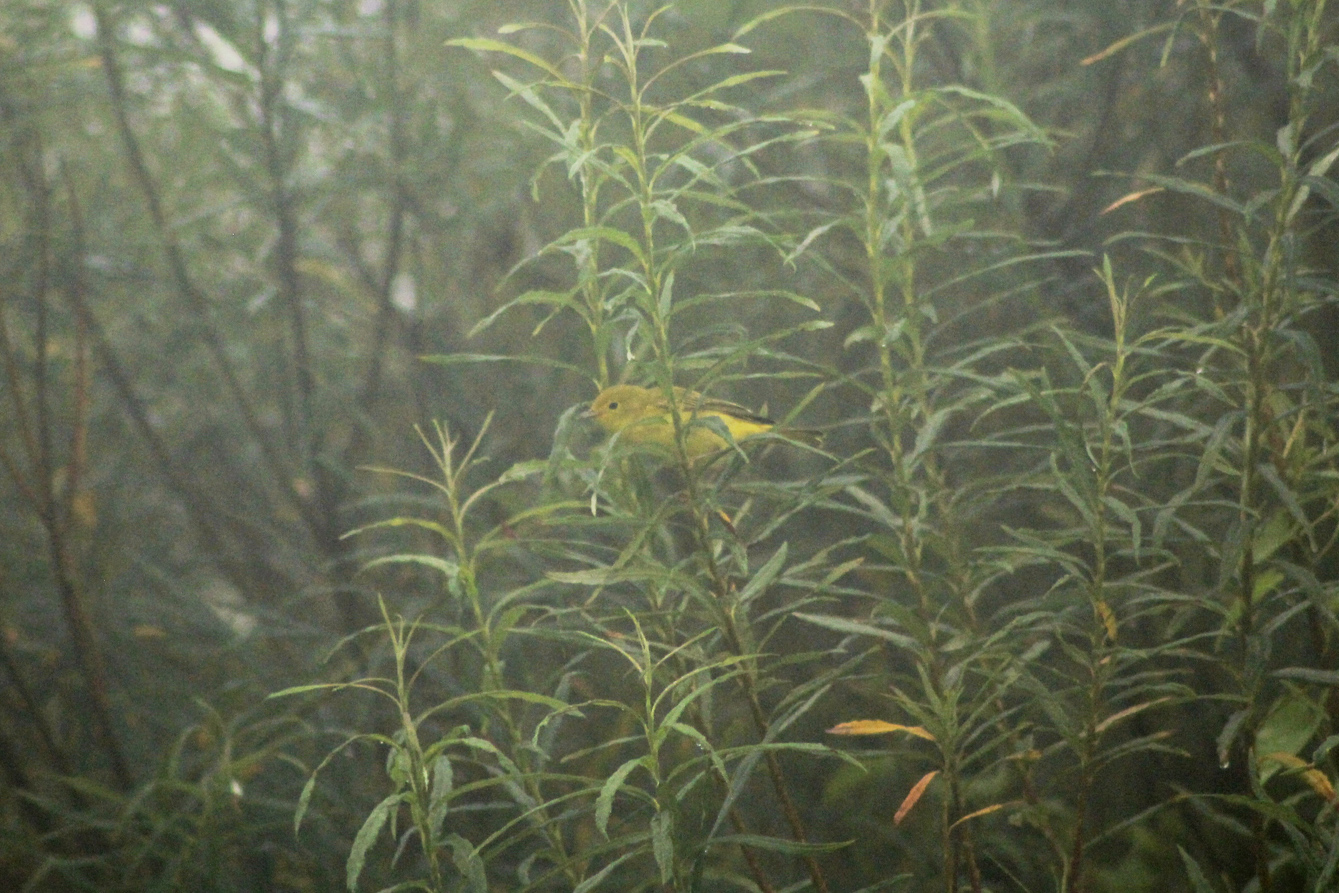 Curiously, given all the empty bushes we had been staring at that morning, there was a second bird in the same bush which also looked quite yellowish, but was clearly an Acrocephalus, one of the local Sedge Warblers I supposed, except that its back was very well marked and it had a distinct narrow median crown stripe. But I had to concentrate on the real oddity, rather than trying to turn a Sedge Warbler into an Aquatic.

A striking dark eye in a plain yellow face, yellow on the tail and underparts, including the tail coverts, pale legs, slightly more greeny-yellow above, pale-edged darker tertials, quite a stout bill. I had seen [American] Yellow Warbler in Florida in the 1980s, and my memory of this led me to tentatively identify our bird as Yellow Warbler. What I couldn’t be certain of was whether there was some other warbler that might be a possible confusion species. A quick run back to the car to consult Collins strengthened the provisional identification such that we felt able to put the message out on Twitter claiming Yellow Warbler. 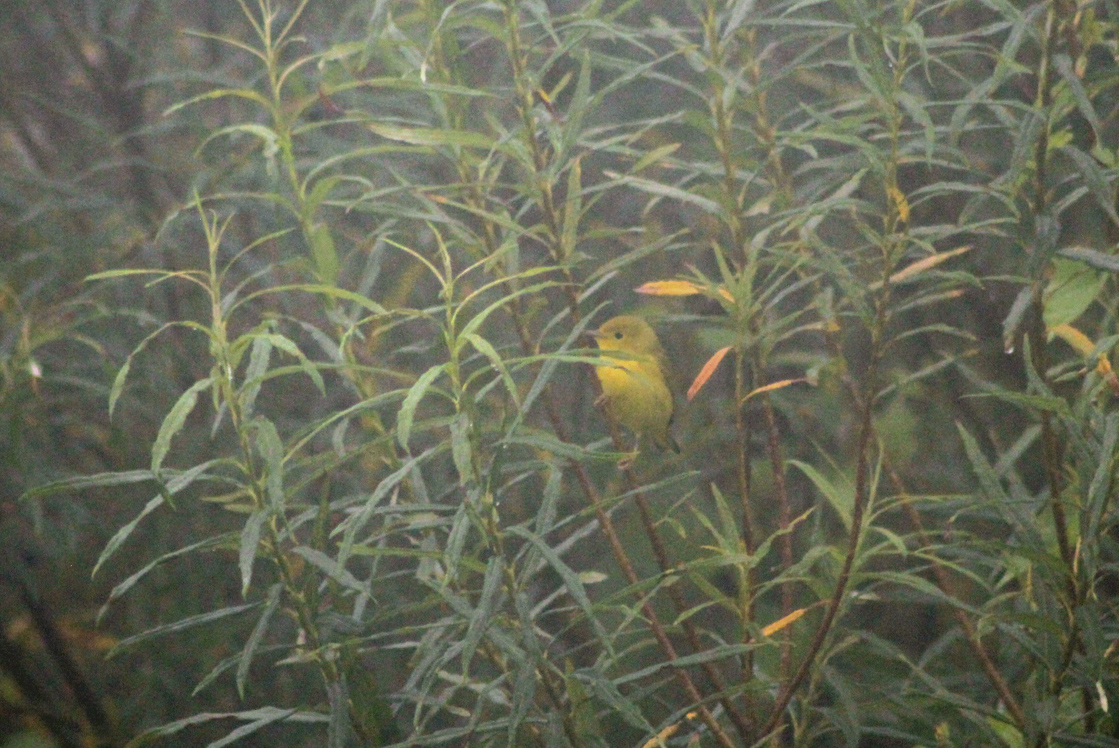 Very soon we were joined by local birder Dan Ballard, the finder of a previous Yellow Warbler on Mizen Head in 2008; he confirmed the identification from the record shots that Eugene had taken. Although the bird was now proving to be elusive after its initial showing, Dan soon found it again and we managed to get some clear recordings on a mobile phone of the bird’s surprisingly loud dzip call.

We had to leave to attend to family business at 10 am, but were able to return at about six in the evening, when we found a group of eight birders all satisfied with having seen the bird. Some others had been during the day, but it is interesting to note the difference between the small gathering at Mizen and the crowds that turned up at Portland to see the Yellow Warbler that showed up later that day. I know where I would rather have been.

And what of the suspect Acrocephalus? We spotted it briefly again after the Yellow Warbler stopped showing well. Not a good enough view to nail it either way, but good enough for suspicions to remain (Aquatic would have been a lifer for me, unlike Yellow Warbler). We thought it right to put it out as a possible Aquatic, so that birders arriving to see the Yellow Warbler would be alerted to keep an eye out.

Yellow Warbler – not a world lifer for me, but my first mega-find in 55-plus years of birding. It was sheer luck that the bird was showing well when I happened to look in its direction, but this was a memorable, exciting and very satisfying experience, the more so for being able to share it with my son – a lifer for him. It doesn’t get much better than this.