For well over a decade, I've regularly visited Holme Bird Observatory in northwest Norfolk. I've seen some fabulous birds there and also found a few bits and pieces, but never that mega I really craved. Spring 2011 was the closest I'd come, when my friend David Roche pulled out a stunning male Collared Flycatcher right from under my nose, a few minutes after I'd left him having been birding with him all day. Since starting University in Norwich my visits have become far less frequent, but in holiday time I always try and visit as much as I can.

The third week of April 2014 was really like any other, with one exception; my dissertation was due in on the Thursday! With that out of the way I took a peek at the pressure charts and weather conditions that evening, keen to get back out in the field. To my eye the Saturday looked the best bet, with rain on Friday and overnight and the easterly winds swinging round to the south-east and the low pressure system extending onto the continent. I figured such conditions would perhaps produce a spring Wryneck or similar. Up to this point the intermittent easterlies hadn't really produced at all and I had been lamenting to friends that really they'd been a couple of weeks earlier than I would have liked. How wrong I was.

I arrived at the Observatory with NOA warden and friend Sophie Barker on Saturday 26th April at about 6.45am. Against all the odds, the morning had dawned bright and sunny with clear blue skies and a light, if fresh, south-east wind. It was quickly clear that a fair few birds had arrived and been grounded by the overnight rain; Willow Warblers and Whitethroats were particularly obvious. There was a quite a lot of stuff moving overhead too. A male Ring Ouzel flew west, while Tree Pipits and Yellow Wagtails called as they passed through. After we left the car I was carrying a lot of stuff to the Observatory, including Sophie's rucksack, my 'scope and some bottles of water, while Sophie went through the site opening the nets. As I approached and rounded the corner, a bird flew up from the benches just outside the Observatory and flew into the top of the nearest pine. I dropped everything I was carrying but not quickly enough. I'd seen the bird with the naked eye only, in flight, for a split second, but it felt different. I walked underneath the pine and scoured it from every angle, including from the conveniently placed Observatory viewing platform, but found nothing. At this point Sophie arrived back from opening the nets on the western half of the reserve and I told her of my sighting and bemoaned the fact that I hadn't noticed the bird before I reached the benches. She continued along the east bank to carry on opening nets.

Quite a while had passed since my initial sighting but it was still niggling at me and I carried on searching without success. Getting seriously frustrated, I walked back down the viewing ramp. Halfway down, just before the corner that turns towards the Observatory and without warning, a bird dropped down from the closest pine onto the handrail. It was just a few metres away, if not less. Unbelievably, it was an Alpine Accentor! Not only were the bold rufous-brown streaks on the flanks instantly obvious, so was the yellow base to the bill, the grey 'hooded' appearance and the dark panel across the wing. 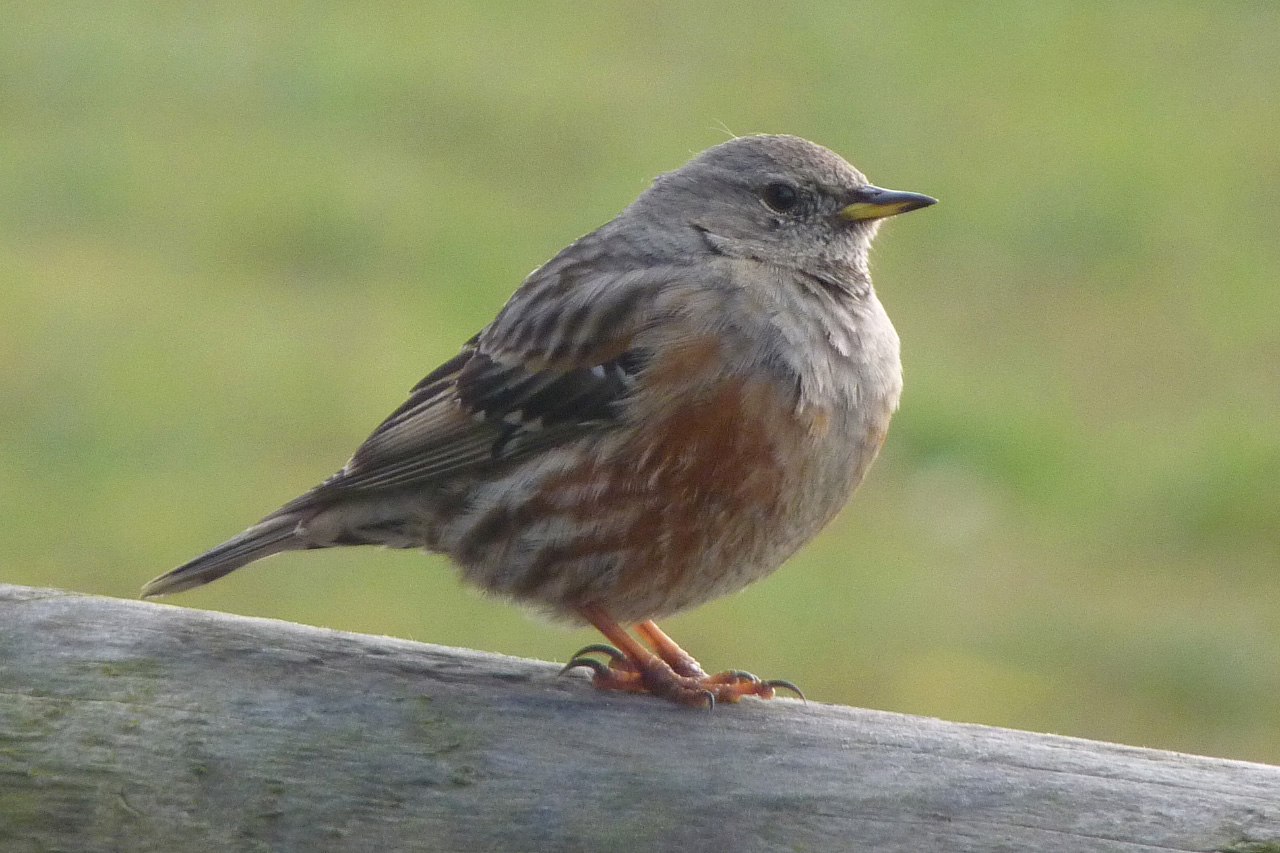 I quickly glanced around, with no sign of Sophie or anyone else. I was beginning to hyperventilate but knew the importance of getting some shots so I reached for my camera which thankfully was in a pouch on my belt. As I sat there snapping away the bird seemed unconcerned and confiding. It was completely still, except for a quick shuffle along the handrail. As the significance of this moment began to set in my hands were shaking more and more and my breathing was getting rather more erratic. I stopped taking shots and began to back away from the bird slowly pointing at it, hoping Sophie would come back along the east bank and see me pointing. Suddenly, the Alpine Accentor flew up into the same pine it had flown up into when I had flushed it the first time round from in front of the Observatory. 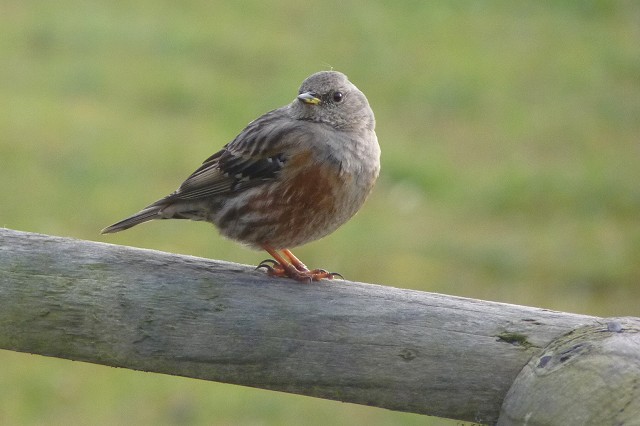 As I always knew would be the case were I to find a mega at Holme, all self-control quickly went out the window. I ran the short distance, screaming and crying with hands in the air, along the east bank to find Sophie. We instantly went back to the Observatory to search, but frustratingly there was no sign of the Accentor. Yet again, it just seemed to have vanished into thin air. I wasn't overly worried, though, as I couldn't see it spending much time in the pines and having seen it twice around the Observatory compound I assumed it would be present erratically in this area all day, perhaps finding the short turf along the east bank to its liking. Thankfully, looking at the camera the photos seemed reasonable and showed all the key features I'd noticed in the field, including the flecking around the throat and the eye and pale tips to the wing coverts. Speaking to Sophie we were both keen to get the news out as quickly as possible. We knew that, with it being a weekend in Norfolk, the bird would attract a lot of people. Sophie closed all the nets and I released the moths from the trap in the area the bird had been in. I then phoned out the news.

As expected, lots of locals turned up very quickly, followed throughout the day by people from locations further afield. As the hours ticked by optimism faded, even with the sun coming out and the number of people around the Observatory decreasing. As hope of the bird reappearing around the Observatory deteriorated, the surrounding areas were all well checked, including to Thornham Harbour and even Hunstanton. Remarkably, and rather surreally, there was no further sign of the bird by dusk. This seemed, if anything, more amazing than having discovered the bird in the first place! I had to keep on checking my photos to make sure I hadn't dreamed the episode! What happened to it? Was it a fresh arrival that quickly moved on? Did a Sparrowhawk grab it? I guess we'll never know. 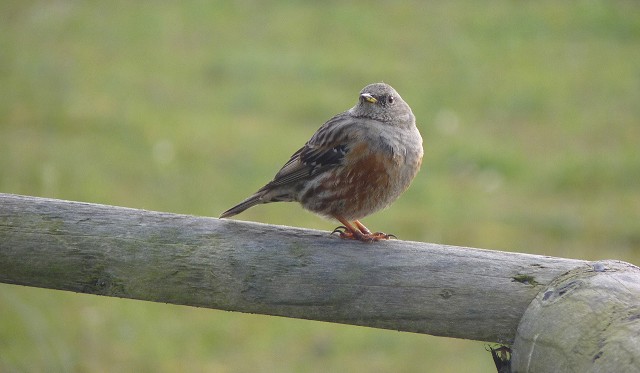 No excuses for another image! (Photo: Connor Rand).

I hadn't imagined that it would never be seen again, and I'm still amazed it wasn't. I would dearly have loved to have shared this bird with everyone. My thoughts are especially with Sophie and my dad Billy, as well as the fantastic group of hard-working locals Holme is privileged to have who didn't get to see it, especially Ray Roche, Chris Mills and Penny Clarke, who've always been so friendly and helpful to me. Thanks to everyone for the congratulations. Let's just hope the next one sticks...

Unsurprisingly, the Alpine Accentor was the first Holme record. It was the 34th British record, the first for a decade, and represented the third record for Norfolk: