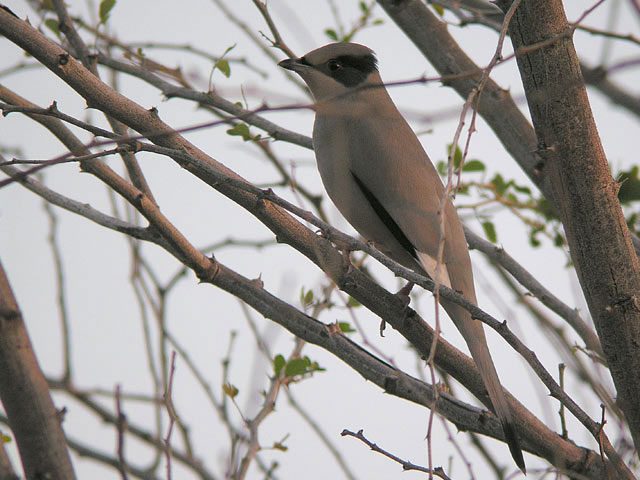 Grey Hypocolius: Ghantoot near Dubai, UAE This enigmatic species is the sole member of the genus Hypocolius, closely resembling the Bombycillinae (waxwings) in many aspects, but the taxonomy is controversial. Relationships are still uncertain, various recent authors suggesting that it might be closely related to bulbuls (Pycnonotidae), although affinities remain uncertain. Males have a distinctive black face mask extending to nape and white-tipped blackish primaries; a most distinctive species (photo: Ian Boustead).

This attractive inhabitant of semi-desert areas has a Western Palearctic breeding range restricted to eastern Iraq. Beyond the Western Palearctic, breeding occurs in southern Iran, southern Turkmenistan and western Afghanistan. It winters largely in southern Iran, Pakistan, Saudi Arabia, and the western Gulf States, primarily Bahrain (click here for sites) and United Arab Emirates (where it is an uncommon to fairly common migrant and localised winter visitor - Ghantoot Plantation is a traditional roosting site for this gregarious species). There is a also a small wintering population in Oman, click here for information on the sites of Muntasar and Qatbit).

Away from Iraq it occurs only as a vagrant in the Western Palearctic, where there are a small number of records in Israel, plus one in Turkey and two in Egypt; in Kuwait it is a scarce passage migrant. It has also occurred in Sudan. For most birders Bahrain, the United Arab Emirates and Oman offers the best opportunity in the world to see this highly prized species. 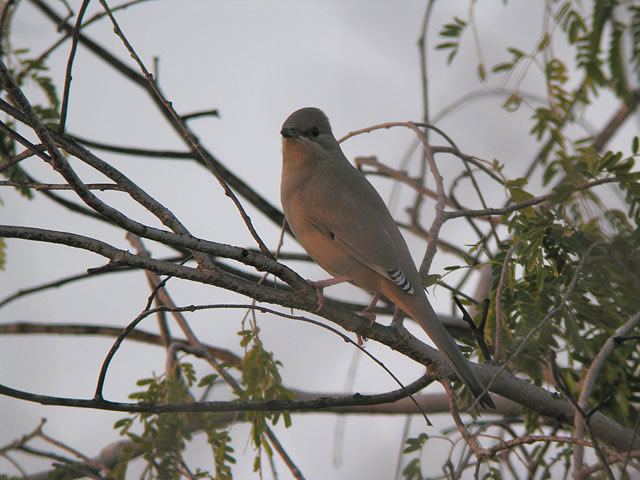 Grey Hypocolius: Ghantoot near Dubai, UAE A gregarious species, they are usually unobtrusive, keeping to thick cover. The best opportunity to encounter them is by visiting one of the roosting sites in Bahrain or UAE. Their persistent calling is often the first clue to their presence. Females lack the face mask and have greyish primaries with black and white tips (photo: Ian Boustead).