Until very recently, Brown Fish Owl was a near-mythical species within the boundaries of the Western Palearctic. Before 2000 there were only a handful of known records from the region, including just one 20th-century sighting from Turkey (van den Berg et al., 2009). The species was formerly resident in Israel, although the last documented record was in 1975. Further old records come from Jordan, Syria and Iraq, although details are scant. It was therefore hugely exciting when, in 2004, two birds were observed at a remote and unspecified location in the west of the Taurus Mountains, to the north of Antalya in southern Turkey. However, it was not until June 2009 that the species was finally found at an accessible site, by members of The Sound Approach on a speculative trip to explore likely-looking sites. Over the following 18 months or so, several sites with Fish Owls were found, although a combination of the birds' nocturnal habits and choice of remote locations ensured that, for the vast majority, observing the species was still nigh on impossible.

In June 2011, this remarkable tale took a new twist. A Danish family holidaying in the Antalya region of Turkey took one of the tourist boat trips around the reservoir at Oymapinar Baraji that, as part of their daily routes, explore the rather impressive canyons at the northern and eastern ends of the lake. Here, the captain pointed out caves that were purported to contain owls described as 'very rare' and 'only inhabiting areas similar to [the canyons]'. Fortunately, one of the caves did indeed contain an owl, and some rather grainy shots eventually made their way back to Danish birders, who correctly identified the bird. Given that the birds had been present here for some time and had been easily observed by literally thousands of unwitting tourists on the boat trips, there seemed no real reason to suppress the news, so the information was disseminated in mid-July in order to give Western Palearctic birders a unique opportunity to see the species. 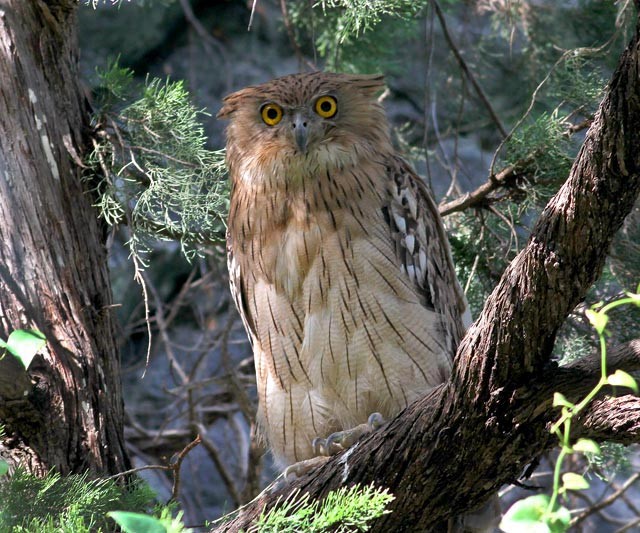 Over the next four weeks, several parties of keen birders from northern and western Europe visited the reservoir with varying degrees of success. Although birds were occasionally not apparent, most trips connected — particularly if a more extended stay within the canyons could be arranged. From talking to boatmen, it transpired that two pairs were present around the reservoir: one in the 'Little Canyon' and one in the 'Big Canyon' on the north side. In 2011, the Little Canyon pair successfully fledged two young and were solely responsible for all sightings (of up to four birds) during July and August of that year, while the Big Canyon pair had failed and had already dispersed by July. 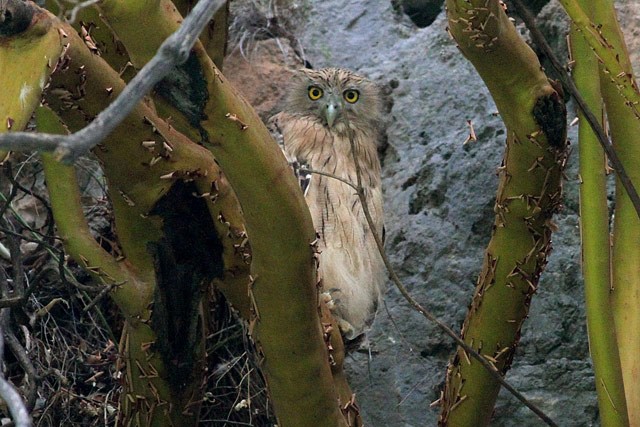 Predictably, given the decline of the tourist season into autumn and winter, no further information was forthcoming on the owls over the winter months. However, Belgian birder Rik de Jaegher confirmed the continued presence of birds around the reservoir in 2012, being fortunate enough to view an adult at close range in the Big Canyon from a tourist boat on 7th April. He reported that, although there were plenty of faecal stains around last year's nest site in the Little Canyon, there was no sign of any birds here on 7th (nor the previous day). However, Han Buckx found an adult at the usual nest site in the Little Canyon on 13th, and at least one was seen by a visiting Dutch group on 21st. Water levels at the reservoir are currently lower than they were in late 2011 and, although the nest site is still accessible by boat, the area further up the Little Canyon (where boatmen have also seen owls in the past) is currently impossible to reach. 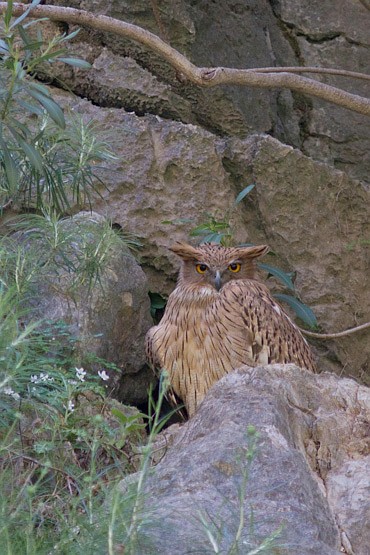 Collating sightings over the past year strongly suggests that the Little Canyon pair is much easier to see than those in the Big Canyon, which are only occasionally observed. Although it is too early to say for sure, sightings during summer 2011 would also suggest that the birds are easiest to see if and when young have fledged — several visits in July and August found both adults and juveniles sitting out in the open in trees immediately adjacent to the Little Canyon nest site. Otherwise, locating roosting adults seems a game of chance and, once the juveniles disperse, the adults appear to become more difficult to find. Nevertheless, the rate of success so far this April suggests that adults may be found within the vicinity of the nest site with some regularity, at least throughout the breeding season. Erdal, one of the boatmen operating tours around Oymapinar Baraji, has seen owls at this site since he set up in 2003, recalling gripping tales of hearing the birds at night and also observing them fishing at the water's edge. The success already seen this April further indicates that 2011 was not a one-off opportunity.

The taxonomic status of Brown Fish Owls in Turkey was discussed at length by van den Berg et al. (2009). The race, semenowi, was found to differ from those found across the Indian subcontinent in terms of plumage, song and favoured food (crabs as opposed to fish), while an apparent genetic divergence of 2% suggested that the Turkish Fish Owls may be regarded as a distinct species, further highlighting the importance of protecting and preserving their status within the country. 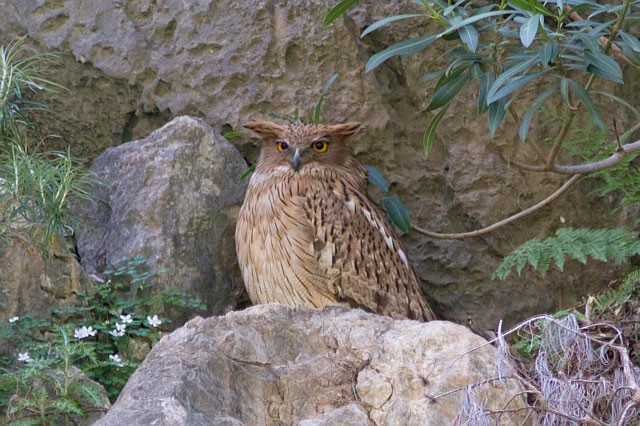 Given its close proximity to popular south-coast tourist destinations such as Side and Antalya, a visit to Oymapinar Baraji is relatively straightforward, even as part of a family holiday. The site, just 20 kilometres northeast of Side, is easily reached by taking the signed route north from Manavgat. If you have not hired a car but are booked on a tourist boat trip in advance, brief research would suggest that a pickup from your hotel is possible. A map of the general area can be found by clicking here.

The owls are viewable only from organized boat trips. Attempting to reach either canyon on foot would be both dangerous and reckless due to the steepness of the canyon sides and the difficult surrounding terrain. In addition, visiting the site on foot could easily disturb the birds, and thus be detrimental to their continued presence at the reservoir.

Boat trips can be taken in one of two ways: the cheaper option is to join one of the 'public' boats, which spend several hours touring the lake and may spend a limited amount of time in the owl hotspots. Beware that the trip requires the sacrifice of a full day and, as visits to the owl spots are comparatively brief, sightings are by no means guaranteed. Furthermore, you may have to put up with regular bursts of rather offensive 90s pop music, which may not be to every birder's taste. These trips cost around €35 and include a fantastic lunch. If you are more serious about trying to see the owls, the second option is to charter one of the tourist boats privately for the day. This essentially makes the boat your own, although be prepared for a massively augmented price: the best method would be to organize a team of keen birders in advance to ensure that costs can be spread. One of the boatmen, Erdal, can be contacted via email. Most of the boat trips leave from the small dock on the southeast shore of the reservoir at 36°54'18.13"N, 31°33'41.53"E. 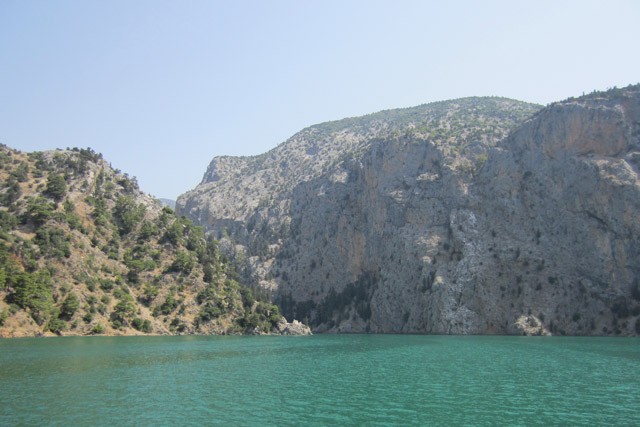 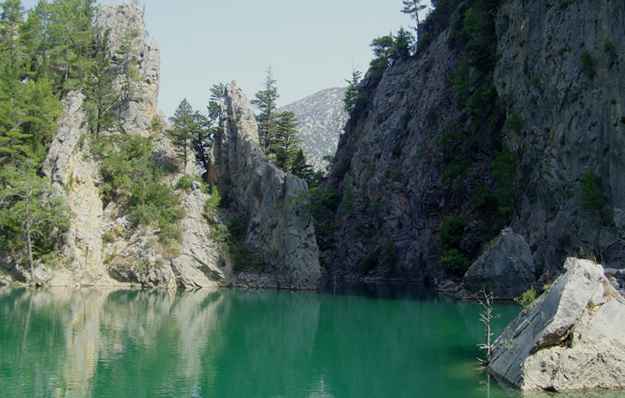 Ironically, we found the lake to be otherwise rather quiet for birdlife. Apart from a few Yellow-legged Gulls and Cormorants around the lake and Crag Martins nesting in the tunnel by the dam, we saw precious little, although our trip was in late July and during the heat of the day. However, Rik de Jaegher found an easy site for Krüper's Nuthatch in woods by the dirt track to the 'Adventure Park' off the main road to the reservoir, some 6km south of where it crosses the river, at 36°51'33.21''N, 31°30'47.44''E. Presumably the species is easy in the pine woods found across the area.

Many thanks to Richard Bonser and Rik De Jaegher for allowing the use of their excellent images within the article, and to Han Buckx who provided an update on sightings to 24th April.

Browsing through BWPi is an excellent way to acquaint yourself with the wide number of species that can be seen within the Western Palearctic region.