My seawatching weekend started with camping near St Just, as usual, to maximise observation time. I planned to be down the slope at Pendeen on the Sunday. I phoned John Swann for the latest gen: "Porthgwarra will be busy on Saturday and wind is better for Pendeen on Sunday."

On Sunday 18 August 2013 I arrived at Pendeen reasonably early, at about 6.30 am. I got set up just above the rock line and targeted some Northern Gannets with my camera to check image quality. Large flocks of Whimbrel were moving west, as were a few skuas, and a juvenile Mediterranean Gull appeared over the rocks.

At 8.35 am, I stood up and had a stretch as my legs had seized up. I walked up and down without taking my eyes off the sea, and about five minutes later an odd-looking 'tern', the first of the day, suddenly appeared in the centre of my field of view. I raised my binoculars, noting that it had an odd-looking black primary panel exposed on the downbeat and it was of a shape not familiar to me. Gull-billed Tern flashed through my mind as the bill end showed dark and strangely stubby. To get a photograph of this bird overrode all other thoughts. 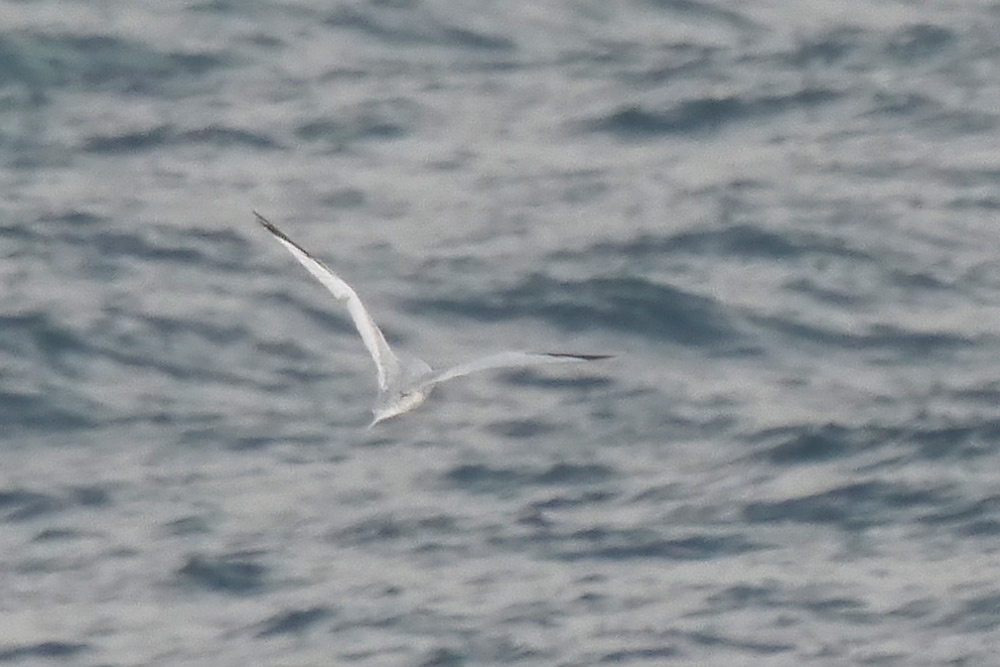 On the upperside of the wings, a distinctive black primary panel was apparent (Tom Whiley).

My Lumix G3 on the ground nearby was in standby and AP mode, and I was able to grab it and take two bursts of 20 shots apiece in total, several of which showed sea only (the overall shooting time was 22 seconds, measured afterwards from the image file data).

The focal length of 1,419 mm was the rough equivalent of 25x magnification on a scope, so the bird was about halfway out to Three Stone Oar (perhaps no more than 100 metres or so), on its left hand side, by the time it turned west on its last bank.

As the shots 'strobed' by in the electronic viewfinder, a red bill appeared and the bird's ID suddenly became apparent: Red-billed Tropicbird! 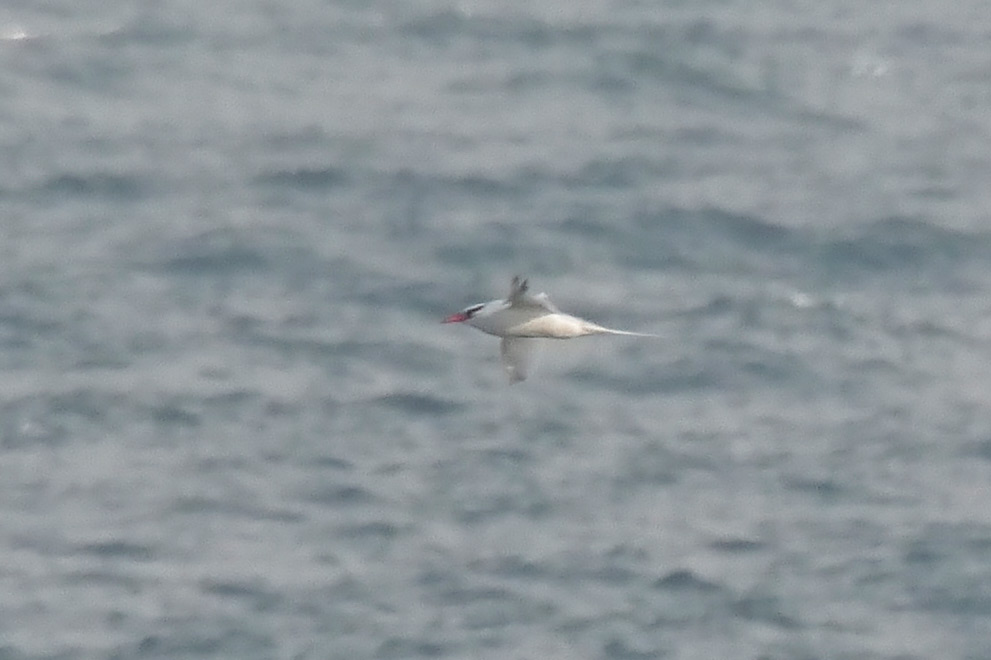 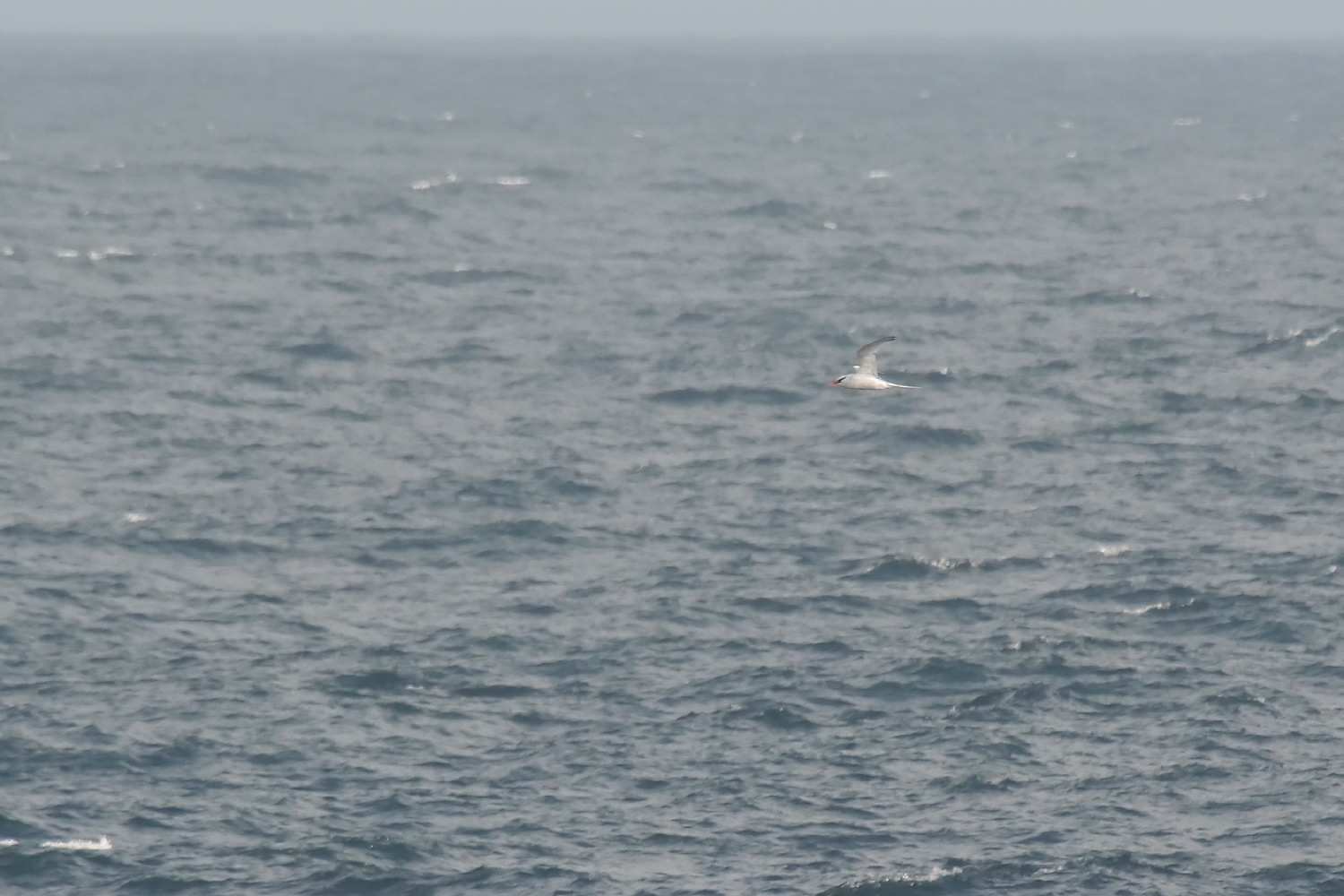 This image has barely been cropped in order to illustrate how it looked in the camera viewfinder (Tom Whiley).

The bird then dived down to the west and I lost it in my viewfinder. Switching to bins, I attempted to raise the alarm to two other bird photographers out on the rocks, but the noise of the surf blocked out my shouts and both had their heads down. I assumed they were reviewing images on the rear of their cameras, and that meant they had not seen the bird at all. That's not good, I thought.

I got up again, scanned west, but couldn't relocate bird. I then reviewed the shots in my viewfinder: hell, yes – it was a Red-billed Tropicbird for sure.  I grabbed my smartphone but there was no signal, as I suspected. I thought again: "This is not good."

After much scanning and pacing back and forth to review shots, the bird had still not returned, as I had hoped it might. I looked up the grass cliff slope expecting to see Mark Payne, who was present, and perhaps a few other birders leaping up and down it as if from a scene in Braveheart, but could see nothing of the sort.

I scanned again and grabbed some shots of a close-in Great Skua, then packed up and climbed the grass slope to locate John Swann, if he was there, perhaps to assist in a possibly heated ID debate, before attempting to relocate the bird further round the coast. Halfway up, I scanned the line of birders along the wall, but there was no John. They were all still calmly seawatching. You know what I thought. 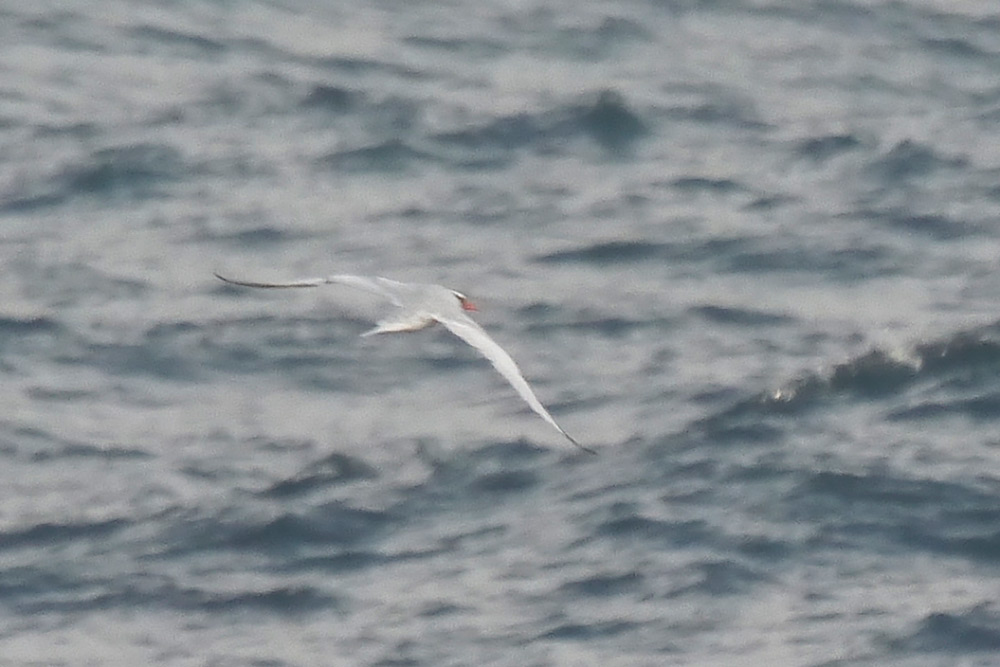 Another image of the Pendeen tropicbird, showing the distinctive red bill and eye 'mask' (Tom Whiley).

Plan B was to approach the nearest competent birder, ask if John was around, wave over Mark Payne and show them one of the shots, and then go without further delay and try and relocate the bird further along the west coast.

Having alerted other nearby seawatchers, I phoned John from the road, agreed to pick him up from his house and find the best scanning location on the west coast of Penwith. We scanned a large area of sea from Carn Gloose without success. Birders had been at Cape Cornwall all morning and had not reported the bird. We then retired to his house to examine the shots on a larger display, check the ID guides and have a much-needed brunch.

My first shots were of the bird zooming away from the coast before it turned west and soared up briefly. It had probably sneaked into view from the east close inshore. On the down beat of the wings the black primary panel showed well, but otherwise the bird was a brilliant white against the sea. Phaethon – its generic name – translates as the 'shining or radiant one'. In some shots black markings on the axillaries and tertials can be seen. At a distance and going away, the bill and face-mask merge into a dark, well-defined patch.

Later on back home, I found myself staring at a seabird plate by John Gale from Birds of the Middle East hanging on my study wall. In the top left corner is Phaethon aethereus, Red-billed Tropicbird. "When will the next one be", I wondered. 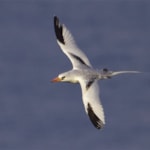