Studies of island bird populations have taught scientists a lot about evolution, but it has been difficult to catch birds in the act of naturally colonising new islands. Now, a new study has examined the genetics of a species that was introduced  to Hawaii by humans in the 20th century. The research aims to show the extent and speed of its adaptations.

Japanese Bush Warbler was introduced to Oahu in 1929 and has since become established on all the main islands of Hawaii, providing a unique opportunity to follow post-invasion evolution on a known, recent timescale.

Northern Arizona University’s Jeffrey Foster and his colleagues took blood and muscle samples from 147 bush warblers living on five islands between 2003 and 2005. Their results indicate genetic drift has happened and is still occurring. Oahu’s birds have higher genetic diversity than those on other islands, the populations of which were founded by smaller groups of individuals, just as population genetic theory predicts.

The bush warblers on Kauai, however, appear to be on a distinct genetic trajectory from those on other islands. Kauai is three times as far from Oahu as the nearest other islands, and appears to have received a unique subset of the overall genetic diversity found elsewhere.

It remains to be seen whether this trend on Kauai will continue in the future or if the ongoing dispersal of birds among the islands will blur these differences. “This study nicely showed genetic divergence for a very short period using the artificially introduced Japanese Bush Warblers,” commented Shoji Hamao of Japan’s National Museum of Nature and Science, an expert on the species. 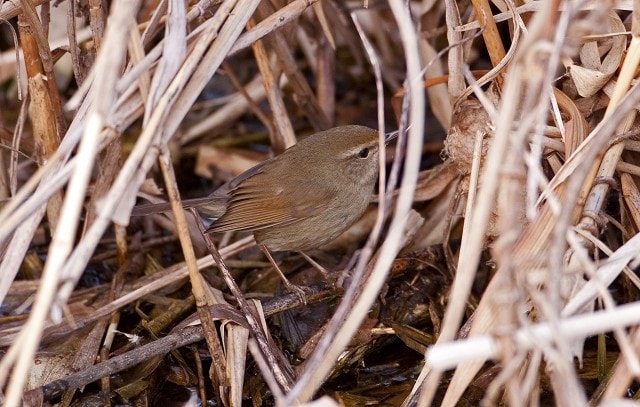 “I got the idea for bush warblers as a study system due to the challenges associated with my previous work on native Hawaiian birds,” said Foster. “Most of the native bird species I had worked on were exceedingly rare – several of them were endangered, in fact – so focusing a new project on species in decline or with low numbers was a risky proposition. However, many of the introduced birds are quite common, and one species – Japanese Bush Warbler – caught my attention with its loud song.

“Bush warblers first arrived on the Big Island when I was living there in the 1990s. The idea that one could study this invasion in progress totally blew my mind. The genetic findings largely followed expectations, such as seeing the most genetic diversity on the island where the birds were introduced and less elsewhere. Birds on Kauai, the island just west of Oahu, appear to be more distinct than those birds on islands east of Oahu, suggesting that over time birds on the respective islands may continue to diverge genetically.”

However, many questions remain to be answered. Foster added: “How much are the birds still flying between islands and potentially mixing genetic signals of differentiation? Why did it take 50 years for the bush warblers to colonise other islands after Oahu? How have their vocalisations changed after colonisation due to new environments or random chance? We still don’t know.”