Increasing wind-energy development on the Great Plains of North America has spurred concern about the potential effects on grassland birds, which are the most rapidly declining avian group in North America.

However, a new study published in The Condor suggests that for one grassland bird species of concern – Greater Prairie Chicken – wind-energy infrastructure has little to no effect on its breeding success. Instead, roads and livestock grazing remain the most significant threats to its reproduction.

Prairie-chickens are thought to avoid tall structures such as wind turbines because they provide a perch from which raptors can hunt. To learn more, the University of Nebraska–Lincoln’s Jocelyn Olney Harrison and her colleagues gathered data on the effects of an existing small wind-energy facility of 36 turbines in Nebraska. They captured 78 female prairie chickens at display sites or leks ranging from less than half a mile from the wind energy facility to more than 13 miles away, and fitted the birds with transmitters to track them to their nests.

Monitoring their nesting success and collecting data on the habitat characteristics of each nest site, the researchers found little evidence that the wind-energy facility affected breeding site selection or a nest’s chances of survival. Instead, vegetation characteristics, driven by land use practices such as grazing, had the greatest influence on prairie chicken nests. Birds also avoided nesting near roads. 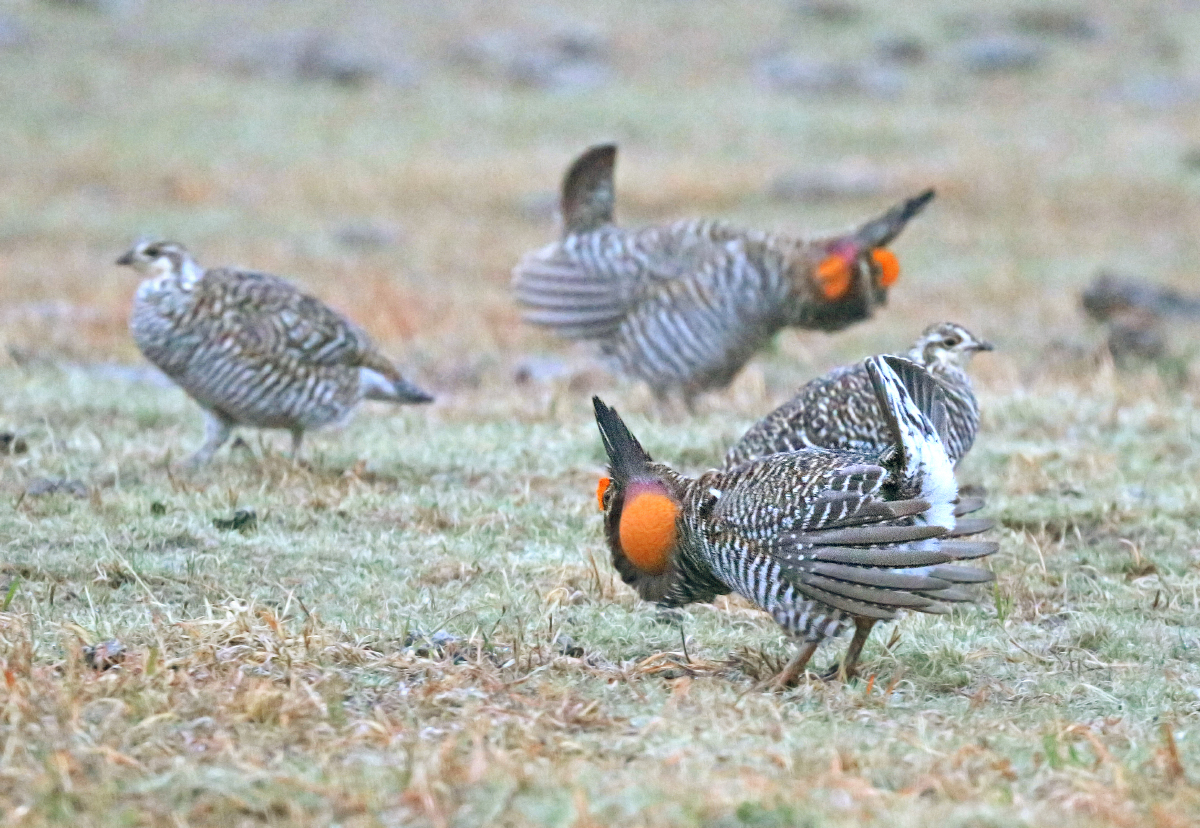 Like many other grouse species, in spring Greater Prairie Chicken holds leks where competing males display for the appraisal of groups of females before breeding. This early morning gathering was in Yuma County, Colorado, in April 2016. Photo: Alan Schmierer (commons.wikimedia.org).

“When comparing previous studies to our own, it appears that the effects of wind energy facilities on prairie grouse are often site- and species-specific,” said Harrison. “Therefore, it’s important to consider the results of our study in the context of the size and location of the wind-energy facility, as well as the grouse species investigated. We suggest that livestock grazing and other grassland management practices still have the most important regional effects on Greater Prairie Chickens, but we caution future planners to account for potential negative effects of roads on nest site placement.”

Private landowners were key to completing the study, she added. “Our radio- and satellite-tagged Greater Prairie Chickens made larger than expected movements while we were tracking them, which led us to require permission from new landowners on almost a weekly basis during our field seasons. Landowners throughout our field study area were always extremely welcoming and helpful, and genuinely interested in our work. Our project was a success due to more than 50 landowners who granted us access to their private lands.”