Postcards from the edge: invasion of the Cetaceans – part 2

Continued from Part I.

It was clear by this point that the presence of so many cetaceans just beyond our coastal terra firma was far from accidental, and that a certain synchronicity was at play. The catalyst was evidently the sheer volume of fish inundating our inshore waters; from the tightly packed masses shimmering in the shallows just beneath us to the dense, swirling shoals developing anywhere from twenty metres to many miles offshore, the bounty was attracting oceanic opportunists from much deeper and more distant waters, effectively dispensing with the rule book in the process.

Secondly, an unusually prolonged period of calm, clear and warm conditions had settled upon us, ideally suited to cetaceans exploiting the all-you-can-eat banquet on offer, and equally well suited to our wide-eyed, land-bound enjoyment of them. With a plate-glass ocean and bright, pin-sharp visibility day after day, locking on to surfacing animals was a relative breeze and almost constant pleasure.

Thirdly, coverage was much better than usual. Most of our regular seawatching is conducted from the purpose-built hide down on the Brigg, but for watching cetaceans, the cliff-top is far more productive, the extra height providing a deep and expansive aspect and a stunning panorama from Flamborough Head to Robin Hood's Bay. Happily, we were able to justify monitoring from our favoured spot for much of each day while conditions remained optimal, and as word spread, so did the area around us occupied by visiting observers. 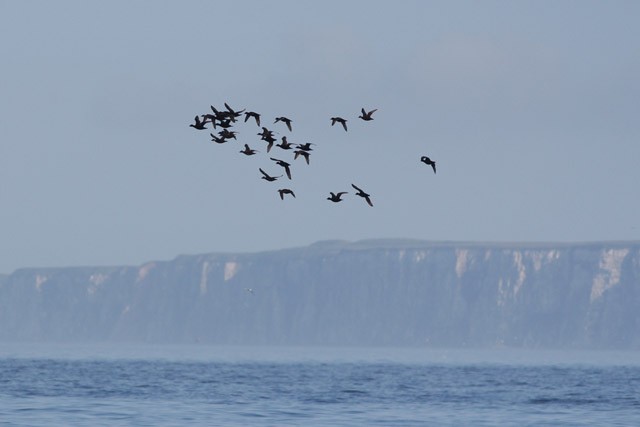 Come the 16th, and once again we were overlooking a North Sea as clear as the Caribbean (with the weather to suit). Before long, we had multiple Minkes performing at all distances — some miles from land, others fantastically close inshore, and still more at various points in-between; indeed, it's not every day you find yourself nonchalantly using such magnificent beasts as waymarkers ("flock of waders heading south, passing the close Minkes....now"), and such privileges were far from lost on us. 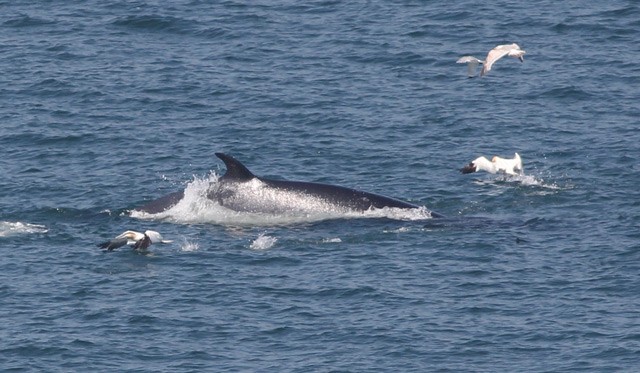 The frustratingly brief view of an apparently much larger animal the previous day, while seriously pulse-quickening, seemed likely to remain just that; similarly, several sightings of two dolphins around midday likewise evaded specific identification, but at least reminded us that, given the circumstances, theoretically there could be almost anything out there.

And so it came to pass, in unexpectedly dramatic fashion. Early afternoon, and a comparatively huge, sickle-shaped dorsal fin broke the water's surface, out of the blue and into our fields of view, provoking both formerly serene observers to begin squealing like overtired five-year olds after too much birthday cake. A few seconds later (and having regained the plot somewhat), we were much relieved to see the same distinctive dorsal still clearly in view, this time with more of its majestic owner on show above the surface, rolling powerfully forward in impossibly long, shallow revolutions.

Despite our excitement, we focused on nailing as many features as possible, and with the luxury of Minkes close by for comparison, we knew it could be one of only a very few possibilities; with various features duly checked and double-checked — including the size and shape of the dorsal and its position in relation to the exposed back, as well as the whale's relative overall size, shape and behaviour — we were able to enjoy excellent views over the course of an unforgettable half-hour or so.

Better still, we weren't alone — running towards us along the cliff path (after hearing our expletive-ridden alarm calls from some distance), visiting cetacean devotees Chris and Richard had also been enjoying the show; by the same process of elimination, they'd reached the almost unbelievable and yet unavoidable conclusion that the four of us were indeed watching a globally threatened Sei Whale, amongst numerous Minkes, from the comfort of our modest, crumbling vantage point on the North Yorkshire coast. Magical.

Mindful of the species' extreme rarity (and the corresponding unlikelihood of occurrence), plenty of subsequent research, discussion and comparison of notes only served to further cement our initial identification; we'd witnessed a potentially once-in-a-lifetime event, and as you might expect, we'd savoured every second of it. And while we were hopeful that it might reappear, it was nevertheless very satisfying to receive word of the very same animal showing beautifully alongside a boatload of whale-watchers just a couple of days later a little further up the coast.

But still there was more to come. The following day provided more Minkes, Harbour Porpoises now into double figures (and happily omnipresent throughout the period), and another sighting of two (unfortunately unidentifiable) dolphins. Of the latter, White-beaked were by far the most likely candidates, based on the features noted and the species' relative abundance further up the coast; indeed, several confirmed sightings off the Brigg during the period had already raised our cetacean species tally to four and counting.

By the following day (the 18th), we'd entered a tenth straight day of cetacean action, and by mid-morning, we were watching a minimum of nine Minkes simultaneously; again a record count, again a likely underestimate, and again an often breathtaking show for the assembled throng, by now an increasingly motley collection of holiday camp families, local fisherman, hardcore whale-watchers and plenty more besides. 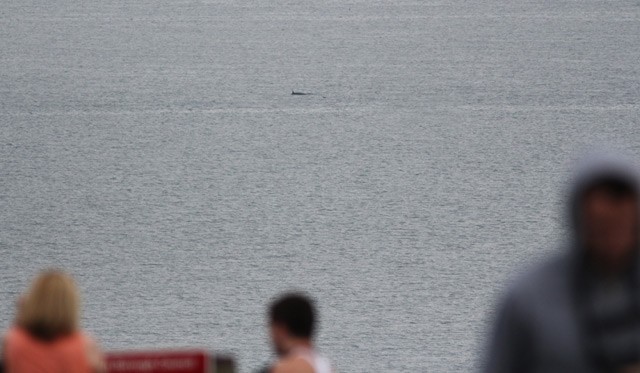 Seabird feeding frenzies had been increasing evident (and impressive) over the period, and were by now hitting their peak. Forming and dispersing as randomly as the movements of their prey, hundreds-strong flocks gathered in swirling, multi-species maelstroms, exploiting the bounty just below the surface and, crucially, signposting the next likely targets of feeding whales. 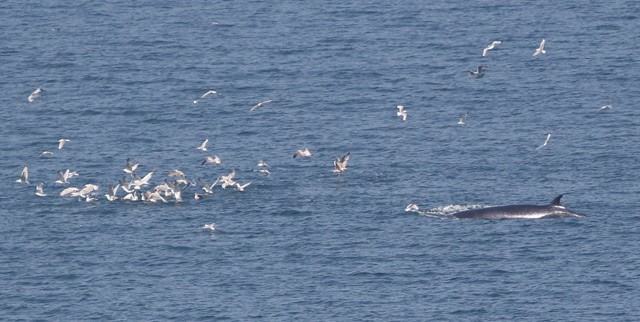 Gannets, gulls, Guillemots and more would suddenly panic and scatter as they narrowly evaded the open jaws of a lunging Minke, the more cavalier of which would stage smash-and-grab raids on feeding frenzies just a couple of hundred metres from the shore; exhilarating stuff in any circumstances, not least from dry land, and even more so when it's all happening ten minutes from the front door.

Just when it seemed it could hardly get any better, a school of five large dolphins with tall, sickle-shaped dorsals powered effortlessly southbound into the swell. The smart money was on White-beaked, which would've been more than fine; but while trying to help others get onto them, various diagnostic features became clearer, unequivocally giving them away as Atlantic White-sided Dolphins — another bona fide rarity and a wholly unexpected bonus.

It had to wind down at some point, and shortly afterwards, conditions began to deteriorate and the peak had seemingly passed; but not before a final showstopping performance from the Minkes on the 19th. Another full, entertaining day's monitoring began with multiple whales present on arrival, and by mid-morning, we counted at least ten in view simultaneously — our first sure-fire double-figure count, the cause of further impromptu cliff-top celebrations, and a satisfying book-end to an incredible period here on the Brigg. 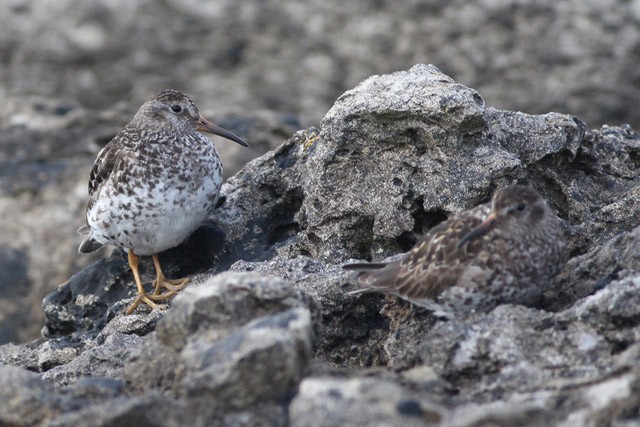 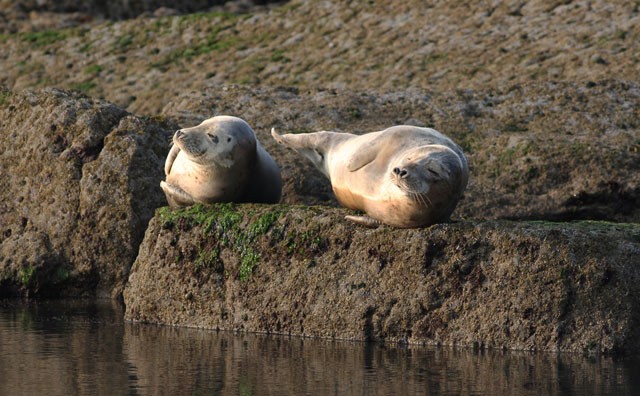 ... as did these Grey Seals, which occupied ringside seats on the Brigg throughout (Photo: Mark Pearson).

With a final haul including a Sei Whale, consistently record-breaking counts of Minke Whales, five Atlantic White-sided Dolphins, several White-beaked Dolphins and ubiquitous Harbour Porpoises (as well as possible Bottlenose and various other unidentified dolphin sightings), it's extraordinary to recall that ten days previously, a single distant Minke sighting was, at the time, seemingly unsurpassable. Whether it'll happen again or not, who knows, but either way, it was a hell of fine way to spend the deep midsummer here in Filey.