Postcards from the edge: autumn in Filey – part 2

With August having delivered mixed fortunes, September was an altogether tastier prospect which, in time, would make good on its promises — but not before certain tests of faith, of course. Echoing last autumn almost exactly, the first three weeks of the month were dominated by a satanic westerly airflow, and thus the regular checking of the land for signs of life often barely registered a pulse.

Thank the gods for choices, then, and in particular, for the sea. As alluded to in Part I, those choices are one of the main joys of setting up camp here in Filey, with bush-kicking, seawatching and wetland-checking all on the table. Many sessions in the field are a combination thereof, but some days demand more singular attentions: exactly the case on the 11th, when a strengthening north-westerly inspired a five o'clock alarm call and a hair-raising scramble down the slope of Carr Naze, overnight rain having turned the already precarious descent into a theme-park mudslide. 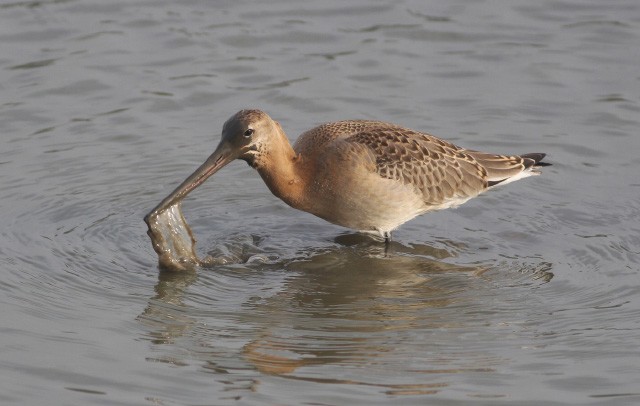 It's never easy to wax lyrical about memorable seawatches — by their nature, you really have to be there — but in four hours we'd clocked a pristine Sabine's Gull, two Long-tailed Skuas and a smoky Blue Fulmar, as well as big numbers of Manxies, Sooties, Arctic Skuas and Bonxies and a long list of passing ducks (including Velvet Scoters). Ascending the slope once the action had faded, an uncharacteristically early (but characteristically showy) Snow Bunting flitted onto the path, capping a fine morning's birding.

Here at Filey, the seawatching hide (reassuringly sturdy, after its wooden predecessor was last seen bobbing towards Denmark in roughly flat-pack form) nestles at the base of Carr Naze's rapidly eroding cliffs; thus, the visual perspective is inherently narrowed, and in heavy swell for example, tantalising glimpses of a fluttering petrel can remain just that. The upside, however, is that much of the action is condensed into a single field of view, 'compressing' the main band of activity over the waves. (White) horses for courses. 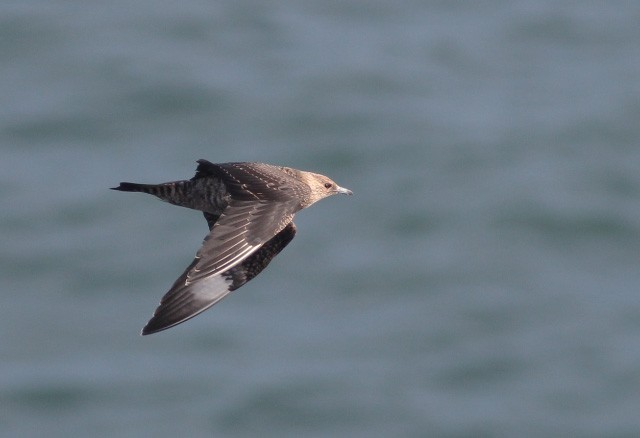 Understandably not everyone's cup of Yorkshire Gold, seawatching here as anywhere often requires patience verging on the Zen-like, a laissez-faire attitude to the (numerous) ones that got away, and a vaguely psychotic ability to remain blankly focused for hours on end. But the heady mix of serenity, adrenalin rushes and blind panic is uniquely rewarding, wonderfully addictive and highly recommended.

And if the sea is quiet, a few steps further and the Brigg beckons. Just so a couple of days later, where a small group of waders settled close by; fieldcraft soon went out of the window when a (locally less than annual) Little Stint trotted out of the pack and straight towards me, alternately feeding and snoozing within a couple of metres of my feet. A special experience, and pure Filey — Arctic shorebirds at point-blank range, against a spectacular backdrop on a sunny day. 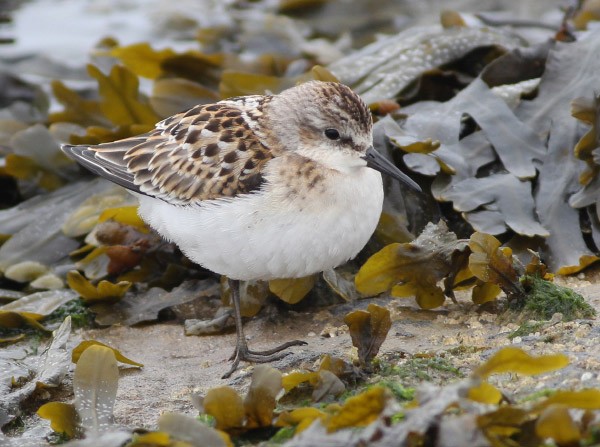 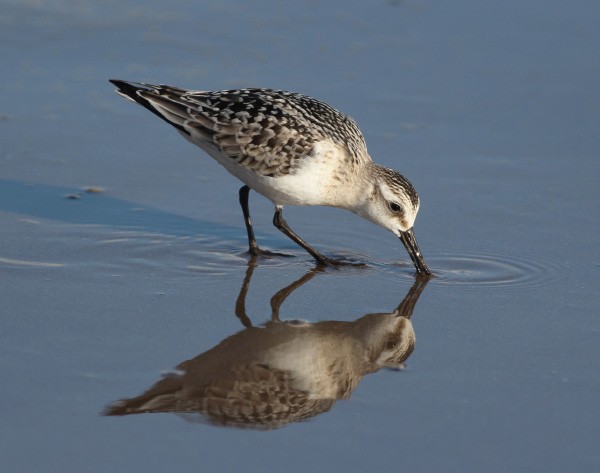 A couple of days later, and fortune favoured the Dams, which had continued to attract a decent range of common waders. Another first-light start paid off with the year's only Spotted Redshank and an early Jack Snipe dropping in for a few brief minutes post-dawn. Another couple of days later, the first skein of Pink-footed Geese — a hundred-strong harbinger of the approaching season — headed south, in deep, animated conversation against a clear blue sky. 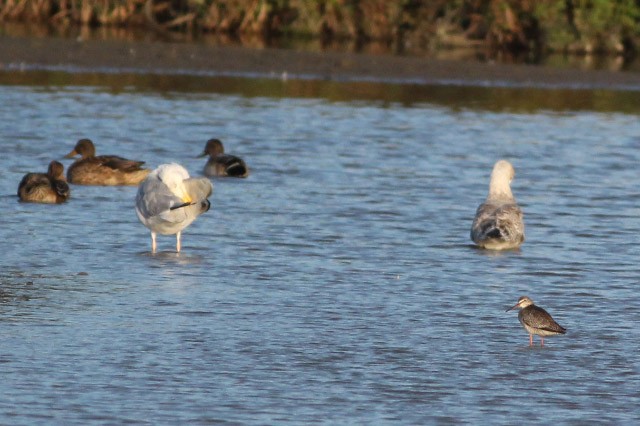 The year's only Spotted Redshank, present for a few minutes only at the Dams (Photo: Mark James Pearson) 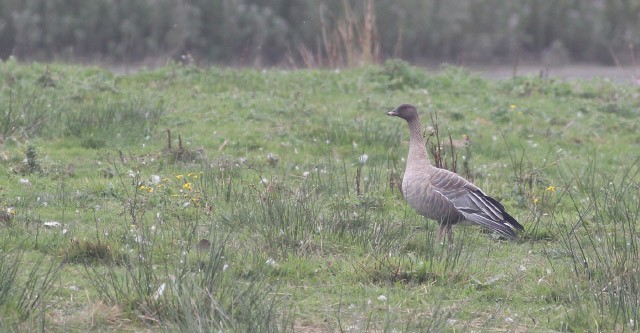 Pink-footed Geese are a feature of September, with some stopping off at the Dams (Photo: Mark James Pearson)

Plentiful reasons to be cheerful, then, and by the 21st, finally there were encouraging changes on the charts. In isolation, a light westerly and brightness are about as uninspiring as it gets, but news of Yellow-browed Warblers on the Northern Isles and scarce passerines registering as grey squares further up the coast on the BirdGuides BirdMap were reason enough to get in the ring.

But a sunny Saturday means shedloads of day-trippers, and so to plan B: the southbound cliff path with its undisturbed scrub, and more ripe blackberries than we could realistically hope to pilfer. Before long, I found my bramble-stained forefinger wagging enthusiastically in the direction of a motionless Wryneck, hidden in the hawthorns — suddenly, after weeks of scarce passerine deprivation, success. Conditions remained favourable over the coming days, and multiple patrols produced, among others, my first (and very welcome) Yellow-brow of the season, on Long Lane on the 23rd. It wouldn't be my last. 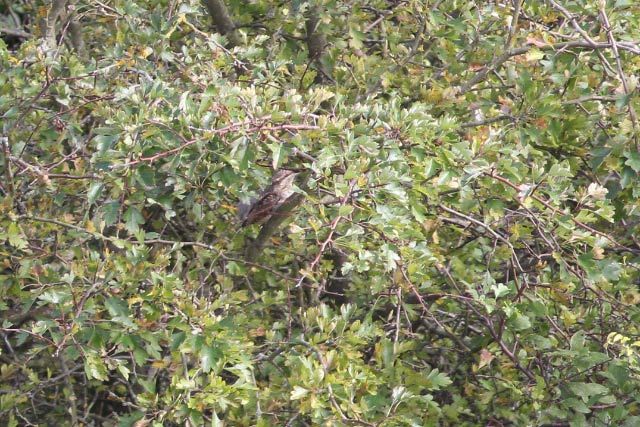 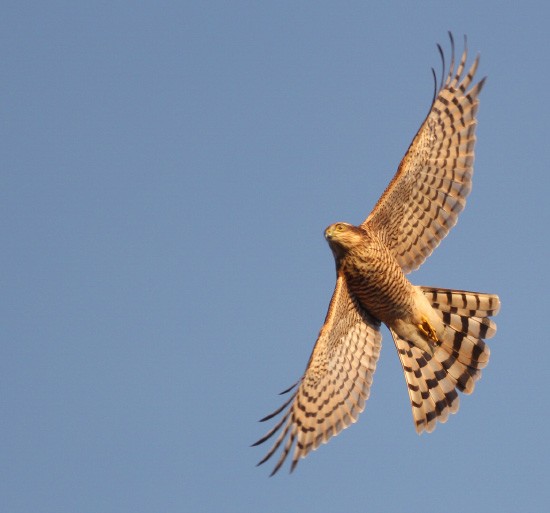 One of many Sparrowhawks making the most of September's passerine bounty (Photo: Mark James Pearson)

By the early afternoon of the 25th, I was back on a deserted Carr Naze, awaiting the arrival of a weather front forecasted to deliver rain and wind from exactly the right direction. A narrow, grassy plateau snaking out into the North Sea, its flanks intercut with deep, Badlands-style gullies on either side, Carr Naze is almost bereft of cover but for the skeletal remains of the summer's low-lying vegetation and a few stunted, bonsai-like hawthorns on its more sheltered southern slopes; its panorama, meanwhile, affords stunning views of not only the Yorkshire coastline in both directions, but an uninterrupted sea, sky and sheltered Filey Bay.

After just 18 months, its modest landmass has already provided me with a long list of unforgettable experiences, including the final day of April last year, which began with a Wryneck, Ring Ouzels, Tree Pipits, warblers and more, and ended with a few precious seconds in the company of an Olive-backed Pipit. Then there was its surreal transformation last autumn into a moving carpet of thousands of thrushes, interspersed with numerous Goldcrests, easily hand-pickable from the path; a point-blank Temminck's Stint on a sunny day last May, the first here in many years; and Red-backed Shrike and a stunning male Bluethroat in full song this spring (not to mention a subsequent summer illuminated by cetaceans).

With the mist thickening, the wind strengthening and not a soul around, a scan of the shore produced no fewer than four Red-necked Grebes, two Red-breasted Mergansers, 20-odd Red-throated Divers and large flocks of Teal and Wigeon; a stake-out of the magic bush (a lone hawthorn with a fine track record) then revealed two fresh-in migrants, side by side — a weary Song Thrush, and a far more sprightly Yellow-browed Warbler, soon flitting inland after getting its bearings. Game on. 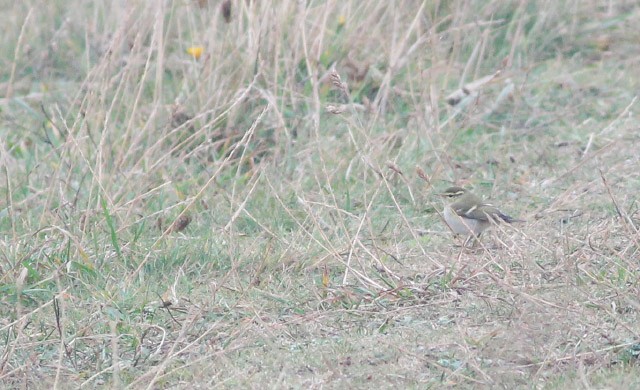 One of many Yellow-browed Warblers in the grass at the end of Carr Naze, 25th September 2013 (Photo: Mark James Pearson)

Clambering back up to the top of the slope, I looked up just as the first squadron of incoming Song Thrushes arrived, parting only to avoid a head-on collision with their wide-eyed observer. The weather worsened, the north-easterly strengthened and the heavy drizzle began, and from then on, it was the east coast — and Filey — at its most exhilarating. 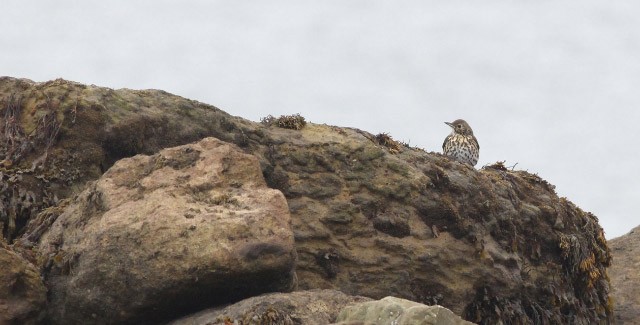 As I stood at the very tip of (formerly) dry land, a movement in the grass beside me magically materialised into another, somewhat more sodden Yellow-brow; then, with more Song Thrushes streaming in at head height, a third six-striped sprite appeared, hopping towards me along the path. Next up, a couple of Redstarts battling the elements, and a Lapland Bunting coasting westward along the cliff below me — where, clinging to a withered umbellifer — yet another Yellow-brow had made landfall.

Birds continued to arrive, with Bramblings wheezing overhead, more Song Thrushes, Skylarks and Redstarts, and a Jack Snipe ditching into long grass; Siskins, Redwings, Chaffinches and Robins added to the roll-call of new arrivals, and a Snow Bunting dropped in out of the mist and onto the cliff ahead of me, revealing — wait for it — yet another Yellow-brow close by. Fading light eventually brought the curtain down, but not before I'd had the privilege of lapping up the very best of an east coast autumn. 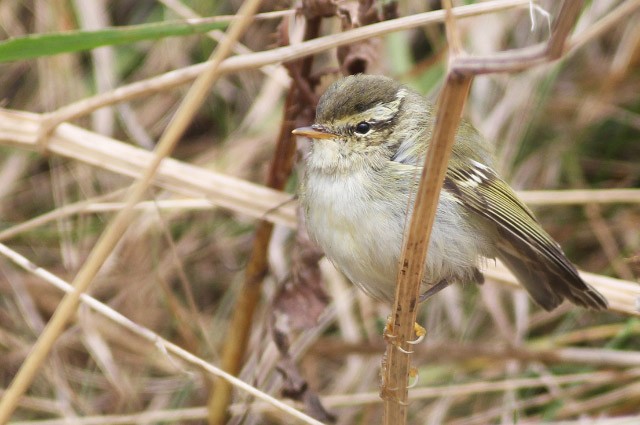 This particularly weary Yellow-browed Warbler dropped out of the sky and into the grass on Carr Naze (Photo: Mark James Pearson)

As for the last few days of the month, with surprisingly little else accompanying them, it was all about the Yellow-brows. Back on Carr Naze on the 27th, a disgruntled Redwing was the only bird present until a tiny shape descended from above and dropped into the grass just a few metres away — a distinctly knackered, somewhat overwhelmed and incredibly tame Yellow-brow. A whip around more likely spots nearby that afternoon produced a minimum of ten; by the month's end, long-standing records were falling fast, and more were to come. 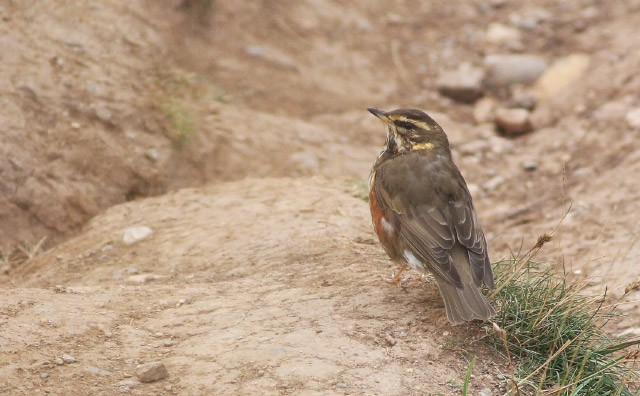 A Redwing drops in by the seawatch hide (Photo: Mark James Pearson)

After a slow start, the autumn was getting better all the time — and October had yet to begin.