After mid-September's extended easterly airflow, the dreaded south-westerlies were finally set to return — but not before a strong northerly blow was due to intervene, hopefully signing off the productive period with a bang. With the wind duly strengthening overnight, I was hunkered down in the hide just as the curtain went up at dawn on 21st, as full of anticipation as a kid on Christmas morning; rightly so as it turned out, with a special delivery just around the corner.

September seawatching on a strong northerly here at Filey can be electric, and so it felt within minutes of setting up the scope; above dramatically raging seas there was activity everywhere, with processions of Sooty Shearwaters already powering into the headwind. As is often the case on such days, some species follow certain flight-lines, and many of the shearwaters were fortunately following a fairly close one (about 450–500 m range) — firmly fixed in my field of view, with thoughts of a rarer relative very much in mind.

Soon after the radio crackled into life, with Mark (at Buckton) relaying news of a Fea's-type Petrel having passed Flamborough "about 15 minutes ago". Lacking mobile or internet coverage in the hide, we were otherwise blissfully unaware of what may or may not be approaching us; as it happened, it may not of mattered (easy as it is to say in retrospect), but it surely did no harm to have been forewarned.

A sudden surge of activity followed, including the first Long-tailed Skua of the morning, a succession of Sooty Shearwaters, a Velvet Scoter, a handful of Little Gulls and a cracking dark and stormy 'Blue' Fulmar (greeted, somewhat unfairly, with disappointed sighs), but with more than 30 minutes gone since the bird had left Flamborough's airspace, hopes began to fade and talk in the hide turned to more mundane subject matter.

I'd no intention of giving up quite so easily, however, and about five minutes later, what should magically appear in my scope but a certain star Pterodroma, keeping close company with a single Manxie and effortlessly negotiating the towering white horses. Despite the adrenalin and stuttered directions I was able to close in on the bird and get everyone onto it as it arced gracefully north, taking a good five minutes to eventually disappear from view.

Hoping others would share the same luck, calls, texts and tweets were duly transmitted, and it soon became apparent that an event was unfolding; happily, after the bird had left Filey waters it was tracked with remarkable accuracy as it headed up the coast, with constant updates on its northbound progress allowing many an opportunistic birder within striking distance to intercept it en route. By the time it'd made its final appearance, off Holy Island at 18:15, no fewer than 107 people at 17 different locations had successfully connected with this most pulse-quickening of pelagic fly-bys — a fine testament to modern communication, and all the better for sharing.

After leaving Filey waters, the Fea's-type Petrel put in appearances at many east coast watchpoints — including Whitburn, where these phone-scoped shots were taken (Photo: Mark Newsome)

Much of the following month was spent dealing with family illness (all eventually turning out fine, making me retrospectively extra grateful for the timing of the Fea's) and by 24 October it felt great just to be out on the patch again, patrolling a peaceful Carr Naze cliff-top, and soon distracted by an apparently motionless shape growing steadily larger as it approached over the waves.

Head-on and barely any higher than eye level, finally a gentle flap gave the bird a little extra lift as it reached me, catching the sun and revealing itself as an immaculate Rough-legged Buzzard — a personal patch first and the first here in years. Instead of heading inland, amazingly it turned around, dropped height, swooped so low over my head as to render the camera useless, and proceeded to glide, hover and hunt alongside me, entirely unruffled by my presence for several unforgettable minutes. The kind of experience that reminds you why it's always worthwhile, no matter what the circumstances. 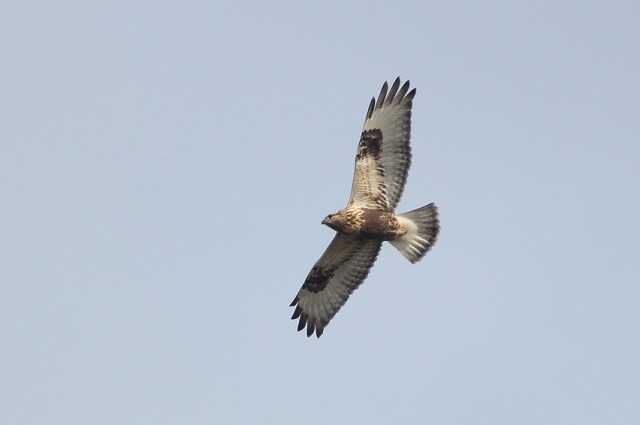 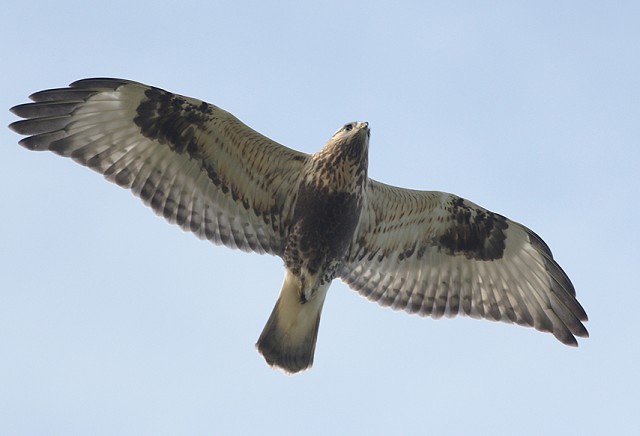 An influx of Rough-legged Buzzards in the autumn allowed many to catch up with this stunning bird of prey, but there was nothing quite like watching one arrive over the North Sea and then immediately begin hunting (Photos: Mark James Pearson)

I clearly have a thing about birds arriving in off the sea, and my experiences here — watching everything from Common Cranes to Yellow-browed Warblers negotiate the perils of the North Sea before safely reaching the modest piece of terra firma that I call home — have only served to intensify my exhilaration and appreciation of visible migration over the ocean.

A theme which happily recurred at the end of the month, when the winds veered gently into the north on 29th, encouraging a decent arrival of classic late autumn passerines as well as, rewardingly, a brief Water Pipit on the deck. All of which boded well for the following day, when a London-based birding friend was joining me for a day in the field. Despite Gareth knowing the Yorkshire coast well, I was still keen to show off the backyard at its best. 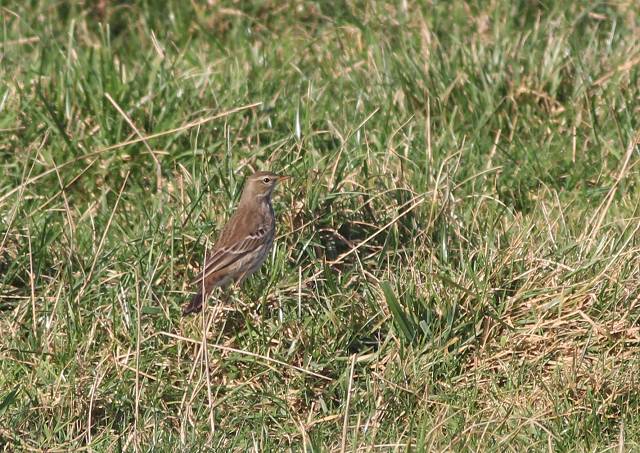 A brief Water Pipit on Carr Naze was the only one of the year of much sought-after local rarity (Photo: Mark James Pearson)

I needn't have worried, and by the close of play we'd experienced an epic, constant flood of incoming migrants that included thousands of Blackbirds, Starlings and Fieldfares, big numbers of Bramblings, Siskins, Ring Ouzels, Skylarks and Song Thrushes, a close-up Grey Phalarope by the Brigg, a showy Bittern at the Dams, dozens of Goldcrests and Robins in the bushes, flocks of Twite and Whooper Swans heading south, no fewer than five Yellow-browed Warblers (including one which we watched actively seeking shelter between the feet of a shocked tourist), and a site record count of at least 10,500 Redwings. All within just a few hundred metres and with barely another birder around. 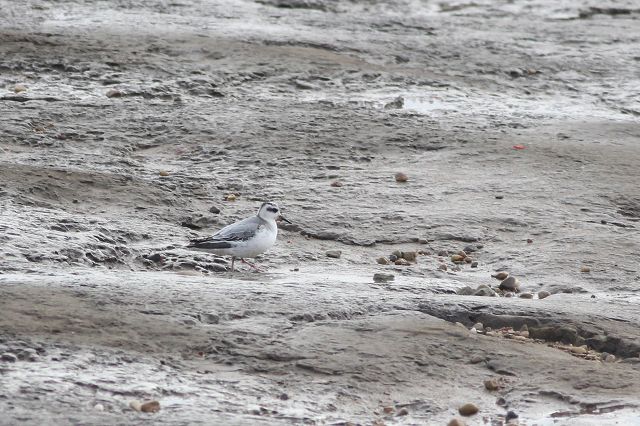 It was a record autumn for Grey Phalaropes here at Filey, and this one even proved the presence of legs on this species (Photo: Mark James Pearson)

Clearly in benevolent mood, the gods kindly proceeded to stretch out the autumn as long as they possibly could, and November was a cracker, particularly at sea. Bonfire night's fireworks began early, with another strong northerly delivering 32 Pomarine Skuas, 128 Little Auks, 200 Red-throated Divers, three Grey Phalaropes, four Short-eared Owls in off the sea (and a Long-eared in nearby scrub), plus Little Gulls, Goldeneyes, Red-breasted Mergansers, Velvet Scoters, Merlin, Snow Buntings and Twite jostling for space in a very crowded notebook. 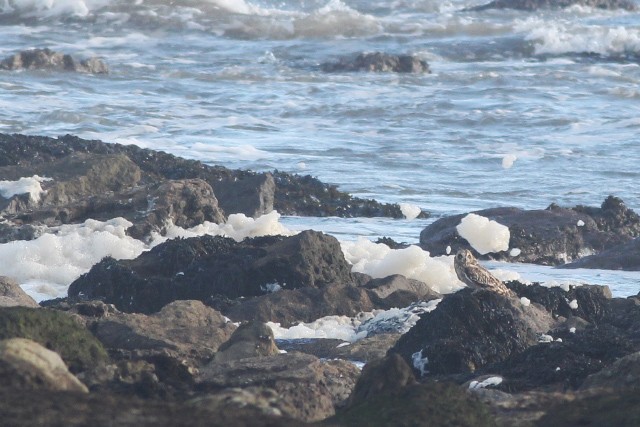 Multiple Short-eared Owls arrived from over the sea in the late autumn, including this bird which spent an hour resting on the Brigg before (just) avoiding the tide and reaching dry land (Photo: Mark James Pearson)

More good numbers of Little Auks and Little Gulls, a Black Guillemot (the second of the year), squadrons of Pink-feet and Barnacle Geese, and a further seven Grey Phalaropes (bringing the season's total to at least 15 — another Filey record) followed over the next couple of weeks, and despite being out of action for long periods, the autumn overall had become a satisfyingly entertaining one. 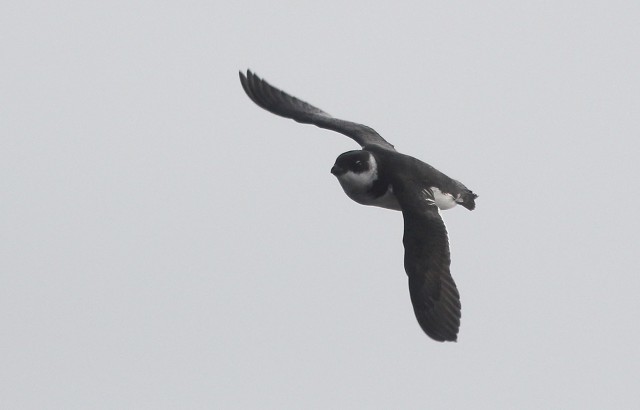 For an even happier ending, however, I'll bookend with an unforgettable seawatch. Unlike most of those described above, conditions on 1 December looked far from ideal, and I very nearly didn't bother. But it was more habit than anything that had me scrambling down the slope at dawn, surprisingly soundtracked by a Tundra Bean Goose honking northbound in the twilight; if I'd have turned around there and then it would have been more than worth it, and after a while in the hut, I was thinking that maybe that wouldn't have been a bad idea.

With effectively nothing on the move, there was just enough intermittent quality to keep me going — a Long-tailed Duck, a couple of Red-breasted Mergansers and a Goosander, and then a Great Northern Diver south. Red-throats kept trickling through, which (crucially) made for something to count, and then at 10:20, a Black-throated Diver cruised by with two of them — three Diver species within 35 minutes, a surprisingly good result.

Again entertaining thoughts of quitting while I was ahead, a monster of a diver then appeared, well to the north, lumbering south: transitional plumage, banana-shaped front end, huge, heavy bill angled upwards... and pale; not just reflected, momentarily pale, but clearly white(ish) in the flat, overcast light — surely it couldn't be?

But it surely was a White-billed Diver, and somehow I'd just enjoyed four diver species, within 45 minutes, in an otherwise quiet seawatch that almost didn't happen. Rushed messages to potential observers ensued, followed by the news that Brett had watched it passing Flamborough 13 minutes later (according to his calculations, at a speed of 32mph); and almost a year to the day since a certain auk had a similarly euphoric effect. Early December? It's the new October.

So after a desperate start, autumn 2014 provided a fairytale national rarity, record-breaking falls, a fistful of county rares, incredible sea-watches, dozens of local rarities, and yet more unique and unforgettable experiences to add to an already overflowing archive over the last couple of years. Here's hoping the bar stays as high for 2015.