Hard as it might be to believe that two and a half years have passed since my wife Amity and I washed up here on the North Yorkshire coast, it is indeed that long since we migrated from the dark heart of the capital to the sleepy, picturesque provinces; that long, too, since the birding god responsible for tickertape welcomes conjoured a fresh-in, totemistic Great Grey Shrike on my very first circuit of the new manor in April 2012. Time flies when you're having fun (of which there's been plenty), but it surely bullets by when you're hammering a new and productive patch.

And so to 2014; a year with a lot to live up to, after a preceding 18 months or so which had raised the bar pleasingly, and perhaps perilously, high. Truth be told, that was how it seemed to be unfolding, after a spring which — despite much patient toil in the field — was ultimately somewhat underwhelming. There were highlights, of course, with a personal patch first Honey Buzzard, a Night Heron alongside an unfairly upstaged Spoonbill, yet another Crane (taking my tally into double figures here), multiple Icterine Warblers, Ospreys and Red-backed Shrikes, and a late April birthday that gifted me both Dotterel and Richard's Pipit. But the season overall failed to find a higher gear, and perhaps my luck was finally running dry.

After much anticipation autumn finally arrived, but August was soon ominously echoing both of my previous two here — that is, choice seawatching sessions thankfully compensating for a tumbleweed-laden terra firma, before the latter eventually registered a pulse with a hard-earned passerine scarcity or two at the tail-end of the month. August 2014 was to follow type almost exactly. Well, almost.

A lesson happily learned in my short time here is that, if you put the hours in here during migration periods, the sea will always provide. It wasn't a classic August over the waves, but many enjoyable hours spent in or by the hide on the Brigg reflected a wide range of non-terrestrial migration, as well as providing my second patch Cory's Shearwater, the first Sooty Shearwaters, Long-tailed and Pomarine Skuas of the season (among commoner congeners) and both Little and Black Terns. 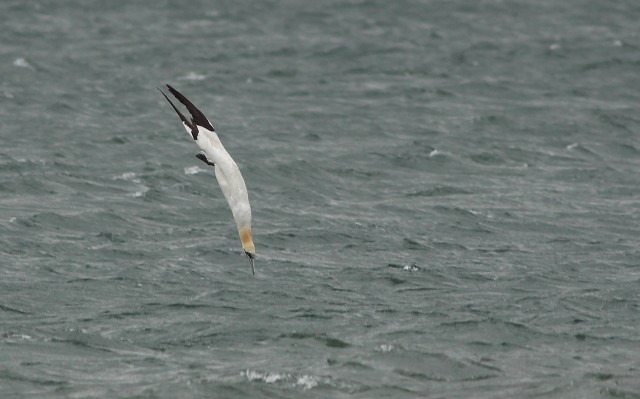 But back to that hard-earned passerine scarcity. Finally, one morning towards the end of the month, a scattering of migrants, including Whinchats, Northern Wheatears and warblers, raised hopes of something a little more exotic; and so at last it came to pass. An unfamiliar shape and a flash of cobalt disappeared tantalisingly behind Short Hedge (the same small stretch of hawthorn that has given me Dusky Warbler, Wryneck, Greenish Warbler & Red-breasted Flycatcher in the last two years). After a nail-biting pursuit, there it was, skulking deep in the foliage, in all its vivid glory — a pristine blue-morph Budgerigar. 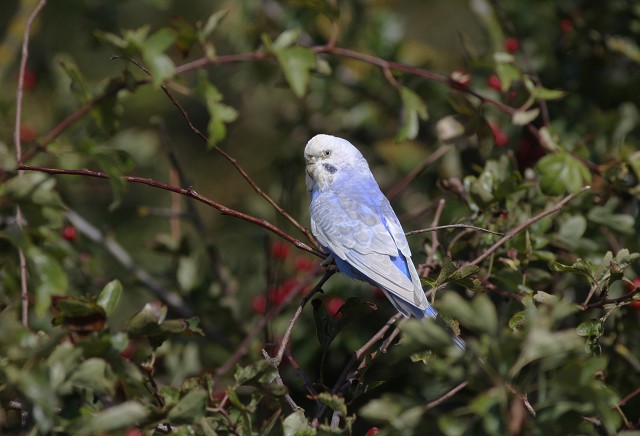 Alas, the crowds were not destined to enjoy the same mesmerising views I'd been so fortunate to gain, with the hapless escapee effortlessly dispatched by a Sparrowhawk on its second day of freedom. Thus, the stand-out passerine of the autumn so far had come and gone, leaving behind only a scattering of ostentatious, bloodied feathers as a taunting reminder of the most forgettable August on the land I'd yet encountered.

By now, though, I'd theoretically acquired enough of a personal frame of reference over the last couple of years to account for the ebbs and flows of localised east coast birding, and enough local knowledge to play the long game; and with August over and done with, September began in refreshingly slate-cleaning mode.

Commoner migrants began to move in earnest, and a damp, murky start with a hint of an easterly on the 4th produced a welcome sprinkling of Pied Flycatchers, Common Redstarts, Tree Pipits and Whinchats, and then, better still, a surprisingly early Red-breasted Flycatcher; happily the harbinger of a good autumn for this species, and — as the first (genuine) passerine scarcity of the autumn thus far — akin to the sound of a starting pistol. 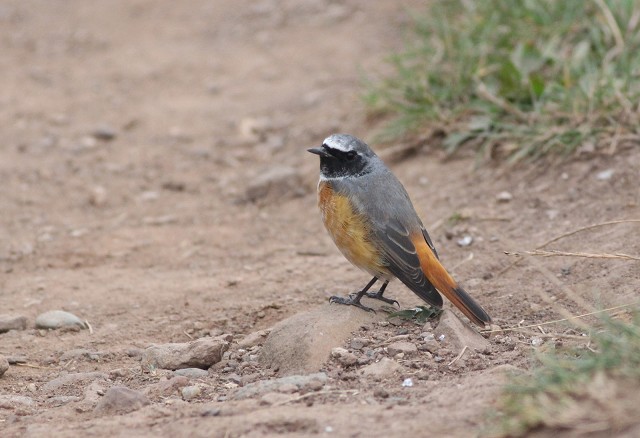 The grassy slopes of Carr Naze can allow amazing opportunities to get close to otherwise more skulking migrants, like this male Redstart (Photo: Mark James Pearson)

Encouraging conditions were set to continue throughout the weekend, too, but — not for the last time this autumn — other commitments had to be honoured. It can be hard enough leaving the patch at any time, but it can be agony to do so when the season and the weather charts finally and tantalisingly align …

Still, there are a great many worse places to be in such circumstances than Spurn. There to represent Filey Bird Observatory and Yorkshire Coast Nature at 2014’s Migration Festival, we were soon immersed in its unnervingly catch-free fantasy world of birds; no packs of dogs spilling from rows of 4x4s, no meagre pockets of habitat trashed and neglected, no monocultural farmland deserts — just an enviable variety of quality migrants and habitats.

Not only was the birding first rate, but the convivial atmosphere of the Migfest made for an inspiring and productive weekend all round. It was a pleasure too to connect with various good people, and to reinforce what is an increasingly strong relationship between the three Yorkshire Bird Observatories (you can read my review of the whole weekend here). 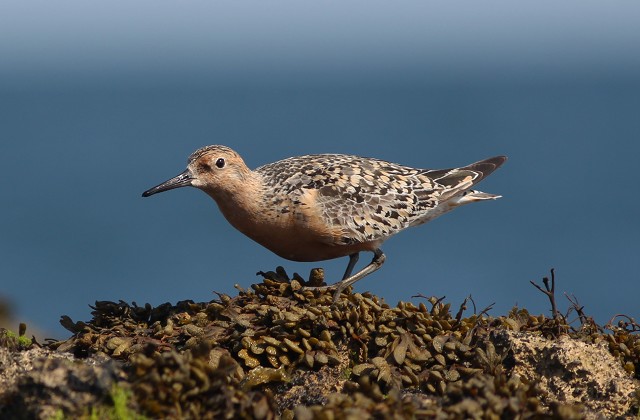 Breeding plumage waders can be a treat on the Brigg well into early autumn, including Knot (Photo: Mark James Pearson)

Back on the patch as soon as I was able, a seawatch on the 9th was almost blank until two treats at the death — a summer plumage Black-throated Diver and a Black Guillemot in the bay. Activity on the land soon picked up again as the south-easterlies held sway: a few more Whinchats and Northern Wheatears here, then odd redstarts and flycatchers there; an early Brambling and the first Lapland Bunting in off the sea, then Goldcrests and Chiffchaffs into double figures; then an exceptional mass exodus of 2,000 grounded Meadow Pipits into the mist on the 13th, followed by my first Yellow-browed Warbler of the year the following day ... as each day passed and the system held, variety and possibilities increased incrementally.

By the 15th, an early start in the hut produced a close-in Balearic Shearwater north, good numbers of Sooties, Manxies, Bonxies and Arctic Skuas and the (increasingly popular) Black Guillemot still in the bay, but a thick, impenetrable fret soon reduced visibility to almost zero. Stood on the grassy plateau of Carr Naze in light drizzle and with the breeze now in the north-east, however, it had to be worth hanging around, just in case a little passerine magic happened.

It was, and it did; after a couple of blissfully undisturbed hours I had a cast of arrivals around me that included Common Redstarts, Garden Warblers, Whinchats, Northern Wheatears, Common Chiffchaffs, Willow Warblers, Pied Flycatchers, Sedge Warblers, Whitethroats and Song Thrushes, as well as the first Ring Ouzel, Fieldfare and Redwing of the season and another Lapland Bunting off the sea — all on and around a modest but magical east coast peninsula. 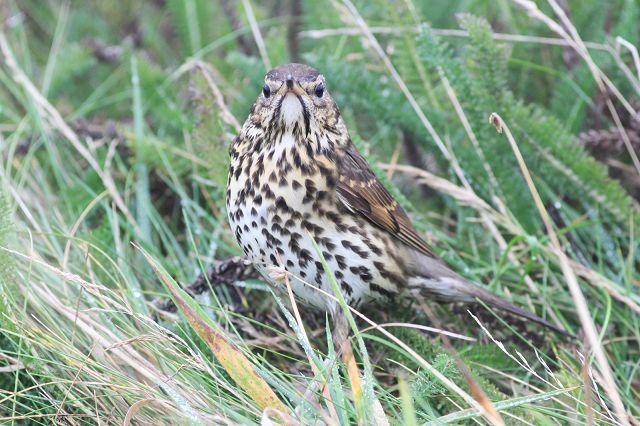 Continental Song Thrushes were dropping out of the fog and were too exhausted to fly during the middle of September
(Photo: Mark James Pearson)

And it soon got better still: a half-familiar call echoing in the fog turned out to be a Dotterel — remarkably my second of the year — disappearing into the gloom, and then a Red-breasted Flycatcher materialised alongside its two commoner cousins deep within the dripping foliage. There are worse ways to round off a fine day's birding than watching all three Ficedulas fresh-in and wing-flicking at each other in the same stunted sycamores.

The following day provided a surprise sprite in the attentuated, teardrop shape of a Wood Warbler, a personal patch first available for just a few seconds before evaporating into the shady canopy of Long Lane. Hardly a big deal, you might think; but in context, pure gold dust, and it could easily be many years before the next. Remarkably, the weather system continued to hold, and as each day passed, the likelihood of a scarcer arrival amongst an increasingly tasty cast of migrants was becoming ever stronger. 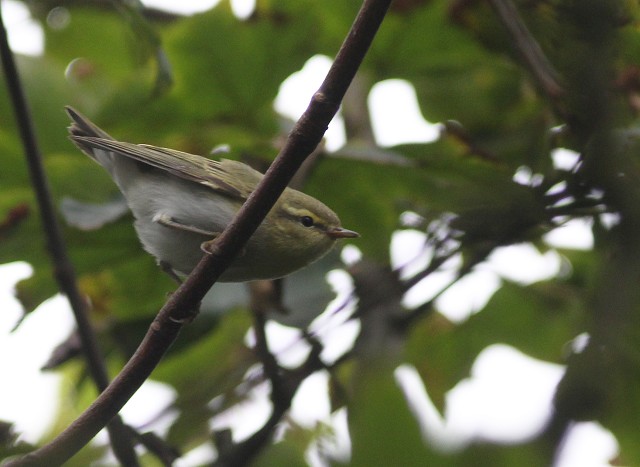 So far so good, then; but back to prior commitments. Many months ago, we'd luckily nailed another kind of rarity altogether in the shape of tickets to see Kate Bush — an unmissable opportunity and, despite the troubling date, the chances of our whirlwind trip to London coinciding with prime birding were realistically very slim. A south-easterly airflow in mid-September building to a peak on the very day of the show was about as likely as, well, getting tickets to see Kate Bush, and the smart money would be on an uneventful 24 hours back home with a nice, boring south-westerly and barely a migrant to shake a 'scope at.

So much for the smart money. You could feel it coming, and an increasingly desperate fogbound session on Carr Naze before the journey beckoned — Jack Snipe, redstarts, distinctly un-British-looking Willow Warblers and a bullet of a Merlin — did little to delay the inevitable, which followed swiftly in the form of a barrage of texts and calls just as I boarded the train: a Rustic Bunting had just dropped onto the path on Carr Naze, part of my circuit multiple times per day, and one that I'd dutifully patrolled just minutes earlier.

Still, Kate was great, and I was back in the field by mid-afternoon the next day, joining local comrade Dan (who was on a roll, having briefly refound the Rustic in the morning, as well as another Red-breasted Fly among other treats). A new Yellow-browed Warbler and more arrivals later, we'd reconvened by the Top Scrub, reflecting on our fortunes before heading home. But not before, as the last of the light faded, the gods intervened to restore the imbalance in Emberiza karma: feeding clumsily among the wilting sycamore leaves before us was a single bird — a close-up Little Bunting, the first here in 13 years and a beautiful, streaky little bundle of vindication. 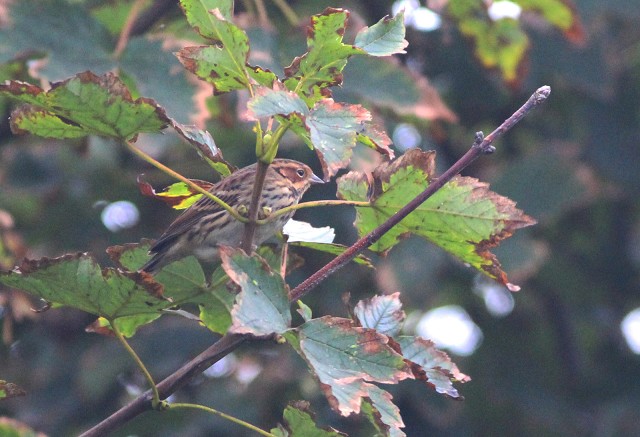 The next few days produced more fresh-in continental entertainment, including yet another Red-breasted Fly, and by the 20th, the month had well and truly broken the cycle of previous Septembers (with their inherent minimum three-week waits for land-based action). With two thirds of the month gone, the ebb and flow of quality migrants over the preceding weeks was plenty reason enough to be cheerful.

No big one, perhaps; but Filey isn't the kind of place to suffer glory seekers gladly, and experience had strengthened my resolve; I was in no rush, if it were to indeed come at all. It took until December last year, after all (and what a reward that turned out to be); but as it happened, I wouldn't have to wait quite so long this time …