The exquisite Red-fronted Macaw is a living gem of the eastern foothills of the Andes. It gives colour to a semi-arid landscape dominated by thorny scrub and cacti, the product of centuries of human alteration of the native dry forest habitat. The Red-fronted Macaw is endemic to a small area of the inter-Andean valleys of Bolivia where, in addition to the impact of long-term impoverishment of the habitat, it has suffered from illegal trade and persecution as a crop pest. The result has been a decline in the wild population, from perhaps as many as 4,000 individuals three decades ago, to what BirdLife International now states as currently 600-800 total individuals. Due to its precarious situation, Red-fronted Macaw is classified as Critically Endangered.

Research funded by the Loro Parque Fundación has revealed that the population, despite high dispersal abilities, is genetically structured into four different sub-populations, with almost no gene flow between them due to strong fidelity to birthplace. Apart from a few pairs that breed in palms, all breeding takes place in colonies on cliffs, where the individual pairs nest in crevices. 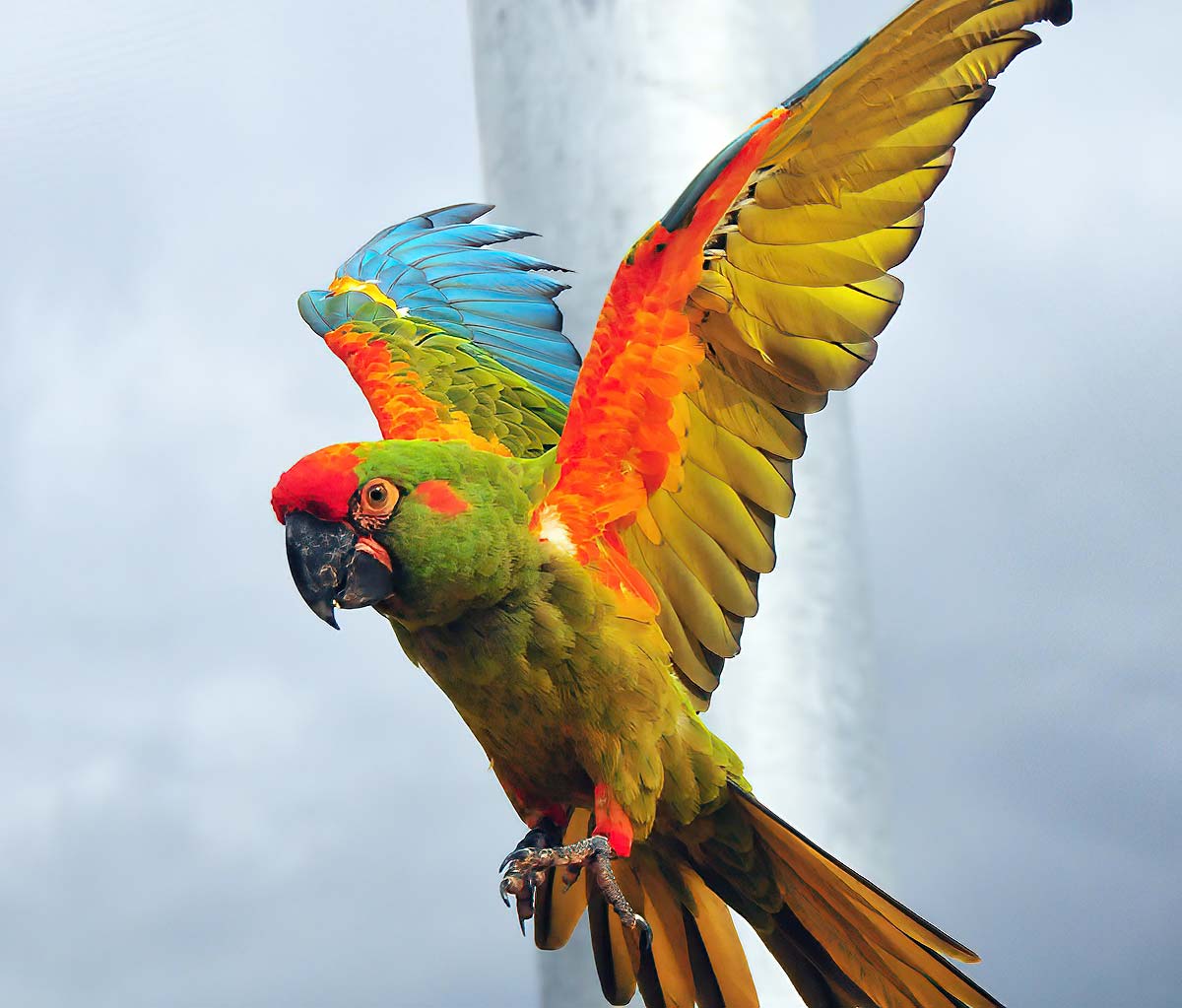 On the face of it, the outlook for the Red-fronted Macaw is bleak. However, two recent studies raise the possibility of a brighter future for the species than we would expect from the evidence to date. In the first study (Herzog et al 2022), despite the remoteness and inaccessibility of most of this region, the researchers made a rigorous collection of data on the total, local and breeding population sizes of Red-fronted Macaw in its entire geographical distribution. They compared their results with those of the previous most recent survey, conducted in 2011, which reported a total of 807 macaws and a breeding population fraction of about 20%. In 2011 the macaws were disjunctly distributed across eight breeding and six foraging areas.

The study 10 years later increased the survey effort and geographic coverage, surveying the entire known breeding range in four watersheds, and focusing on nesting sites. The researchers have reported an estimated total population size of 1,160 macaws and a breeding population fraction of 23.8-27.4% (138-159 nesting pairs). They also discovered four new breeding areas. Watersheds and breeding areas differed widely in nesting pairs and total macaw numbers. One watershed (Mizque) held 53% of the species' breeding and 41.5% of its total population and had the highest fraction (30.7-34.9%) of the population breeding, whereas another watershed (Pilcomayo) had the lowest values (6%, 8.5% and 14.1-18.2%, respectively). Two of the four documented genetic clusters (sub-populations) each held well over 50 breeding individuals, and two of the eight breeding areas documented in 2011 were found unoccupied in 2021. The reseachers suggest that the Red-fronted Macaw no longer meets IUCN Red List criteria for Critically Endangered species and that it should be downlisted to Endangered. 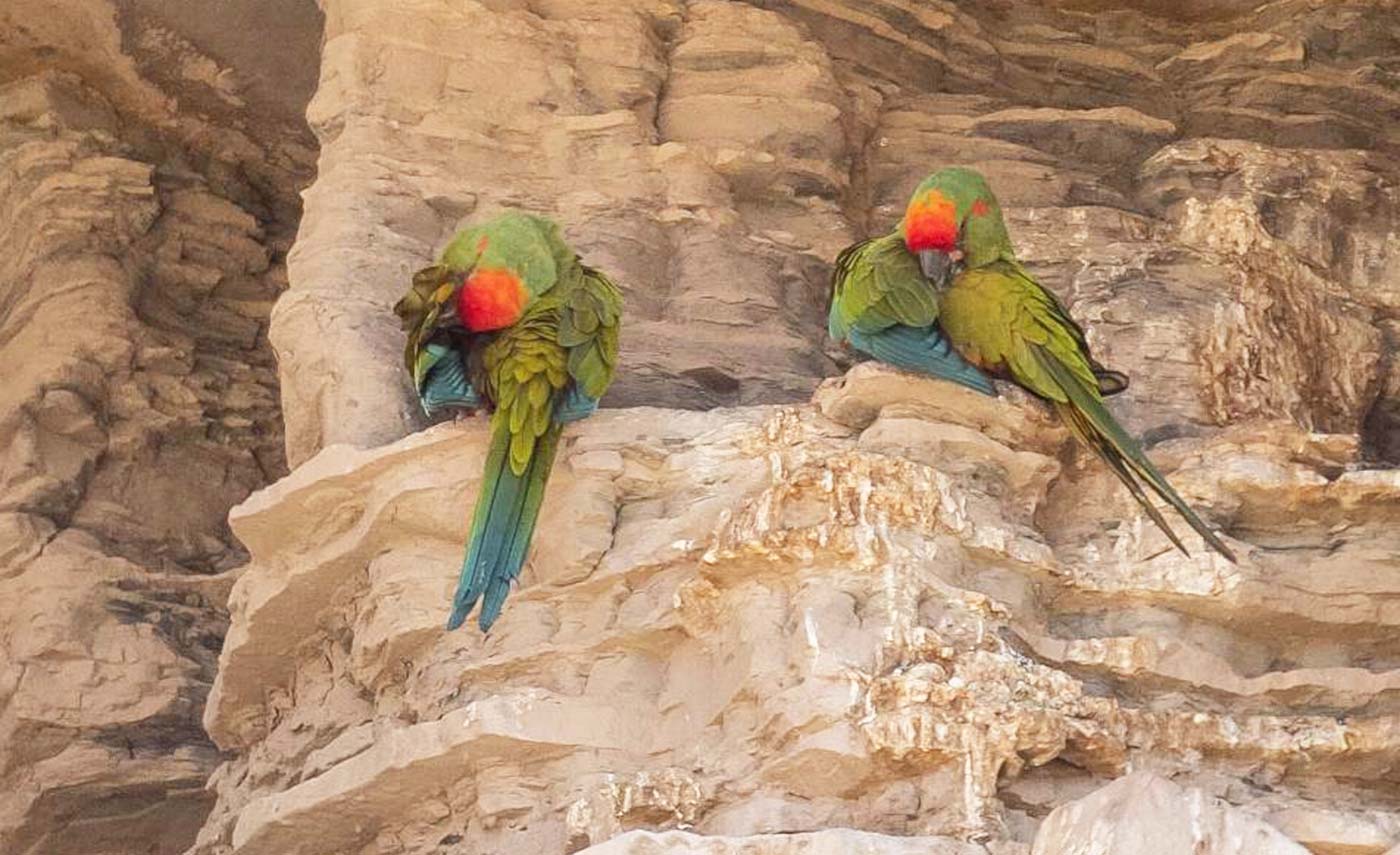 The other study (Hambuckers et al 2021) acknowledges that today's threats challenge the short-term survival of Red-fronted Macaw, but concludes that predicted changes in the landscape and food resources offer positive perspectives for the species in the longer-term. The approach taken by these researchers was to consider Red-fronted Macaw as a tropical mountain bird, a category against which the main threats are habitat destruction and climate change. Red-fronted Macaw breeds between 1,100 and 2,700 m asl, and disperses higher to about 3,000 m and lower exceptionally to 550 m. Climate change is supposed to particularly affect the tropical Andes and notably Bolivia, and climate change scenarios suggest significant warming and important modifications of the precipitation regime. Tropical mountain birds are particularly at risk because, when shifting their distributions upwards to higher altitudes, the new area of occupancy narrows. The researchers contemplate the possibility that, given the magnitude of warming predictions, sufficient steep river cliffs for nesting and appropriate food resources might not necessarily be available at higher altitudes.

To predict changes in the distributions of animals, and also of plants, Species Distribution Models (SDMs) are commonly used with climate information only. However, such use of SDMs neglects the evolution of other components of the environment, like food resource availability. Therefore the researchers compared results of using SDMs with results from using a process-based Dynamic Vegetation Model (DVM), where they included in their analysis the environmental conditions relating to all known food plants of Red-fronted Macaw. Under future climates, the macaw's SDM showed increased probabilities of presence over its area of distribution and connected range extensions. For the food plants the DVM produced increases of productivity, occupancy and diversity, also towards higher altitudes.