The adventure began as I stepped off the plane at Lisbon airport and was cheerily greeted by my guide, Fernando Romão. Birding in Iberia has long been on my to-do list and the prospect of a trip to Portugal saw this year's summer doldrums fly by. After just a few minutes in the car with Fernando as we drove out of the city, picking his mind about Portugal's birds and what we were likely to see, I could tell that I was in capable hands.

We were on the road to Peniche, top surfing destination and home of the ground-breaking Seabird Count, where we were to collect Anders Wirdheim of Sweden, who had already been scanning the waves for several days. Over some fine local seafood, Anders regaled us with the riveting events of the previous few sessions, one of which involved huge counts of shearwaters, skuas and Grey Phalaropes. I had seawatching to look forward to in a few days' time but first came a tour of the Centro Region, an area often underrated by visiting birders but in fact full of opportunity. Time was of the essence and we began the long drive to Castelo Rodrigo, a small but picturesque hill-top village overlooking the Douro Valley and the Spanish border, bearing an eventful history of territorial disputes.

Hopes of doing any birding once we arrived were thwarted by the rapid onset of dusk — it had indeed been a long day of travelling — but Fernando had a very special cultural footnote up his sleeve with which to redeem the day as one for Anders and I to remember. Ana Berliner, landlady of Casa da Cisterna (where we stayed), took us out in a 4×4 along a jarring track to a particular point in the Côa Valley where a carefully angled torchlight unveiled an otherwise cryptic entanglement of overlapping engravings. Aged at perhaps 30,000 years and giving the area UNESCO Heritage Site status, the shallow lines depicted a number of large herbivores and a single fish, apparently a salmon jumping upstream: a helpful hint to passers-by and future generations, perhaps. The exposed rocks holding the display had withstood the elements well enough for the work to appear as though it had been done not long before our visit, and with no signs of modern life on that still, crystal clear night, I could just imagine catching the shadow of the Ice Age artist. 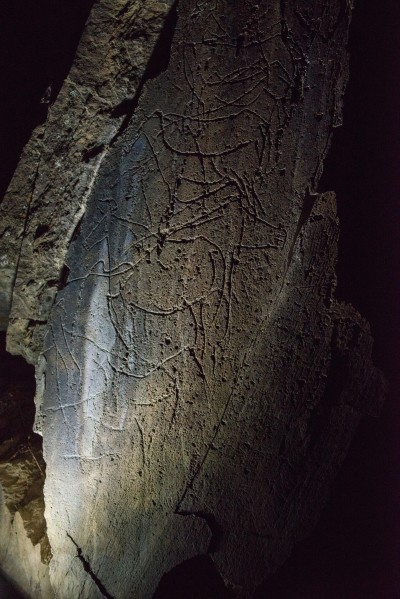 Faia Brava is a birder's dream. The only private nature reserve in Portugal and a key site in the Rewilding Europe initiative, it was set up around the Millennium and is funded by a network of European conservation organisations. Its 856.87 hectares remain one of the last areas of wilderness in southern Europe and are served by 15 kilometres of visitor trails. The reserve is a significant and important refuge for a range of birds, especially cliff-nesting species. The morning after marvelling at the engravings, we took another bone-breaking track to a rather unique bird-feeding station. As Anders and I gazed out of the cosy, specially designed hide and Fernando served the order of the day, courtesy of the local butcher, the anticipation heightened; we could already see some customers circling in the distance, their curiosity no doubt piqued by the sight of our 4×4 arriving.

They must have been hungry, for it was only moments before we heard the air being pummelled by the heavy wing-beats of Griffon Vultures. They alighted on the rocks at the back of the clearing and peered longingly at the slabs of meat laid out in front of us. More and more arrived out of nowhere and the birds began to squabble among themselves like inmates eager for the canteen to serve up. The vultures were evidently bursting to tuck in but seemed to be held back by a touch of dubiety. However, any mistrust was soon overridden: these birds were not going to be waiting for grace to be spoken. The feast began. For the best part of half an hour, we were treated to engrossing close-range views of the ill-mannered but somehow majestic scavengers as they bickered over morsels of flesh, spread their wings and raised their feet in a bid to intimidate subordinates into submission. 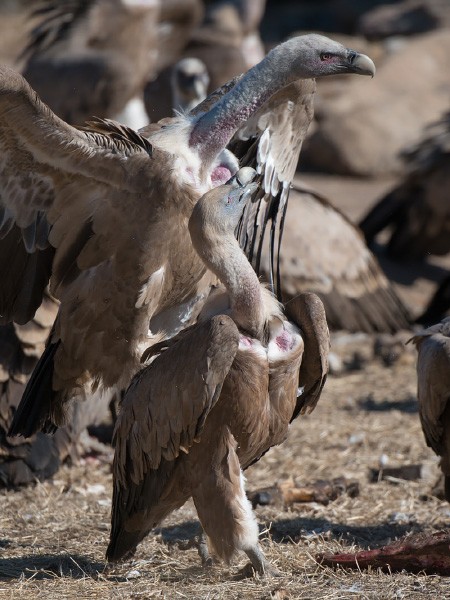 Once almost every last piece had been polished off, it was time for us to move on. Whistle-stopping at a couple of other areas of the reserve yielded views of Golden Eagle, Thekla Lark, Hoopoe, Red-rumped Swallow, Crag Martin and Hawfinch, while the number of migrant Pied Flycatchers skipping between the bushes was notable. Our schedule meant that we couldn't loiter for very long, so no doubt missed out on some species attainable with a little more effort, as an amazing range of birds is possible in Faia Brava. For some, a visit in the spring or summer is necessary, but star attractions range from nesting Bonelli's Eagle, Black Stork and Egyptian Vulture to Little Bustard in the surrounding fields, Western Orphean Warbler and Blue Rock Thrush. 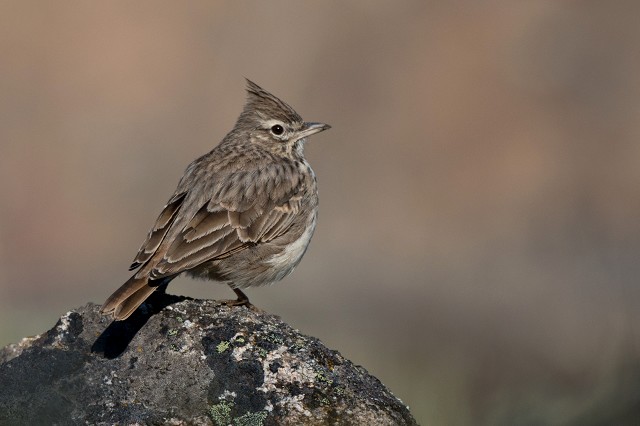 Our next stop was another hill-top village, Monsanto, once voted the 'most Portuguese village in Portugal'. On the journey we had been entertained by gangs of Azure-winged Magpies flopping across the road, and a single Golden Eagle. Once I had settled into my hotel room, I stepped outside to enjoy the breathtaking views across the village and down the hill, as well as the swarms of Crag Martins and Red-rumped Swallows chattering away as they skimmed the roof-tops; in their midst I locked onto the silhouettes of two swifts, both sporting a gleaming white rump and throat along with a deeply forked tail. They had to be White-rumped Swifts! Over dinner I informed Fernando and Anders, both of whom were slightly gobsmacked, as it turned out that Monsanto is not a known site for this fascinating species, which is still very much a scarcity in Portugal and has a habit of evicting Red-rumped Swallow pairs from their nests, then used by the swifts as their own.

Fortunately, Anders and Fernando managed to catch up with the swifts the next morning, when we were treated to a pleasing set of birds around the village, such as Blue Rock Thrush, Short-toed Treecreeper, European Serin, Cirl Bunting and, best of all, a pair of Booted Eagles, which circled above us for a few minutes just before we left. 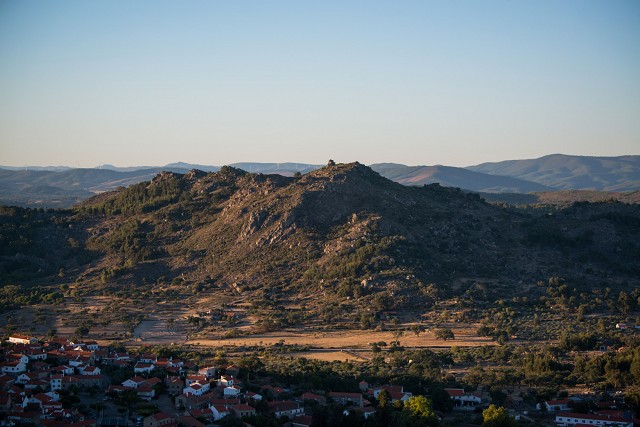 Our drive to the International Tagus Natural Park produced some highlights in itself, with the brakes slammed particularly frequently as we passed through the Zebreira area, which produced a stunning Black-winged Kite, two Black Vultures, a Short-toed Eagle and several Griffons, not to mention more tantalising views of the swaggering Azure-winged Magpies. We stopped by the River Erges which marks the border with Spain; it was once a reliable site for Black Wheatear but is still a brilliant place to observe Golden Oriole and European Bee-eater in the spring, as well as Black Stork. In our short vigil, we picked up single Black Vulture, Golden Eagle and Short-toed Eagle, along with good numbers of Red-rumped Swallow and Griffon Vulture. Fernando had a serene send-off in mind for the end of our trip, with a boat trip along the Tagus at Vila Velha de Ródão. Before we boarded, we admired the river from the tower, where a Blue Rock Thrush appeared at the entrance and we came across a couple of Two-tailed Pashas. He reminded me that, up until a couple of years ago, a long-staying Rüppell's Griffon Vulture had frequented the area. 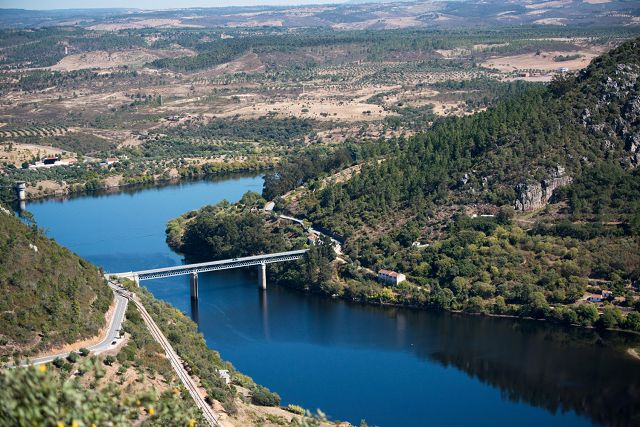 Kingfisher after Kingfisher after Kingfisher darted from the river bank as we later motored along the water, under the gaze of spiralling Griffons, tailed by scores of busy Crag Martins. Two White Storks gracefully lifted from a sandy island as we passed. Upon mooring, there was one last bird for our trip list before we set off for Peniche: a gently argumentative murmur attracted our attention to a flock of Common Waxbills in the reeds by the shore, a widespread feral (but quite attractive and apparently harmless) species in Iberia. Fernando had organised a deeply enjoyable taster of birding in central Portugal for Anders and me. We yearn to return to see what time constraints had forced us to miss, and a spring trip is definitely on the agenda. The region has a huge amount to offer the visiting birder, from unique and intimate photographic experiences with raptors such as Griffon Vulture, to a range of other cliff-nesters and passerines — I cannot recommend it enough, especially for those, like me, whose foreign birding career is relatively fresh.

Special thanks to Fernando Romão (fotografiaenatureza.com).