Waders are one of the most threatened bird groups in the world, with countless studies having demonstrated the negative impacts of humans on them, whether it be large-scale (for example, habitat loss and climate change) or small-scale (such as vehicle use, running pets or flying kites). Human disturbance, whether it be recreational use of beaches or coastal modifications, is well known to have an impact on waders in the breeding season, but the new research has demonstrated that there can be significant impact on non-breeding sites as well.

Most Piping Plover research has focused on the breeding season in an attempt to directly influence population numbers, but the new study makes clear that efforts are required throughout the year in all locations in a species' range to help the its conservation.

Virginia Polytechnic Institute and State University's Dan Gibson and colleagues monitored Piping Plovers year-round to determine the health and behaviour of individuals, with body condition, survival and site fidelity being of particular interest. Plovers in disturbed areas proved to be significantly lighter in mass, due to the birds not obtaining enough food. Given their poorer body condition, it should be no surprise that birds in these disturbed areas also had lower survival rates. 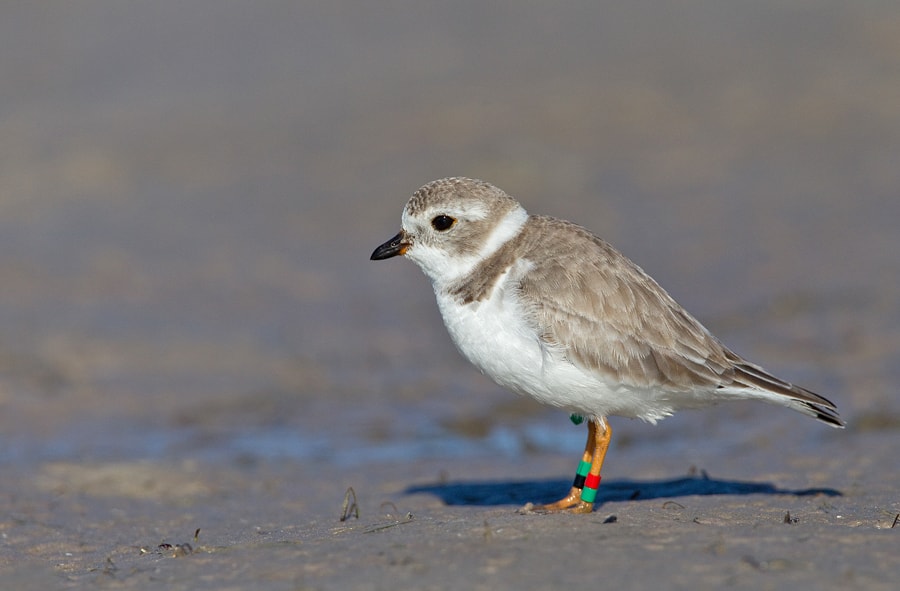 Piping Plover is a species of conservation concern in the United States (Paul Cools).

It is well known that Piping Plovers are strongly site faithful on their breeding grounds, but this study supports that fidelity continues throughout the year. While physically capable of changing location, it was not common for individuals to do so, even if there was a high level of disturbance. The lack of movement by disturbed individuals suggests that aspects of the species' life history such as fidelity constrained individuals when making seemingly adaptive habitat-use decisions. Some of the strategies used on the breeding grounds (for instance, reducing human recreation, roping off areas and allowing no dogs on beaches) may be beneficial to also introduce on to the non-breeding grounds to ensure year-round protection for this threatened shorebird species.

Lead author Dan Gibson commented: "We have a lot of opportunity to engage with the public in what exactly our research is about. We often try to stress that the impact individual recreation has on a shorebird is practically non-existent. However, if every person who uses a beach on a given day influences how these shorebirds feed or rest, those minute impacts can begin to add up over the course of a season [and] can manifest themselves as reductions in individual body condition, and ultimately their ability to withstand bad weather conditions or successfully migrate and find a mate. We try to stress that small changes in how we use a beach, such as keeping dogs on a leash or avoiding running through groups of birds, can really add up to substantial improvements in the overall quality of coastal habitat for shorebirds."

Jonathan Cohen, a shorebird expert not involved in the research, added: "This study availed itself of the unique resource that range-wide banding efforts have provided for the study of the demographics of the endangered Piping Plover and successfully attempted the difficult task of teasing out the sometimes subtle effect of disturbance in non-breeding areas on annual vital rates.

"The finding that this endangered species may not readily abandon habitat that is detrimental for fitness was surprising, and warrants immediate attention from the conservation community."