Picture perfect: how to photograph Hawfinches

The largest invasion of Hawfinches ever recorded in Britain took place last autumn, and good numbers have remained at many sites during the winter months. As news came in of more and more flocks arriving, I was keen to get a glimpse of this rarely seen finch.

With fewer than 1,000 breeding pairs in Britain, Hawfinch populations are critically low and the bird is Red-listed as a Bird of Conservation Concern, according to the RSPB. While our wintering population is usually bolstered by arrivals from the Continent in varying numbers, this year’s total has been amazingly high. In November 2017, as the invasion unfolded, the British Trust for Ornithology (BTO) revealed that the reporting rate on BirdTrack was 12 times higher than the historical average.

At first most reports came from southern parts of the country, but when I heard news of sightings at the Yorkshire Arboretum, close to my gallery in Malton, North Yorkshire, I headed straight out to the site.

Yorkshire Arboretum is a botanical tree garden on the Castle Howard Estate, with connections to Kew Gardens. Among the tree species grown there are hornbeams – and Hawfinches famously love to feed on hornbeam seeds. I headed straight to a stand of these trees which were still laden with seed. I managed to see plenty of Hawfinches flitting through the branches, but it was difficult to get a clear look at them through the leaves. The birds were skittish and shy, in line with their reputation of being difficult to observe well.

The noise the flock made as the birds cracked open the hard hornbeam seeds gave them away. The call is distinctive, once you know what you are listening for: a characteristic contact 'whistle’, and a loud, slightly 'spitting’ tic recalling Robin or Song Thrush. 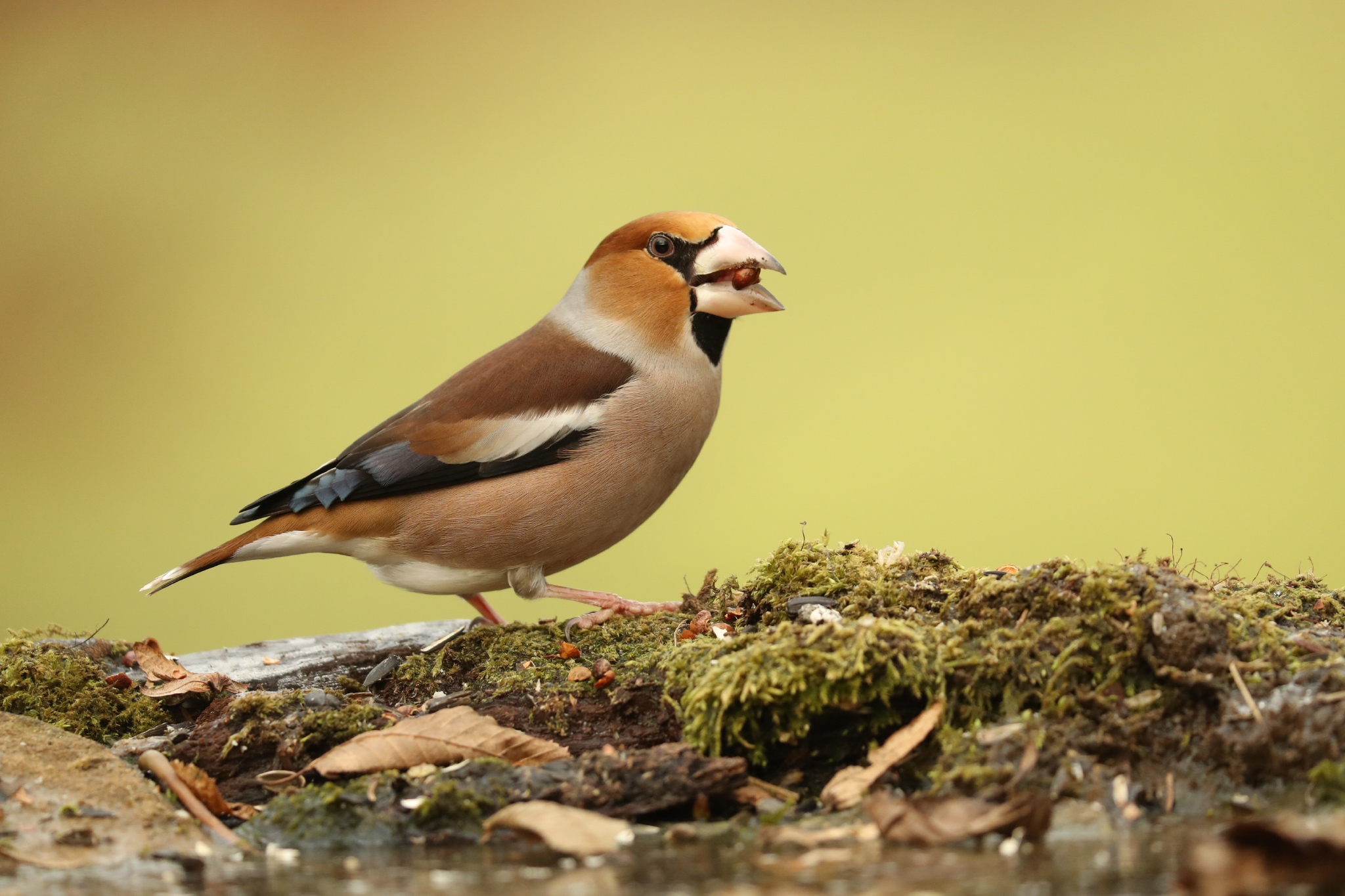 A huge influx of Hawfinches in autumn 2017 resulted in large numbers taking up winter residence across Britain, including plenty at the Yorkshire Arboretum.

Hawfinches are notable for their unusually large beaks and strong jaws. The avian equivalent of a fireman’s hydraulic cutter, these beaks can shear open hawthorn, cherry and even damson stones. Scientists have measured the crushing force of this bill and found it to be 50 kg – quite extraordinary for a bird that weighs at most 70 g.

Like all finches, Hawfinches use the cutting edge at the back of their bills to hold a stone while they crack it open and skilfully extract the kernel with their tongues. This process is known as 'mandibulating’, and a Hawfinch is so adept at being able to strip a seed undamaged from its husk that it can extract 15 seeds a minute. I know this because I timed one!

Through a telescope I was able to study a male, and was taken aback by its beauty. A bright burnt-orange head and subtler auburn colouring along its back and wings is set off by an iridescent 'sail’ along its secondaries.

I was hooked. I decided I wanted a much closer look at these remarkable birds. I approached the arboretum and they agreed that I could put up a hide while the grounds were closed to the public for winter. I spent the next week shut in my workshop building a hide. I also constructed an eye-level 12-ft infinity pool to provide water for the Hawfinches to drink from, and to provide a reflective surface for photographs. It needed to be strong since it would hold almost a ton of water. I also built a large bird table – again at eye level to the hide. I wanted this to mimic a woodland floor and covered it with soil and leaf litter. 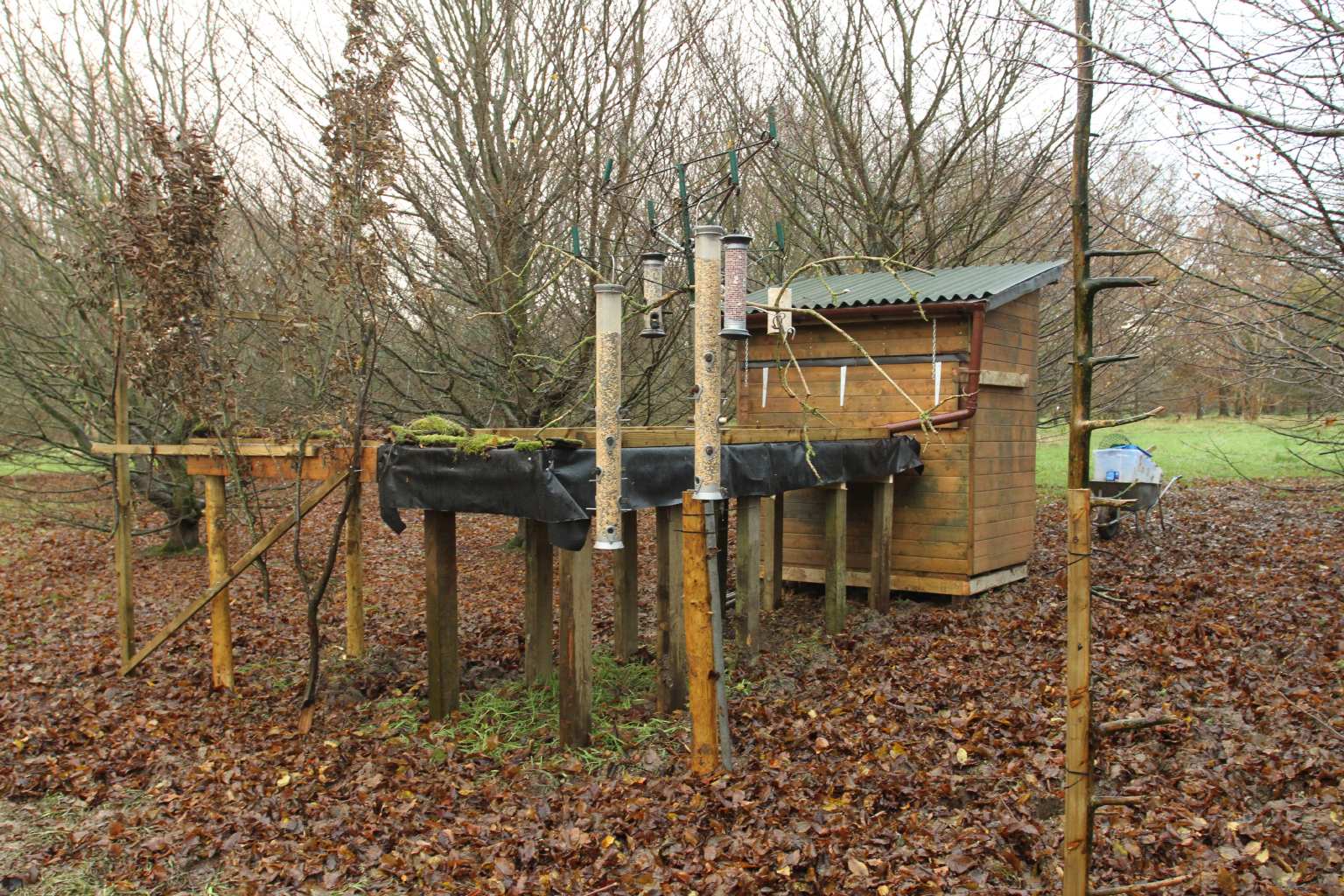 By the end of November everything was in situ. I scattered a mixture of seeds on the ground near the hide, including some extremely expensive hornbeam seeds I had bought online. A flock of Chaffinches and Greenfinches quickly found the food, and so did Eurasian Nuthatches and a variety of tits. But it was some time before any Hawfinches appeared.

Then one rainy morning I thought I heard that distinctive, high-pitched tic – a call that seems out of character for such a bulky, powerful bird. Before long there was a flash of black-and-white wings, and a Hawfinch landed in the leaf litter alongside the other finches. It wasn’t until I saw it next to its smaller cousins that I really appreciated how big this species is. It is twice the size of a Greenfinch and has a huge head to accommodate its mighty jaw muscles, making it look top heavy. 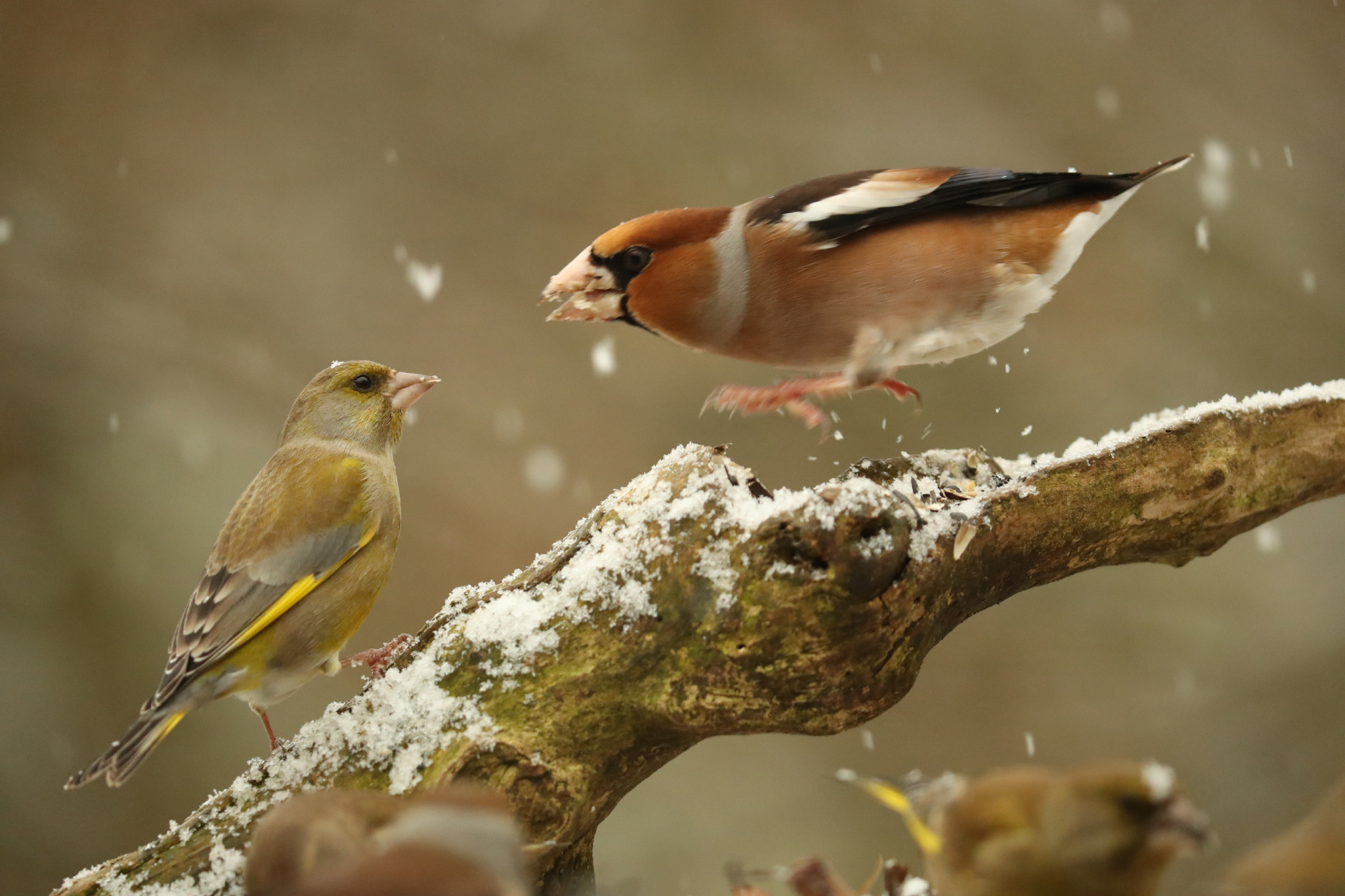 The first Hawfinch to land on Robert's bird table really hit home just how large the species is compared to our commoner finches.

Before long two more Hawfinches appeared. I noticed the third bird was eating sunflower seeds – so much for the £35 per kilo hornbeam seed I had bought! Now that the birds had found my food supply, I needed to persuade them to feed from the table I had built.

As I was driving home that evening I noticed a line of yew trees at the side of the road. Hawfinches can crack open yew stones and eat the seeds inside. Just three of these yew seeds would kill a human, and other birds only ever ingest them and then eject them whole.

I filled two wheelbarrows with the sweepings off the path the following day. I sifted out the stones, dried them out on my boiler and then piled the Hawfinch table high, along with more hornbeam seeds, rowan berries and sunflower seeds.

Then one day in mid-December, a male Hawfinch landed on the edge of the pool I had built. It was very wary and within seconds was gone. I decided to minimise any changes to my hide by leaving the shutters open all the time. I also made some false camera lenses out of plant pots with camo covers on, just like my real ones. I even placed a piece of black Perspex on one end to mimic the glass of a real lens, and left these poking out of the hide. 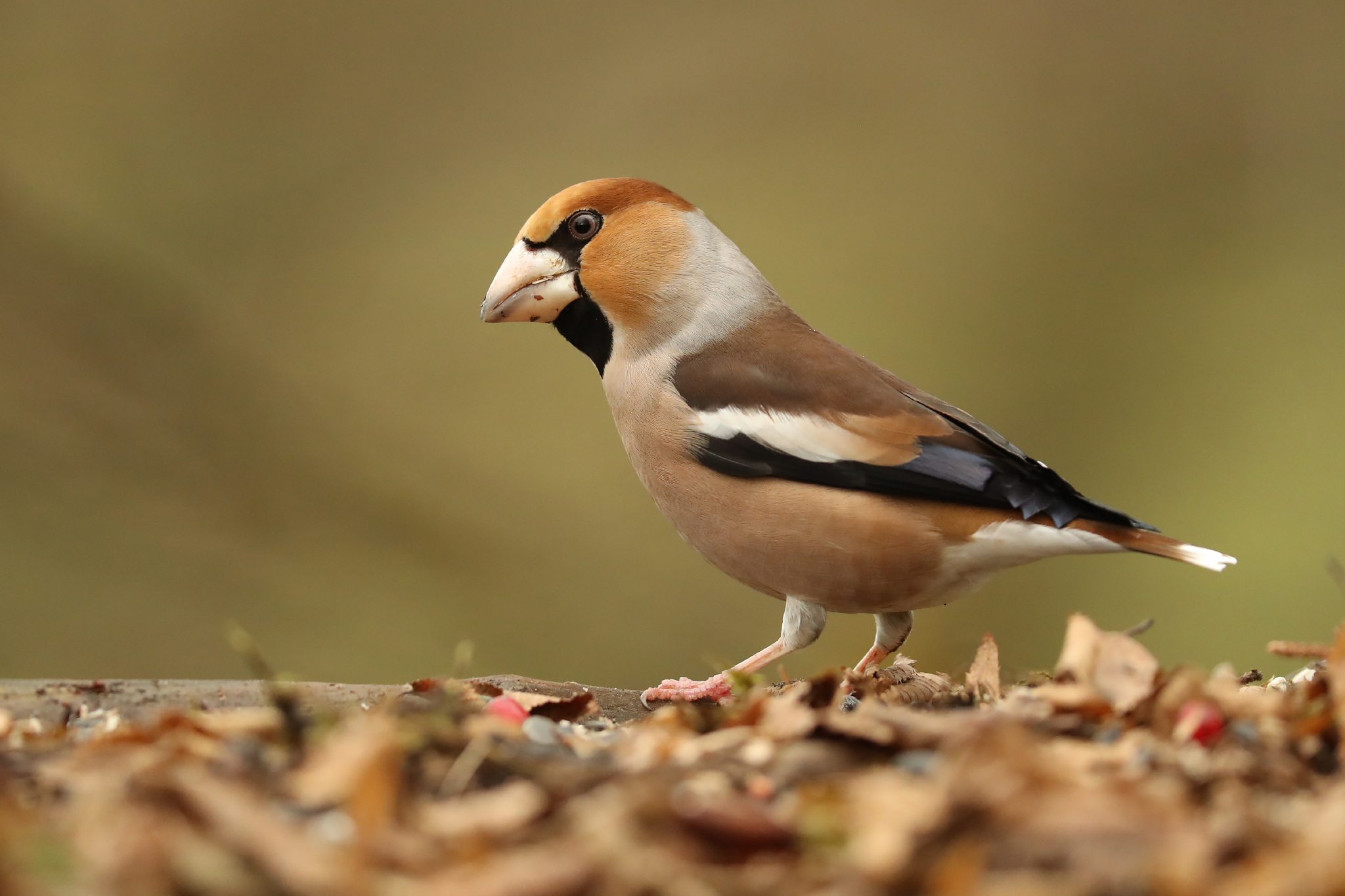 A male Hawfinch poses on the edge of Robert's bird table. 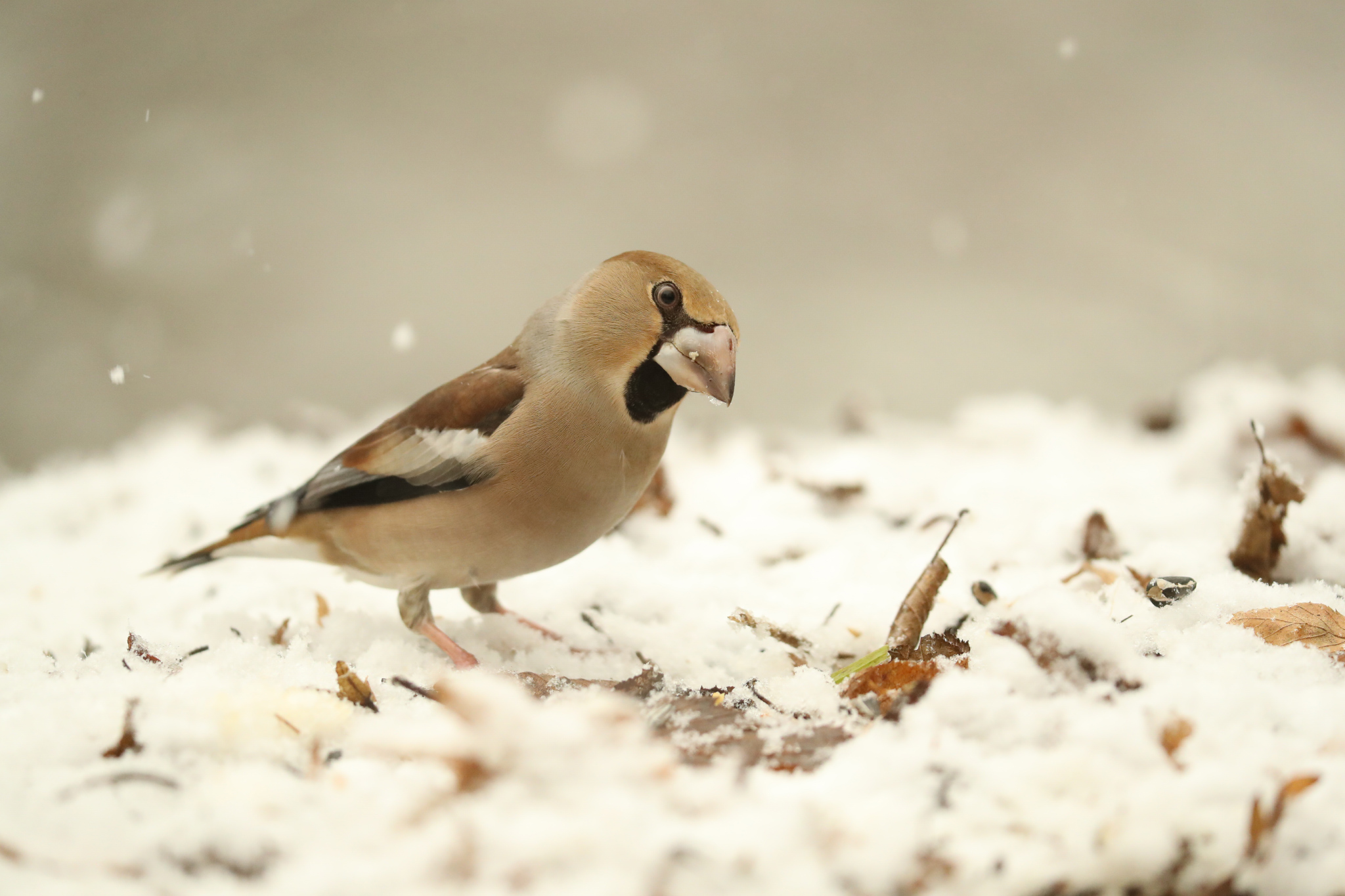 There was never a dull moment, and plenty of other species to watch as well as the Hawfinches – I succeeded in attracting a huge variety of woodland birds including woodpeckers, Long-tailed, Blue, Great, Coal and Willow Tits, Eurasian Nuthatch, Goldfinch, Chaffinch, Greenfinch, Eurasian Siskin, Brambling and Fieldfare.

It just goes to show how important a varied habitat is – the arboretum is home to more than 1,600 different tree species. Without places like this I would not have been able to watch Hawfinches up close.

Hawfinches can still be seen at Yorkshire Arboretum at the time of publishing. If you do visit, I have mounted a small exhibition of my photographs, video footage and a new painting inspired by my experience, which runs until 17 March, or visit my gallery in Thixendale, which is open daily. See www.robertefuller.com for more information. 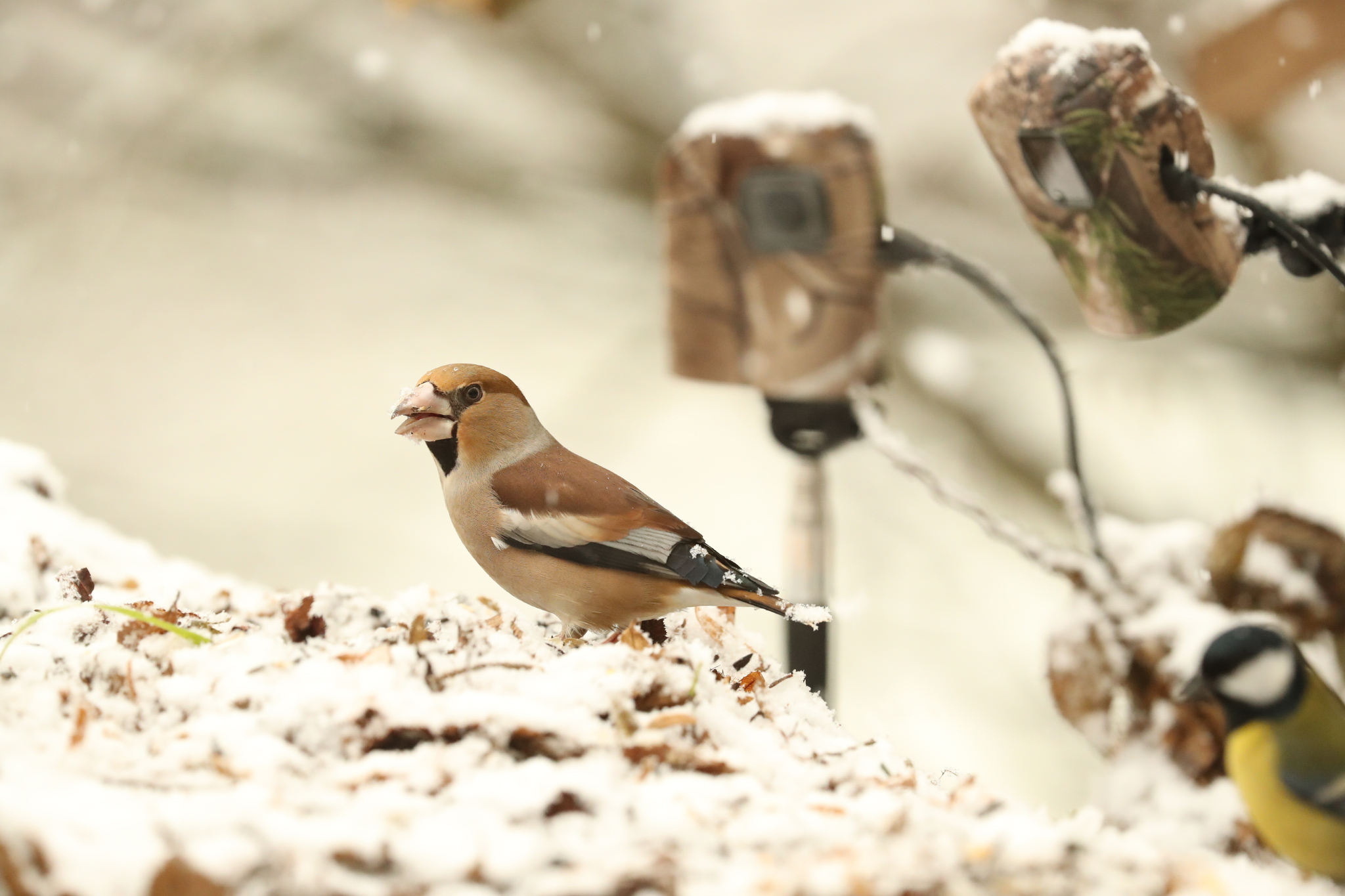 A female Hawfinch feeds under the supervision of Robert's GoPro set-up.