Phalaropes are curious and distinctive members of the wader tribe. They are almost always seen on water and are noted for their lobed toes, characteristic 'spinning' behaviour and 'reversed' plumage and breeding biology: the dull-coloured males undertake most of the parental duties.

These are charismatic birds, hyperactive and – especially the females – brightly plumaged. All three phalarope species occur in Britain, but none are common and an encounter with any of them is always a treat. 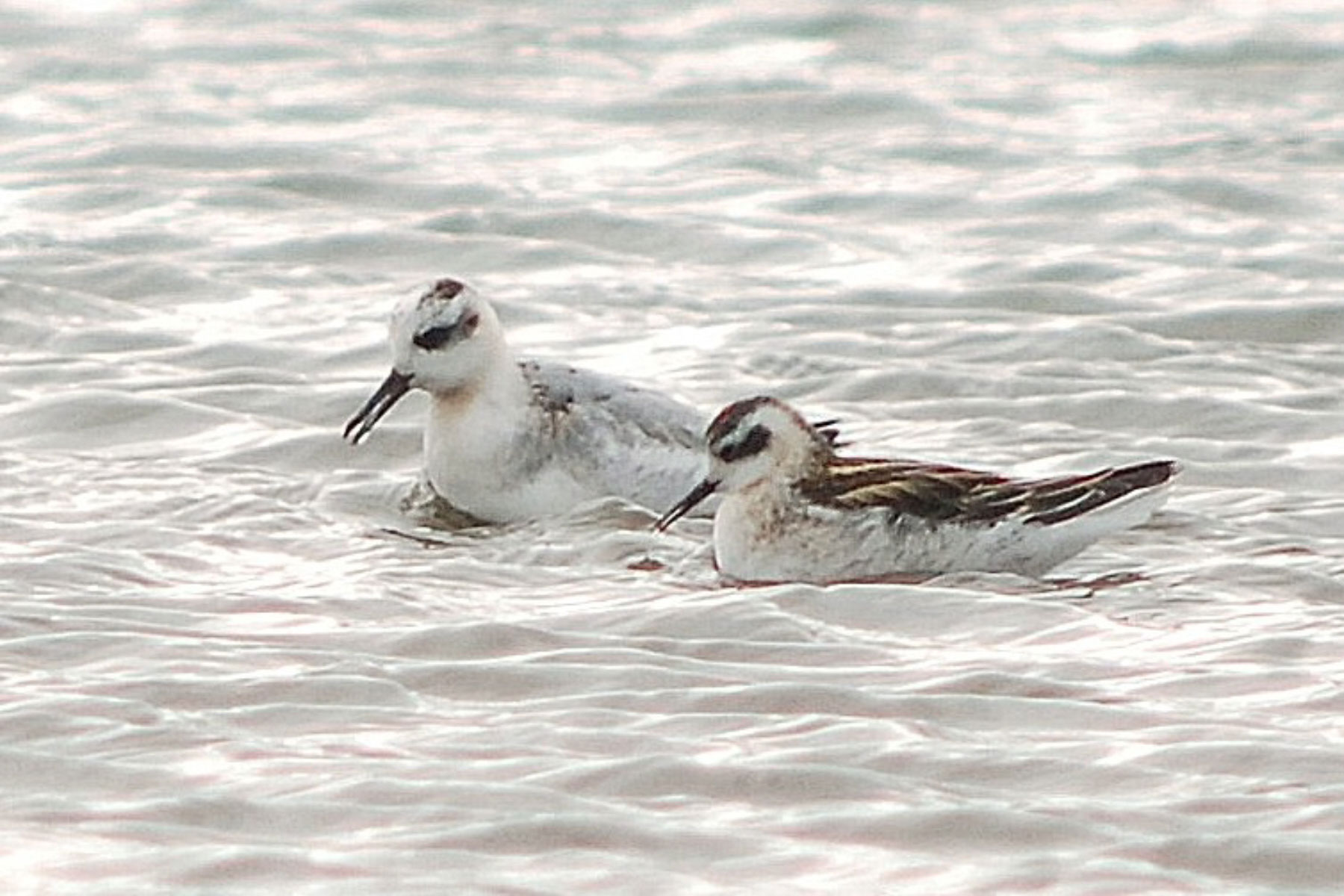 This species has a circumpolar distribution. A long-distance migrant, it breeds in Arctic bogs and winters at sea in the tropics, often travelling overland. Red-necked and Grey Phalaropes are the only pelagic waders. Russian breeders winter in the south-west Pacific, North American birds off Peru, and European birds mainly in the Arabian Sea.

In Europe, most breed in Scandinavia and Iceland, but a very few pairs can be found in Britain in the Northern Isles and Outer Hebrides. These were thought to winter off Arabia, but recent satellite-tagging studies have shown that at least some cross Central America to reach the Pacific. Away from northern Scotland, this species is encountered in Britain only as a scarce passage migrant at mainly coastal wetland sites in late spring and early to mid-autumn.

This is the smallest and most delicate of the phalaropes, with a small-headed appearance, short legs and a medium-length and noticeably fine, needle-like black bill. The female in breeding plumage is stunning: ash-grey above with straw-coloured mantle and scapular 'braces', a white throat and white patch above the eye and, most eyecatchingly, a bright red area on the neck-sides and upper throat. The male is similarly patterned but the colours are much duller.

In first-winter and adult winter plumage (the latter rarely seen in Britain) it is grey above and white below, with a dark hindcrown and a dark patch leading back from the eye. The more frequently encountered juveniles are darker above, with buffy feather fringes and sometimes a peachy wash on the foreneck.

In flight, this species shows a strong white wing-bar, closely resembling a small calidrid sandpiper, and it could easily be passed off as such on a brief view. Note, however, the very fine bill, and the real giveaway, a landing on water.

This species has a near-circumpolar range, but is absent as a breeding bird in Europe away from Iceland and Svalbard. It is more of a High Arctic species than Red-necked Phalarope and, though the two can be found together, it tends to breed in more northerly regions. It is also a long-distance migrant, travelling straight out to sea – not overland – to winter in the Pacific off Chile and in the Atlantic off western and southern Africa.

In Britain it is encountered almost exclusively as a mid- to late-autumn migrant, most often at sea in the west, but it also occurs as a storm-blown visitor to coastal and even inland waters anywhere. As a result, this species is incredibly rare in Britain in breeding plumage.

This is a slightly larger and stockier species than Red-necked Phalarope, but it shares the latter's small-headed appearance, short legs and medium-length bill. It appears less frail and delicate, however, and differs most obviously in its stouter, more tubular bill, which can show some yellow in the base.

The breeding plumage of the female (from which the American name 'Red Phalarope' derives) is spectacular: a deep reddish lower face and underparts, dark upperparts with prominent straw feather fringes, and a contrasting white patch around the eye and across the ear coverts. In this plumage the bill is largely rich yellow. As in Red-necked Phalarope, the male is similarly marked but much duller.

Juveniles are strongly patterned above like Red-necked Phalaropes, but the moult to first-winter plumage begins early and by the time they are seen in Britain most have acquired pale grey mantles and scapulars and so more closely resemble the grey-and-white winter adults. With dark in the hindcrown and a dark patch behind the eye, the face pattern recalls its smaller sibling, while it can look like a small Little Gull when swimming.

In flight this species' grey-and-white appearance and strong white wing-bar most recall Sanderling, but the tubby-bodied, 'head-up' profile and slightly rocking flight action are rather different. A landing on water will settle the identity of even the most distant bird.

This species is restricted to the Americas. Unlike its cousins it is not an Arctic breeder, nesting instead inland in 'prairie pothole' country in south-west Canada and the north-western United States. Nor is it pelagic in winter, migrating overland to wetlands in southern South America. A long-distance migrant, it is prone to vagrancy and is a regular (though decreasing) rarity in Britain with almost 250 records, mostly in mid-autumn.

The summer female has a pale grey crown and upperparts, a dark area leading back from the lores through the eye, down the neck-sides and extending into chestnut areas on the mantle sides and lower scapulars, and a peach-coloured foreneck. The male is correspondingly duller. In breeding plumage both sexes have black legs.

Non-breeding birds have typical phalarope head patterns, juveniles showing dark brown feather centres with pale fringes above. These feathers are moulted early, however, so that vagrants to Britain are typically in a more grey-and-white plumage, the only colour provided by the bright yellow legs.

In flight this species looks pale and slender, with no upperwing bar, a square white rump patch with no extension of white up the back, and feet which project beyond the tail tip. It is therefore superficially similar to Lesser Yellowlegs. 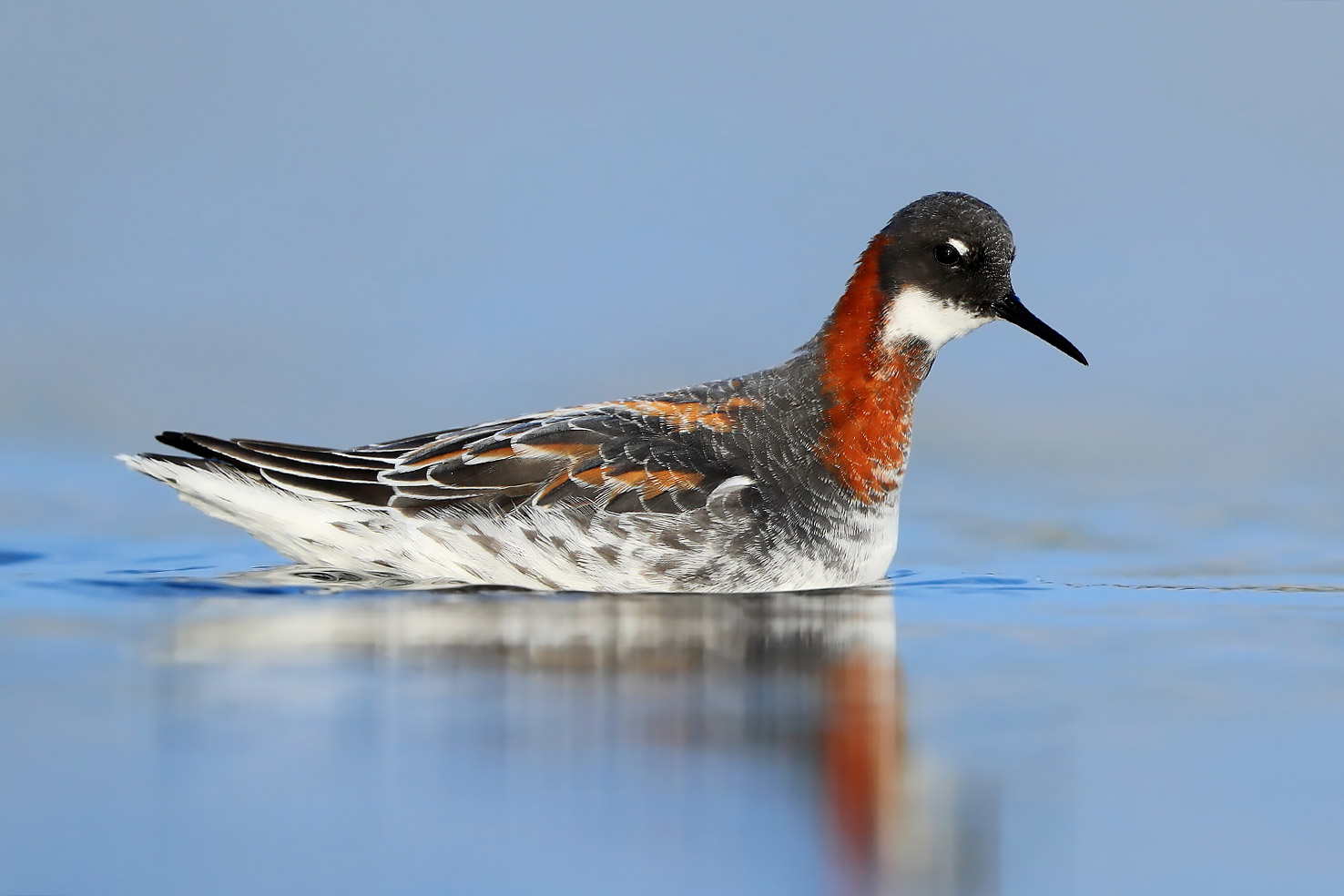 Female Red-necked Phalarope (Hyères, France, 29 April 2018). An adult female Red-necked Phalarope in summer plumage is beautiful and unmistakable; fortunately it is possible to see the species in this plumage in Britain. The red neck-sides and foreneck are striking, but in dull light or at long range the gleaming white throat can catch the eye just as readily (Aurélien Audevard). 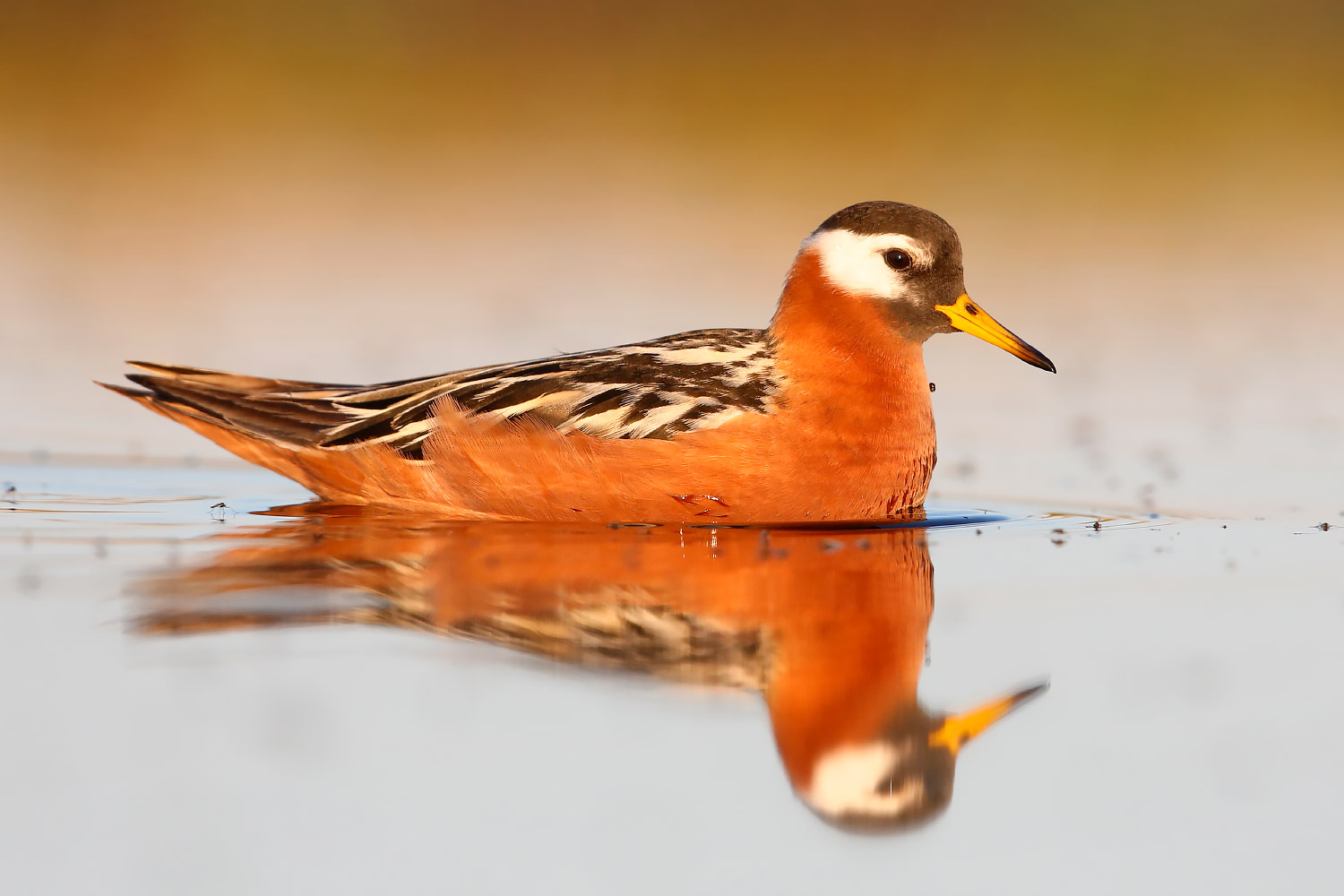 Female Grey Phalarope (Alaska, USA, 21 June 2015). Adult female Grey Phalarope in summer plumage is perhaps the most beautiful of all phalaropes, but is sadly near-impossible to see without a trip to the High Arctic. The red neck and underparts are most striking, but the face pattern is eyecatching too, while the upperparts are beautifully marked with whitish feather fringes. Note that, unlike the other two species, the bill is largely yellow in this plumage (Chris van Rijswijk/www.agami.nl). 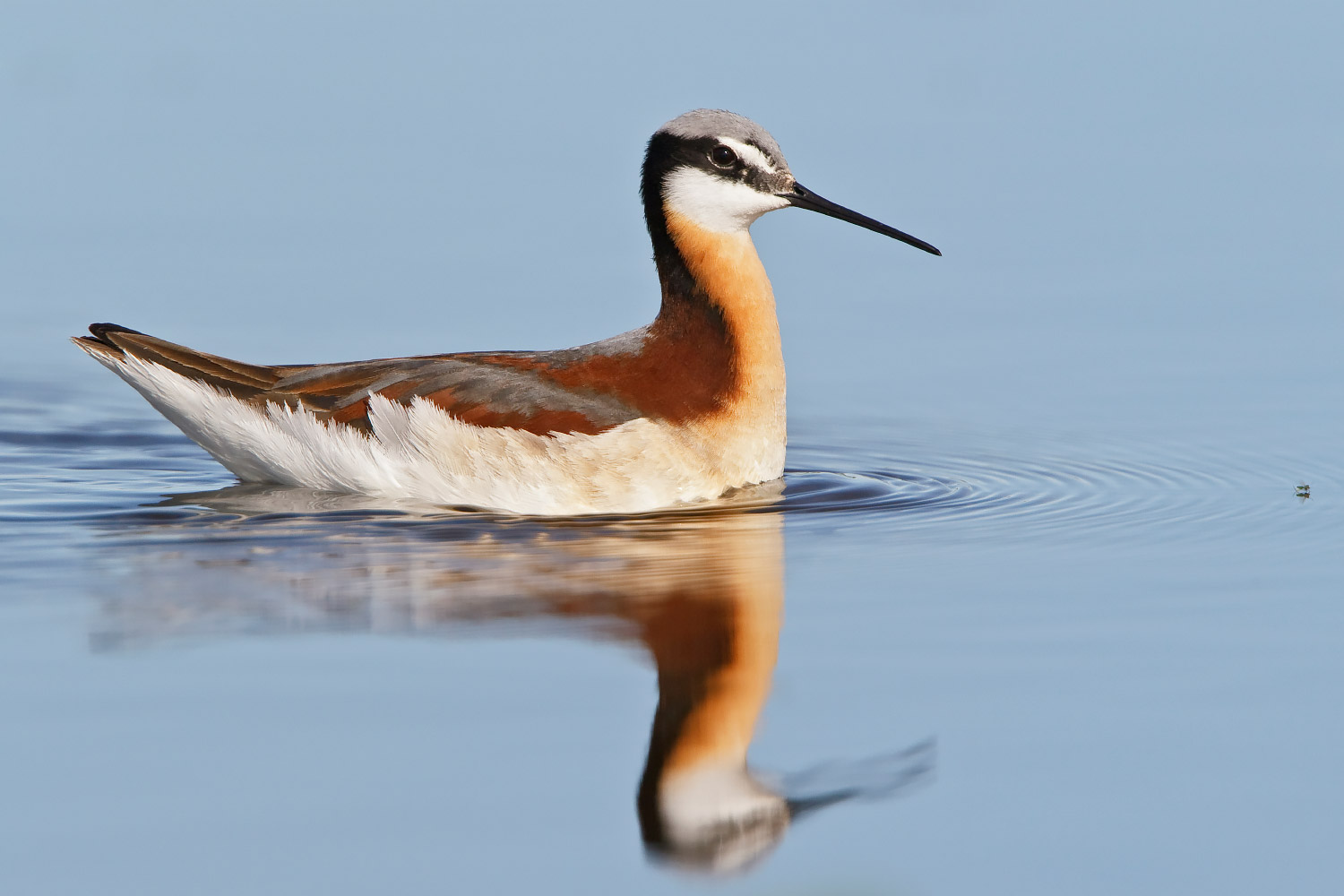 Female Wilson's Phalarope (Alberta, Canada, 23 May 2009). Adult female Wilson's Phalarope in summer plumage is also gorgeous. It most resembles a large, long-billed Red-necked, but the plumage detail differs. Note the black through the eye and on the hindneck, the maroon in the upperparts and the peachy wash to the breast. Birds looking like this occur occasionally in Britain, but they are very much in the minority (Glenn Bartley/www.agami.nl). 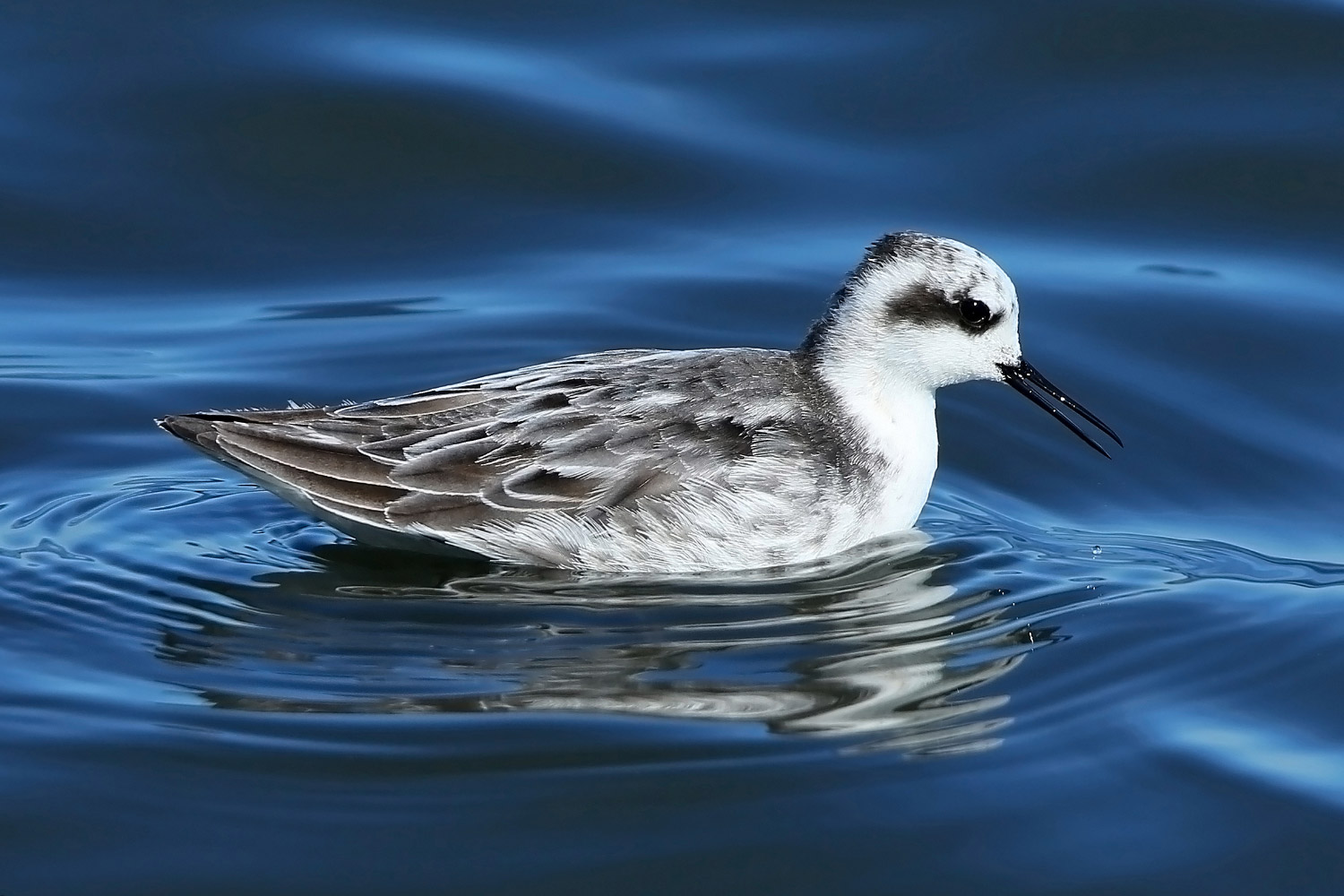 Winter Red-necked Phalarope (Hyères, France, 30 March 2015). This winter-plumaged bird (rarely seen in Britain) is essentially grey above and white below, with a dark hindcrown and a dark patch leading back from the eye. It therefore very much resembles Grey Phalarope and needs to be identified on structural features. Note here the rather delicate appearance and fine, almost needle-like bill (Aurélien Audevard). 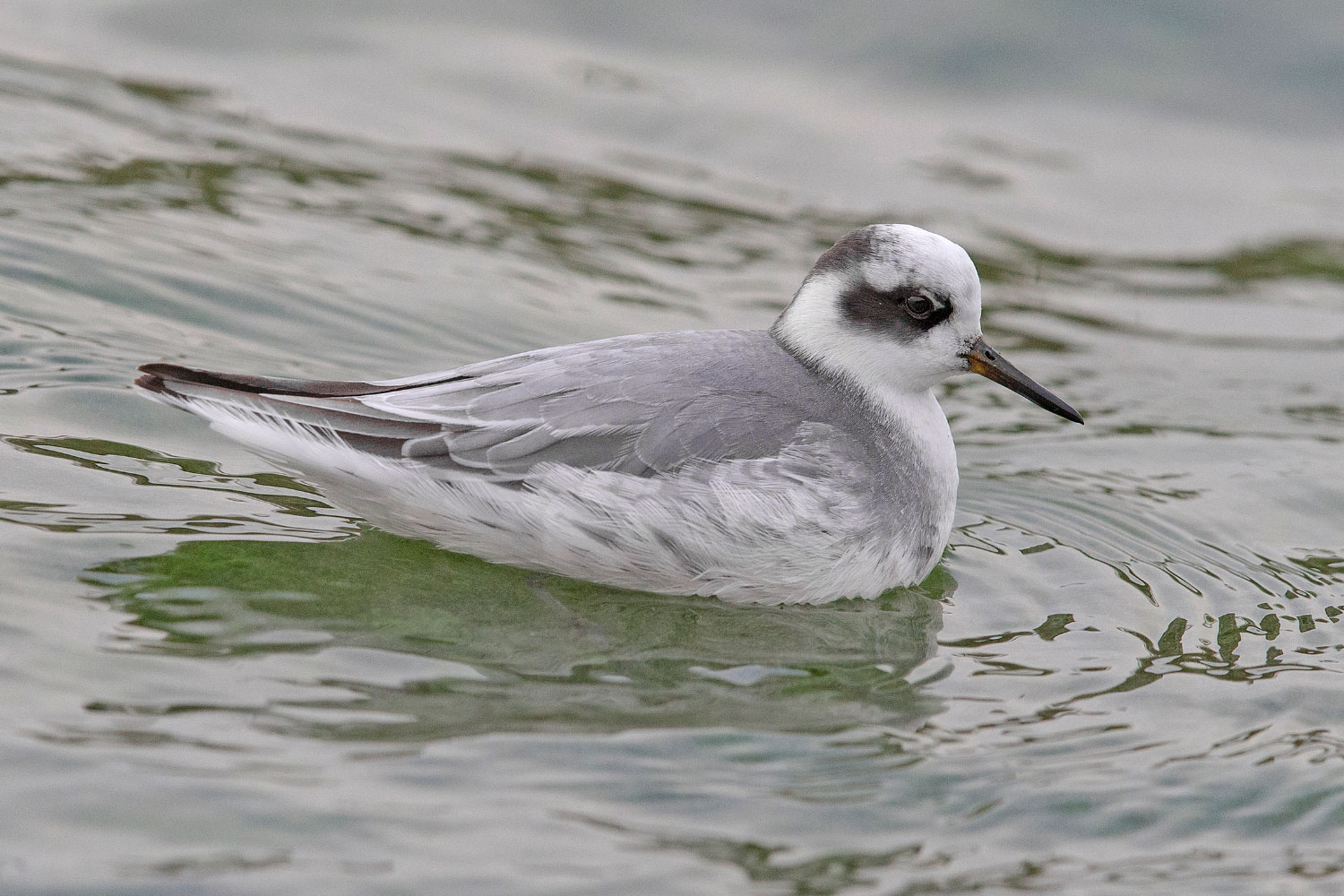 Winter Grey Phalarope (Farmoor Reservoir, Oxfordshire, 26 November 2015). This winter adult Grey Phalarope is also basically grey and white and closely resembles the Red-necked Phalarope in the preceding image. Note, however, the slightly larger, longer-looking body and, most importantly, the slightly thicker, more tubular bill, which has some yellow hues just visible in the base (Andrew Moon). 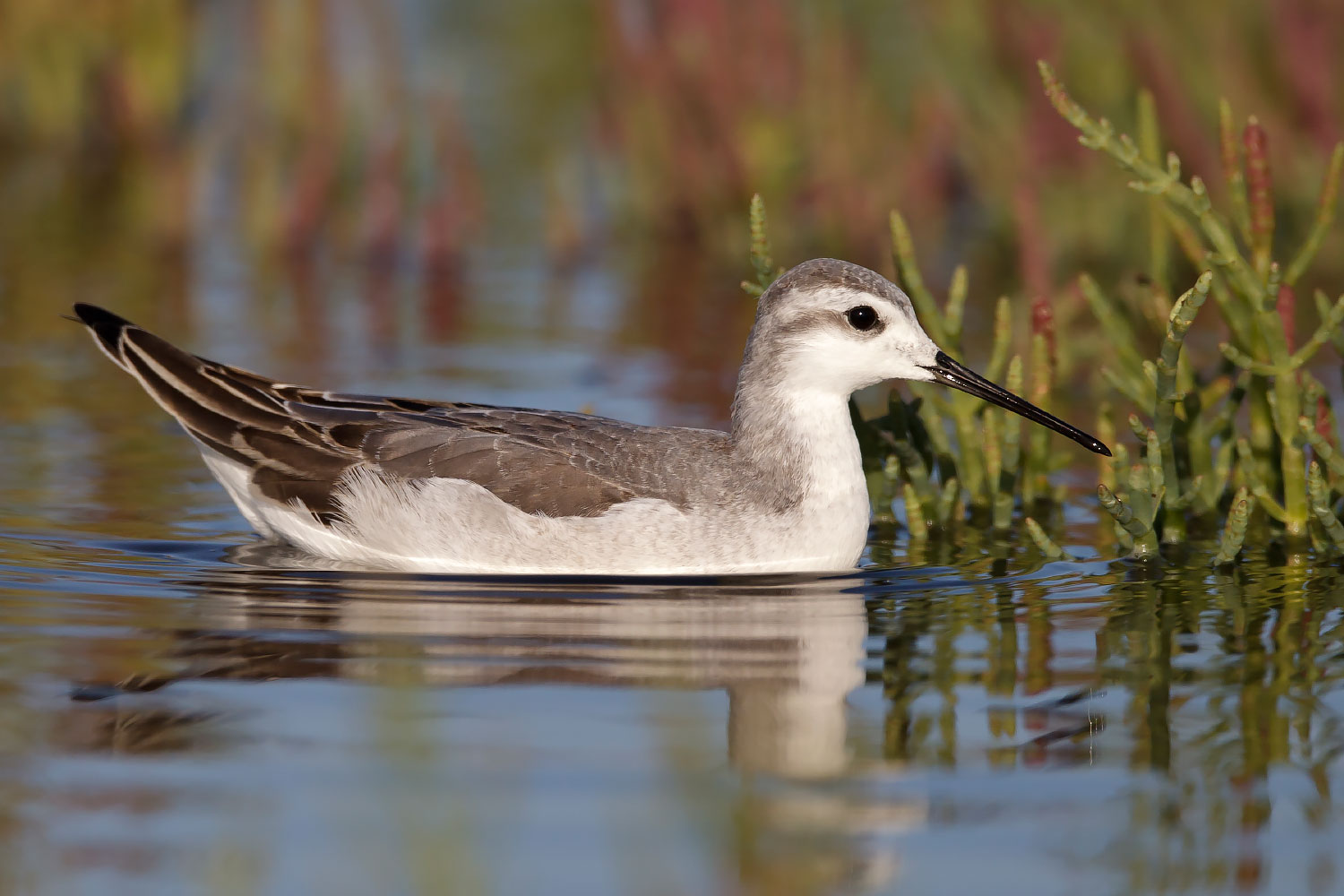 Winter Wilson's Phalarope (California, USA, 8 September 2011). Winter-plumaged Wilson's Phalarope is also grey and white but, lacking the dark head markings, appears plainer than the other two species. The clincher, however, is structure. Note the larger size – which should be readily apparent in the field – longer neck and very long, fine, all-dark bill (Brian E Small/www.agami.nl). 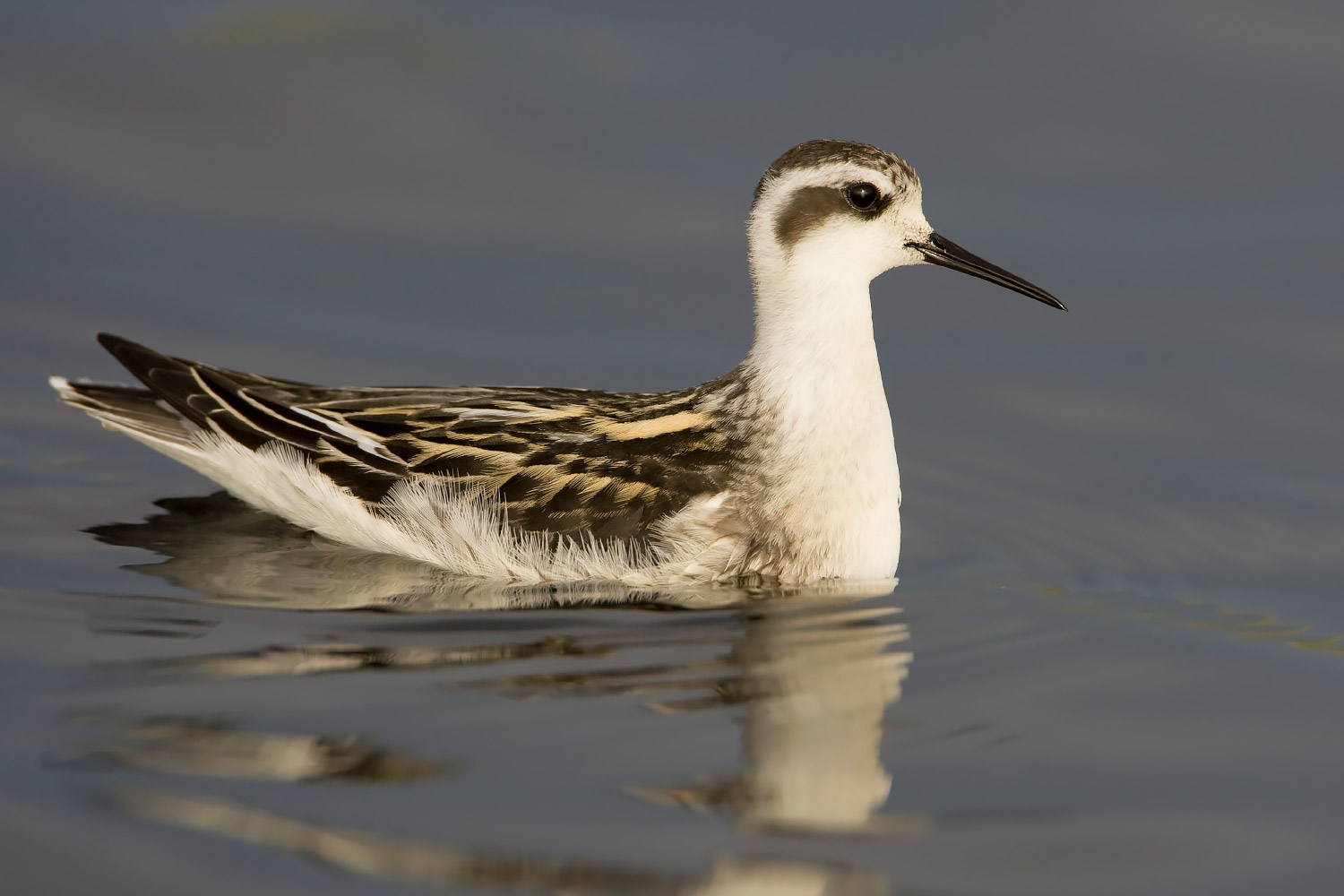 Juvenile Red-necked Phalarope (Terschelling, The Netherlands, 11 September 2008). With its dark brown upperparts and neat buffy feather fringes, this phalarope is in full juvenile plumage. The small-looking slim body and the medium-length, very fine, needle-like bill identify it as a juvenile Red-necked Phalarope. This is the typical plumage of early autumn birds in Britain (Arie Ouwerkerk/www.agami.nl). 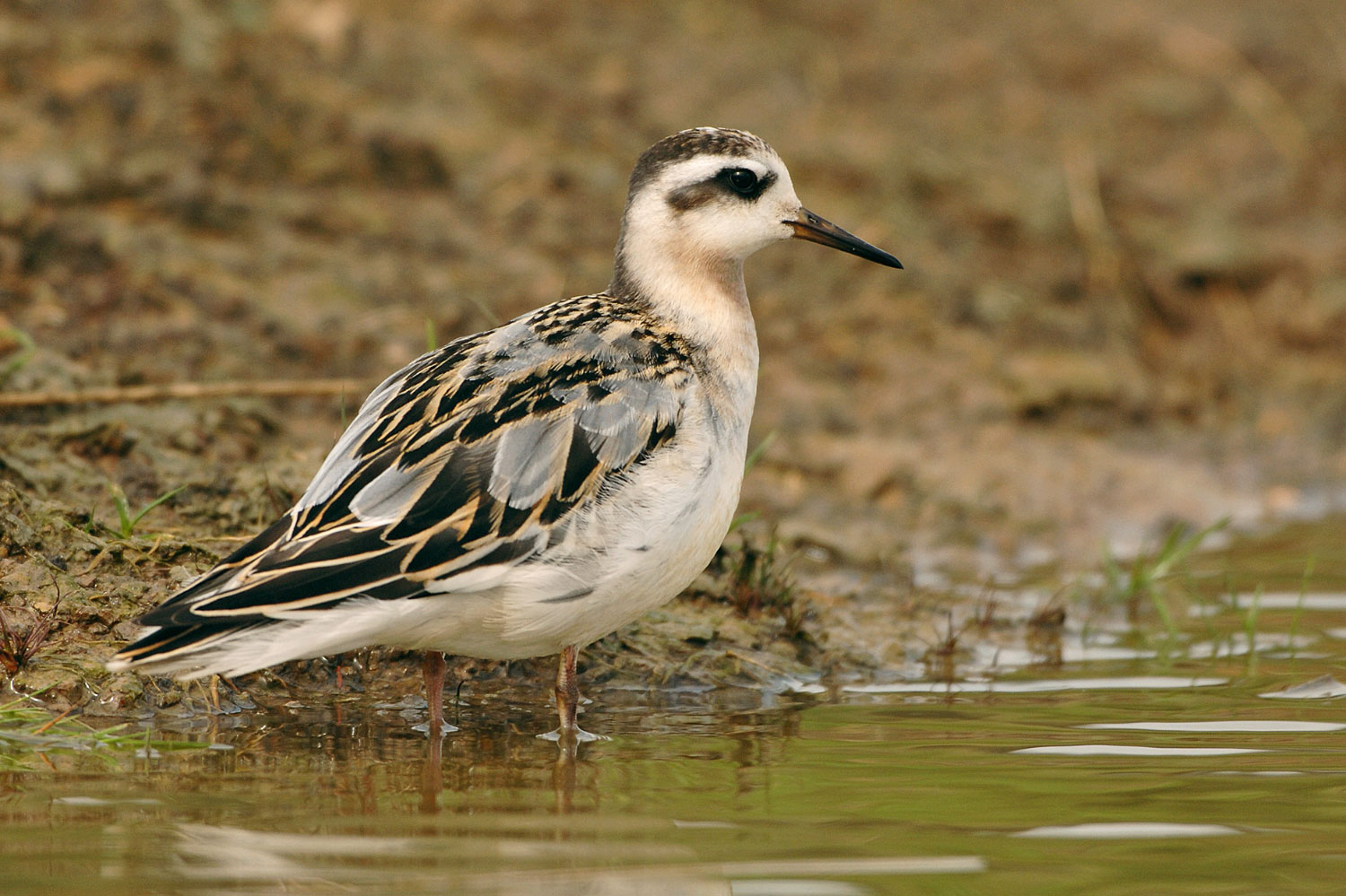 Juvenile Grey Phalarope (Newton, Lancashire, 27 August 2005). This young bird is still essentially dark above, with neat pale fringes to blackish juvenile feathers. However, the presence of scattered pale grey feathers in the mantle and scapulars shows that the moult to the grey-and-white first-winter plumage is already underway. Note also the relatively stout bill with yellow in the base (Steve Young/www.birdsonfilm.com). 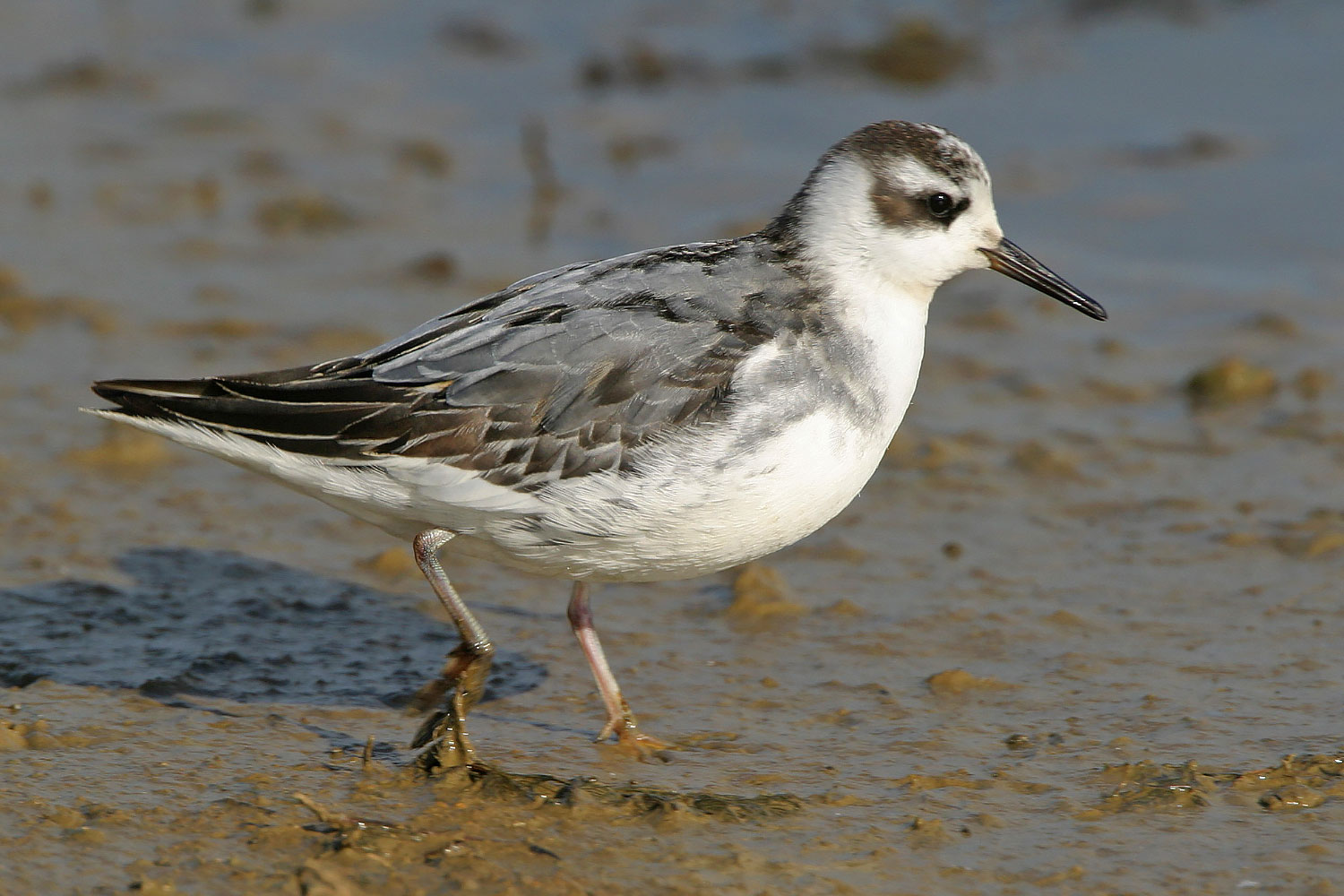 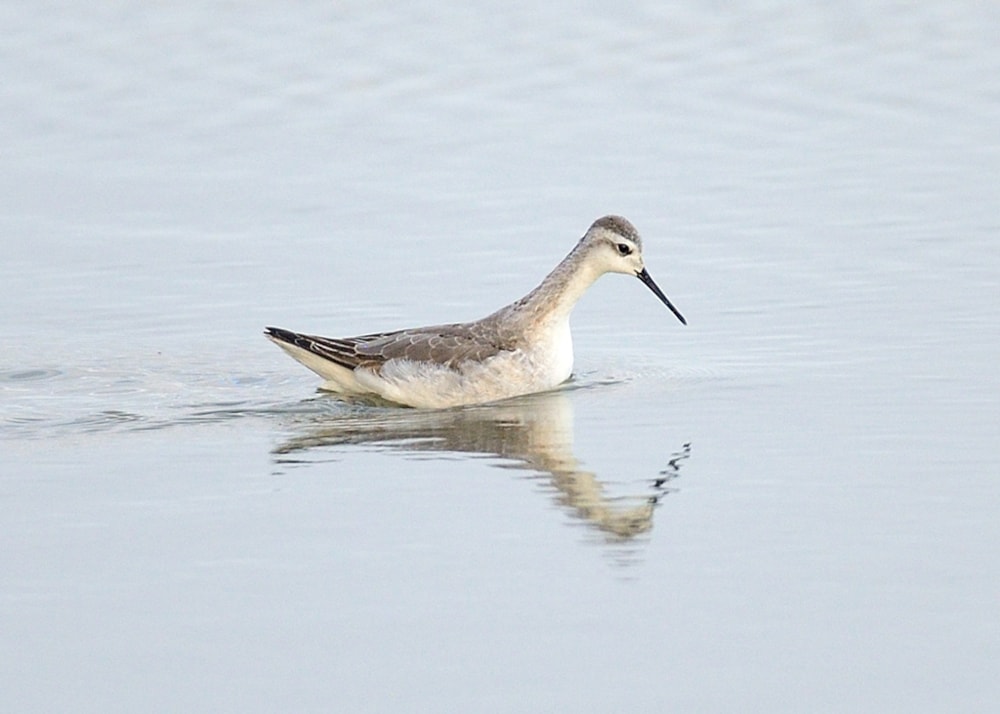 First-winter Wilson's Phalarope (Oare Marshes, Kent, 14 October 2017). This Wilson’s Phalarope has already moulted its mantle and scapulars into the pale grey of first-winter plumage, but the wing coverts and tertials are still juvenile. The typical slender proportions, long, fine bill and wading habit are all visible here, too (Ian Curran). 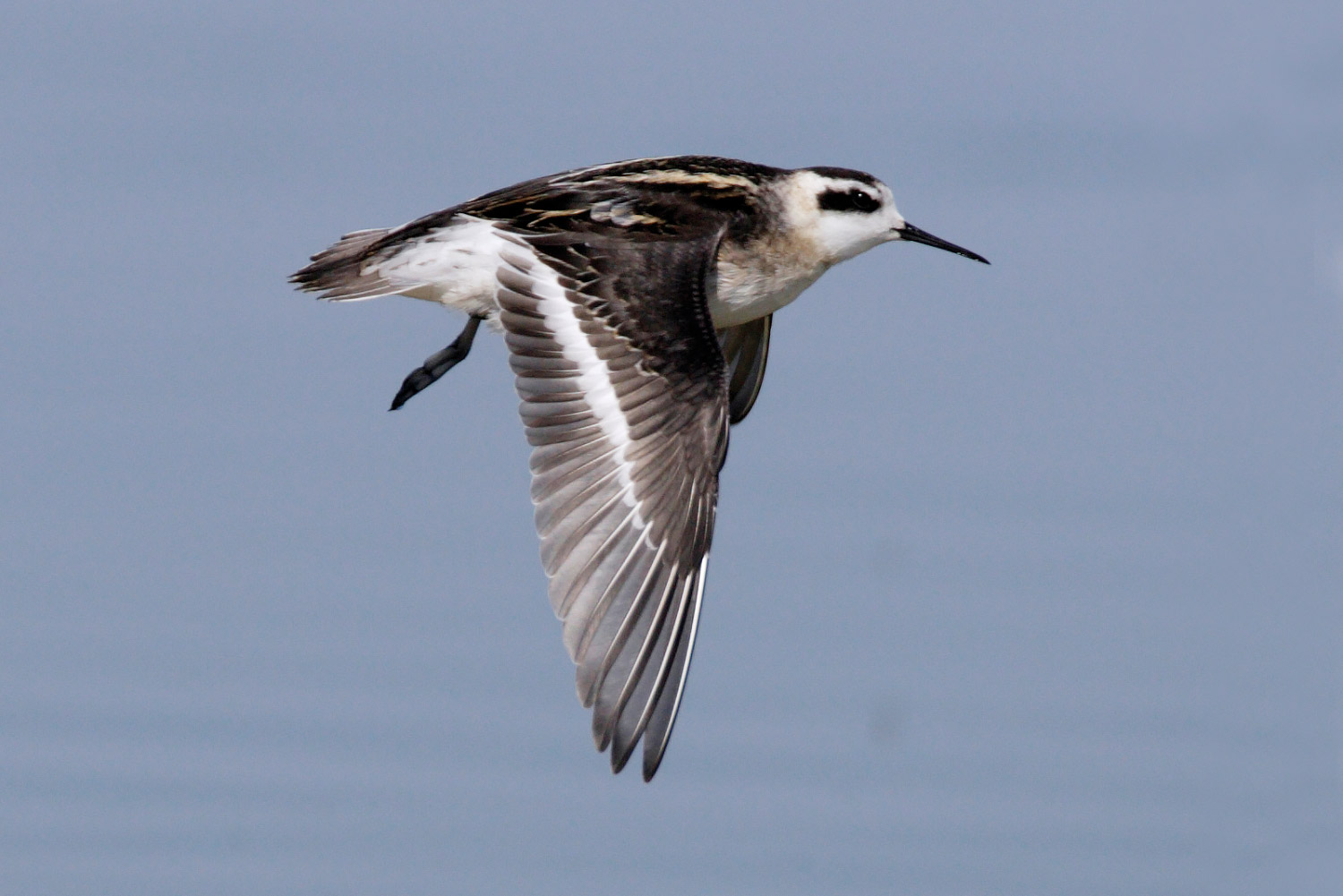 Juvenile Red-necked Phalarope (California, USA, 6 August 2006). Flying Red-necked and Grey Phalaropes both look tubby bodied and small headed, but Red-necks look particularly small and might be taken for a small calidrid sandpiper. The overall very dark appearance means that the bird is in full juvenile plumage, while the broad white wing-bar is common to both species. The excellent view afforded in this image shows the rather delicate appearance and typical short, needle-like, all-dark bill of a Red-necked Phalarope (Mike Danzenbaker/www.agami.nl). 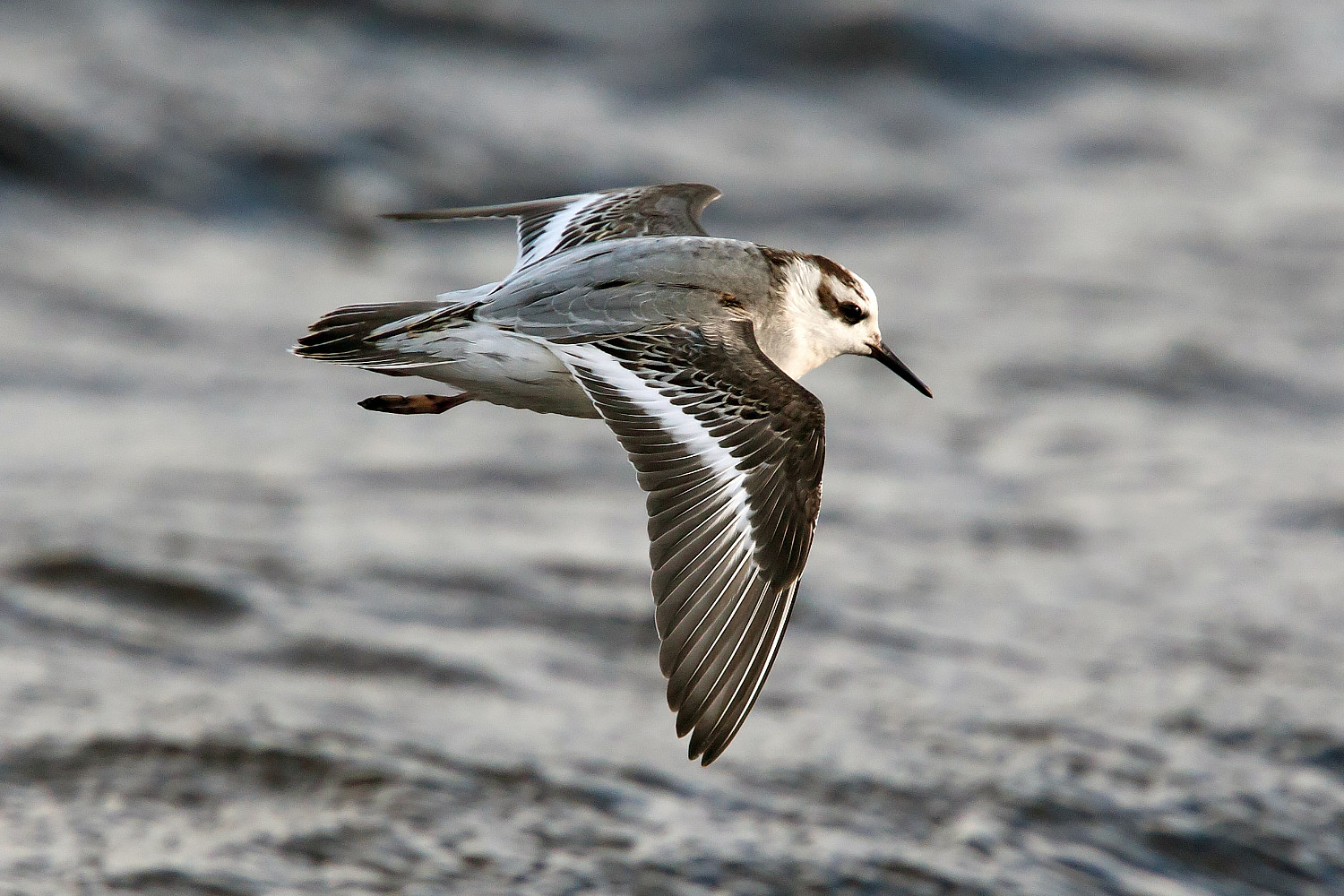 First-winter Grey Phalarope (Shetland, 26 October 2008). The tubby body and small head are obvious here, too, but this bird can be identified as a Grey Phalarope by its rather more ‘solid’ appearance and its superficial resemblance to a Sanderling. The combination of grey mantle and scapulars with residual blacker feathering and dark, pale-fringed wing coverts age this bird as a first-winter (Hugh Harro /www.agami.nl). 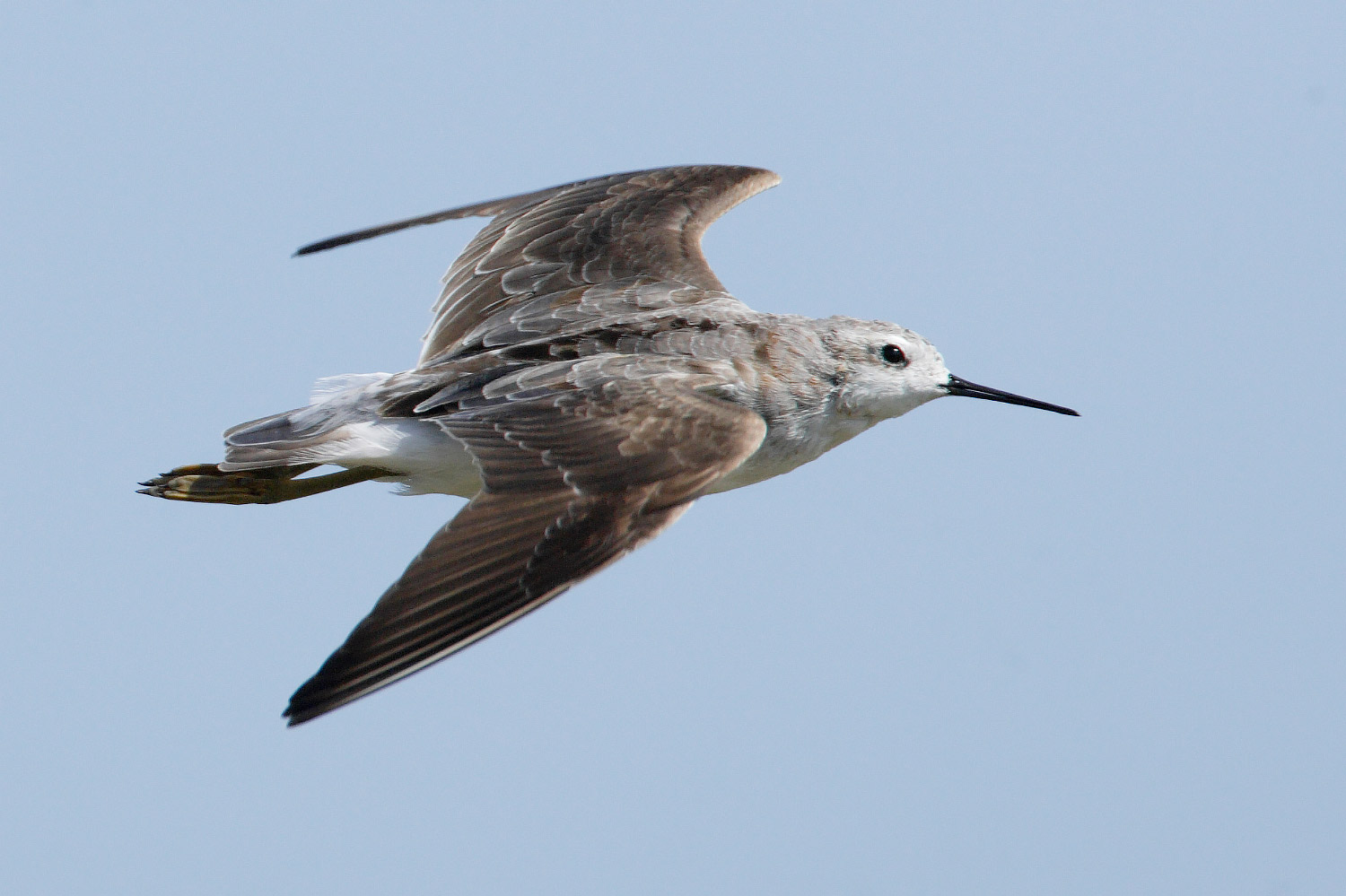 Adult Wilson's Phalarope (California, USA, August 2006). Flying Wilson’s Phalaropes look very different from their smaller cousins. As well as being larger and longer with a long bill, the upperwing is plain, lacking any obvious wing-bar; the rump is whitish (and doesn't extend up the back) and the legs are long and yellow, here clearly projecting beyond the tail. In life, a flying Wilson's is more likely to be mistaken for a Tringa sandpiper than either of the smaller phalaropes (Mike Danzenbaker/www.agami.nl). 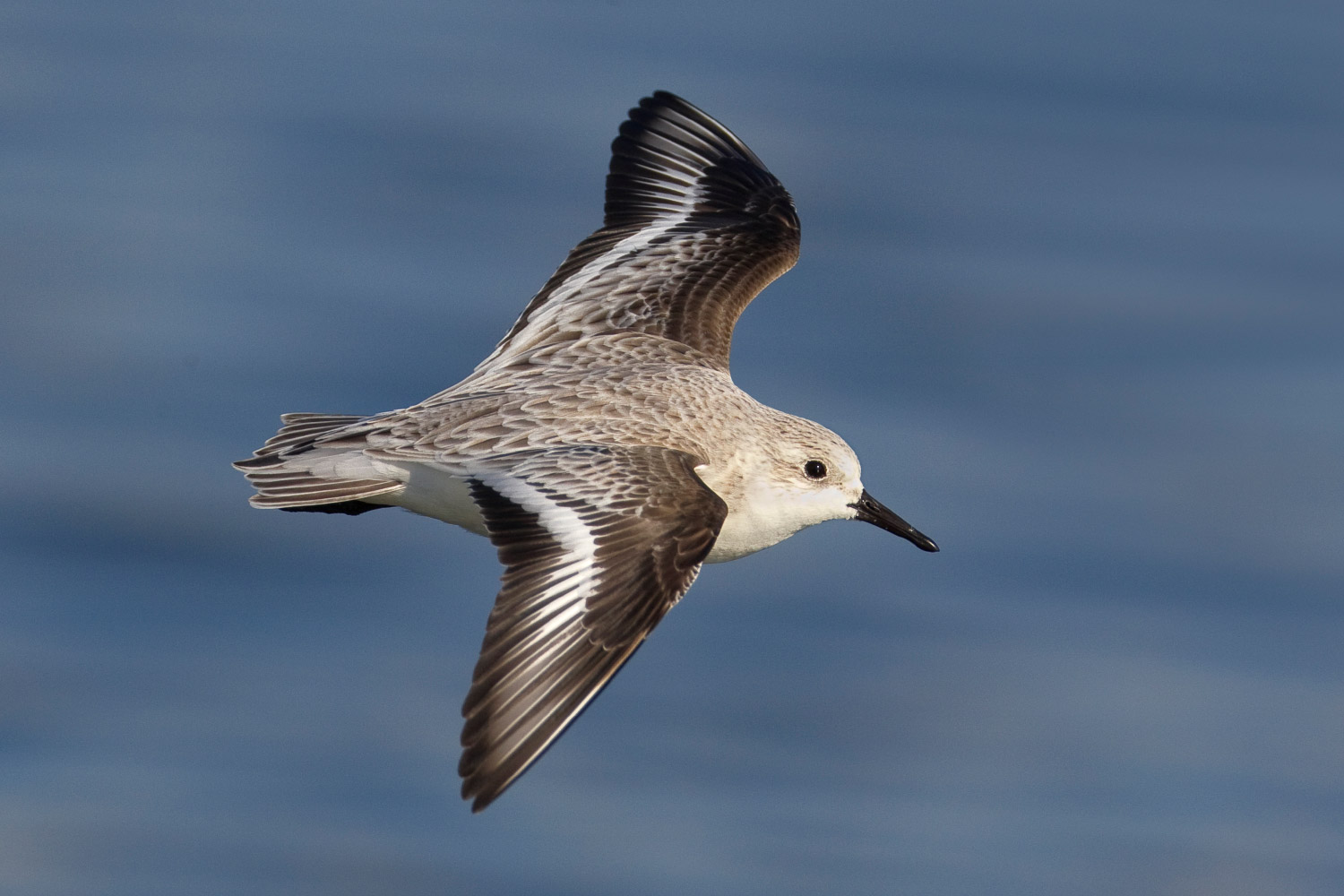 Adult Sanderling (Tuscany, Italy, 31 January 2010). With its pale grey upperparts and broad white wing-bar, this bird closely resembles a first-winter or adult Grey Phalarope. However, it is a winter Sanderling – the classic Grey Phalarope 'pitfall species'. Note the clean white head with no trace of the dark cap and ear covert markings of the phalarope. At range, the two species can be hard to separate, but look for the tubby-bodied and small-headed look of the phalarope, as well as its distinctive ‘rocking’ flight action and habit of landing on water (Daniele Occhiato/www.agami.nl).