A new species of antbird, originally discovered in in northern Peru in 2016, has now been formally described.

As its proposed English name suggests, Cordillera Azul Antbird Myrmoderus eowilsoni is found in the Cordillera Azul mountain range in the San Martín region of northern Peru, the same range that also recently produced a newly described manakin species. It was discovered in the reasonably accessible western part of the range, near the coffee-growing town of Flor de Café in July 2016 by Josh Beck.

Having obtained sound recordings of a strange, ground-walking antbird observed on 9 July last year, Beck, along with four other birders, soon realised that it was a species new to science. Since then, much more has been learnt about the antbird – most notably that its closest relative is Ferruginous-backed Antbird, of which the nearest population is found in lowland Amazonian rainforests of the Guiana Shield and Madeira-Tapajós, some 950 miles to the east in Brazil.

Myrmoderus eowilsoni has been named in honour of Dr Edward Osborne Wilson to recognise his devotion to conservation and his patronage of the Rainforest Trust, which strives to protect the most imperiled species and habitats in the Neotropics and across the globe. The English name was chosen to draw attention to the little known but biogeographically important and biodiverse mountain range that holds the new species. 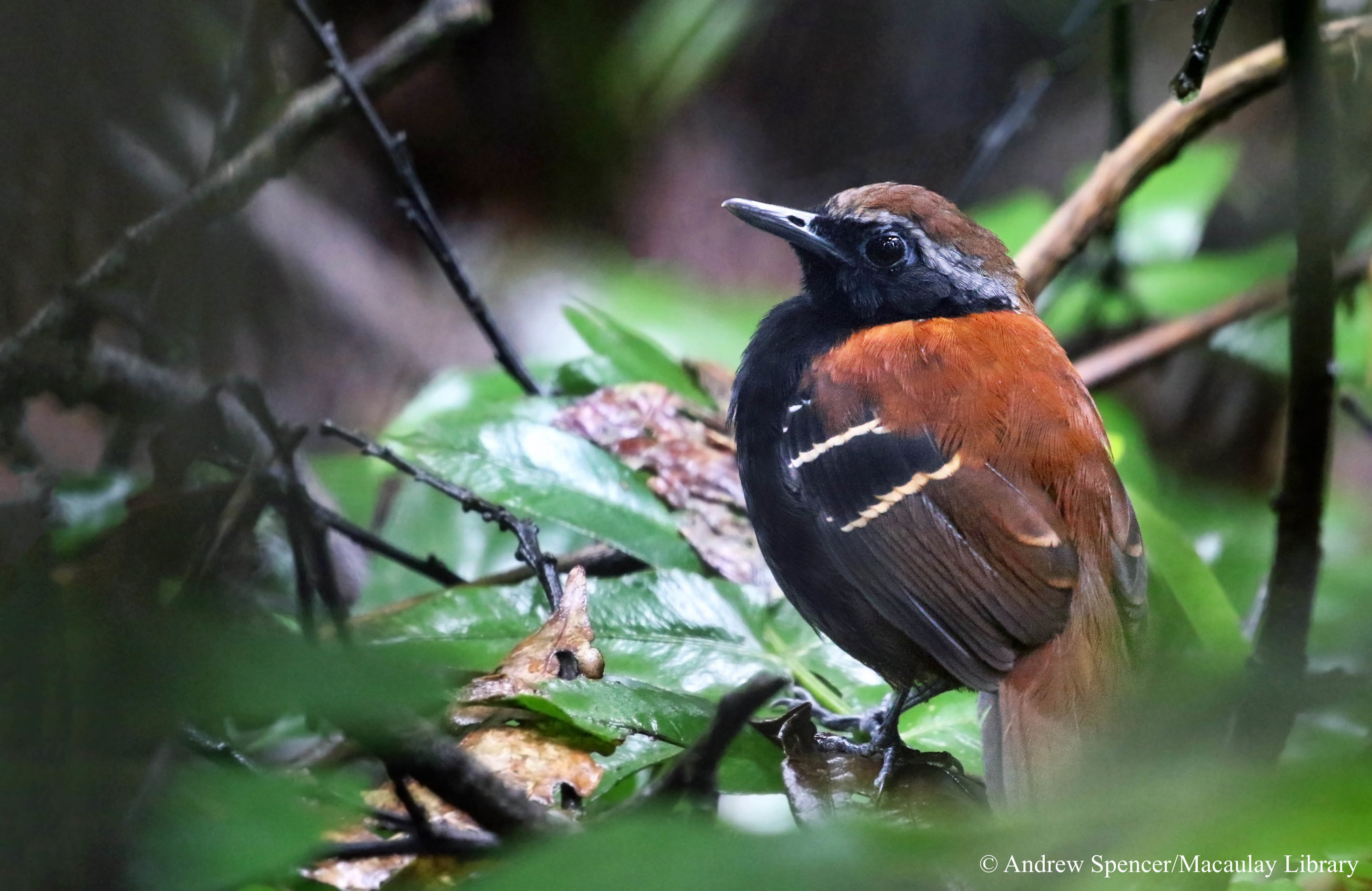 Flor de Café is already well known among birders, as it offers what is currently the only reasonably accessible site for the highly desirable and range-restricted Scarlet-banded Barbet, a species itself classified as Vulnerable.

Unfortunately, the immediate area around the town is being deforested at an alarming rate, and the future of both the new antbird and the barbet here looks bleak. Andre Moncreiff, one of the birders involved in the discovery and co-author of the paper, explained to phys.org: “Chainsaws were an overwhelming component of the soundscape around town. We even asked some locals to delay cutting activities so that we could get better voice recordings of the antbird. Sun-coffee farming, which necessitates clear-cutting, is the main source of income for the residents of Flor de Café. By contrast, birding ecotourism benefits only a few residents, leading to some unfortunate and ongoing tensions within the town. There is clearly a great need for environmental education and conservation work in the region.”

Although the antbird is currently known only from this one ridge in the Cordillera Azul, the team remains optimistic. Flor de Café is situated very close to the Cordillera Azul National Park which was created in 2001 and contains over 8,400 square miles of pristine habitat. Further fieldwork to better estimate its distribution and population size is needed, including in the park itself, where both Cordillera Azul Antbird and Scarlet-banded Barbet are likely to be found, safely hidden away from the chainsaws.