Flying in from Lima, Peru’s sprawling coastal capital, across the snow-capped spine of the Andes to Puerto Maldonado, glimpses of the country’s vast Amazonian wilderness appear tantalisingly between the clouds. When the sky finally clears, all we can see from 30,000 feet is what looks like a limitless expanse of rainforest, broken only by the occasional meandering course of a mud-coloured tributary, winding its way towards the world’s greatest river. 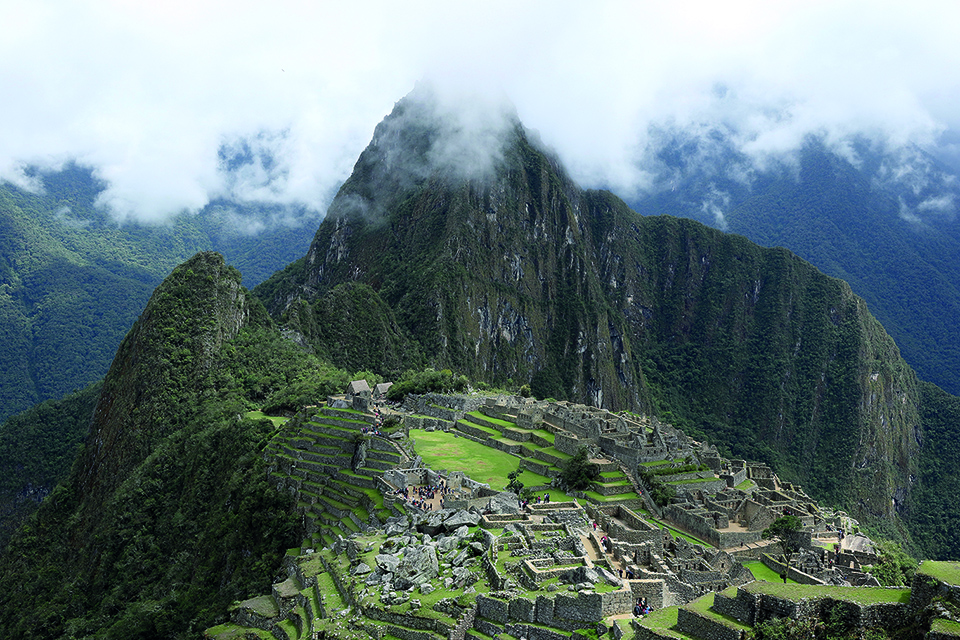 Much of Amazonia has been devastated by Man, with logging, settlement, industry and especially cattle ranching driving the clearance of an estimated 110,000 square miles since 1978. While all countries in the Amazon catchment have been affected, degradation in south-east Peru has been far less prolific than most, and in many places this immense ecosystem still seems to function as it has done for millennia.

There are no roads to facilitate access to the interior from Puerto Maldonado, so we boarded a large, motorised dugout canoe and set off along the Rio Madre de Dios, whose waters extend along a 400-mile course from Peru into Bolivia and ultimately Brazil, before merging with another tributary to reach the mighty Amazon.

It’s 12 miles or so along the river to the Inkaterra Guides Field Station, our base at the start of this adventure, and arrival in the afternoon means there is time for an Amazonian birding appetiser. The inaccessible nature of the jungle terrain here means that we only hear rather than see species such as Great and Bartlett's Tinamous, Amazonian Pygmy Owl and Black-faced Antthrush, but there are visual successes in the form of Black-fronted Nunbird, Swallow-winged Puffbird, Curl-crested Aracari, Cobalt-winged Parakeet, Masked Tityra and Turquoise Tanager. An observation tower with views into and beyond the tree-tops helps produce some of these sought-after species but negotiating the linked canopy walkways as dusk falls proves more challenging and something of a distraction from the task in hand. 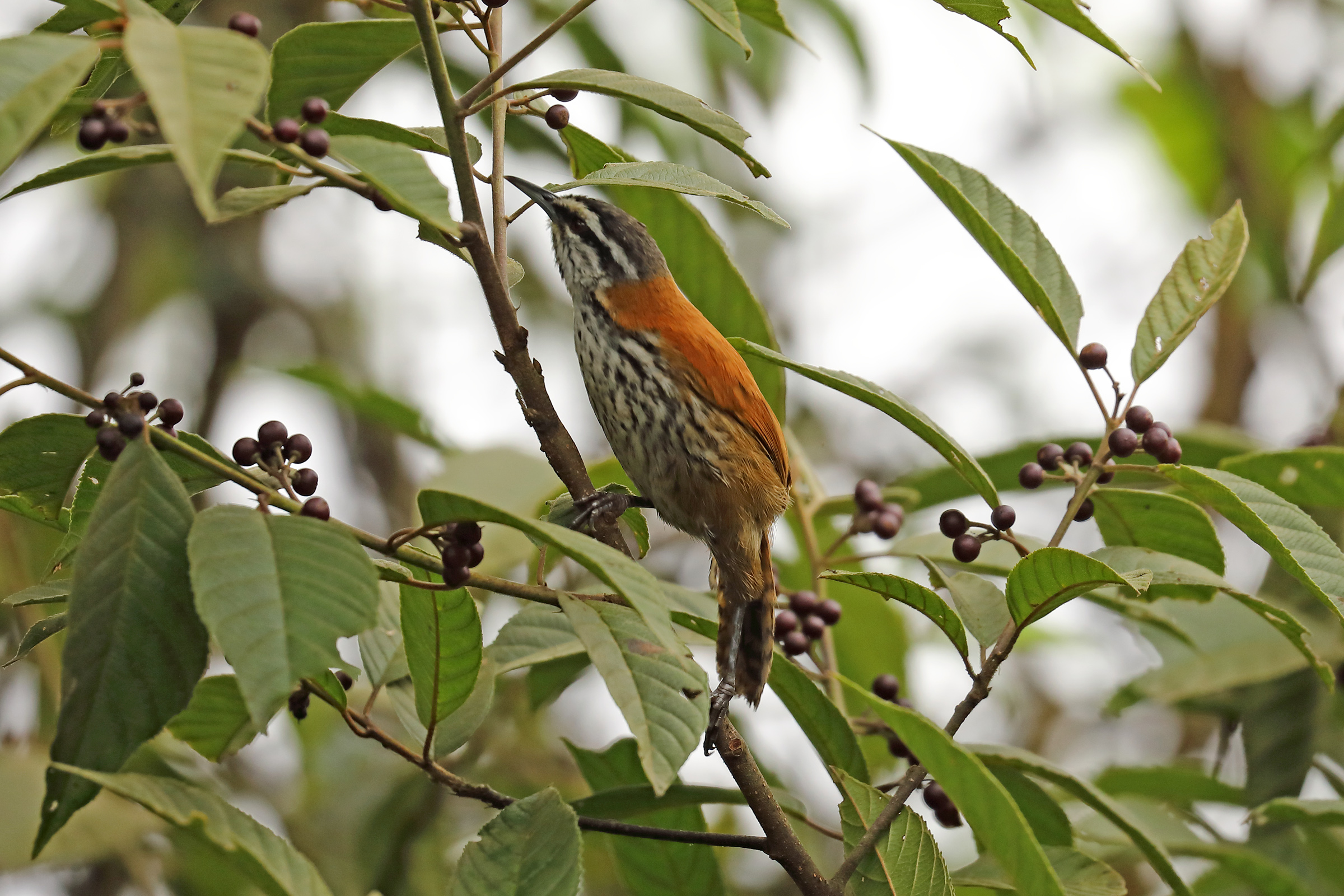 Inca Wren was discovered at Machu Picchu and is endemic to Peru (Dominic Mitchell / www.birdingetc.com).

Another owl, Ferruginous Pygmy, heralds dawn on day two, and after a hearty breakfast interrupted by the likes of Amazonian Motmot, Violaceous Jay and Black-billed Thrush, we set off again on the river in the general direction of the Bolivian border, noting numerous Plumbeous Kites, Great Black and Grey-lined Hawks, Black Caracara and our first Scarlet Macaw of the trip. Collared Plover, Large-billed Tern and Sand-colored Nighthawk are also welcome surprises, but when the canoe begins to navigate a narrow side channel of the main river, we enter a different world of sights and sounds. 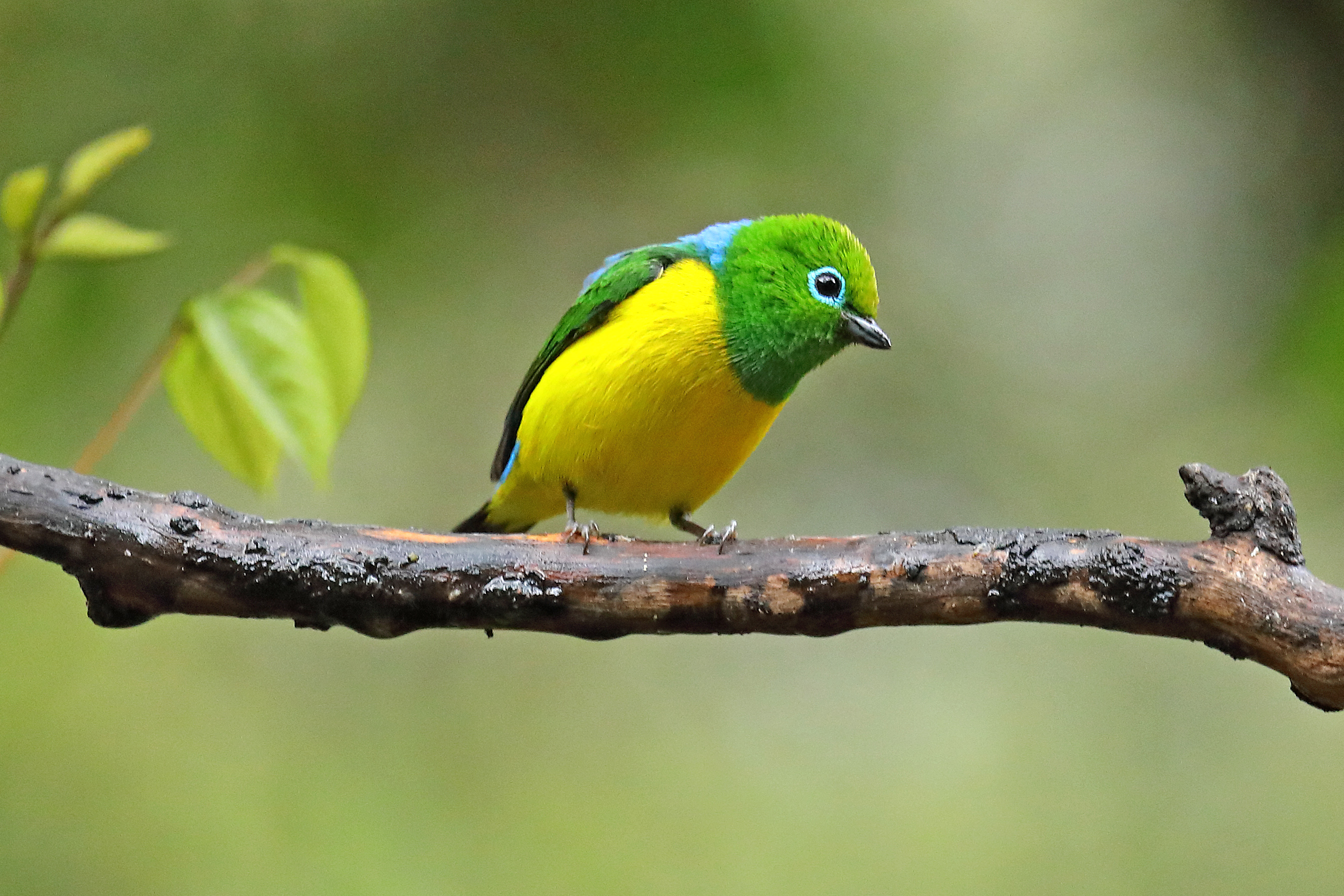 With luck the colourful but unobtrusive Blue-naped Chlorophonia can be encountered on the east slopes of the Andes (Dominic Mitchell / www.birdingetc.com).

As the dugout probes its way through low vegetation overhanging the water, eerie, guttural hissing sounds emanate from deep cover. I’ve never experienced anything like it before, and though I know the identity of the vocalist, I’m still ill-prepared for my first encounter. All of a sudden, a huge Hoatzin lumbers off its perch close to the boat, wing-flapping clumsily to join its mate clambering about in the branches just above the water.

Then we see another, and another – suddenly there are Hoatzins everywhere. The young of this gregarious species have claws on their wings to help them climb and can even swim, emphasising the uniqueness that has made the species impossible to classify satisfactorily.

Hoatzins are not the only residents of this swampy channel. The likes of Cocoi Heron, Greater Ani and Red-capped Cardinal quickly begin to swell the trip list, but they are outdone by the pair of bee-eater-like Bluish-fronted Jacamars and the roosting Ladder-tailed Nightjar that sits motionless as our canoe glides past within feet. In wet forest nearby, a Pavonine Quetzal is the highlight of our trek in the heat of the day. 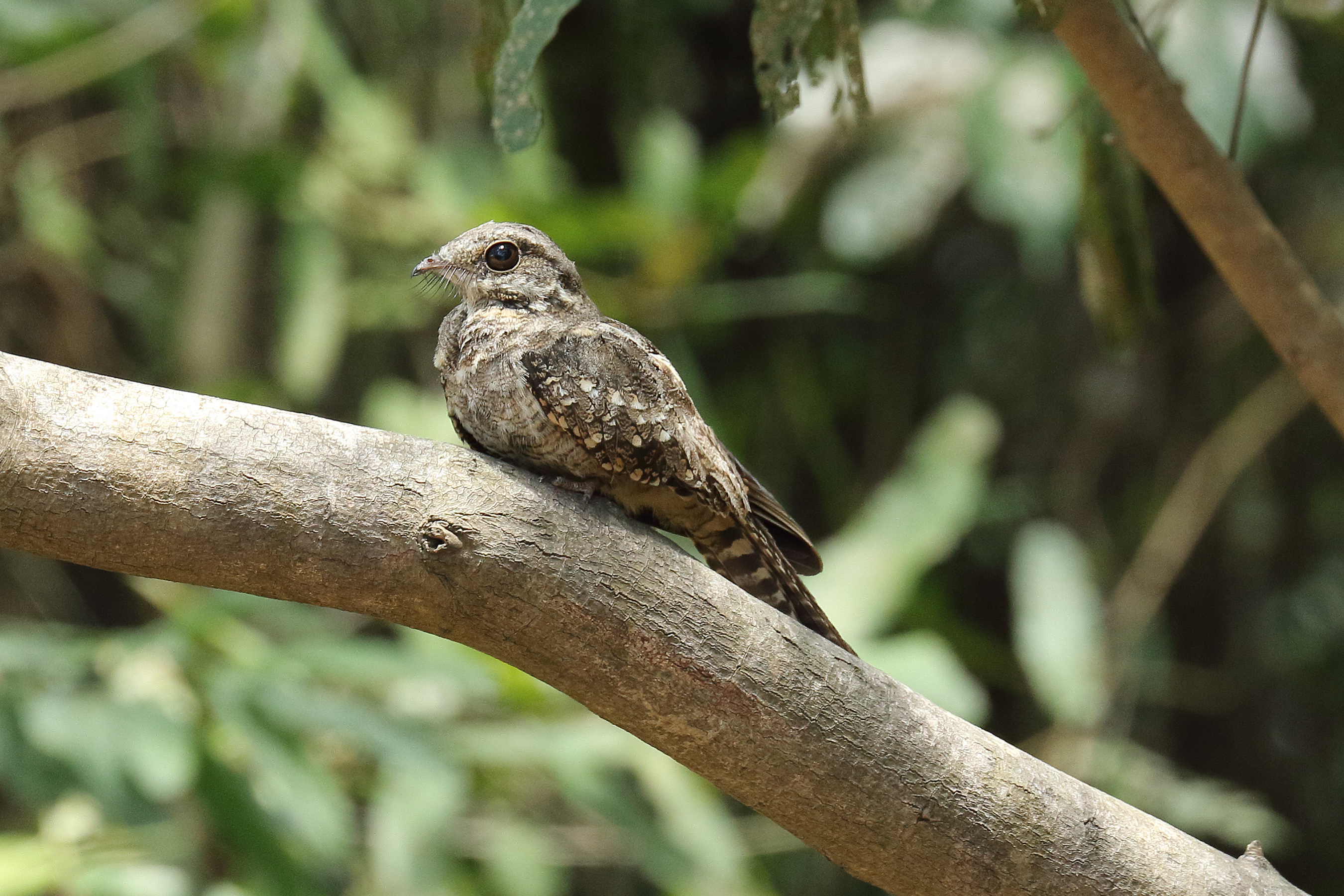 A roosting Ladder-tailed Nightjar was seen as the canoe glided silently past the bird’s chosen branch (Dominic Mitchell / www.birdingetc.com).

This corner of Peru has many such hot-spots hidden away, and a huge diversity of species waiting for the adventurous birder. To prove the point, in 2015 a team of American birders – based at the same Inkaterra lodge where we stayed – logged no fewer than 306 species in 18 hours as part of eBird’s Global Big Day event, an extraordinary total.

There is, of course, plenty more to look at than just birds. At Lago Sandoval, where we paddled in dugouts along the lake edge admiring Sunbittern, Green Ibis and a family of Grey-necked Wood Rails, an inquisitive Black Caiman stealthily approached to within a few feet. Better still were the pair of Giant River Otters, oblivious to our presence as they caught and despatched fish after fish, before an electric storm brought the encounter to an abrupt end.

It had been an extremely productive introduction to Amazonia’s birds, but we felt we’d barely scratched the surface of what this vast area had to offer by the time we set off back up the Madre de Dios to Puerto Maldonado, another adventure lying ahead.

Cusco is Peru’s best-known gateway to the Andes. At 11,200 feet, this historic capital of the Inca empire sits high in the Huatanay river valley, to the south of the Vilcabamba range. As birders so often do, we bypassed the numerous cultural attractions of this UNESCO World Heritage Site and headed straight into the sweeping Andean landscape of mountains, lakes and páramo in search of treasures of an avian kind. 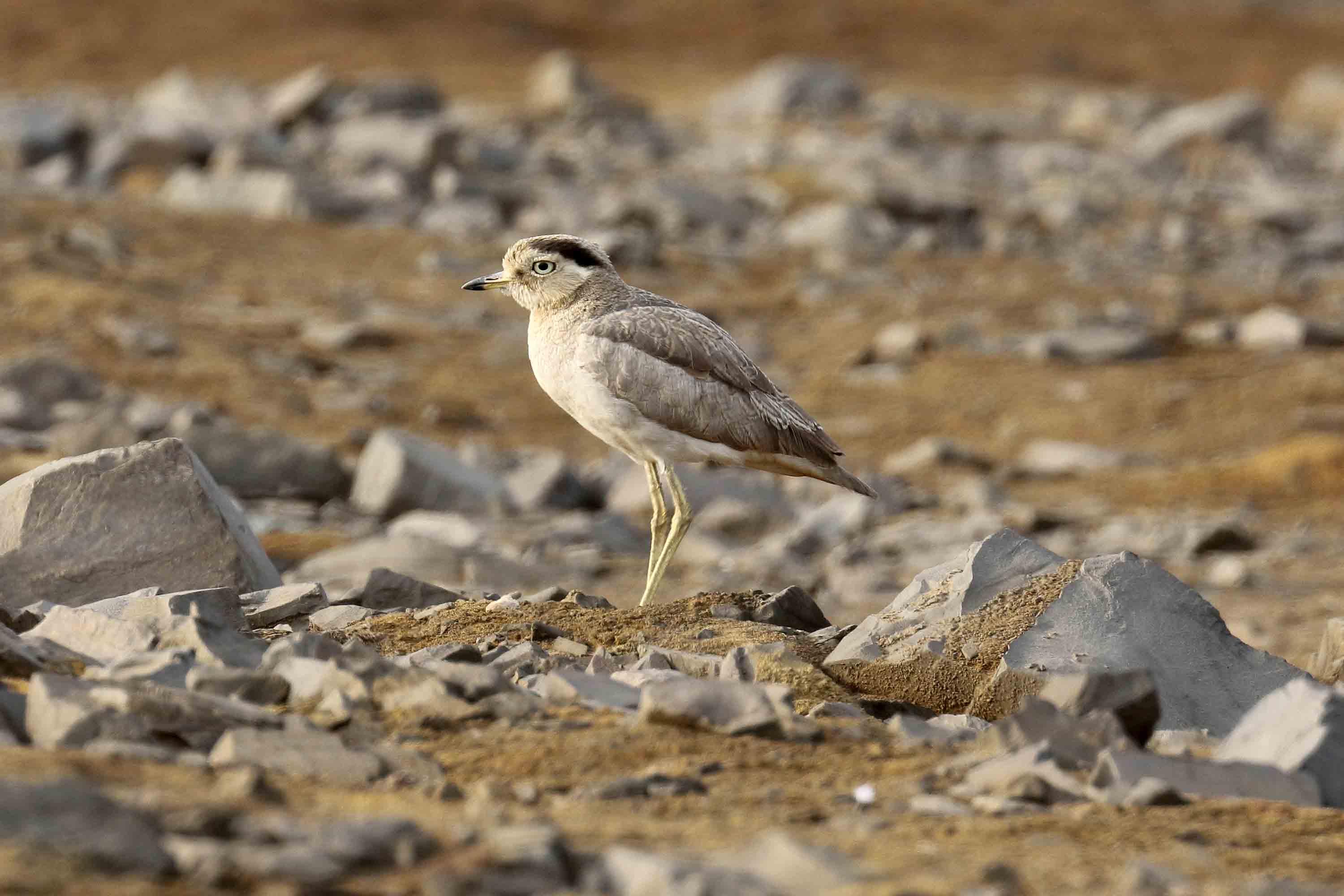 Peruvian Thick-knee was among a number of last-minute additions to a remarkable trip list (Dominic Mitchell / www.birdingetc.com).

For first-time visitors to these remote uplands, one of the most bizarre scenes is the flamingos in wetlands flanked by snow-capped peaks. They make an extraordinary sight, but Chilean Flamingos are very much at home at altitude, occurring at elevations as high as 14,500 feet.

As we watched one group of them feed and preen, Andean Gulls arrived en masse around us, Yellow-billed Pintail and Puna Teal fed in the shallows, and we found the only rarity of the trip – two Sanderlings on a muddy lake margin! White-tufted Grebe, ‘Andean’ Ruddy Duck, Puna Ibis and Andean Coot are among the more typical denizens of these montane wetlands.

Birding at high altitudes brings other issues, and it can be pretty tough going when the air is so thin. In proper páramo habitat at Abra Málaga, two and a half times the elevation of Ben Nevis, uphill walking proved challenging, but we still managed to locate the likes of Andean Lapwing, Plumbeous and Ash-breasted Sierra Finch, Cordilleran Canastero and White-winged Cinclodes. For the really intrepid, a more arduous trek here can net Royal Cinclodes. From this high point, we descended 1,500 feet to Ollantaytambo in the Sacred Valley for the most memorable experience of our time in southern Peru.

The course of the Urubamba River weaves along the floor of this narrow and spectacular valley towards Machu Picchu, the ultimate goal of many travellers to the region. Against the topographical odds, a mountain railway also runs alongside the river, providing a breathtaking perspective of the Andes – including through the glass-panelled train roof – and a unique way to bird this 23-mile corridor.

We boarded at Ollantaytambo and settled in position in a spotless, unoccupied carriage, scanning the river as the train rolled out of the station. It didn’t take long before the first shout went up of “Torrent Duck!”, and this icon of Andean rivers soon proved to be numerous along the Urubamba. Harder to locate was that other fast-water speciality, White-capped Dipper, but between the outward and return journeys, everyone finally managed to score this species, too.

Machu Picchu itself was one cultural attraction we couldn’t bypass. The vista as early morning cloud rolled back to reveal this 15th-century Inca citadel was nothing short of incredible, and we spent a full morning walking the ruins and learning about the history of this ancient civilisation. Inevitably, we birded as we did so, and among many other species were treated to excellent looks at Inca Wren – first discovered here as recently as the 1960s, and one of 105 species endemic to the country.

Not far away, the Inkaterra Machu Picchu Pueblo Hotel where we stayed brought a whole new suite of species, including Andean Guan, Andean Motmot, Andean Cock-of-the-Rock, Saffron-crowned Tanager and Blue-naped Chlorophonia, to name just a few. Several choice finds came courtesy of the local guides trained and employed by Inkaterra at the hotel, a reminder that in this part of the world tourism and conservation often go successfully hand in hand.

This theme was underlined at the end of the trip when we regrouped with a suite of ecotourist companies in Lima. Organisations like these rely on the natural world, and the most proactive ones such as Inkaterra are heavily invested in protecting it, promoting scientific research and conservation as well as sustainable development.

I reflected on this as we visited the capital’s coast before returning to the airport, with Peruvian Booby, Peruvian Thick-knee, Grey Gull and Inca Tern among the last additions to a phenomenal trip list. Despite our successes we hadn’t even seen 15 per cent of the bird species this country has to offer, and already I found myself planning to come back.

Special thanks to Denis Osorio and Inkaterra, Wilson Diaz of Green Tours and Prom Peru. The author would also like to thank Gunnar Engblom of Kolibri Expeditions.

•  For information about Inkaterra lodges and hotels or to make a reservation, visit www.inkaterra.com, email central@inkaterra.com or call 0800 458 7506.
•  British Airways flies direct from Gatwick to Lima twice a week in winter, with an additional flight in summer. Other flights with connections are available from the UK and elsewhere.
•  For general tourist information, visit the official travel and tourism portal for Peru at www.peru.travel/en-uk. The website also has a section on nature and biodiversity: www.peru.travel/en-uk/what-to-do/natural-peru.