Perseverance pays off for finding dotterel

Birders are motivated by different things. For many, the listing element plays a big part, with thousands actively pursuing a British list and lots more dedicated to their patch lists. For others, listing plays a much smaller role, with their passions instead lying with aspects such as counting visible migration, a conservation project, a single-species study, as well as numerous other reasons. For me, it is my self-found list: increasing the number of species I have happened across while in the field, rather than those I have previously known about or twitched. Finding my own birds in this way provides a framework for learning, adventure and discovery.

I've always been particularly thrilled about the prospect of finding waders; species such as Wood and Pectoral Sandpipers rank among my favourite species. Slowly but surely, I've found a decent selection of scarce and rare waders, but there was a constant nagging hole in my list: Eurasian Dotterel.

In spring 2016, I decided to make a focused effort to try to find a dotterel. My approach was to repeatedly check a spring-sown cereal field a few miles from my house, at a site which has several historical records of the species, as well as various other local fields. That effort failed, so in 2017 I tried a different tack. I made three visits to Danby Beacon, North Yorkshire, and a single visit to Pendle Hill, Lancashire, during peak Eurasian Dotterel migration, as well as checking other more local sites. Surely repeated visits to two of the best dotterel sites in country would not fail? It did fail, and to make it worse, the species was found at both sites shortly after my visits. 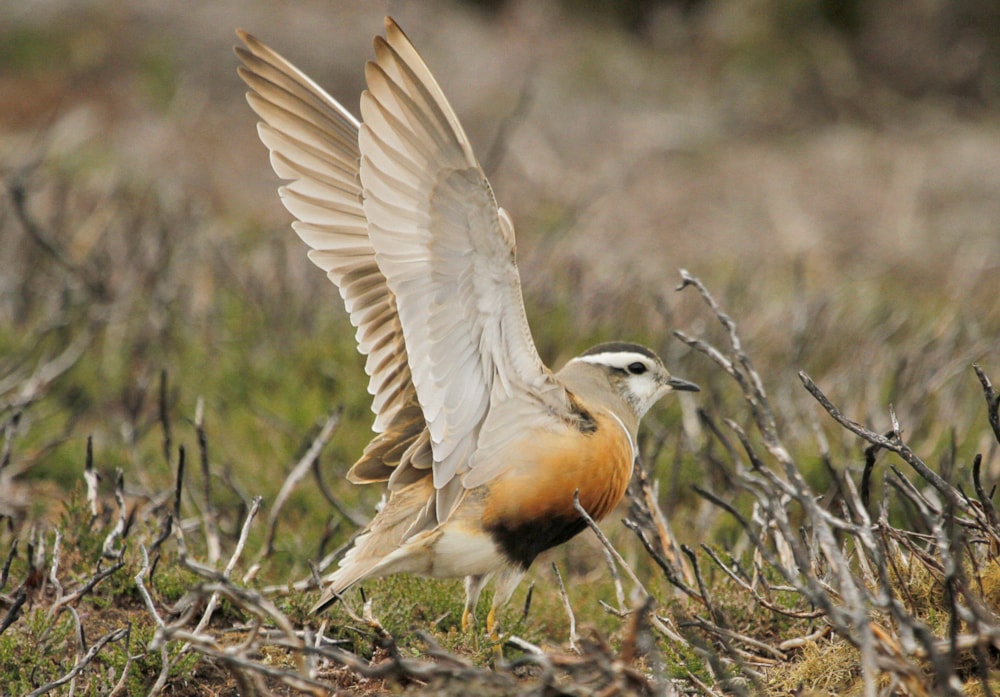 Following two unsuccessful visits to Danby Beacon in 2017, this Eurasian Dotterel was one of a pair that turned up there just days afterwards (Wayne Dixon).

In spring 2018, my tactics changed again. I counted the number of fields that I scanned using a clicker, with the aim of scanning as many suitable-looking fields as possible. I didn't target any particular sites, I simply stopped and scanned any bare fields that I happened to pass. Importantly, I posted regular updates on the number of fields I had scanned on my Twitter feed. Why was this important? I believe that going public with your goals makes you more accountable and spurs you on to achieve them.

We all know what Eurasian Dotterel looks like, but unfortunately we don't always get frame-filling views of birds, so I tried to ensure I knew what they'd look like when half a mile away, in the heat haze and huddled down in grass. I developed a 'search image' for dotterel by looking at record shots, such as the one taken on Fair Isle below. 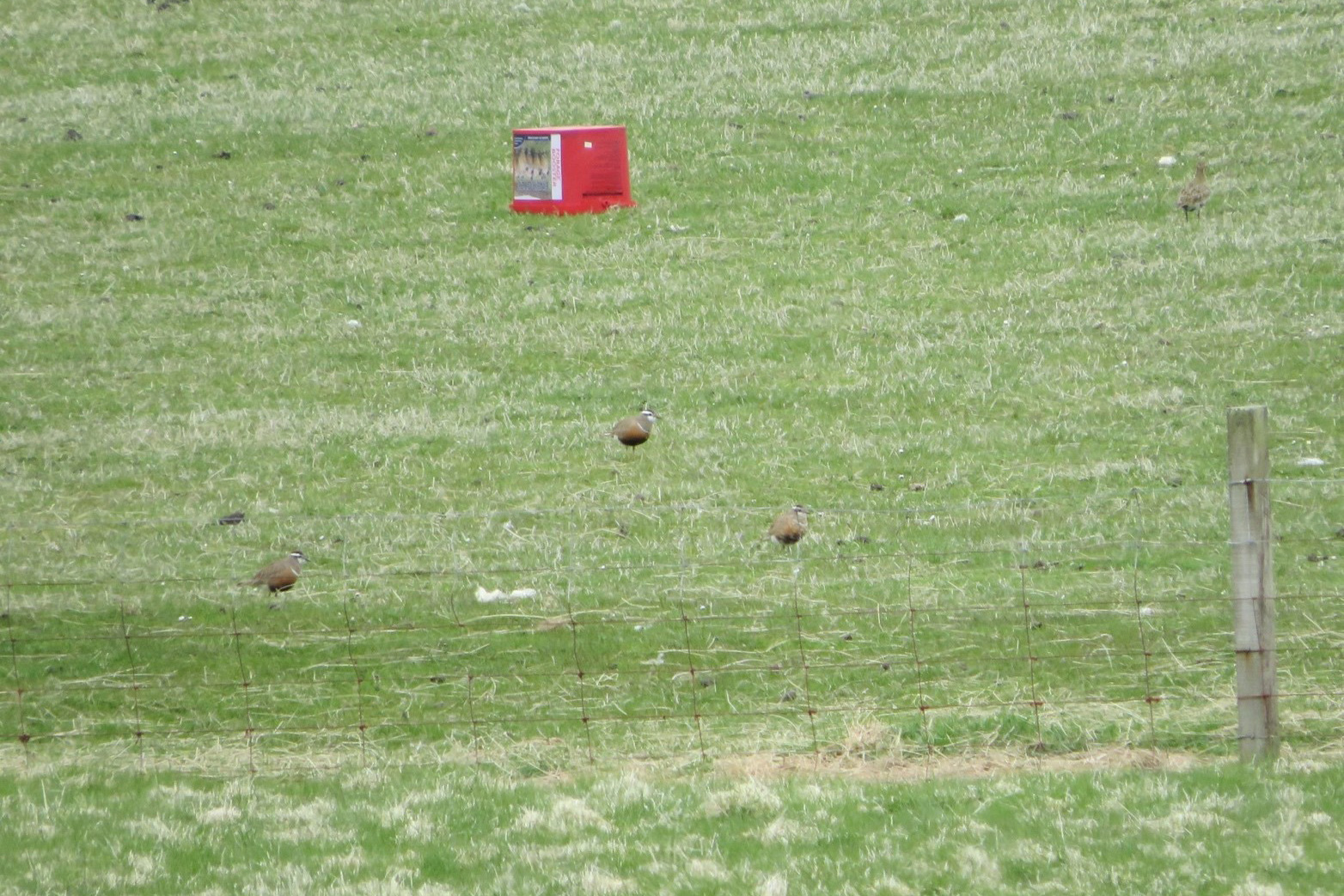 Eurasian Dotterel on Fair Isle, Shetland, May 2018. I had saved this photo to my phone to help develop a search image of what dotterel look like when stood distantly in a field (Richard Cope/www.fairislebirdobs.co.uk).

I finished work on Tuesday 8 May and was driving down the A68 near Hallington Reservoirs, Northumberland, when I passed a bare field. I pulled over and scanned with my bins from inside the car. I could barely believe it. There in front of me were six stunning dotterel! That split-second moment when a loose group of stripy, orange-and-black-bellied waders came into my field of view will stay with me forever. Why this field? Why now? No idea, but I'd finally found them! 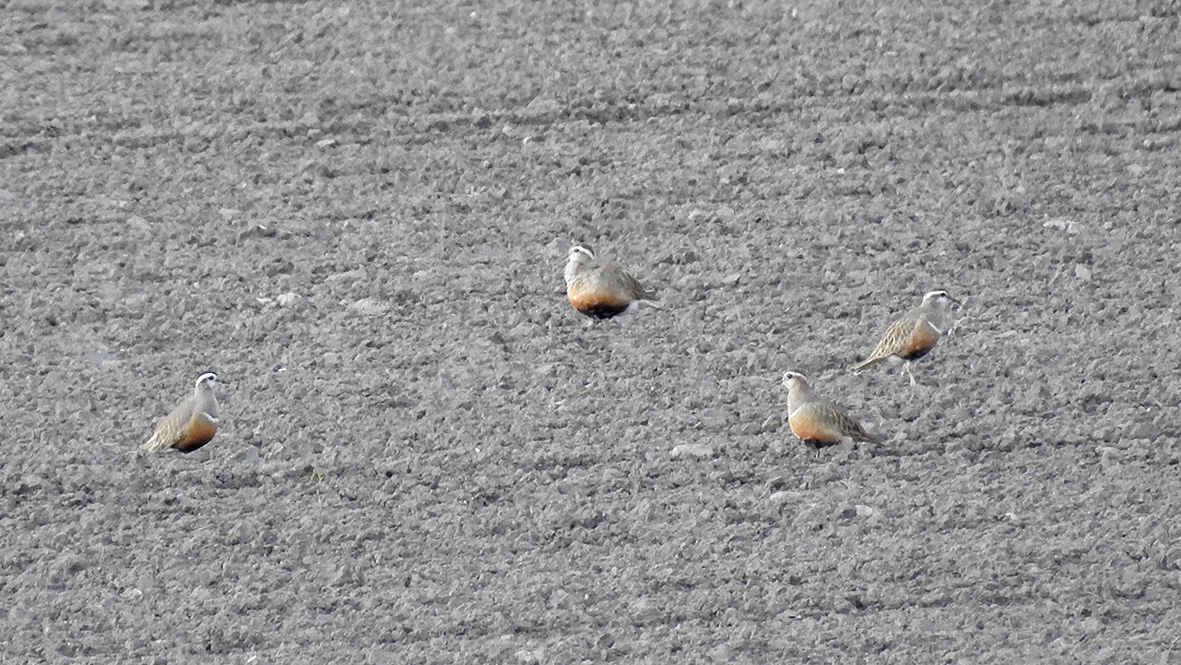 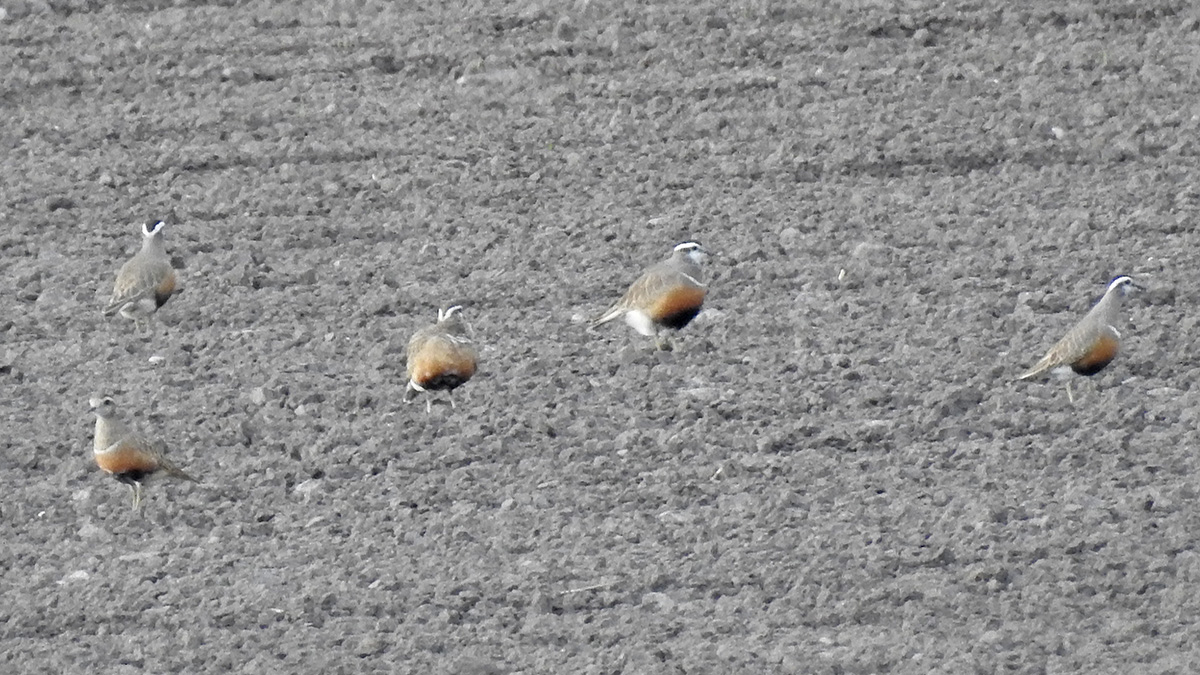 The field in which the six Eurasian Dotterel were stood was the 158th bare field I had scanned since late April. I didn't even expect the counting fields idea to work; I just thought it was something fun to try out. As most bird-finders acknowledge, there is an element of chance and randomness to finding rare species (referred to by some as ‘luck'). I could have scanned just two or three fields before finding the flock at Hallington, or indeed I could have scanned many hundreds more. As far as I know, the Hallington area isn't a traditional 'tripping' ground; there are no recent records at least.