New research has revealed that penguins are being drowned as a result of their encounters with fishing boats, by getting entangled in fishing nets as the birds dive for food. Until now, the impact of by-catch on penguins has been poorly understood. However, a group of penguin and global fisheries experts led by BirdLife International has drawn together what is known of this phenomenon to highlight the species most affected and the fishing equipment with the greatest impact.

The review found that of 18 penguin species, 14 have been recorded as by-catch in fisheries. For many of these, the records are sparse and limited conservation resources dictate that the focus is on those for which by-catch levels are of greatest concern. The paper concludes that by-catch poses the greatest risk to three species: Humboldt (Vulnerable) and Magellanic Penguins (Near Threatened) are both found in South America, while Yellow-eyed Penguin (Endangered) is endemic to New Zealand. These three species have been recorded as captures in gillnets – fishing gear usually comprised of fine, near-invisible nylon that catches fish around the gills.

The by-catch of Yellow-eyed Penguin is of the greatest concern. Populations of this endangered species are small and fragile and, while official estimates of by-catch in gillnets are relatively low at 35 birds per year, this is likely to be an underestimate owing to limited observer coverage. Even this low number has the potential to contribute to the species’ demise, with its low global population estimate of just 3,400. The recent crash of the important population on predator-free Codfish Island brings the issue into sharp relief – without substantially increased observation of the New Zealand set-net fleet and management action there is a very real risk that by-catch will push Yellow-eyed Penguin towards extinction. 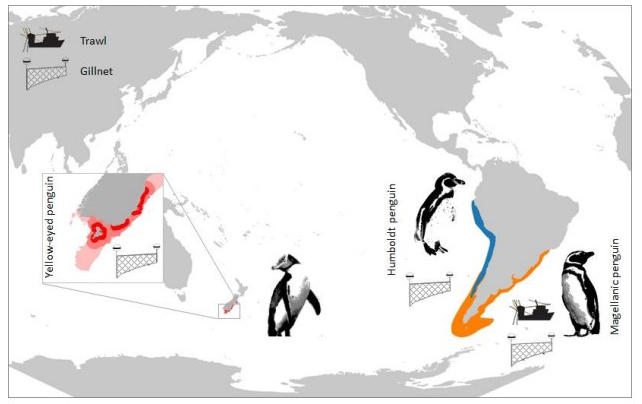 At-sea distribution of the three penguin species for which by-catch is currently of most concern, and the fishing gear types that the birds interact with most frequently. These ranges represent priority sites for conservation action on penguin by-catch. For Yellow-eyed Penguin, dark red areas denote foraging range in a ‘normal’ breeding season, with the lighter shade representing expanded range for breeding birds when food supply is poorer. The pink shading denotes the non-breeding foraging range, limited by the 150 m depth contour (BirdLife International and Eudyptes Ecoconsulting).

The review also reveals that Magellanic Penguins have been caught in trawlers (vessels that pull large nets through the water behind them) off the coast of Argentina. The impact of a number of individual fisheries on Magellanic Penguins has been assessed through the years, and separately none of these has been deemed to be killing penguins in sufficient numbers to affect their populations. This includes industrial trawl vessels off the coast of Argentina and smaller-scale gill-netters in Argentina and southern Brazil. However, the cumulative impact of these fisheries across the birds’ migratory route from seas off Argentina and Chile to those off Brazil and Uruguay has not been assessed. With the species listed as Near Threatened, the need to understand the impact of by-catch is pressing.

There is a lack of contemporary data on the by-catch of Humboldt Penguins, but it is historically high in Peruvian and Chilean gillnets. The size of these fleets (more than 10,000 vessels are thought to use gillnets in Peru alone) means monitoring is no small undertaking, but the conservation status of Humboldt Penguin – Vulnerable on the IUCN Red List – means action is critical.

BirdLife says it is working to develop technical solutions to the issue of gillnet by-catch. The implementation of such measures in trawl and longline fisheries has proven to be hugely effective in reducing albatross by-catch, partly because they allow fishermen to keep fishing while limiting their impact on non-target species. One solution currently being tested is the development of black-and-white sheets that are fixed to fishing nets and alert diving birds to their presence; gillnets are otherwise invisible to birds underwater.

It is clear from the review, though, that Humboldt, Magellanic and particularly Yellow-eyed Penguins can’t afford to wait for technical fixes in the face of myriad threats from climate change, invasive predators and habitat loss. In the short term, BirdLife is attempting to improve observation of the fleets that pose a risk to penguins, so that action can be taken to minimise the loss of these unique birds.