A new study has found that the quality of the calls penguins use to attract mates, defend territories and recognise fellow members of their species is driven by habitat.

A lot is known about how variations in vocalisations play out between populations of songbirds, but it is far less clear how this variation affects birds such as penguins, in which calls are inherited. The new study examined differences in the calls of Little Penguins – nocturnal birds for whom vocalisations are more important that visual signals – from four colonies in Australia, and found that disparities in habitat rather than geographic isolation or other factors seem to be the key driver of differences in the sounds these birds use to communicate.

Diane Colombelli-Négrel and Rachel Smale of Australia’s Flinders University recorded calls from four Little Penguin populations across a small area of South Australia – one of which had previously been shown to have subtle genetic differences from the other three – and used playback experiments to test the penguins’ ability to distinguish between calls from different colonies.

They found that agonistic (combative) calls, which are used in pair displays and aggressive situations, varied among the four populations, and that the calls’ characteristics appeared to depend on small-scale differences in the habitat where the penguins lived. However, birds did not discriminate between calls originating from different colonies, which suggests that agonistic calls don’t seem to play a role in isolating the two different genetic groups. 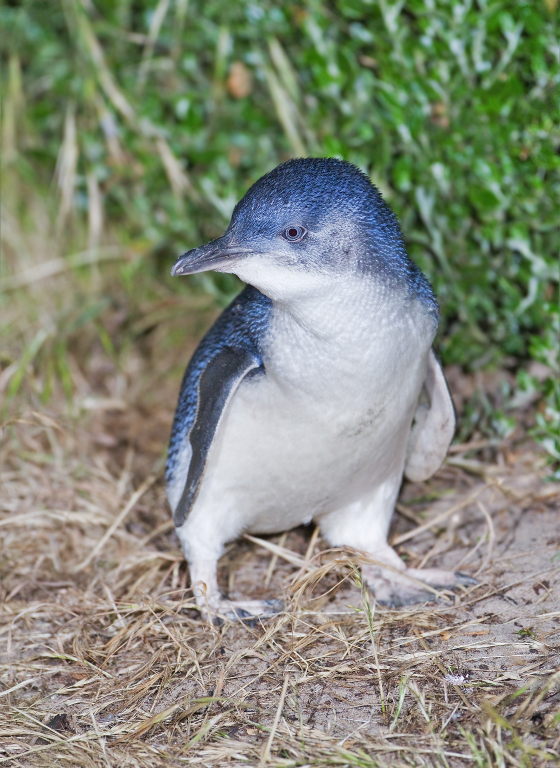 Little Penguins, such as this bird in Tasmania, host breeding colonies in different coastal habitats, and seem to change their vocalisations accordingly. Photo: JJ Harrison (www.jjharrison.com.au/).

Penguins breeding in open habitats produced lower-frequency calls than those nesting in habitats with denser vegetation, the opposite of the trend typically observed in songbirds. The authors speculate that agonistic calls may be subject to different selective pressures because they are used in close encounters with other birds rather than to communicate across distances; they could also be influenced by variation in the noise level of wind and surf.

“I was excited to find that calls were influenced by habitat, as this hasn’t been investigated much in seabirds and most of our knowledge in this area comes from studies on songbirds,” said Colombelli-Négrel. “This new research suggests that many factors influence call variation in birds, which also depends on the function of the calls. This study highlights that many questions remain and that studies need to investigate more than one factor in conjunction with the function of the calls to fully understand call variation in seabirds.”