Cures for the summertime blues

Eddie Cochrane had it all wrong — there is a cure for the summertime blues, and it's called patch birding!

While July is a traditionally quiet month, this year it saw all manner of rarities turn up across the country, and it was great to see some Patchwork Challengers getting in on the act. However, not all of us were blessed such with good luck, so let's start at the other end of the scale.

Among those who struggled in July were a couple of the more high-scoring competitors. Kev Rylands listed his highlights at Dawlish as 'not July', while Paul Higson, patching Quoyangry on South Ronaldsay, listed his highlight as a Common Swift, and his best find as 'another swift'. Sean Morris, on Rum, described July as 'another blank month' but could at least look forward to finishing off breeding season monitoring and getting back to some serious patchwork. Nick Robinson, at the University of East Anglia, simply listed his highlights and best finds as 'Nil' and 'Nil'. Cheer up Nick — autumn is coming!

Most of the highlights from those who did encounter something worth reporting had a pretty summery feel. Waders proved popular, especially Wood and Green Sandpipers with several of each, and Spotted Redshanks, Curlew Sandpipers, and Red-necked Phalaropes for a lucky few. Seabirds also featured, with Pomarine Skuas getting a few mentions, Balearic Shearwaters showing up for the first time, and the odd large shearwater putting in an appearance. Seabirds also produced the bulk of the major highlights of the month — more on that in a moment. Common Crossbill was the only passerine species mentioned with any regularity, and a close relative also made it into our list of highlights. No prizes for guessing what that was.

Speaking of prizes, we're very happy to announce that the good folk at BirdGuides have very generously offered some prizes for Patchwork Challengers! Annual subscriptions to the web-based news service Bird News Extra for 2014 will be awarded to the winners of the following:

Even more incentive to get out there and hit your patches hard! BirdGuides have been very supportive of the whole PWC adventure, and these extra prizes, alongside the Meopta and Forest Optic best find competition, mean there are now 5 chances to win!

A couple of the better birds that turned up in July were frustratingly not finds. Up on Shetland, Gary Bell was beaten to a patch Two-barred Crossbill, while Rob Fray did the noble thing and didn't claim the find points for a Gull-billed Tern that came through his Virkie patch, having been found previously at Scatness. There were, however, two records that may well trouble the shortlist for the Meopta and Forest best find competition. We hadn't really considered unusual multiple records for this aspect of the competition, but if there is no room for a single Fea's Petrel on the shortlist at the end of the year, I'm sure we can make some room for Colin Barton's awesome three birds in one evening seawatch from Galley Head — I bet he was glad he was sitting down for that! The real biggie came to someone who was also probably sitting down at the time, as he tucked into some freshly caught mackerel off the barbecue: Mark Newell brought his Patchwork Challenge to a close in some style as the Isle of May pulled in one of the summer's most popular birds, the Bridled Tern that had previously spent time on the Farne Islands. 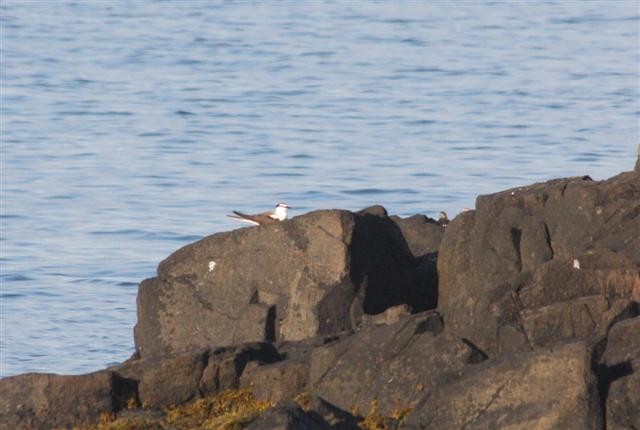 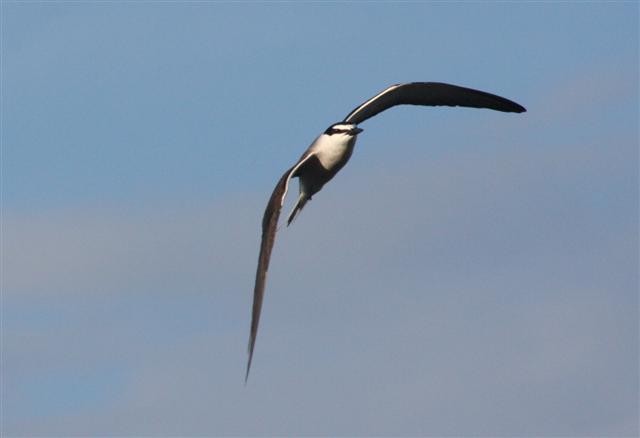 The Bridled Tern on the Isle of May, Fife (Photo: Mark Newell).

As far as cumulative totals go, we are now on a total of 273 species, just 27 off our target of 300 (although I'm sure there have been a few additions during August!). This means that we are on target to get £300 from Meopta and Forest Optic for Patch, the PWC cuckoo, whose progress can be monitored here.

What does this mean for the league tables then?

It's John Bowler from Tiree at the top of the overall point league, with a couple of the usual suspects from East Anglia (Jonathan Gibbs and Moss Taylor) pretty close behind. John is top by virtue of his higher scoring species rather than the number of birds:

At the top of the comparative league, another Scottish west-coast patch heads the pack, with Sean Morris out in front, although the top 5 places are pretty closely fought, and anything could happen in the autumn:

It's Scottish islands all the way (well, all the way to number 4) in the points per bird league, with John Bowler at the top of this tree too, closely followed by our two Shetland patchers. Mark Newell Leaps up into 4th as a result of his Bridled Tern:

We're already nearly seen August off and, with a pretty epic early autumn fall over the last weekend, it's going to be great fun seeing how patch-workers fared. Let's hope for more of the same in September!