The migration of millions of birds to their wintering and refuelling outposts in Spain is a passage which man has unwittingly traced for hundreds of years while following the Way of St James to visit the final resting place of the son of Zebedee. Tradition is maintained to the present day, as Christians continue to traverse Europe on this spiritual path. On World Migratory Bird Day (6 May 2016), however, the launch of BirdFlyway will open the route to another pilgrim: the birder. Inspired by the courses taken by two of Europe's most iconic migrants — Osprey and Greylag Goose — the project aims to bring bird and birder closer by encouraging us to share in nature's most wondrous journey by undertaking at least part of it ourselves.

BirdFlyway consists of 14 wetland centres across Europe from Sweden and Britain down to southern Spain, each of which acts as a unique stepping stone for avian and human travellers alike. Belgium, The Netherlands, France and Portugal are all hosts, and a further two centres are in the pipeline, potentially adding Finland and Denmark to the network. Participants are free to build their own birding adventure by choosing which centres to visit and the sequence in which they do so.

First registering at any of the centres, you are issued with a BirdFlyway passport and sent out to enjoy the birds and complete the challenges assigned for the stage. This involves visiting key sites in the area, which may be flagship birding spots or places of cultural significance, and bringing back photographs to the centre to prove it and get the passport stamped. In December 2015, I had the opportunity to enjoy a sneak preview of the Spanish section of the project.

Not so grey goose

One of the species mentioned earlier as an effective project mascot might well have roused a few quizzical eyebrows and I must confess to not fully grasping the choice myself until I visited Laguna de la Nava, near Palencia. We stopped by at dusk and I was left utterly dumbstruck by Greylag Goose for the first time in my life.

The bird with which I was all too familiar as a rowdy feral denizen of my part of the world was at once transformed into a creature of spectacle as legions of truly wild birds, which had spent the summer breeding on serene Scandinavian marshes, descended from every compass point to roost on the lagoon. The hundred or so bugling Common Cranes were thoroughly outclassed. We counted around 11,000, but Greylag numbers here can reach 20,000 birds and have been known to hit 35,000. 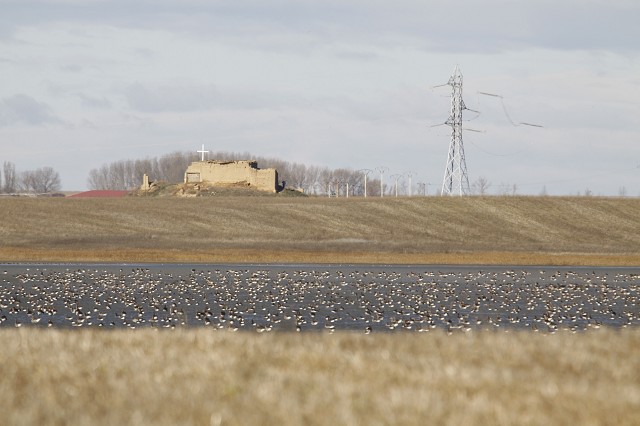 The existence of the lagoon today is attributable to the efforts of a number of organisations which have worked to restore a small portion of a formerly vast wetland largely lost to agriculture. At 307 h and with a depth of just 35 cm, the lagoon requires careful management to provide optimal habitat for breeding, wintering and passage birds from October to June and is otherwise left to dry out as part of its annual cycle. Among the mighty 221 species recorded at La Nava, it is most famed for its wintering wildfowl, raptors and Common Cranes, but also supports breeding species such as Whiskered Tern and Purple Heron, as well as being a site of international importance for migrating Aquatic Warblers.

We shot out of bed early the next morning for a repeat performance from the geese as they decamped to guzzle the day away in local fields. Just as we began to think about following them and exploring the wider area for ourselves, we were stopped in our tracks by a statuesque Bittern on the edge of the reeds, a local scarcity and unexpected bonus. A couple of hours spent driving around was rewarded by several loose congregations of Great Bustards standing proudly in crop fields shared by Calandra Larks, each and every one of which was too restless for photography.

We drove northwards to the Basque Country and its innovative Urdaibai Bird Centre, described as a great living museum of nature. A former fish factory, the immaculate building now acts as both the nucleus of the Urdaibai Biosphere Reserve and a hub of groundbreaking ornithological research, making it another perfect BirdFlyway host.

With spectacular displays, a theatre and an education room, together with telescopes and live cameras overlooking the marsh, the centre shows exactly how public engagement and science are done properly. Among its most exciting projects is the reintroduction of Osprey to the reserve, with 10 birds already released and fitted with GPS devices, and the tracking of Red-backed Shrike and Woodcock. 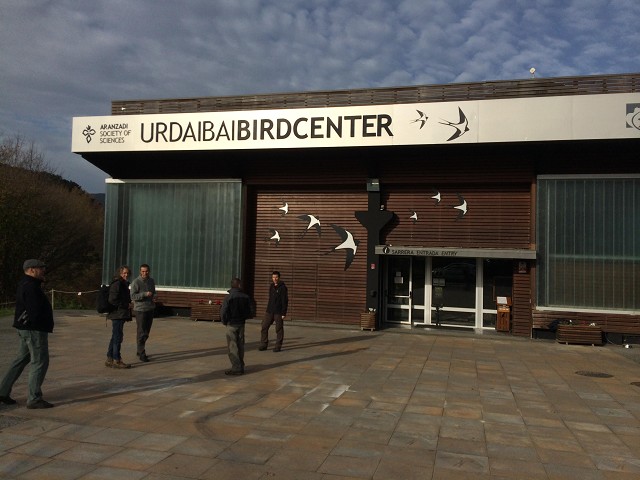 The biosphere reserve encompasses marshes, coastline and Holm Oak woodland as just some of the habitats within its ever-changing 85 square miles. It also supports a correspondingly impressive range of wildlife, with towards 250 species noted each year. Of particular interest, it is another regular site for migrant Aquatic Warblers.

During our stay, we failed to find either of the wintering Bitterns on the marsh, but it did hold seven Spoonbills, 24 Cattle Egrets and a medley of wildfowl. A search of the gently rolling pastures that neighbour the marsh produced the recently split Iberian Green Woodpecker and further up the hills we caught sight of a lone Griffon Vulture hanging high above us. The biosphere reserve is something of a raptor haven, with Short-toed and Booted Eagles, Black Kite and Goshawk all seen on a regular basis, and even a nesting pair of Egyptian Vultures. 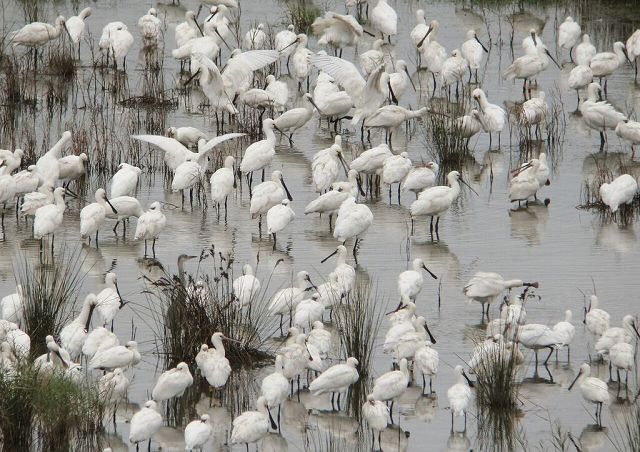 It was time to return south as there was more birding to the done the next morning at La Laguna de El Olso, where it was all about Common Crane. Tiptoeing into the hide and peering into the dim twilight, a swathe of dark forms were barely discernible in the shallows. Slowly they stirred as the light illuminated all 950 of them. Their soft trumpeting intensified until it became constant and groups began peeling off to leave the roost, and too soon they were all gone.

The White Storks, of which there were perhaps 80, were in no such hurry and waited for a little more warmth. In the far distance, two Iberian Imperial Eagles watched on while a group of Rock Sparrows and a showy Iberian Grey Shrike busied around just outside. We trudged through a pine wood in the hope of getting closer views of the eagles, adding Crested Tit and Short-toed Treecreeper to the trip list in the process, but had to make do with the life-size replica Iberian Imperial in the Lagunas de La Moraña visitor centre. Opening in 2016, the centre also features outstanding lifelike models of various other birds, as well as a video room, live cameras and a number of informative displays.

Our evening drive through Extremadura to Doñana National Park was enlivened by formations of Common Cranes passing in front of the setting sun and directly over the motorway. Extremadura is the core wintering area in Europe for this magnificent bird, supporting as many as 75,000 individuals each year. Doñana, the southernmost BirdFlyway host, is an indisputable gem in the Western Palearctic birding crown, with its marshes, scrub, woodland, dunes and beaches attracting more than 300 species.

In the morning, an experienced ranger treated us to an extensive tour of the national park, starting along the pristine coastline where we found Kentish Plover and took some time to admire the gatherings of Audouin's Gulls. The scrub afforded us excellent views of a couple of Black-winged Kites and countless Iberian Magpies.

For lunch, we stopped at a superb restaurant overlooking an area of marsh littered with Greater Flamingos, Glossy Ibises and Black-winged Stilts. I skipped dessert to buy some extra time in a bid to detect a Red-knobbed Coot among the throngs of Eurasians, but that particular tick box remained empty. Further exploration struck upon fresh Lynx tracks and the least expected bird of the trip, a flock of 10 Dotterels standing discreetly in a random field. As dusk fell, we marvelled once more at the roost flights of hundreds of Common Cranes and Greylag Geese. A perfect end to my BirdFlyway adventure.

For more information on BirdFlyway and how to get involved: