Continued from Part I...

Next morning we set off on a long drive north. Our progress was hampered when our bus broke down in a small town: the driveshaft had fractured. Whilst we imagined all sorts of horrors, we were amazed to find ourselves mobile again after two hours with a replacement driveshaft. Apparently all Indian buses are the same and it was just a matter of finding another one and getting it fixed. I could not imagine that being achieved so quickly anywhere else. Just as well, as we had only Bank Mynas to amuse us during the wait.

By early evening we were beginning to climb into the Himalayan foothills to Sattal, and as darkness fell we just had time for a little birding, scoring Streaked Laughingthrushes, Grey Bushchats and Red-billed Blue Magpies. 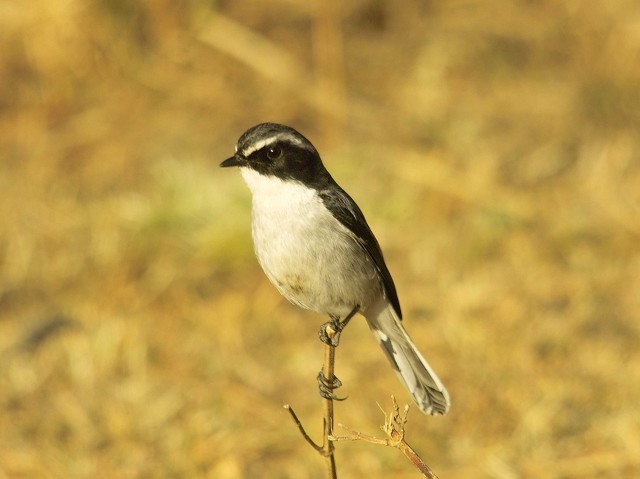 We spent the next day or two in this area and the number of species of birds seemed to increase enormously. Searching a scrubby area at dawn was absolutely unforgettable: it was in this area that we encountered a splendid Siberian Rubythroat skulking in little clearings between the bushes. Later an even more splendid Himalayan Rubythroat was followed by a striking Golden Bush-robin. Flocks of Slaty-headed Parakeets hurtled overhead and Black-headed Jays called noisily from the tops of trees. 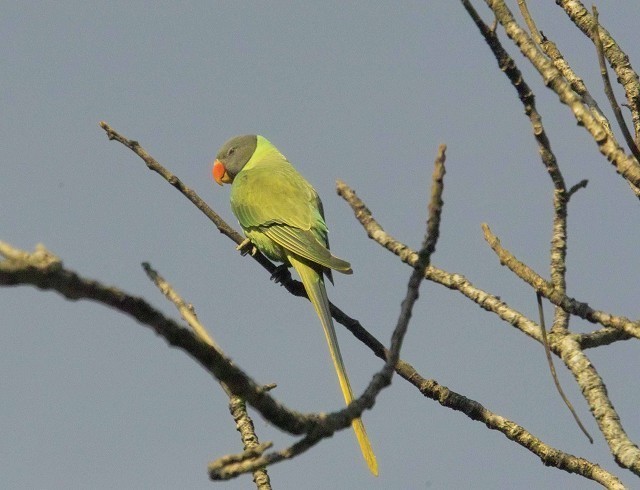 New species were coming so fast now that it was impossible to concentrate for any time on anything. Flocks of Oriental White-eyes, Pink-browed Rosefinches, Orange-gorgeted Flycatches, Himalayan Greenfinches, Rufous-bellied Niltavas, Black-throated and Rufous-breasted Accentors and Rusty-cheeked Scimitar-babblers: the names were so long that you had hardly time to call a bird before another appeared. We were mentally exhausted by the time we took a break. We enjoyed several walks in an area of forest by a lake and a small stream: this again was most productive.

The Himalayan streams are so full of interesting species. Apart from the familiar Common Kingfishers and Grey Wagtails, I was so impressed with the chats. Flitting everywhere on boulders and shingle banks were Plumbeous Redstarts as well as White-capped River-chats and Blue-fronted Redstarts perched in surrounding trees. The most stunning birds of all were the forktails: we managed three species in all — Little, Slaty-backed and Spotted — as well as Brown Dipper. At the same place we peered under thick vegetation to add Long-billed Thrush. 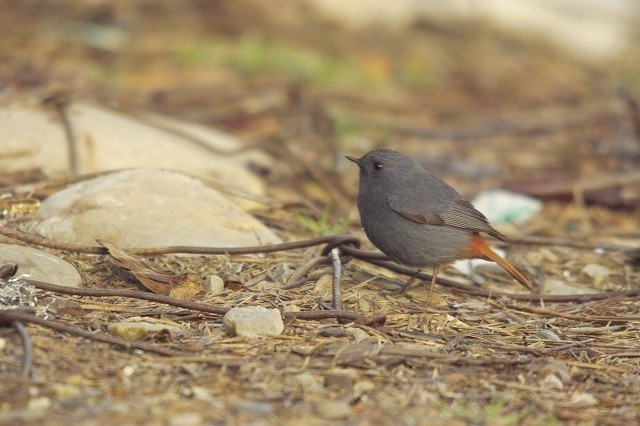 Moving into streamside vegetation we discovered Chestnut-capped Tesia and found Indian Nuthatches, Bar-tailed Treecreepers and Olive-backed Pipits in the taller trees. We sat a while by the stream again where many birds were coming to drink. This was extremely productive and within an hour we had seen Black Bulbul, Himalayan Bulbul, White-throated and White-crested Laughingthrushes, Blue Whistling-thrush, Red-billed Mesia, Green-tailed Sunbird, Yellow-bellied Fantail, Grey-winged Thrush, Eurasian and Black-headed Jay and Red-headed Laughingthrush. A Muntjac Deer drank at a nearby pool and a Mountain Hawk-eagle soared overhead. 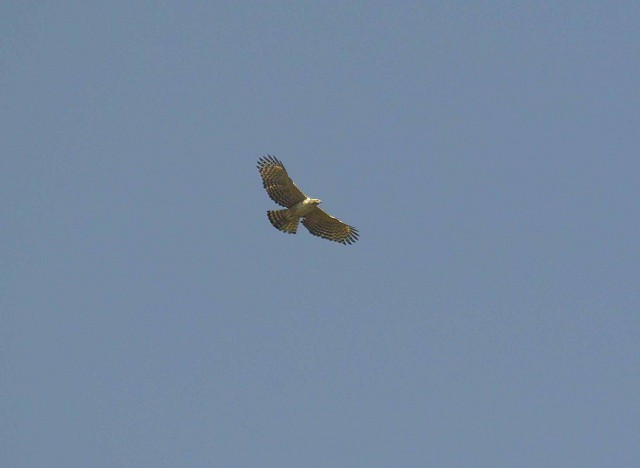 We stopped at lunchtime at another camp and the birds kept coming — Slaty-blue Flycatcher, Scarlet Minivet, Blue-throated Barbet, Mountain Bulbul and Red-flanked Bluetail made it difficult to concentrate on food. Other areas brought us much more — wonderful Kalij Pheasants, Great Barbets and Emerald Doves, all picked up by the roadside. 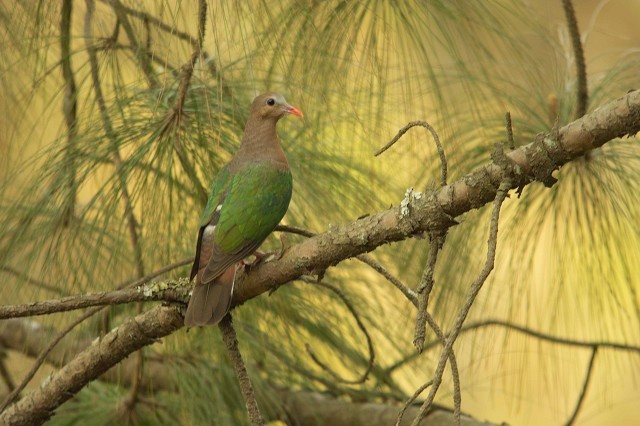 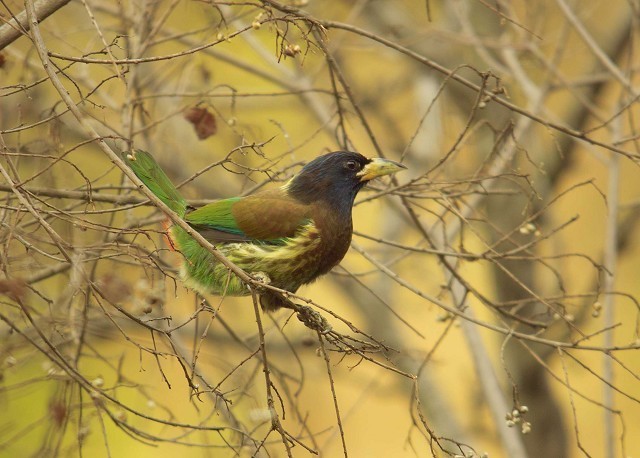 Eventually we moved up still higher to Nainital and beyond to Pangot. Here it was now very cold and the air very thin. A stunning early morning failed to find the elusive Cheer Pheasant but did produce Koklass Pheasant, Himalayan Griffon, Altai Accentors, Lemon-rumped Warbler, Buff-barred Leaf Warbler, Black-lored Tit and a flock of Dark-breasted Rosefinches. We did see an agile Goral gallop up a steep slope. We stopped for a while to take in the distant snow-covered tops of high peaks up to 26,000 feet and to admire the Rhododendrons (sadly not in full flower). What was stunning about the latter was their size: most were best described as trees rather than bushes. More walking produced Scaly-bellied and Streak-throated Woodpeckers, Mountain Chiffchaff, Great Tit, Russet Sparrow, Small Niltava, Rufous Sibia, Bronzed Drongo, Blue-winged Minia, Whiskered Yuhina, Striated Prinia, Chestnut-bellied Rock Thrush, Rock Bunting and Oriental Turtle Dove. 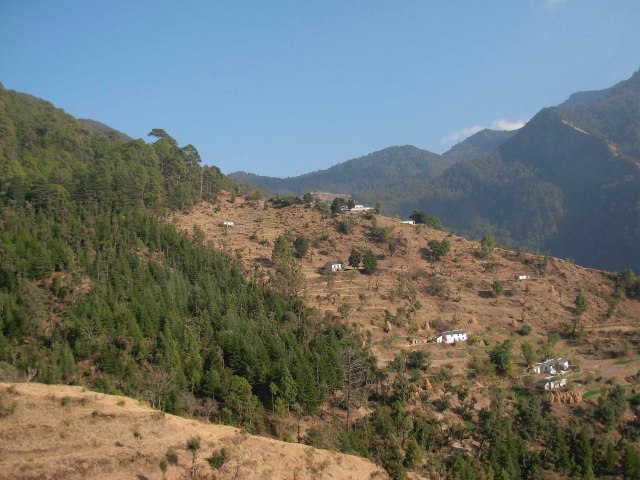 The last part of our journey would take us down again to Corbett National Park. The descent was welcome for me, as I had been suffering with pretty severe altitude sickness and I could only just manage to leave the bus to see a passing Lammergeier. Getting down lower, we stopped for a while at Corbett's House, where Nepal House Martins were overhead. In the afternoon we were soon checked in to the Tiger Camp Lodge.

We had booked one internal trip into Corbett National Park with an overnight stop at Dikhala. As soon as we set off, birds were obvious, with a Himalayan Flameback performing well in the parking area and Red-breasted Parakeets flying overhead. Moving on, we soon arrived the magnificent river within the Park. It was obvious looking down on the water that it was rich in fish species, and in the clear conditions we could see large numbers of Mahseer, a famous game fish from this area. With all that potential food, it was no surprise to find hundreds of Great Cormorants lining up along the banks. More exciting, perhaps, was the number of raptors also eyeing up the fish: Grey-headed and Lesser Fish Eagles were the most prominent, but Pallas's Fish Eagles were also present.

High overhead, Alpine Swifts, Asian Palm Swifts and Crested Tree-swifts performed their aerial manoeuvres in search of numerous insects. On beaches we noted a single Marsh Mugger and a group of Gharials before we headed off into the forest. We peered hopefully into the forest floor to get fleeting glimpses of Scaly Thrush, before enjoying a series of owl sightings: first the diminutive Jungle Owlet, followed by close views of Brown and Tawny Fish Owls. 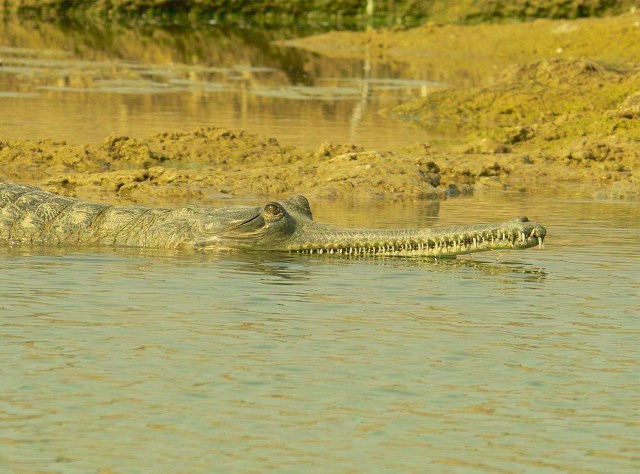 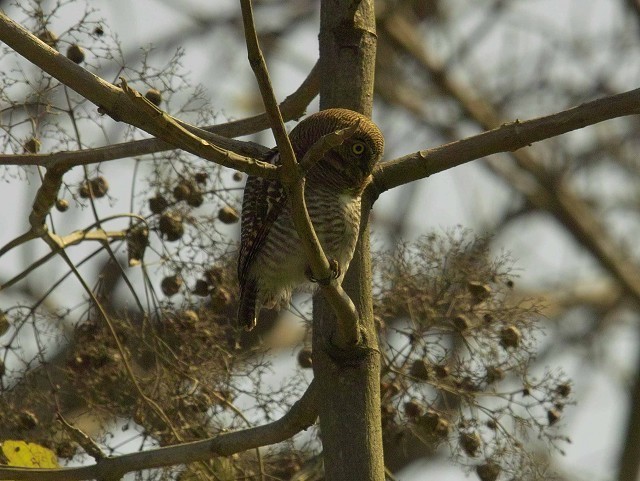 We eventually arrived at Dikhala and offloaded our bags. All the places we had stayed in so far had been excellent but this place, run by the Government, was very scruffy. I could not get one light to work in my room.

Before dark we had time to go out and do some birding. We drove around and across the extensive grasslands hoping we might meet a Tiger — no such luck, although we did find fresh tracks. Changeable Hawk Eagles, Hen and Pallid Harriers and Black-winged Kites were hunting the area and we spotted a tiny Collared Falconet on the top of a dead tree. A single Maroon Oriole was found and a Black-throated Thrush ran across the path in front of the vehicle; later we found lots of Spotted Deer and a few Hog Deer. Heading back to the lodge, we noted Oriental Skylarks, Long-tailed Shrike and the scarce White-throated Bushchat. 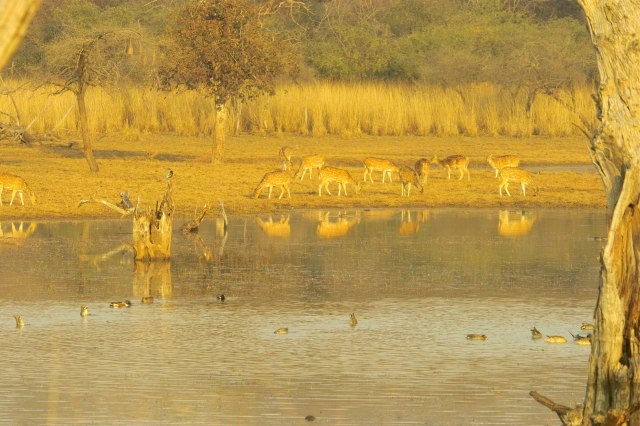 The next day we were moving out of the Park through the morning but we had plenty of time for birding. Around the Lodge, Spotted Doves were everywhere and a Lesser Yellownape turned up in the tallest trees. A quick scan of the grassland revealed several Black Storks flying over and the usual squadrons of Black-shouldered Kites.

We started the slow drive back through the forest, looking for birds on the way. A Black-crested Bulbul showed itself briefly and then we stopped for a while to watch the extraordinary Puff-throated Babbler feeding on the forest floor and turning over dead leaves like a Blackbird back home. As we approached some open grassland, again there was sense of excitement in our jeep. Rounding a corner we were confronted by a herd of Asian Elephants. Their progress through the tall grassland made good views difficult, but we saw at least a dozen including some small babies. 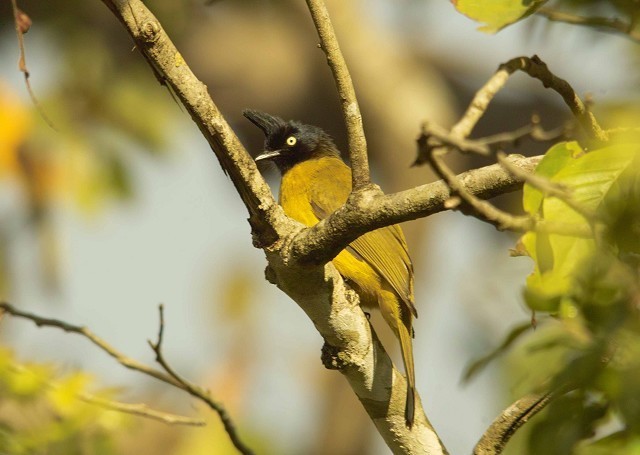 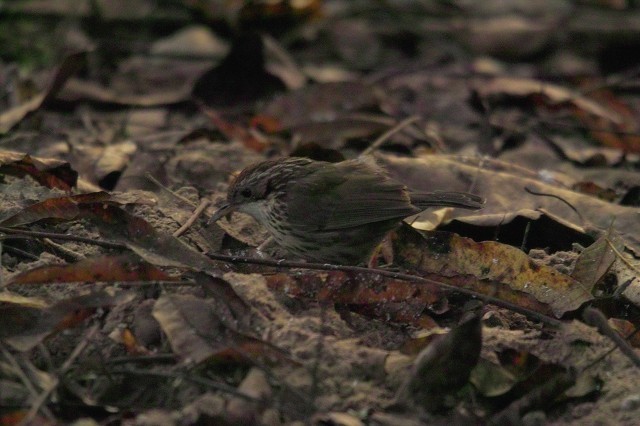 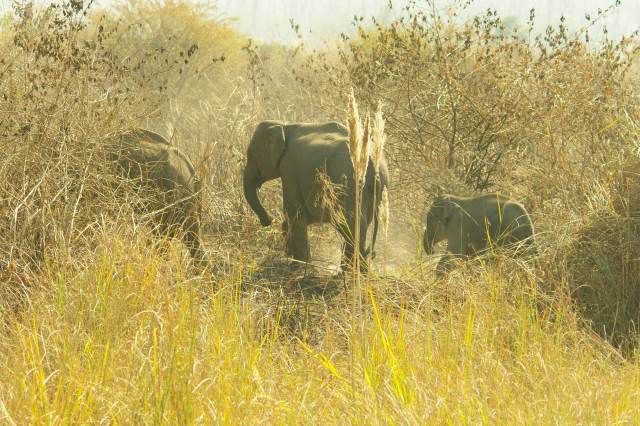 Looking up, Red-headed Vultures were overhead, and a superb pair of Pallas's Fish Eagles sat in a nearby tree. 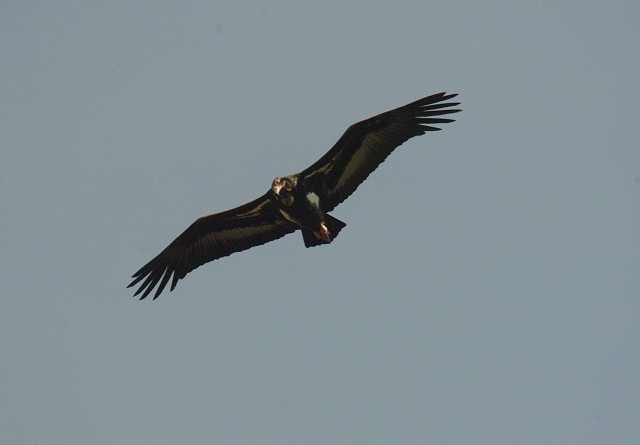 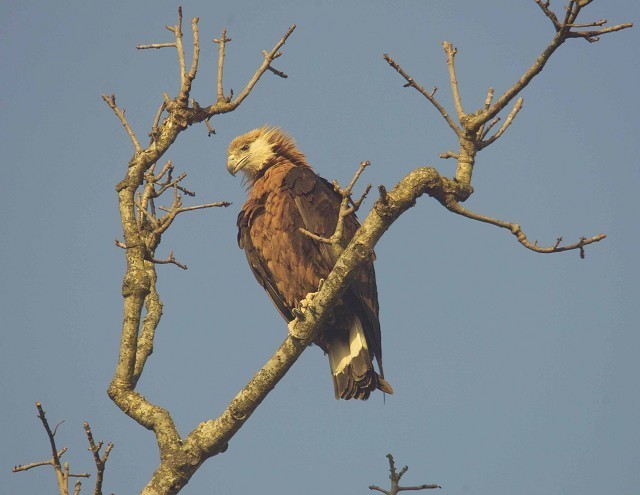 Over subsequent days we had tremendous birding opportunities in the buffer areas of the Park. These were mostly achieved simply by walking the minor roads, despite daily stories of a Tiger attacking locals quite close to our Lodge. In one case a young woman was killed; perhaps it was just as well that we never encountered a Tiger at Corbett.

The Kosi River was a favourite venue. Early mornings walking along the boulder-strewn shore produced plenty of birds. Himalayan or Crested Kingfishers were striking, as were Pied Kingfishers. Blue Rock Thrushes and White-browed Wagtails fed amongst the boulders, but more surprising was the sight of Wallcreepers uncharacteristically hopping amongst the large stones searching for insects. All of this was so exciting, and only topped by finding that exotic-looking wader the Ibisbill. Here many threw caution to the wind and walked in the freezing water to obtain decent photographs. 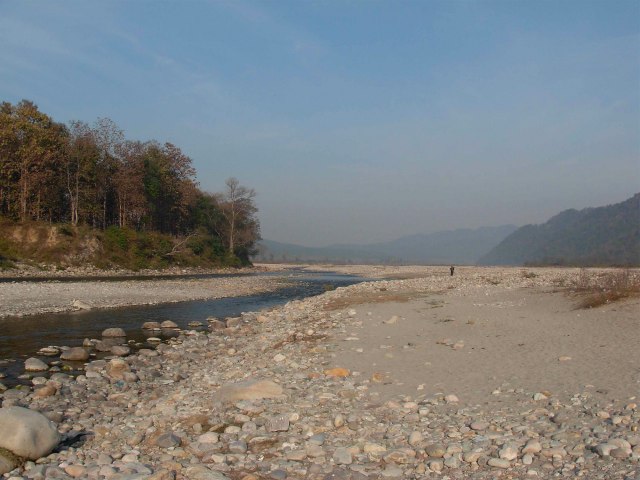 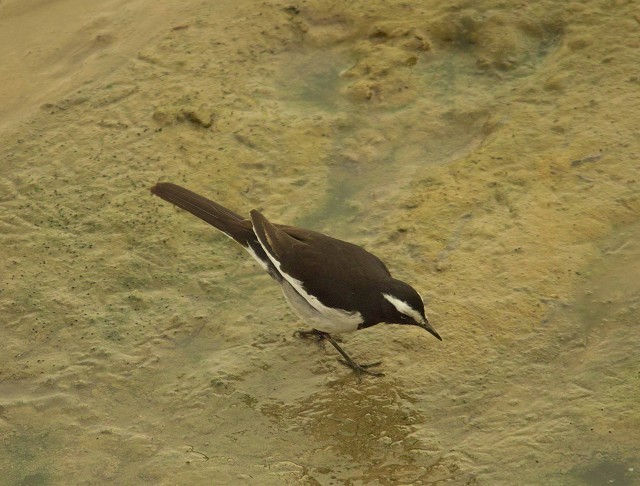 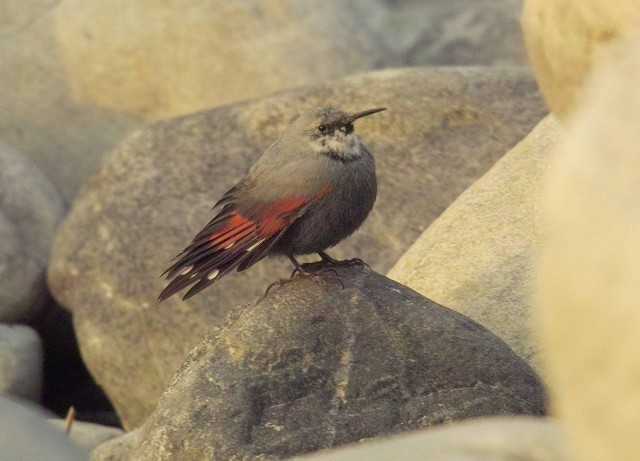 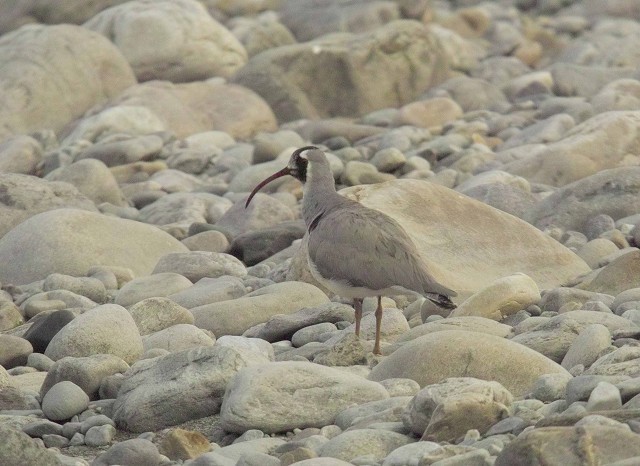 On other occasions we walked along forest roads finding much more. A Blue-bearded Bee-eater was a good find, as were Ashy Bulbul and a Common Green Magpie. Flycatchers were very noticeable and we spent some time watching both Taiga and Canary-headed Flycatchers at the roadside. A large group of Spangled Drongos also provided excellent views and we picked a Black-hooded Oriole and a Orange-bellied Leafbird with a lot of neck stretching. 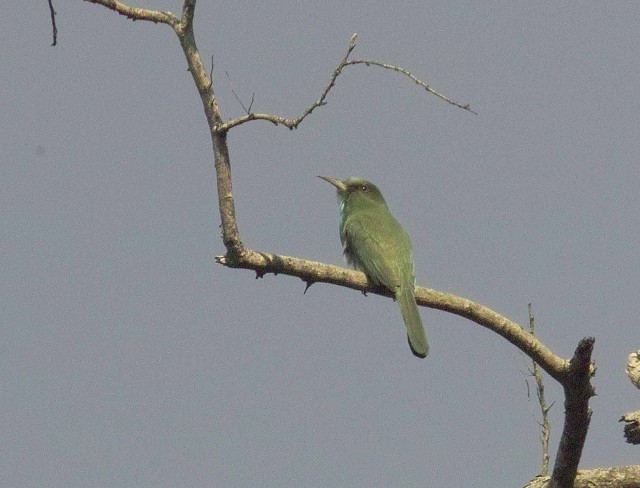 In other areas we had reasonable views of Red Junglefowl and noted Streak-throated Swallows and a Cinereous Vulture. In village gardens we found Asian Pied Starlings, Brown Shrikes and Indian Grey Hornbills. In the surrounding forest we also found Grey Treepies, Lineated Barbets, Asian Pied Hornbills and the enormous Great Hornbill. 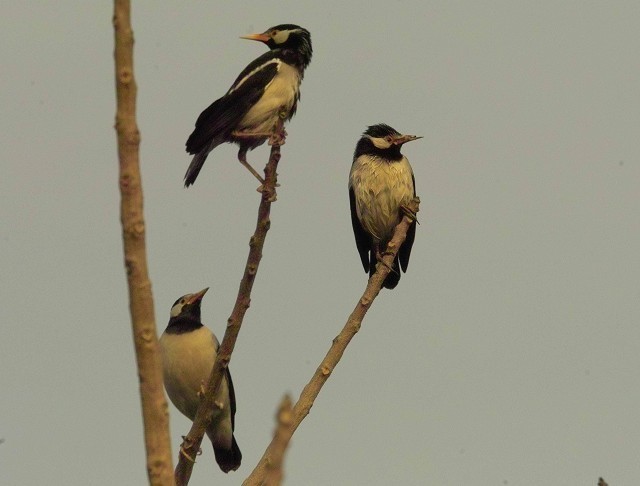 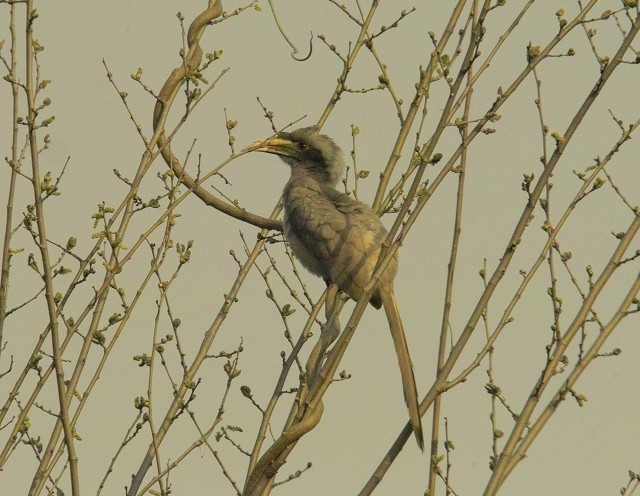 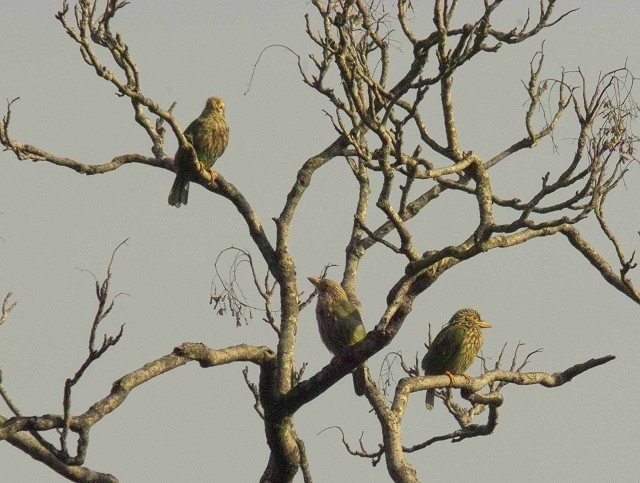 You can imagine we were all quite sad to realise suddenly that the next day would see us heading back to Delhi for the flight back to the UK. En route we astonished a whole village when we stopped to get really close-up views of a pair of Sarus Cranes, and as we approached Delhi we marvelled at tens of thousands of Black Kites going to roost.

The adventure was very productive as we had seen over 380 bird species and enjoyed wonderful views of Tigers and Asian Elephants. We had also seen a great deal of Northern India. I took a long time to get to India but I am certainly not going to wait long for a return visit.

Derek is leading a tour to India next year to coincide with the Cricket World Cup, taking in the India v England match (amongst others). You can see the itinerary here.