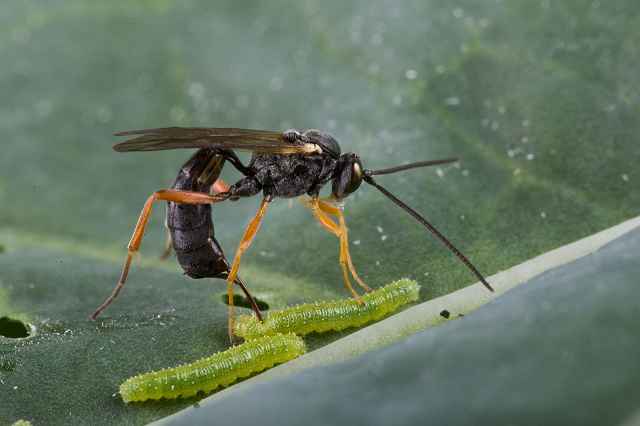 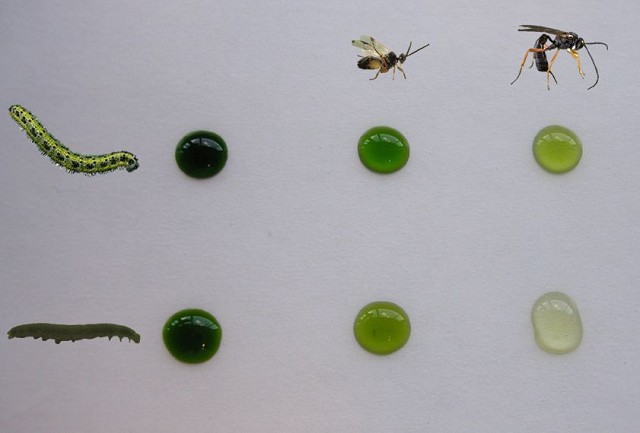 Saliva from caterpillars of the Large White (top row) and the Small White (bottom row). The caterpillars were uncolonised (left) or colonised by either Cotesia glom era (middle) or Hyposoter ebeninus (right). The colour of the saliva differs depending on the caterpillar and the species of parasitoid that attacks the caterpillar (Erik Poelman).

The research carried out at the Universities of Wageningen and Rennes (Netherlands and France, respectively) shows that parasitic wasps that infest cabbage white caterpillars do not only kill the caterpillars but also, though the altered response of the plant to the caterpillars' saliva, render the cabbage plants less attractive to the Diamond-back Moth.

Diamond-back Moths throughout the world have become resistant to many insecticides and there is an urgent need for alternative pesticides. In the UK, the Diamond-back Moth is well known for its migratory tendencies. Sometimes many thousands can appear during the night at coastal migration watchpoints. In the case of cabbage whites, biological pest control gives the cabbage plants extra protection against Diamond-back Moths. Researcher Erik Poelman calls this a spectacular discovery, and adds: "This could help us to develop an environmentally friendly way of protecting cabbage plants from Diamond-back Moths."