After a May that most butterfly and moth recorders would agree was best forgotten, June 2021 provided a welcome relief, with a rise in temperatures, a drop in rainfall, and an increase in moth and butterfly activity across the country. The effects of the spring washout were still felt by many, though, with delayed emergences and lower numbers for many species as the uptick in numbers and diversity in moth traps mostly failed to compensate for the poor start to the year for many garden year lists.

With low catches, and virtually no migrant activity, there was scant lepidopteran interest to write home about in May. Committed garden trappers garnered a few good micros with the conifer-feeding colonist Gravitarmata margarotana new to Essex in Colchester on 11th, while Pammene trauniana seems to be continuing its resurgence with the second record for Buckinghamshire near Aylesbury on the 17th. As in March and April, pheromone lures for under-recorded micros also featured, particularly the FUN and MOL lures for the mysterious ash-feeding Pammene suspectana. This was new to Bedfordshire at Eaton Ford on the 12th, Suffolk at Brandon on the 24th, Herefordshire on the 10th and Lincolnshire at Skellingthorpe Woods mid-month, while there were also records from Norfolk, Huntingdonshire and Nottinghamshire. Records of this species at lures continued into June as well, although the second and third for Somerset (in the Quantocks on 1st and along the Avon Gorge on 10th) were both at light. 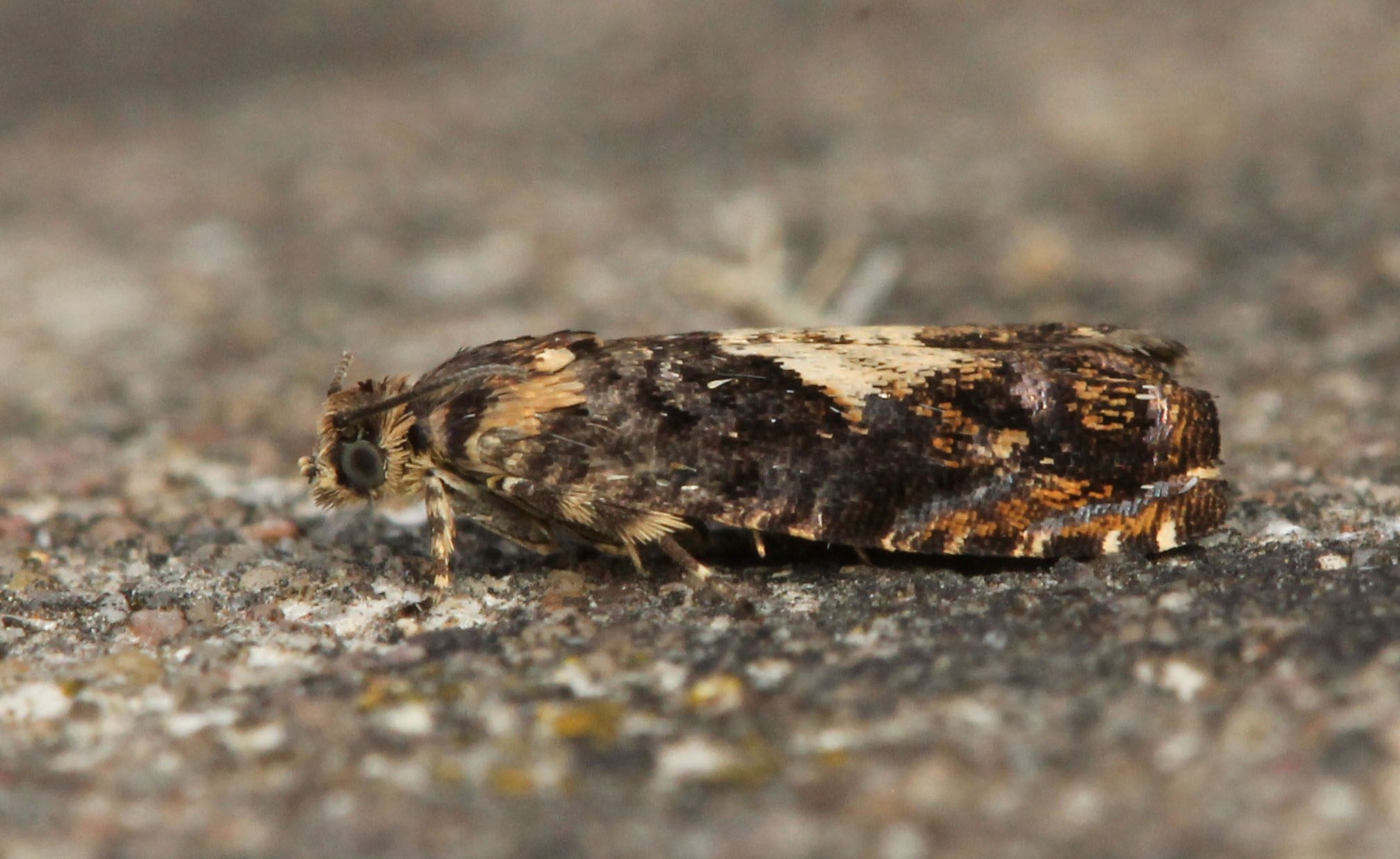 Although June provided a welcome improvement in moth numbers, generally speaking, it was a quiet period for moth immigration, with just a couple of spells of warm southerly air at the start of the month (from 2-5th) and mid-month (on 11-12th) as mild Azorean air moved up from the south-west. These didn't bring any obvious large arrivals from further south, with a steady trickle of migrants instead appearing throughout the month. Striped Hawkmoths were recorded in reasonable numbers, perhaps representing a mixture of fresh migrants and the offspring of the few pioneering individuals recorded earlier in the spring. As well as the usual scatter along the south coast (seemingly mostly in the west) there were records further north at St Albans, Hertfordshire, on 2nd, Woodmancote, Gloucestershire, on 4th, Risca, Monmouthshire, on 5th, and Roberts Cove, Co Cork, on 6th, while one in Aylesbury, Buckinghamshire, on 10th was the sixth county record. 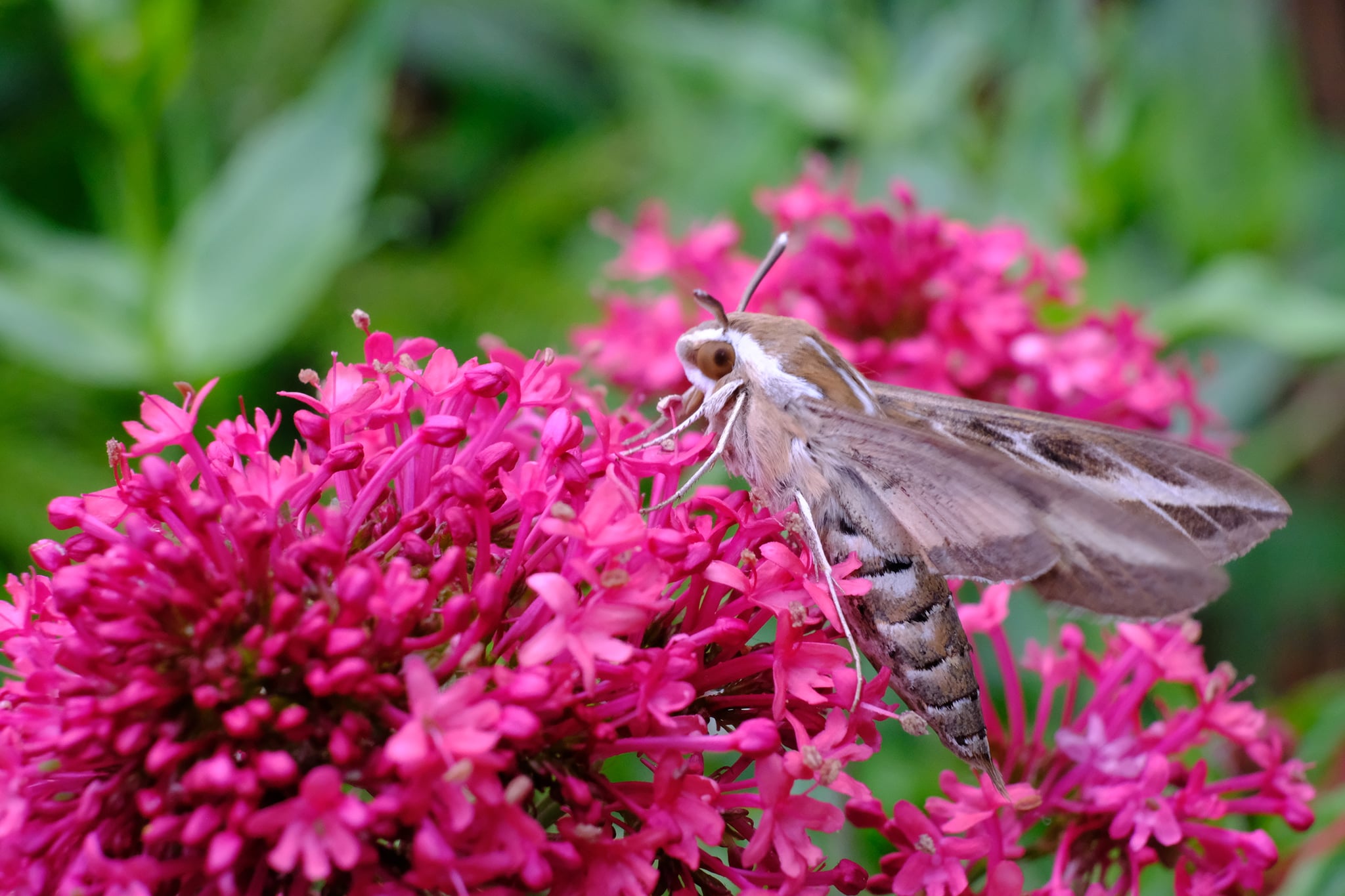 Alongside the Striped Hawks came smaller numbers of their migrant relatives, with a single Spurge Hawkmoth at Brightlingsea, Essex, on 5th, and a couple of early Convolvulus Hawkmoths in Norfolk and Cornwall on 5th and 18th respectively. Small numbers of some other regular migrants were recorded too, with a handful of Bordered Straws along the south coast, as well as two records of both the pyralid Loxostege sticticalis in Dorset at the start of the month (at Upton on 2nd and Weymouth on 7th) and Porter's Rustic at the month's end (Bonchurch, Isle of Wight, on 28th and Portland, Dorset, on 30th). 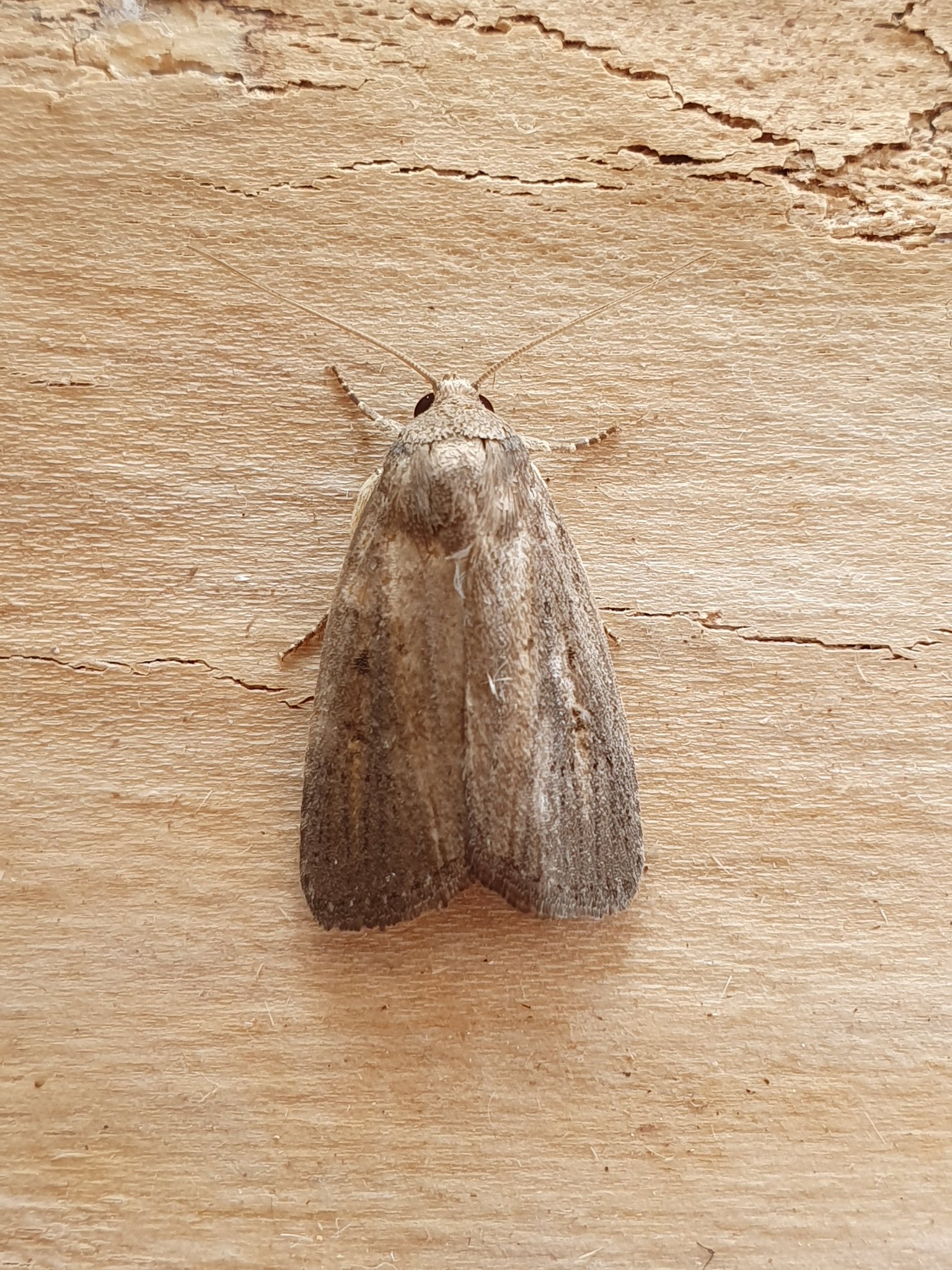 Bonchurch garnered another good record in June, with a fantastic Lunar Double-stripe coming to one lucky recorder's trap on 3rd. Perhaps more surprising was another inland at Ipswich, Suffolk, on 9th. Not far away at Elmham, Norfolk, on 29th a migrant Rannoch Looper was a good record too, only the second in the county in the last decade after it missed out on the 2011 influx. 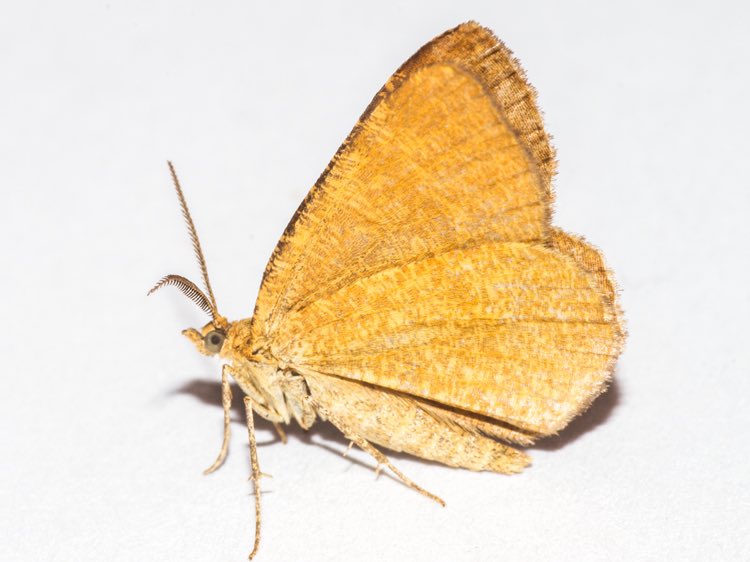 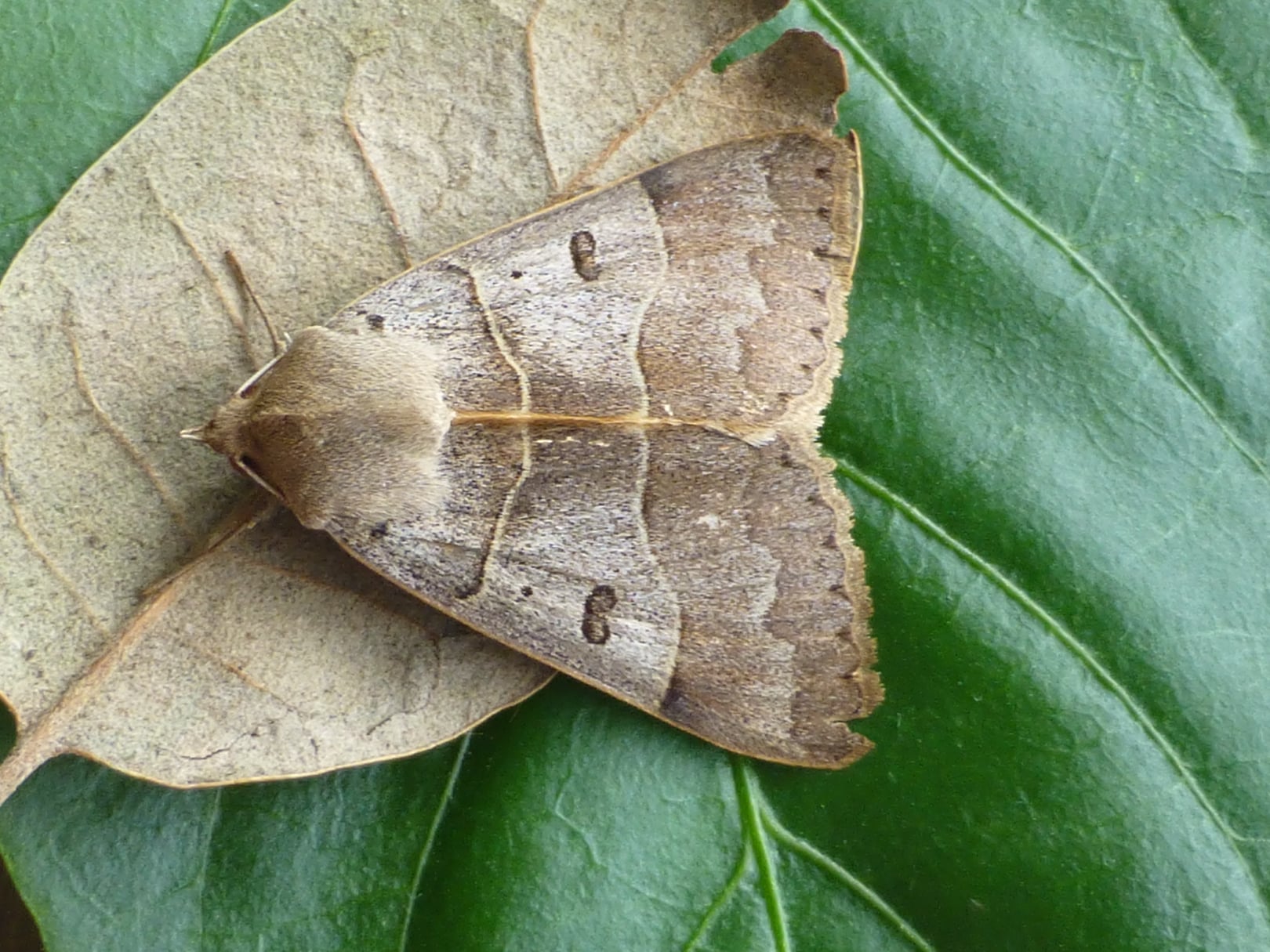 A Dusky Hook Tip came to light at Wakes Colne, Essex, on 10th – just the 13th county record of a species that certainly seems to be on the up in the south-east. Nearby, a Portland Ribbon Wave at Great Holland Pits on 21st was cause for further excitement and appears to be the first for the county. Two other migrants constituting good county records were recorded, with Silver Barred (Portland Bird Observatory, Dorset) and Zelleria oleastrella (Etchingham, Sussex) both second county records. 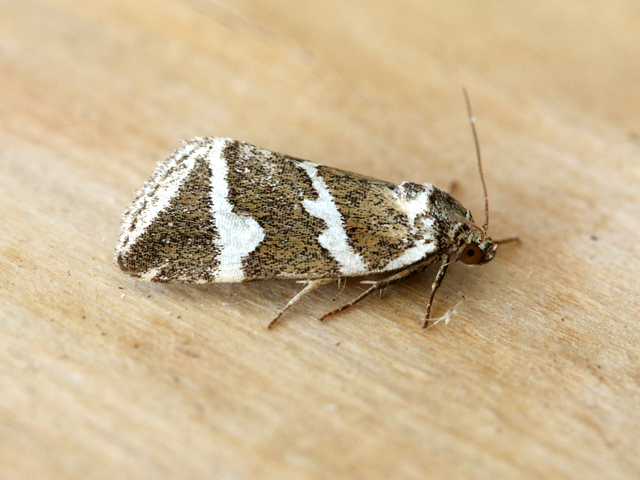 Portland also chalked up three Beautiful Marbled over the course of the month, all fresh specimens in the north of the island with none at the observatory where most migrants are caught. Similarly, a pair were caught at Plodland, Kent, on 15th, while two different individuals were caught at Bawdsey, Suffolk, on 2-3rd, followed by another pair on 18th and one nearby at Hollesley on 17th. These sets of records suggest the exciting possibility that small colonies of this once mythic rarity have survived the winter and it may now be establishing itself after last year's strong showing and increase on the Near Continent. Away from these areas, records were scattered across the coast in the south-east, with several also found inland including at Sturminster Marshall, Dorset, on 17th and Croydon, Surrey, at the end of the month. 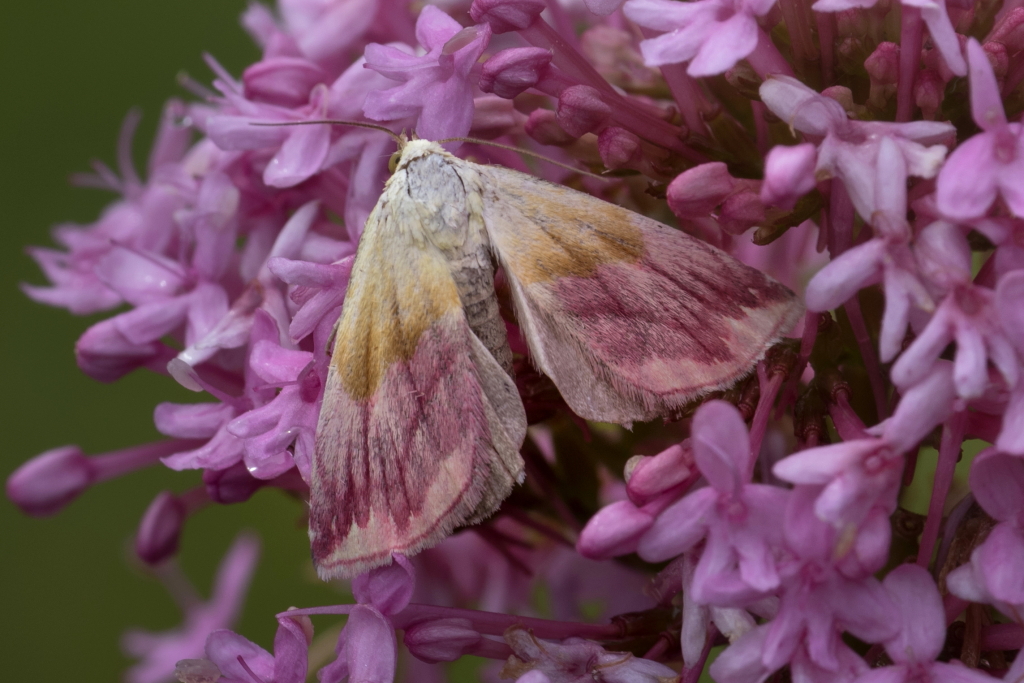 Remarkably, after first being recorded in Britain at Weymouth, Dorset, in 2017, the pretty southern European Cochylid Aethes deaurana also appears to be in the process of colonising, recorded again this spring at Dawlish Warren, Devon, after the first county record there last year, while breeding was also confirmed in the area of the original record near Weymouth. 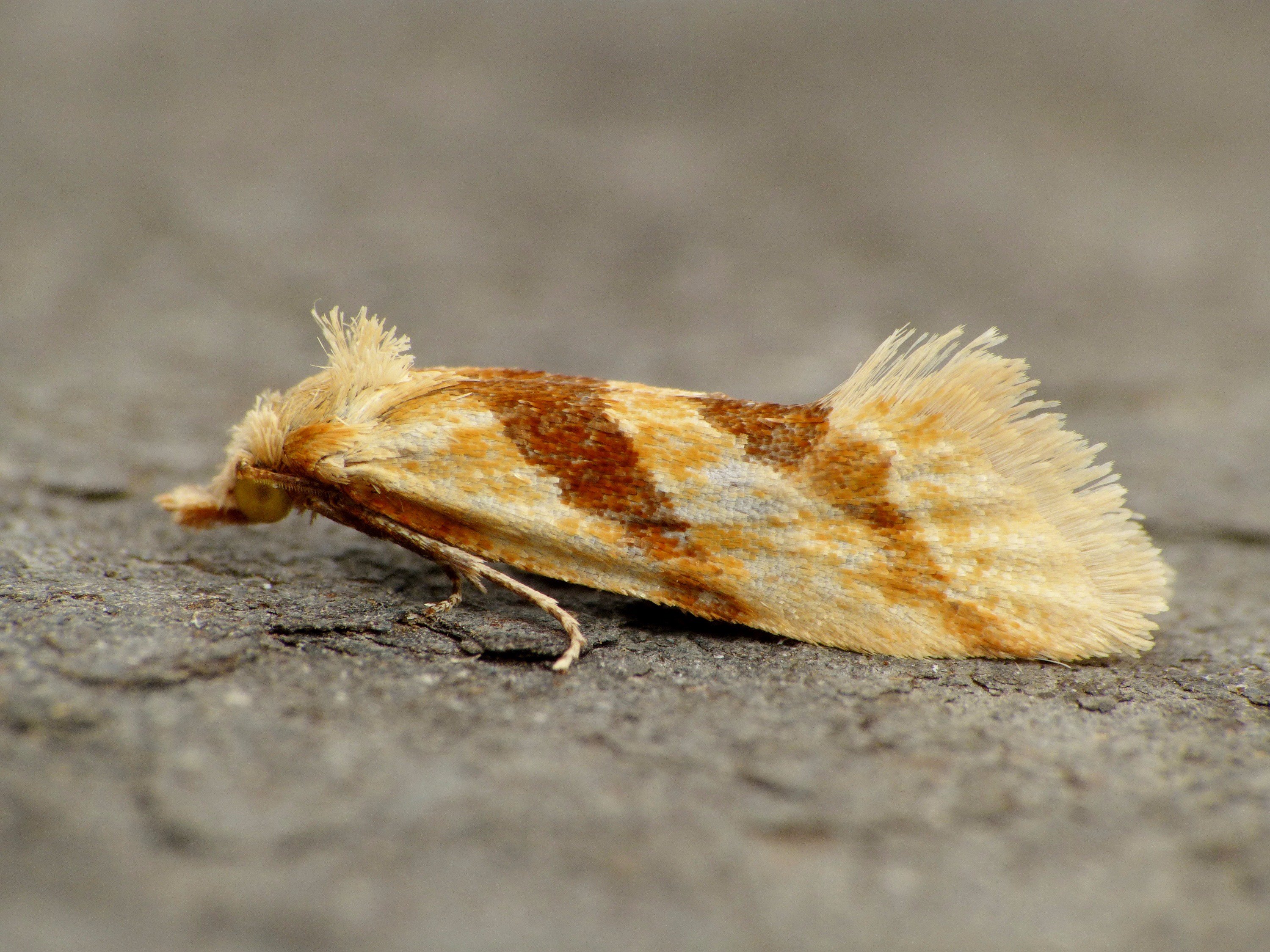 Other colonists on the march in June included Pachyrhabda steropodes which crossed the Tamar from Devon into Cornwall, with adults recorded flying around Soft Shield Fern at Edgecumbe Country Park at the start of the month. Similarly, the lovely Cydia interscindana was recorded again in newly colonised areas in Essex (Dagenham on 14th) and Buckinghamshire (Denham on 19th) as well at the source in Surrey (Dulwich on 10th and Weybridge on 14th).

It wasn't just introduced species with itchy feet, with a number of rarer residents turning up in new places. One of the most spectacular examples of this in the last couple of springs has been Narrow-bordered Bee Hawkmoth. Having declined and been lost from much of its former range in the east of England – to become a conservation priority – this species has appeared at many new sites in its strongholds and excitingly, begun to reclaim some of its former range. In Gloucestershire, it was recorded again at Cleeve Hill after returning to the Cotswolds there in 2019, and found for the first time at the Bill Smiley Reserve on 4th as well as being seen at Prestbury Hill on 5th. Further east, it was recorded again in Oxfordshire (after the first for many years last year) at Thrupp on 1st, before a strong colony was found breeding on the Otmoor ranges on 7th. Continuing east, it was also found near Chiddingfold, Surrey, on 8th, with another wandering individual at Marlow, Buckinghamshire, on 12th – the first county record since the 1950s. Bee Hawks weren't the only macros on the up in June though, and Devon Carpet continued its push northwards with the first for north-west Yorkshire (VC65) on 15th, while Little Thorn also continued to advance westwards, with more records from West Cornwall and further expansion north and west in Wales. 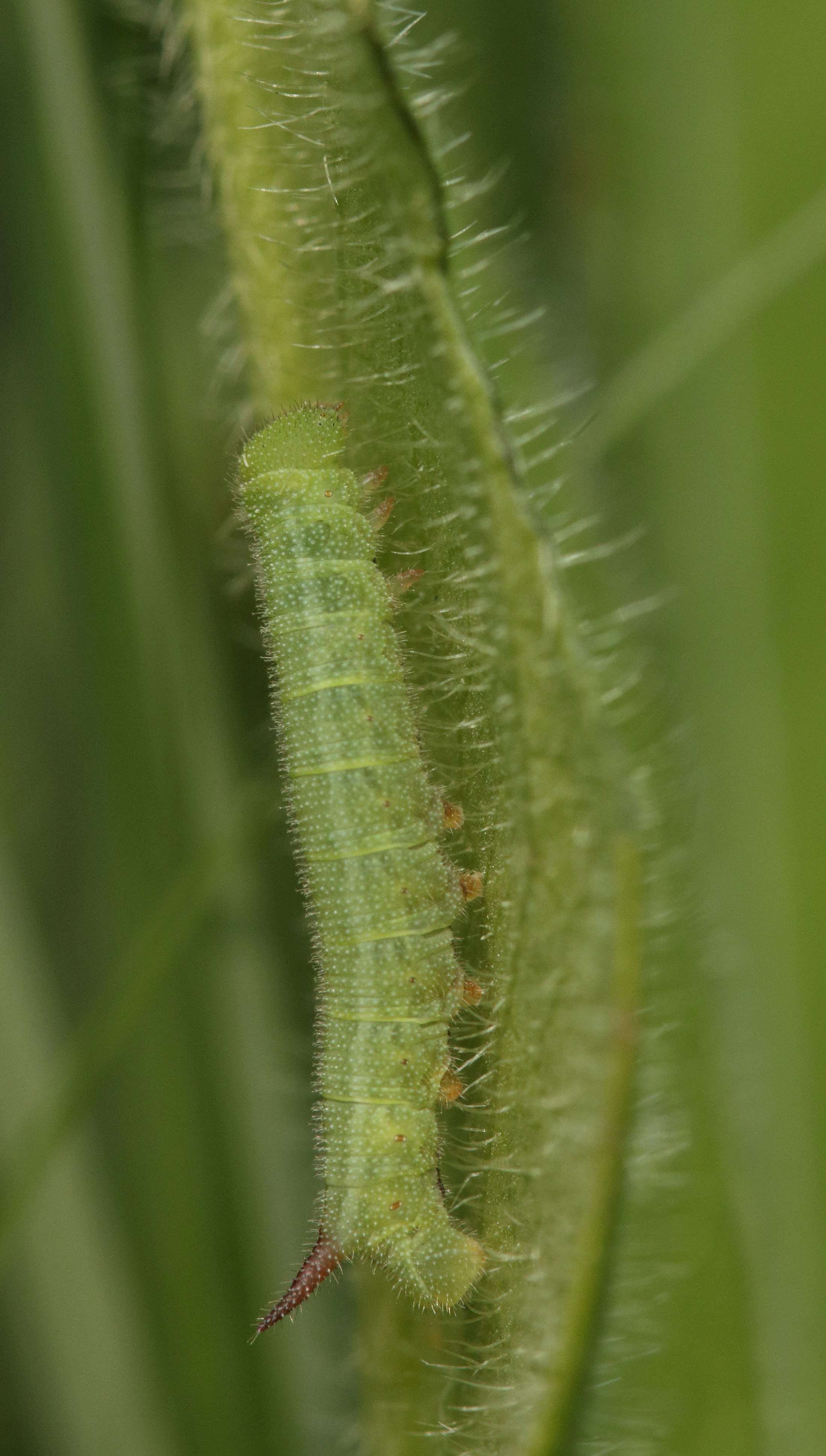 At the smaller end of the scale, the beautiful Crambid Agrotera nemoralis was also found in a number of new areas in June. Formerly restricted to a small area of Kent as a breeding species, it is now probably also resident on the Isle of Wight and in south-east Cornwall, and was also recorded at Romsey, Hampshire, on 4th, Hollesley, Suffolk, on 26th (where it was the fourth county record), and in Essex at Belfairs (on 2nd – the third county record) and Hazeleigh Wood (on 10th). The latter follows a record at the same site last year, suggesting it may well be established here too. Other assorted micros on the move in June were Coleophora conspicuella (continuing its expansion in the south-east with a second Suffolk site at Cavenham Heath on 13th), Cosmopterix lienigiella (new to Yorkshire at Tophill Low on 18th) and the colonist Cydia inquinatana (seemingly new to Essex on 24th). Phtheochroa schreibersiana continued its resurgence, being new to both Worcestershire and the West Midlands at Warndon on 14th. 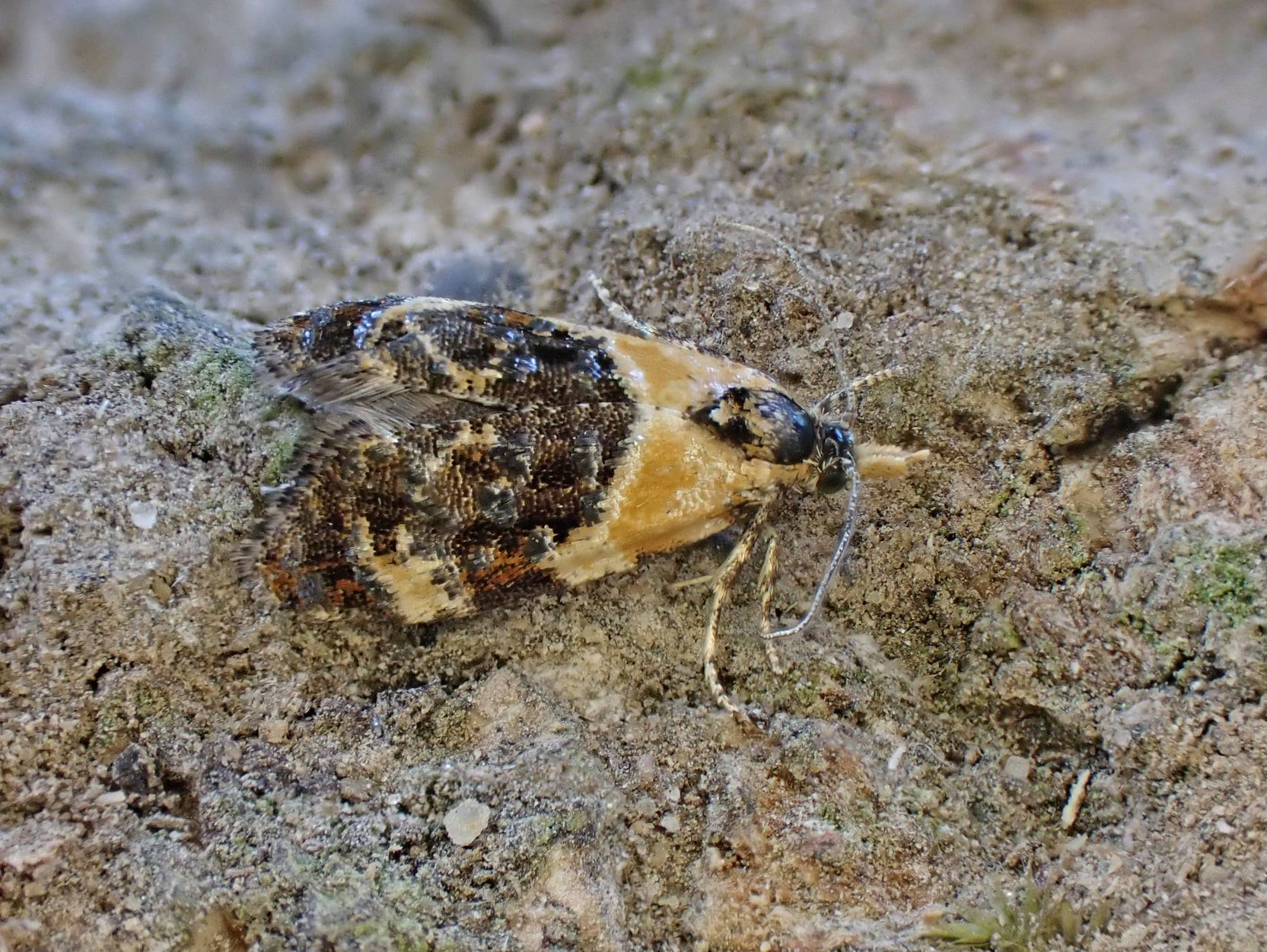 Dedicated recording also turned up a few good records of scarcer micro moth species at new sites where they have previously been overlooked. In Glamorgan, Aethes williana at Lavernock Point was just the second Welsh record of this subtle Wild Carrot feeder, while its scarce relative Gynidomorpha permixtana was discovered new for Cornwall, with a strong colony at Gwithian Green on 9th. In Essex, the rare larch feeder, Cydia milleniana was new to the county at Boreham on 10th, while the related Cydia pactolana was just Dorset's second record at Gordon Gorse on 11th.

Following the spate of Pammene suspectana records in May, there was more good pheromone by-catch in June. As the LUN lure came out for Lunar Hornet later in the month, so too did records of the rare Tineid Triaxomasia caprimulgella, with one in Reading on 25th – just the second Berkshire record. Another good Tineid record was of Morophaga choragella in Ripon on 29th, where it was new for north-west Yorkshire (VC65), while the tiny and rare Tenaga nigripunctella was recorded again in south Dorset at Litton Cheney (on 13th) and Abbotsbury (on 24th) after its rediscovery there a few years ago following a gap of 60 years in British records. Other good odds and ends among the micros included the rare Gelechiid Pseudotelphusa paripunctella new to Suffolk at Brandon on 16th, Epiblema turbidana new to Glamorgan flying over Japanese Butterbur in Cardiff on 15th and a reminder that leafmine season is beginning from Acrocercops brogniardella new to mid-west Yorkshire (VC64) at Fountains Abbey at the end of the month. 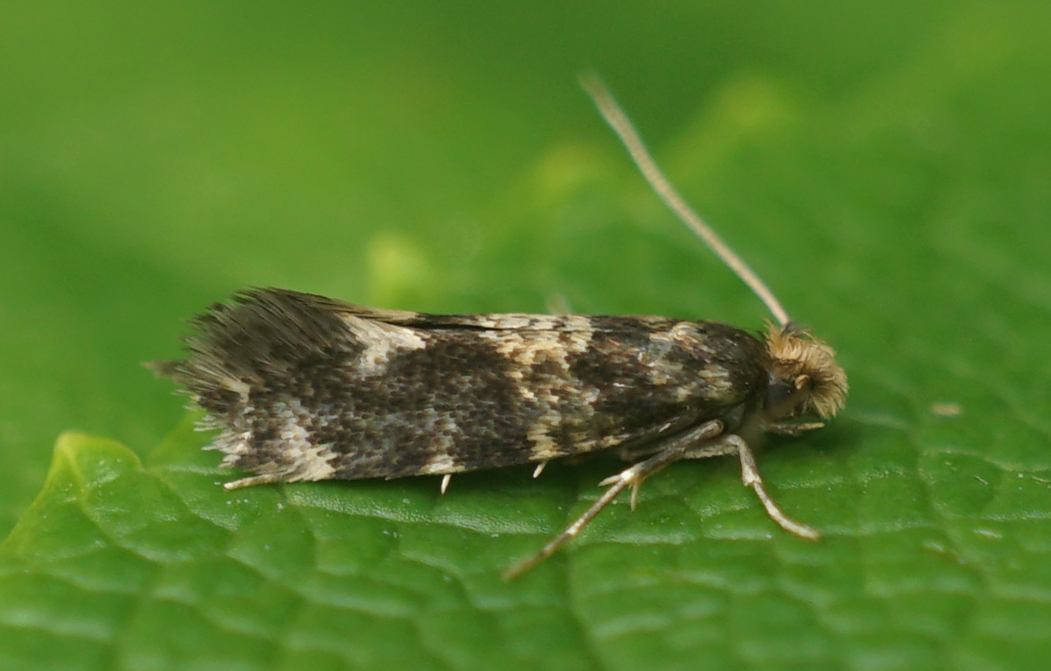 From dedicated recording to dedicated conservation, there was also some good news for several rare moth species in June. Scarce Blackneck has recently been upgraded to a priority species by Butterfly Conservation courtesy of its restricted range, and the lack of recent records, but survey work in Devon and Somerset mid-month turned up good numbers of larvae and foodplants at three sites where it was last recorded in the 1990s. White-barred and Large Red-belted Clearwing have also been upgraded for similar reasons, and the former seemed to have a good spring with a number of new sites found, including in North Hampshire on 10th. Further east, Sussex Emerald also made headlines after (bizarrely!) the first-ever larvae for the eponymous county were found, with two on the Wild Carrot at Rye Harbour on 7th following a number of adult sightings last year. 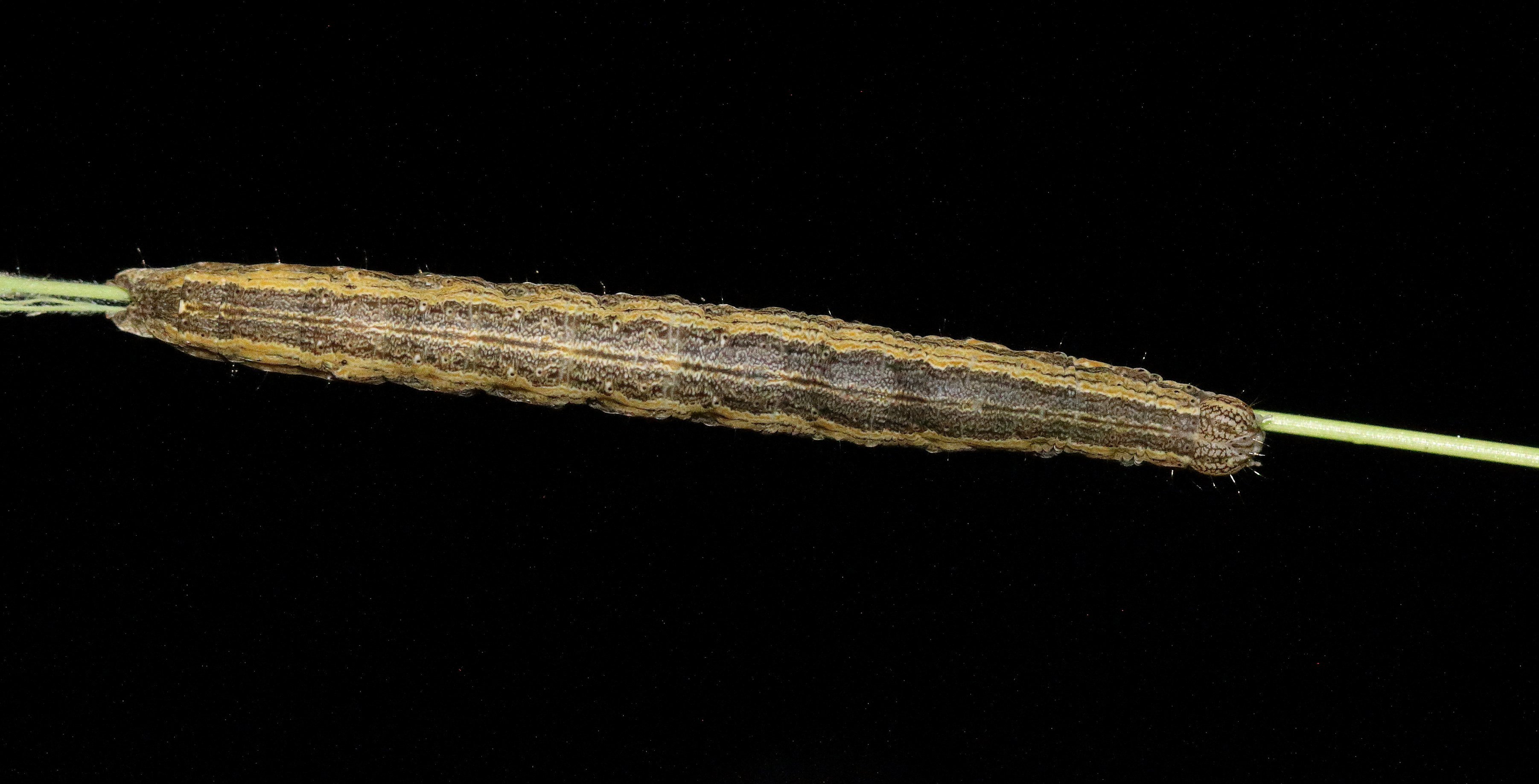 With the usual gap and the poor spring, June provided little in the way of excitement for most resident butterflies, and it was a quiet one for migrants too, with an early Queen of Spain Fritillary in Eggringe Forest, Kent, on 24th, but very few reports of Clouded Yellow or Painted Lady.

The month will perhaps be most remembered by butterfliers as the one in which the Large Tortoiseshell really started to re-establish itself in Britain. After an old larval web was found on Portland, Dorset, last spring, breeding was proven here again, with two webs of magnificent freshly moulted final instar larvae found on 8th.

Perhaps even more excitingly, the butterfly appears to have established itself elsewhere, with late news of the remarkable sighting of an egg-laying female on the National Trust's Sheringham Estate in Norfolk earlier in the year released at the start of the month (see here), and another old larval web found in East Sussex on 20th.  For those already looking ahead to tracking this species' expansion next spring, some discussion of breeding on Portland is available here, describing the specifics of the larvae and their webs – a sight that will hopefully become much more common as this wonderful butterfly re-asserts itself in the south-east. 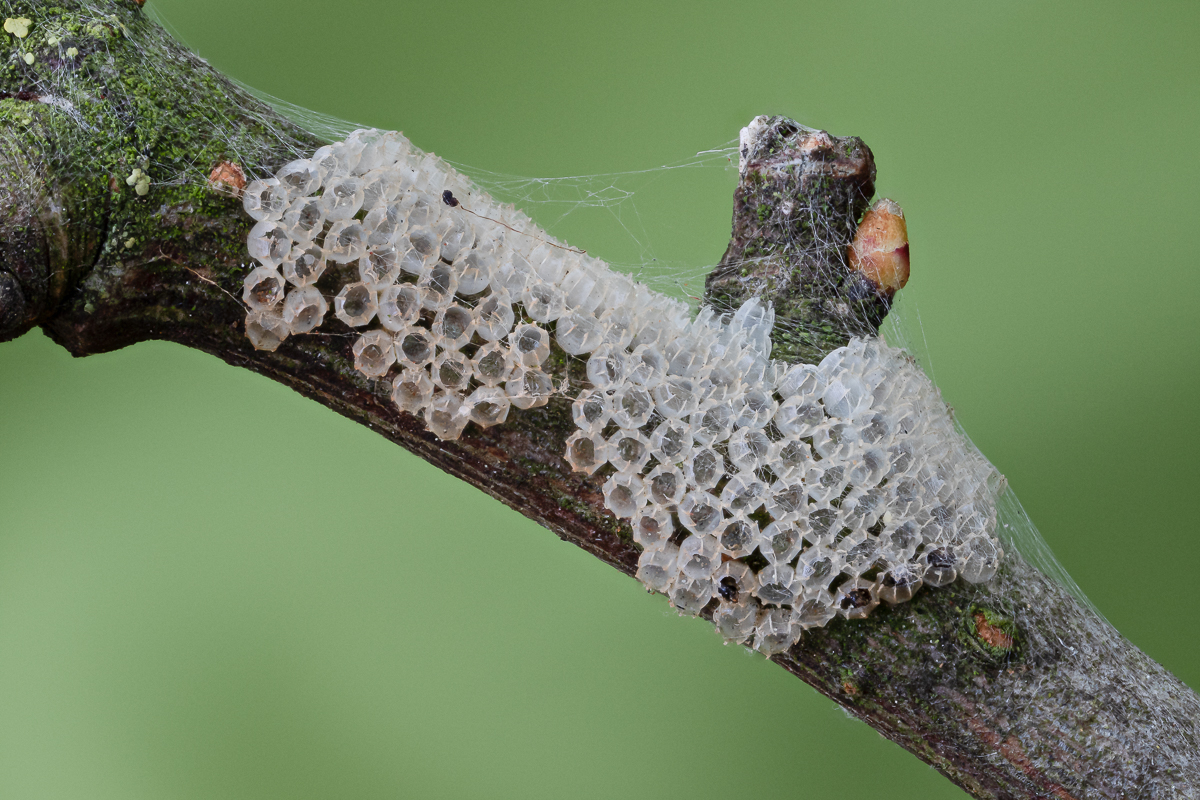