A new study has revealed the impact of wind farms on Dupont's Lark populations in central Spain.

Dupont's Lark is a notoriously shy species which is difficult to observe well. It is found across North Africa and Spain, and is considered Near Threatened. It is a short-distance disperser, with some studies suggesting that adults may not disperse more than one mile. Therefore, habitat fragmentation has the potential to isolate populations of the species, with subsequent human activities and habitat degradation having the potential to drive local extirpations.

The species' Spanish populations have declined considerably in recent decades, with these same reasons, along with reforestation and wind farm construction, all cited as driving factors, although the impact of the last has not previously been quantified.

The study evaluated the effect of wind turbines on occurrence, abundance and population trends of Dupont's Larks in the Tierra de Medinaceli region, near Soria, north-central Spain. Assessing data surveys of 14 local populations of the species (five of which were near wind farms) over the 2008-2016 period, trends were assessed using modelling techniques.

The results revealed an overall negative trend in Dupont's Lark, but the popualtion decreases were much more significant for those in the presence of wind farms: on average, a 21 per cent annual decline was noted if wind farms were nearby, compared to an average 5 per cent annual decline when absent. The researchers concluded that lark occurrence and abundance in 2016 had been negatively affected by population isolation, often caused by habitat loss or fragmentation and the presence of wind farms.

The results suggest that wind farms are an accelerator of declining population trends among Dupont's Larks in Spain, and are a cause for conservation concern. Analysis of population structures led to the conclusion that a 2-mile threshold distance was needed for Dupont's Larks to be unaffected by turbines, and the researchers recommend that this figure is taken into account when planning is undertaken for future wind farm projects within the species' range. 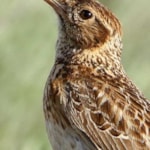