Palm-nut Vulture is a peculiar species in its own right, with its unusual diet including palm nuts among a wide variety of prey, and an affinity for aquatic environments. It is thought that Palm-nut's diverse ecological characteristics are likely behind the reason that it is one of just two of Africa's 11 vulture species that isn't classified as Threatened.

The new research was conducted in the João Vieira and Poilão Marine National Park, located in the Bijagós Archipelago, Guinea-Bissau, where marine life is abundant and, seasonally, large numbers of Green Turtles come ashore to lay their eggs. The density of vultures is particularly high in the park, leading the researchers to speculate that they were eating more than just palm nuts.

Monitoring the vultures' behaviour, the team found that, as soon as the intertidal area became available, vultures arrived from the forest and landed there. The number of individuals increased on the falling tide and the opposite happened when the tide rose. However, it was not clear what the vultures were doing. They rarely walked, and only on a few occasions were they observed eating stranded fish. Other individuals were observed flying out to sea, where they attempted to catch fish.

To test whether the vultures preferred palm nuts or fish, the team performed five 'cafeteria trials' by leaving one pile of palm nuts and one pile of fish on the intertidal area. The results left the team amazed: the vultures repeatedly chose fish over nuts. Furthermore, other vultures were observed flying with crabs in their claws, and also taking Green Turtle eggs and hatchlings.

The team then analysed the vultures' diet by calculating the frequency of occurrence of each prey item in remains found under nests, and by analysing the relative proportion of palm nuts, fish, crabs and Green Turtles. Crabs and palm nut pellets were the most frequent items found, with a frequency of occurrence of 69 per cent and 34 per cent respectively. Using stable isotope analysis, the team was able to establish that Poilão's vultures consumed a much greater proportion of Green Turtle hatchlings or eggs than vultures from other islands in the Bijagós Archipelago, and that crabs were the second-most-important food item there. On the other islands, fish took the turtles' place. Palm nuts were consumed at a consistent rate, accounting for around 45 per cent of diet across all islands.

The results demonstrate the adaptability of Palm-nut Vultures to their surroundings, which presumably explains their relative success when compared to other African vulture species, many of which are suffering large-scale and rapid declines. 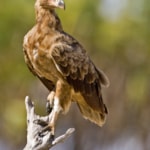