A new study has demonstrated how gadly petrels use an innate knowledge of oceanic wind patterns to optimise their foraging trips.

Gadly petrels, the genus Pterodroma, are among the most iconic of seabirds and routinely cover some of the longest distances known of any animal.

How they decide on routes and destinations for foraging trips remains poorly understood, but it has been widely assumed that the birds visit memorised feeding areas repeatedly. However, the new findings suggests otherwise. Using GPS tracking data, researchers investigated the role of wind in the flight behaviour and foraging strategy of Desertas Petrels. 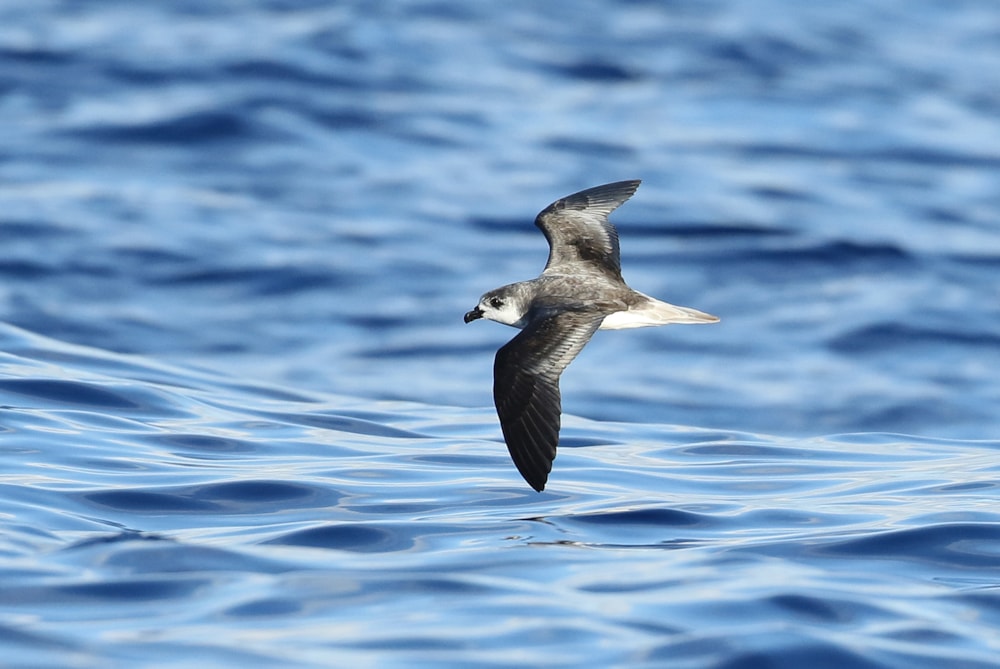 Desertas Petrel breeds only on Bugio Island in the Desertas archipelago, situated off south-eastern Madeira. The species is classified as Vulnerable due to its very small population, which is estimated to be fewer than 1,000 mature individuals.

The team found that the species undertook some of the longest foraging trips ever recorded in any species – some proved to be as long as 12,000 km over deep, pelagic waters.

Francesco Ventura, the paper's lead author, and Oliver Padget, who was also involved in the study, summarised: "Desertas Petrels are really impressive seabirds. The distance of their foraging trips was staggering, averaging 7,800 km over 14 days and, during directed flight, this was facilitated by a mean speed of 33 km/h.

"The most impressive thing, however, is how effectively Desertas Petrels appear to use the wind.

"Our findings show that they fly with a consistent angle to the wind, presumably maximising flight efficiency. Additionally, by comparing real tracks with realistic simulated tracks, we show that the real tracks were significantly faster than all equivalent simulated trips. In other words, the real flight routes were close to the fastest possible, providing strong evidence for the idea that these birds have a prior knowledge of the predictable prevailing North Atlantic wind regimes, implying that they are using knowledge of the windscape.

"Additionally, we investigated whether the routes designed by the animals would have been equally efficient if performed on a different day (1-14 day shift). We found that the routes were the most efficient, but only on the day that they were performed – implying that in addition to having knowledge of large scale predictable wind fields, there must be smaller-scale adjustment of trips to the current and local conditions.

"These mechanisms appear to allow Desertas Petrels to adopt a prey-search strategy that relies on flying long, circuitous routes efficiently using the North Atlantic Ocean's prevailing wind currents, rather than targeting specific foraging hot-spots, which may not always be energetically favourable to visit given the average winds. This is interesting both from a behavioural ecology point of view and a cognitive point of view, since it remains unknown how this knowledge is acquired or stored, processed or used." 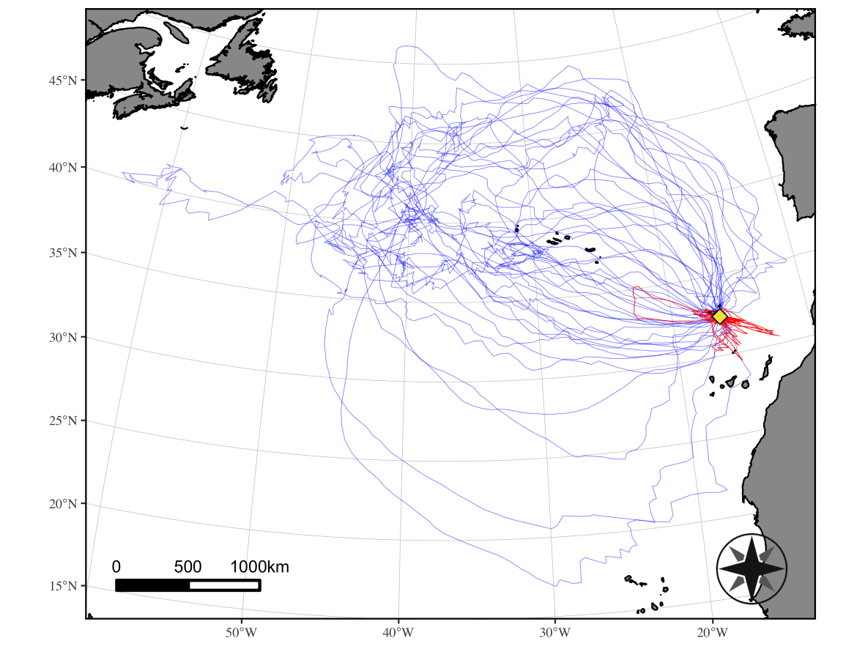 Above: Desertas Petrels' long (in blue) and short (in red) tracks. The yellow rhombus is the breeding colony in Bugio Island. The short trips are limited both in their temporal duration (average duration = 28 hours) and spatial extent (average distance from colony = 119 km) and represent only 13.7% of the total time spent at sea by the tracked petrels. 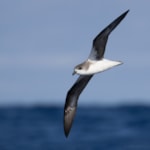