A cryptic new species of bulbul, previously considered to be a variation of a polymorphic species, has been described from Borneo.

Cream-vented Bulbul Pycnonotus simplex was thought to vary in its appearance, more specifically showing either red or white (creamy-yellow) irises. However, mitochondrial DNA sequence comparisons have revealed a startling surprise: the two forms aren’t closely related at all and a new species has been hiding in plain sight.

Comparison of (A) 'Cream-eyed Bulbul' 'Pycnonotus pseudosimplex', which has been found to represent a new species, and (B) the red-eyed Bornean form of Cream-vented Bulbul Pycnonotus simplex.

The newly identified taxon, which has been dubbed Cream-eyed Bulbul Pycnonotus pseudosimplex, has been described from several type specimens across a large area of northern Borneo. As well as differing in iris colour from Cream-vented Bulbul, its plumage is also yellower on the throat and vent, creating greater contrast with the darker breast and flanks.

The two taxa appear to be sympatric, sharing the same mature forest interior and edge habitat. Although previous authors have stated that white-eyed and red-eyed individuals co-occur throughout Borneo, the study suggests that the white-eyed P pseudosimplex is considerably rarer and perhaps more habitat restricted than its red-eyed counterpart. 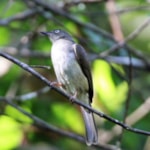