Killer Whales off the coast of Western Australia have been documented attacking and eating Blue Whales, representing the first time such behaviour has been verified.

Researchers from the Cetacean Research Centre (CETREC WA) photographed three separate attacks in waters off Bremer Bay, a regular haunt of a large population of Killer Whales. The animals are known to regularly attack prey as large as beaked whales and Antarctic Minke Whale, but these are the first recorded cases of predation of Blue Whale. 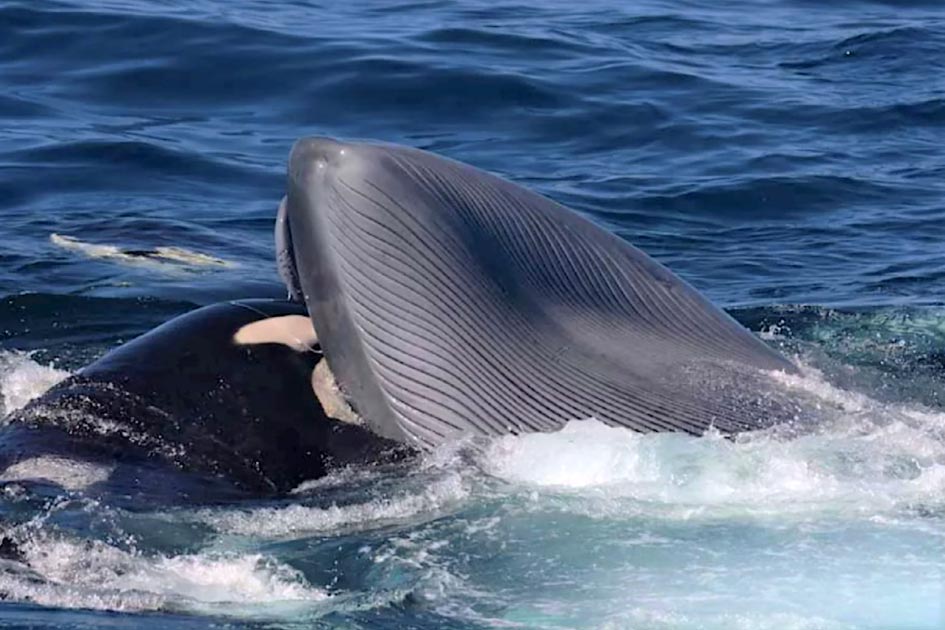 Adult female Killer Whales, such as this one, led the attacks on Blue Whales in waters off Western Australia (J Daw).

The first attack occurred in waters 21 km off the coast on the morning of 21 March 2019. A pod of at least 12 Killer Whales were already attacking the roughly 20-m-long Blue Whale when noticed by observers aboard RV Southern Conquest. The unfortunate victim was still attempting to break free despite its attackers having ripped through to the bone. Just under an hour later it eventually died, after the relentless onslaught led by adult female Orcas. Within a few hours, the kill attracted other Killer Whales, providing rich pickings for as many as 50 animals. Seabirds seized the feeding opportunity, including 200 Flesh-footed Shearwaters, a Black-browed Albatross and a mix of Wilson's Storm Petrels and White-faced Storm Petrels.

Another kill was made just over two weeks later, on 6 April, 25 km west of the first attack. Observers on a commercial whale-watching vessel followed a group of more than 40 Killer Whales to an area where a Blue Whale calf, around 10-12 m in length, was being killed.

The third observed attack took place on 16 March 2021, very close to the site of the second. It was watched from the commercial whale-watching vessel, Steep Point, and the chase (involving 12 Killer Whales) lasted for 97 minutes, in which time the Blue Whale travelled around 25 km. The entire incursion, from first contact to kill, lasted almost three hours. The Blue Whale was estimated to be 12-14 m long and appeared to be a juvenile.