Once in a Lifetime: Long-billed Murrelet at Dawlish Warren, November 2006

Every decade has one: a species so rare and unexpected that birders can not believe that they are watching it in Britain. A set of distant photographs last week probably became amongst the most hotly debated images in British birding history - what would we do without digital cameras and the internet? The realisation that these were of a murrelet species, confidently broadcast by the major news services as the 2nd Long-billed Murrelet for the Western Palearctic, caused despair amongst a birding community who thought a mega had slipped through undetected. For the second time this year it looked as though a species would be admitted to the British list on the basis of belatedly identified photographs. Local birder Kevin Rylands, who runs the Dawlish Warren website, didn't give up hope though - the bird could still be present, couldn't it? 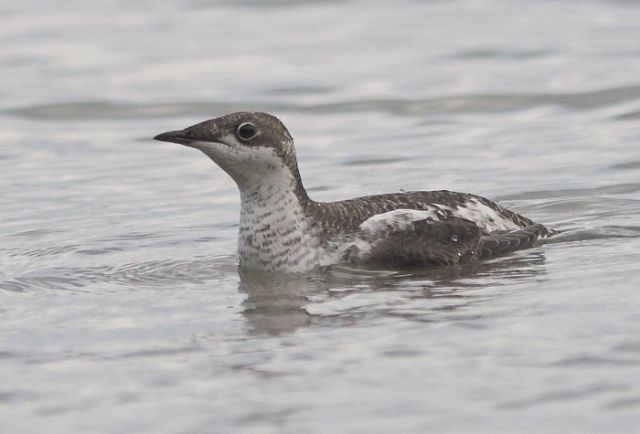 Long-billed Murrelet: Dawlish, Devon There was significant debate about the bird's identity once the images were in the public domain but only Long-billed and Marbled Murrelet were candidates for the bird. With the benefit of the superb images now available, identification is not too complex. However, the original images were purely record shots and some of the features were less obvious. Key features aiding the separation include: small whitish ovals at the side of the nape; lack of white collar; limited dark feathering below the eye; and relatively little blackish extending onto the shoulder (though there is, apparently, some overlap between the two species with respect to this feature). Structural differences, of relatively little use on a lone vagrant, include a larger body mass, longer bill and longer wings. Other features have been cited, but there does appear to be overlap between the two species for some plumage features such as the prominence of the eye-arcs, dark on the head extending down to the gape, and chin colour (photo: Graham Catley).

On Tuesday 7th November 2006, Dave Hopkins discovered what he believed to be a Little Auk swimming close inshore just south of the Langstone Rock at Dawlish Warren (South Devon). The news was released immediately but because several local birders, including myself, had seen Little Auk in the preceding days only few people went to see the bird. One of these was Dave Stone, who managed to get a few record shots of the bird.

Dave Stone submitted his photos to the Dawlish Warren website on the Tuesday as Little Auk - I uploaded them late in the evening and thought they looked a bit odd, but knowing several people had seen the bird in the field I assumed they where just unusual Little Auk pictures.

On Wednesday Dave asked me to take his pictures off the website as he had been convinced he had made a mistake; the bird was a in fact a Guillemot. I then took a closer look at the pictures! I told him it was not a Guillemot and remarked that my money was on Marbled Murrelet - however they were not my photos and so they came off the site.

I did, however, email them to a few people and Marbled Murrelet kept coming up, but the possibility that it was a murrelet was surely too far-fetched. Because they were not my photos I felt I could not post them more widely.

Discussions continued on the Thursday and Dave asked me to put the photos back on the Dawlish Warren website as he felt it had been now been confirmed as a Little Auk. The photos went back on the website on Thursday evening, despite concerns over the identification.

On Friday morning I was able to get to Dawlish Warren for the first time but there was no sign of the bird. By midday, as far as I was aware, the photos had still not been noticed by anybody outside Devon, and there were still several people not happy with the ID.

Therefore it was decided to post the website link on the BirdForum website, as the pictures were now in the public domain, and see what others made of the photos. Within a few minutes it was clear many thought the same: the bird was a murrelet!!! The discussion was down to which species - Marbled, or the recently split (and more migratory) Long-billed. From an average of just 150 hits a day, the Dawlish Warren website recorded 4283 visits on the Friday!

Those questioning the ID and pointing to Marbled Murrelet before the posting on BirdForum included myself, Andrew Stanbury, Ivan Lakin and Chris Townend (who left for Namibia before the bird was relocated!). Mark Bailey had also independently come to this conclusion. 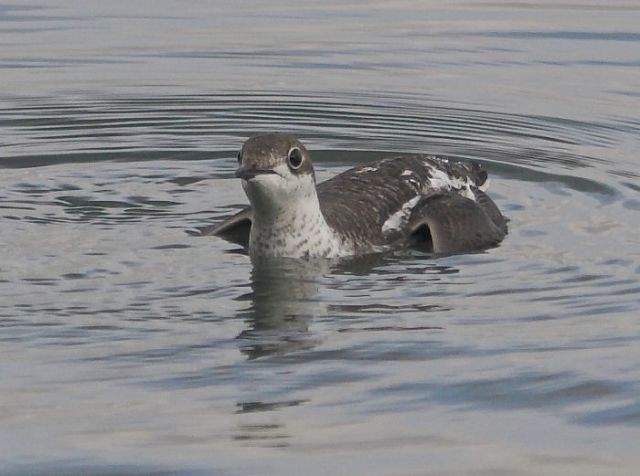 Long-billed Murrelet: Dawlish, Devon Long-billed Murrelet breeds in the Pacific Ocean, from east Kamchatka through the Kurile Islands and Sakhalin Island and along the shores of the Okhotsk Sea south to northeastern Hokkaido, where it is rare. The breeding behaviour of the Long-billed Murrelet is very unusual. It nests inland on the branches of old growth trees, where the single egg is laid on a lichen- or moss-covered branch or hollow. Like Marbled Murrelet, this species is under increasing threat from logging of old growth forests, particularly on Sakhalin island and the Kamchatka peninsula. In winter most of the population is to be found around Hokkaido and northern Honshu, though some have been found further south, and others may winter as far north as Sakhalin Island. In North America, there have been a number of records from far inland or from states on the Atlantic coast of Newfoundland, Massachusetts, North Carolina, South Carolina and Florida. The sole Western Palearctic record was found dead on Lake Zurich in Switzerland, sometime between 15th and 18th December 1997. The route by which the Devon record arrived will no doubt be the subject of much debate - did it come from the east, or the west? (photo: Graham Catley).

Although the bird had been not been seen since Tuesday, the confirmation that the photos were of a murrelet, probably Long-billed, were enough to ensure I undertook a thorough search on the Saturday morning.

At first light, I positioned myself at Rockstone, a good vantage point midway between Dawlish Warren and Dawlish town. The initial 40 minutes failed to even produce an auk, but I eventually located a small bird off Coryton Cove, Dawlish about one mile away. It looked odd, like a black-and-white Little Grebe, and I felt it was the bird.

I was too far away, so I quickly drove around to Dawlish and after a few minutes managed to relocate the bird, about 100 yards offshore. Panic instantly set in - it was the murrelet. I had to get someone else on the bird. I phoned Ivan Lakin, who I knew was on Langstone Rock (and the only other person out checking the bay!), and asked him to get there ASAP. 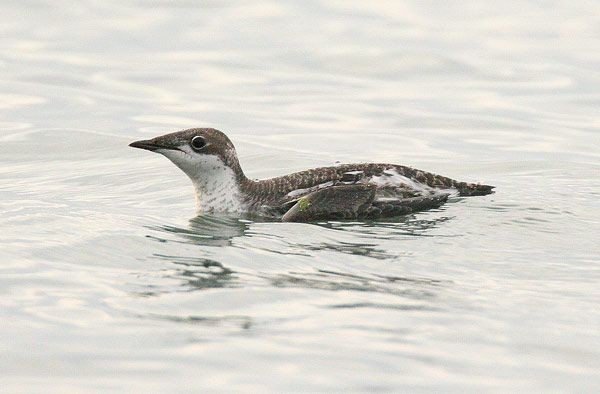 I was shaking too much to try and confirm the Long-billed ID; I had trouble just trying to stay with the bird in the scope. Eventually Ivan arrived and confirmed I wasn't seeing things and the news was put out at 8.39am.

Locals soon began arriving; one of the first was John Fortey, who confirmed it was the bird he'd seen on Tuesday, albeit much closer and in far better light. I wandered around in a state of shock for most of the morning, occasionally checking with people that we weren't all making a horrible mistake!

The bird performed superbly for several hours, remaining close in and allowing excellent photographs to be taken. During the day, it swam strongly out to sea on several occasions but always returned to its favoured feeding areas. 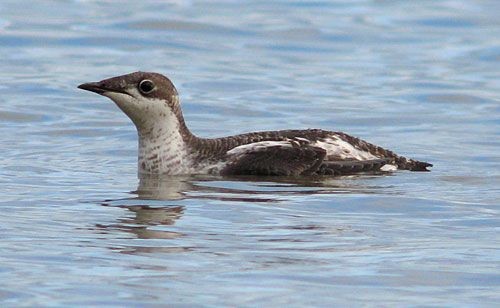 Long-billed Murrelet: Dawlish, Devon 1st-winters are similar to adults, but the underparts are speckled with blackish-brown spots and they are more brownish above, with the difference between dark and white not as crisp as for adults (photo: Steve Blain).

Because the bird was found so early on a Saturday morning, large numbers of birders were able to get to the site before dark. During the course of the day over 1,000 people must have arrived, the accent of the crowd changing as the day went on from Bristol to south Wales, Midlands, Manchester and finally North-east. Dawlish coped well with the influx, with no problems arising with viewing or parking and welcome unseasonable trade in the local cafés.

Speaking to several local people, it transpired that what was no doubt this bird had been around Coryton and Boat Cove for several days but they thought that it was a young Guillemot. It relocated back to Dawlish Warren on the Sunday morning, providing a very welcome patch-tick for several observers, before moving back to Dawlish where it remains at the time of writing. 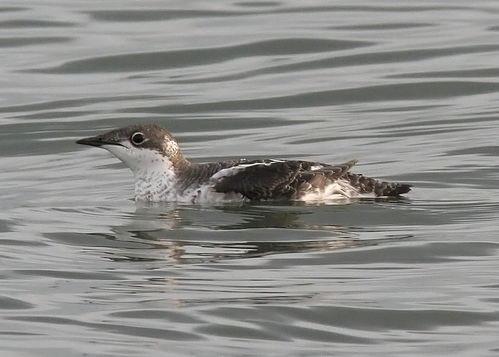 Long-billed Murrelet: Dawlish, Devon There is no evidence of long-distance vagrancy for Marbled Murrelets, which largely winter within their breeding range, so identification as Long-billed was more likely based on probability. But as has been proved time and again, birds have scant regard for statistics (photo: Nic Hallam). 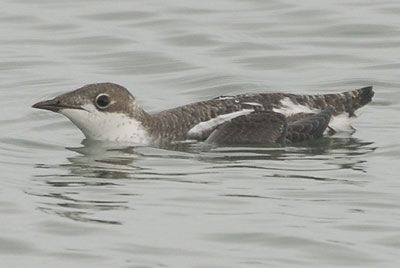 Many people twitching the Long-billed Murrelet may like to take the opportunity to also see Devon's speciality bird, the Cirl Bunting. Following the success of the RSPB Cirl Bunting Project in reversing the species' fortunes there are several accessible locations around south Devon where Cirl Buntings can be found and detailed information on these sites is on the RSPB website at:

The Cirl Bunting recovery would not have been possible without the RSPB working closely with landowners in south Devon to manage land for the benefit of Cirl Bunting and other farmland wildlife. Please can visitors keep to public rights of way so as not to jeopardise these relationships with landowners.